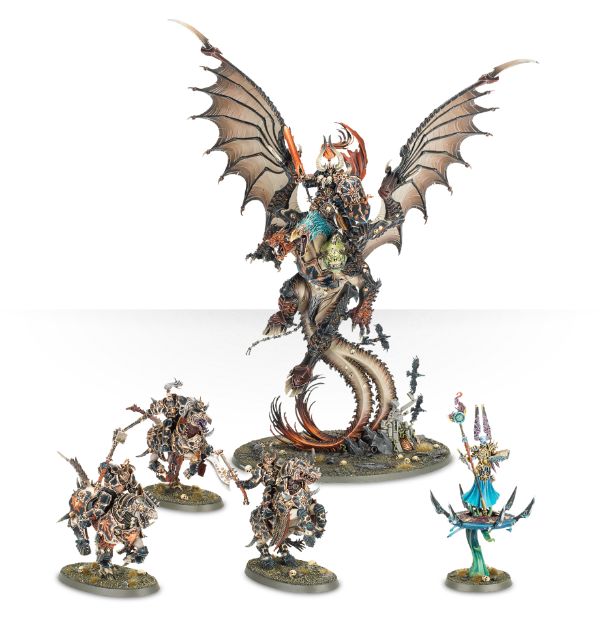 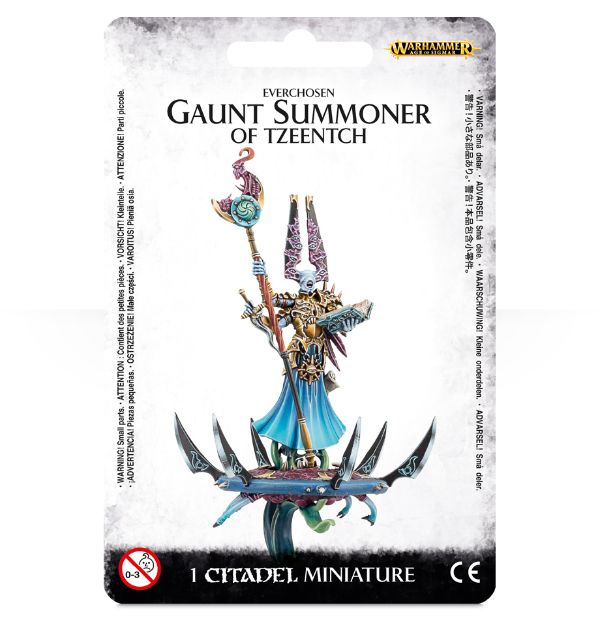 Originating from deep within the Realm of Chaos, the Gaunt Summoners are powerful daemon sorcerers of Tzeentch. Archaon exerts an iron grip upon their souls – they are not only favoured by the Everchosen for their abilities, which are prodigious, but for their helpless devotion to their masters’ twisted whims. Able to twist reality with their dread incantations and engulf whole armies in deadly warpfire, the Gaunt Summoners were responsible for some of the most horrifying atrocities committed during the Age of Chaos. 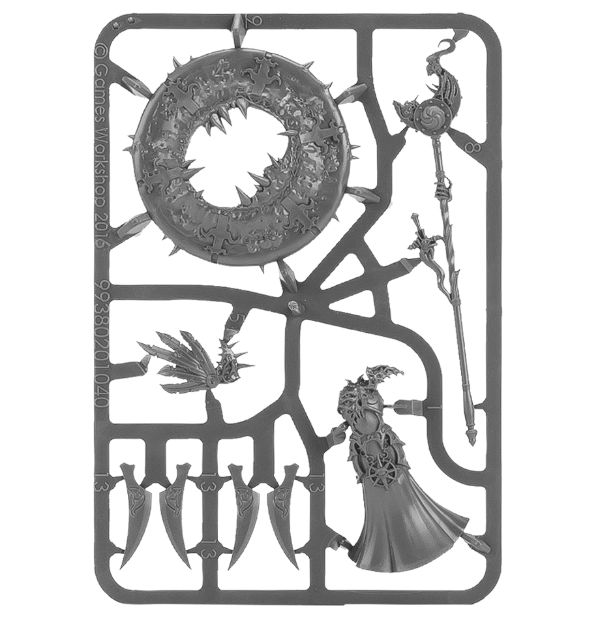 Only nine of these bizarre, faceless creatures exist at any one time, and it is an exceedingly rare event to see more than one appear at any time – it is a testament to their power that a single Gaunt Summoner can change the tide of battle completely. 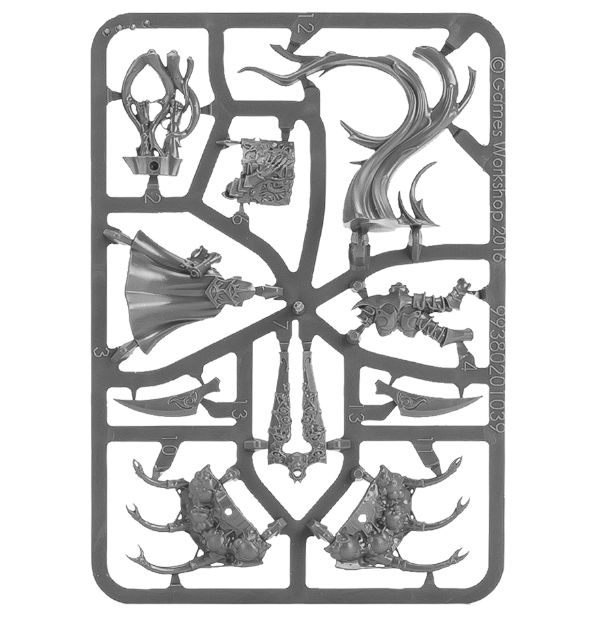 This multi-part plastic kit contains all the parts necessary to construct one sinister Gaunt Summoner, riding a disc of Tzeentch. Wielding a Changestaff and a Warptongue Blade, this detailed model is borne aloft on a wave of magic, held fast to his Disc by eldritch tentacles and features a book and scroll from which his incantations originate. The Disc comes with six Blades. Eighteen components in total, with a Citadel 40mm Round base. 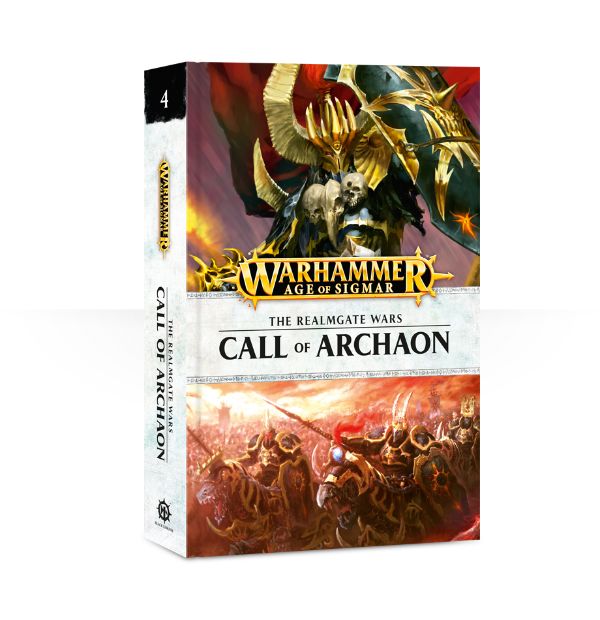 THE STORY
Of the many champions of Chaos, none are as great or as feared as mighty Archaon. He is the Everchosen, Exalted Grand Marshal of the Apocalypse and Ender of Worlds, and it is a worthy warrior indeed who can fight by his side. Such Knights of Ruin are known as the Varanguard. Only by answering the call of Archaon can a warrior of Chaos ascend to their ranks, and acceptance is never guaranteed, for their mettle must first be proven. In this dark tale, three fell champions of the Chaos Gods all heed the call of the Everchosen. Each desires the ultimate prize: to become part of the Varanguard. But where one is chosen, others will fail, for Archaon’s will is cruel and his trials exacting…

READ IT BECAUSE
It’s the whole epic Call of Archaon saga in one book. See what trials the followers of Chaos must undergo to prove themselves worthy of the ultimate honour: joining the ranks of the Everchosen’s Varanguard. It’s brutal, bloody and with three (anti)heroes, there’s no way they’re all succeeding… or surviving. 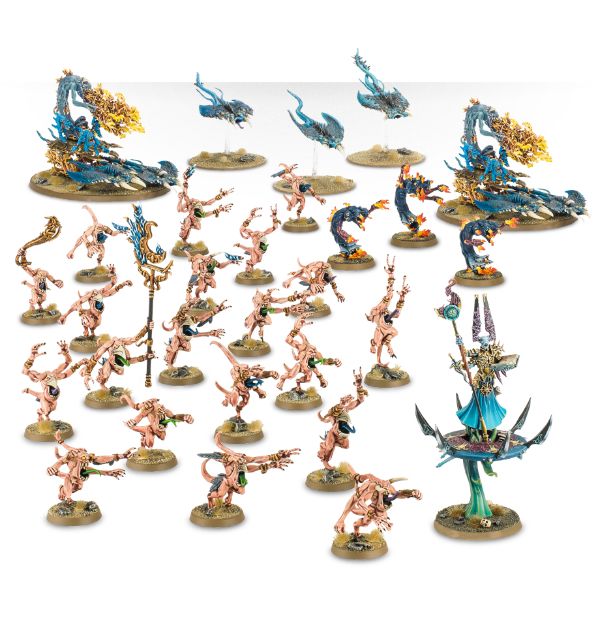 Surrounded by a writhing, coiled mist of multi-hued magic, the Gaunt Summoner glides across the battlefield upon his strange Disc of Tzeentch. Wielding the Book of Profane Secrets, he summons forth a collection of bizarre and powerful daemons from the Realm of Chaos to do his bidding, sending them into the fray while casting his own arcane spells upon the hapless foe. 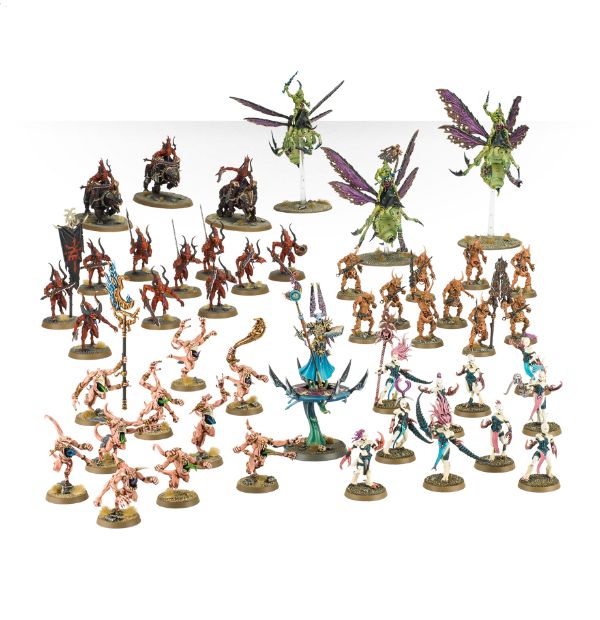 Surrounded by a writhing, coiled mist of multi-hued magic, the Gaunt Summoner glides across the battlefield upon his strange Disc of Tzeentch. Wielding the Book of Profane Secrets, he summons forth a collection of bizarre and powerful daemons from the Realm of Chaos to do his bidding, sending them into the fray while casting his own arcane spells upon the hapless foe.

This is the death of worlds. Archaon, the greatest champion of the Dark Gods, sees all and destroys all. Were this not enough to spell doom for anything that catches the dread attentions of the Exalted Grand Marshal of the Apocalypse, he is accompanied by a Gaunt Summoner – a powerful daemon sorcerer held in thrall to Archaon’s terrible whims – and a unit of Varanguard, the brutal, mounted murderers well-known to take a malign glee in executing the dark will of their master.

This bundle supplies you with everything needed to field the Overlords of Chaos, a Warscroll Battalion found in Battletome: Everchosen. You’ll receive the imposing form of Archaon, a Gaunt Summoner and a unit of three Varanguard – the ultimate collection of Everchosen might!

Those are some MASSIVE bundles for demons – although is it strange that he’s coming with the Khorne Demons. Then again, Archaon has pretty much bent all the Chaos God’s to his side and squashed their petty bickering (at least while he’s in the room…)

What’s your take on the new Gaunt Sorcerer Model? How about those Rules?

Author: Adam Harrison
Writer, Editor, Texas Native, and Austinite for 15+ years, Adam covers all things Tabletop Gaming. Which includes Warhammer 40,000, Age of Sigmar, D&D, Board Games and everything else that involves dice, boards, cards and a table. A hobbyist, player, and collector of miniatures and games, Adam's current obsession are his Death Armies for Age of Sigmar, his Blood Angels and Tyranids for 40k, and his ever growing Arkham Horror: The Card Game Collection.
Advertisement
Age of Sigmar Miniatures Tabletop News Warhammer Fantasy Warriors of Chaos
Advertisement 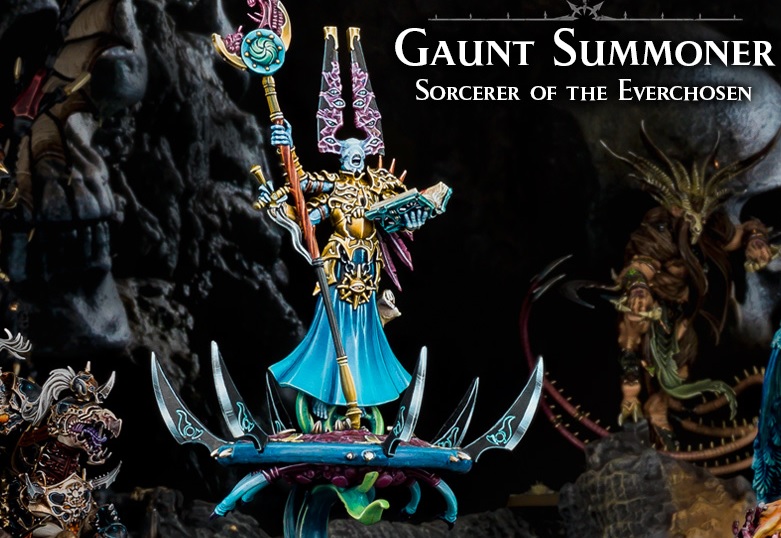