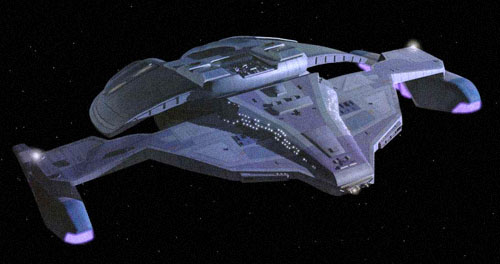 A Jem’Hadar ship captured by Captain Sisko is coming soon.  Take a look at Wave 21’s “The Robinson” 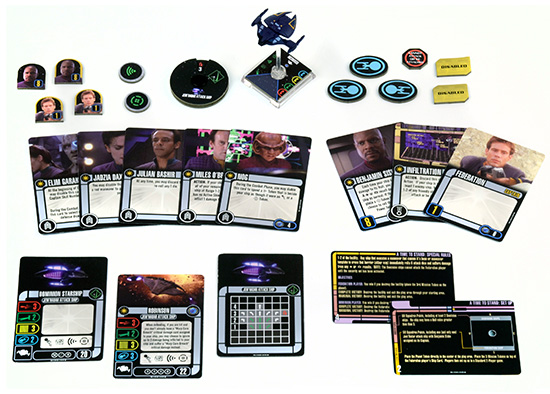 “Discovered on Torga IV while Captain Sisko and members of his landing party were conducting a planetary survey, the derelict Jem’Hadar ship was claimed by the Starfleet officers by right of salvage. …Once the Jem’Hadar attack ship was returned to fill functionality, it was christened the “Robinson” and charged with a dangerous mission behind enemy lines. A mission so secret, that not even other Starfleet vessels know the identities of the Robinson’s crew or its task, easily mistaking it for a solitary Dominion attack ship.”

“The Robinson is converted into a Federation ship by adding one extra Shield and three extra Crew Upgrade slots while losing one Tech and one Weapon Upgrade slot. The Robinson’s special ability is a true gambling man’s dilemma. When defending, you may ignore up to 3 damage inflicted to your ship if you choose to suffer a “Warp Core Breach” critical damage instead. Depending on how lucky you feel, suffering a “Warp Core Breach” might be a small price to pay if you can keep the Robinson around for one more round. As you would expect, Benjamin Sisko is Captain of the Robinson. This time Sisko has a level 8 Captain skill and a special ability that will make your opponents think twice before attacking your ship. Each time your ship suffers 1 or more damage to its Hull, you may roll 1 attack die. A hit or critical hit result damages the attacking ship as normal. If the result is a battle stations, place a Battle Stations Token beside your ship. If you choose to roll this die, place an Auxiliary Power Token beside your ship. “ 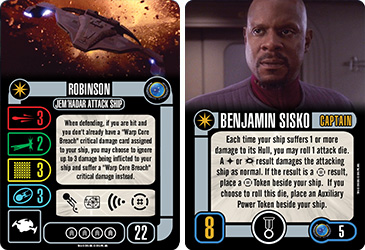 The Robinson is due out this month by NECA/WizKids.