How an FLGS Succeeded with Age of Sigmar

One big FLGS says they have successfully built a thriving Age of Sigmar community.  Here’s their rules that did it!

Dragon’s Lair Comics & Fantasy is one of the top 10 gaming stores in the nation, located in Austin TX.

They tell BoLS that they have successfully jumpstarted a thriving Age of Sigmar community using this set of homebrew narrative league rules.

Dragon’s Lair told us that initial attempts to put together a competitive tournament based system as used for every other game out there (40K, X-Wing, Warmachine, etc…) fell flat on it’s face, but when a recurring monthly narrative based system was drawn up, it drew in the Age of Sigmar players like a moth to a flame.

They have even seen their rules handed out to other FLGS to help them jumpstart Age of Sigmar communities.

Take a look and let us know what you think. 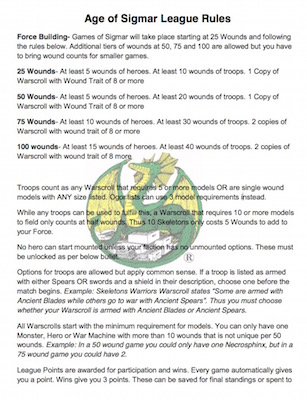 Sample page from the rulespack

Maybe those crafty folks at Dragon’s Lair successfully have cracked the Age of Sigmar code (from a retailer’s point of view).