Battlefleet Gothic ARMADA is rolling out the deals. There is a special early adopter deal on STEAM right now, and a sexy new trailer! 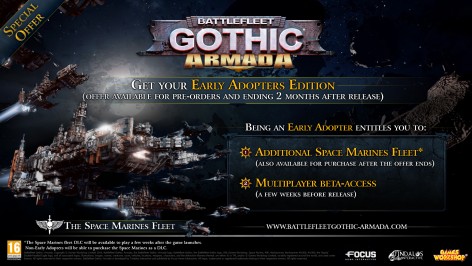 “We are thrilled to announce the beginning of pre-orders for Battlefleet Gothic: Armada!

In order to reward the commitment of players who will support us during the pre-order phase, and those who will join the community during the first couple of months following the game’s launch, we decided to offer to these early adopters, for free, an additional faction – the Space Marines – which will be available to play a few weeks after launch.

This additional faction will be playable in battles played in both Multiplayer modes and in skirmish against the AI. Players who pre-order the game will also receive access to the Multiplayer Beta, that will start a few weeks before the official launch.

Finally, we would like to remind you that until Friday evening, Games Workshop has a place of honour on Steam with exceptional discounts. This is the perfect opportunity to pre-order Battlefleet Gothic: Armada (10% off).”

It looks like the game will ship in March, but in addition to a 10% discount, early adopters will get the Space Marine faction for free as opposed to paid DLC.

Admirals report to the bridge!