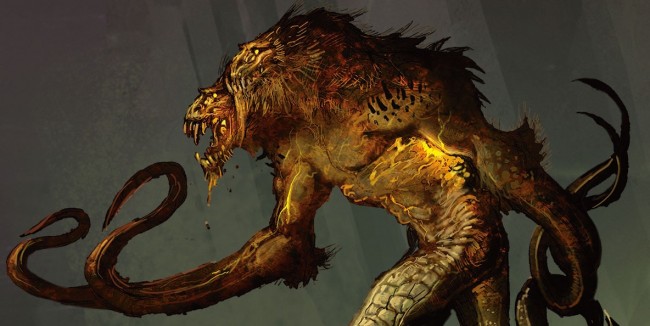 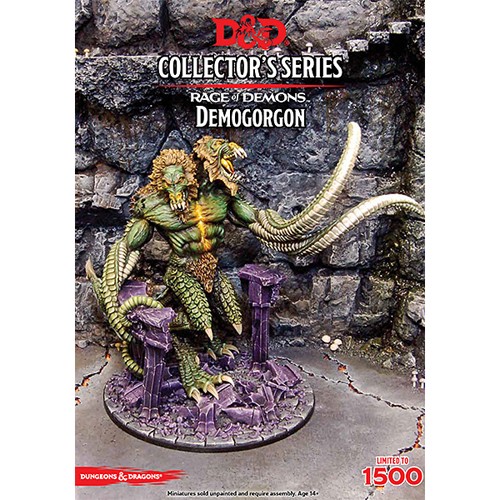 The Tabletop Spotlight is on the D&D Collector’s Series: Demogorgon!

Hey BoLS Readers, we’re back with another Tabletop Spotlight and this time we’ve got one of the D&D Rage of Demons Collector’s Series models – Demogorgon! Our Friends from Dragon’s Lair Comics & Fantasy brought this Limited Edition model over so I was thrilled to get to take a peak inside the box of this Multi-tenticled Baddie from the D&D Universe!

This fully resin kit from Gale Force Nine was really well done. This model is massive and the base matches it’s stature – plus it’s already got a ton of scenic debris all over the place, so that was a nice touch. The details were great – just as you would expect from resin and the experienced casters from Gale Force Nine. As part of the D&D Collector’s Series, I think this model is a standout! As a big collector’s piece/center piece I think this kit is really well done and a little intimidating to paint! If I was going to pick up one of these models I would seriously consider getting it painted by a professional studio or I’d probably go crazy trying to get it finished up to a “showcase” standard.

Demogorgon seeks to corrupt all that is good and undermine order in the multiverse, to see everything dragged howling into the infinite depths of the Abyss.

The demon lord is a meld of different forms, with a saurian lower body and clawed, webbed feet, as well as suckered tentacles sprouting from the shoulders of a great apelike torso, surmounted by two hideous simian heads, named Aameul and Hathradiah, both equally mad. Their gaze brings madness and confusion to any who confront it.

Similarly, the spiraling Y sign of Demogorgon’s cult can inspire madness in those who contemplate it for too long. All the followers of the Prince of Demons go mad, sooner or later.

So what do you think? Do you have what it takes to take on Demogorgon – either as part of an adventure or as a painting challenge? Let us know your take in the comments below!

Author: Adam Harrison
Writer, Editor, Texas Native, and Austinite for 15+ years, Adam covers all things Tabletop Gaming. Which includes Warhammer 40,000, Age of Sigmar, D&D, Board Games and everything else that involves dice, boards, cards and a table. A hobbyist, player, and collector of miniatures and games, Adam's current obsession are his Death Armies for Age of Sigmar, his Blood Angels and Tyranids for 40k, and his ever growing Arkham Horror: The Card Game Collection.
Advertisement
Dungeons & Dragons Gale Force 9 Miniatures Tabletop Spotlight Wizards of the Coast
Advertisement