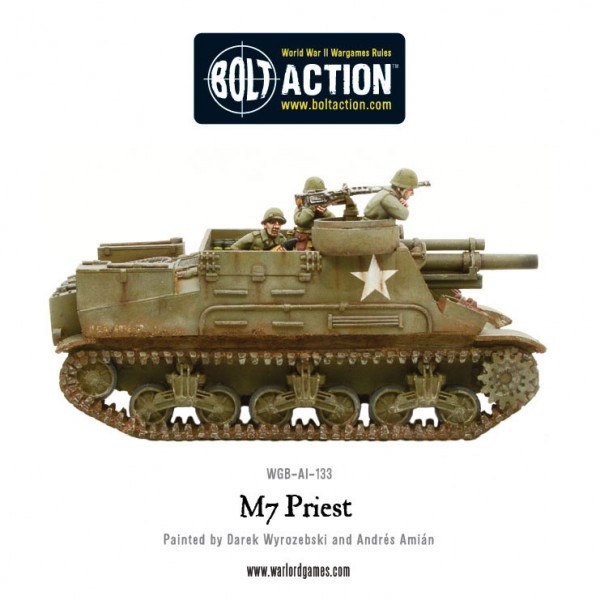 Warlord brings in the M7 Priest HMC – Someone call for some Artillery support?!

There is no better artillery than the MOBILE kind! The M7 brings the BOOM to your Bolt Action Games.

Rumbling onto the battlefield comes the M7 Priest, the workhorse of the motorised artillery units, bringing unparalleled close fire support to the US and British armies: 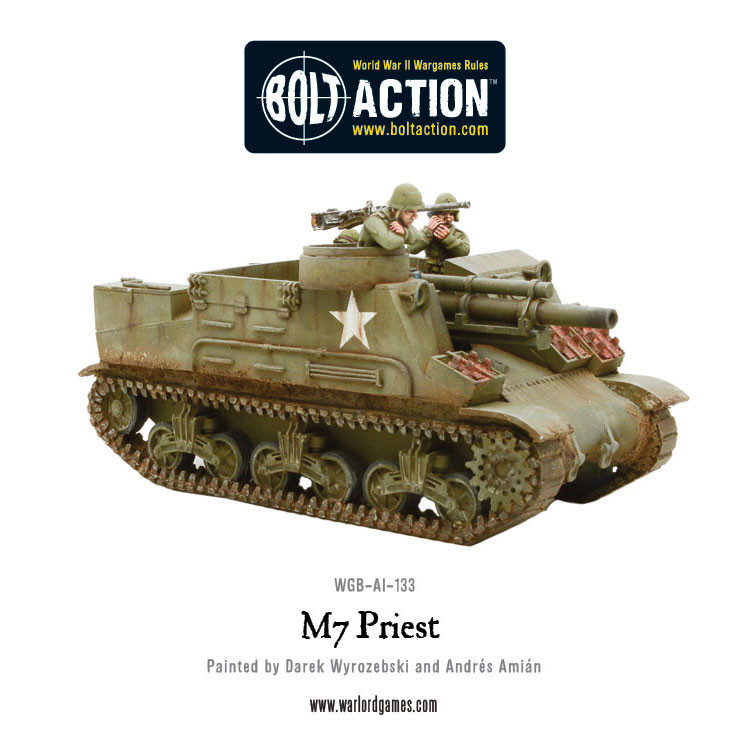 In 1941 a converted prototype, the T32, based on the early M3 Lee chassis was chosen to test mount the US armies new M2 105mm Howitzer. The T32 was modified with an open-topped superstructure, mounting a 105mm howitzer and a M2 Browning machine gun fixed into a front-left tower. This gave an excellent arc of fire, while the howitzer was placed offset to the right. This characteristic was noted by the British and duly dubbed “Priest”, because of the pulpit-like MG emplacement. Once accepted for service in February 1942 as the M7 105mm Self Propelled Gun, production started immediately. During production, the chassis was shifted from the M3 to the M4 for standardisation. In British service, some M7s carried a radio set, which took the place of 24 rounds of ammunition. While the first M7s were produced for the U.S. Army, some were diverted to support the British in North Africa. Ninety M7s were sent to the British Eighth Army in North Africa, who were also the first to use it in battle during the Second Battle of El Alamein alongside the Bishop, a near obsolete self-propelled gun based on the Ordnance QF 25-pounder.

The British continued to use the M7 throughout the North African and Italian campaigns. The three assault infantry divisions (3rd and 50th British, 3rd Canadian) that landed on Sword, Juno and Gold beaches on D-Day had their artillery regiments equipped with the M7. The M7 was also used in Burma, and played a significant part in the Battle of Meiktila and the advance on Rangoon in 1945. In U.S. service, the M7 was a great success. During the Battle of the Bulge, each U.S. armoured division had three battalions of M7s, giving them unparalleled mobile artillery support.

This kit expands on your Self Propelled options for your Bolt Action armies and is the perfect addition to our new range of winter Americans! The M7 Priest – putting the ORDNANCE in Co-ORDNANCE!

Author: Adam Harrison
Writer, Editor, Texas Native, and Austinite for 15+ years, Adam covers all things Tabletop Gaming. Which includes Warhammer 40,000, Age of Sigmar, D&D, Board Games and everything else that involves dice, boards, cards and a table. A hobbyist, player, and collector of miniatures and games, Adam's current obsession are his Death Armies for Age of Sigmar, his Blood Angels and Tyranids for 40k, and his ever growing Arkham Horror: The Card Game Collection.
Advertisement
Bolt Action Historicals Warlord
Advertisement 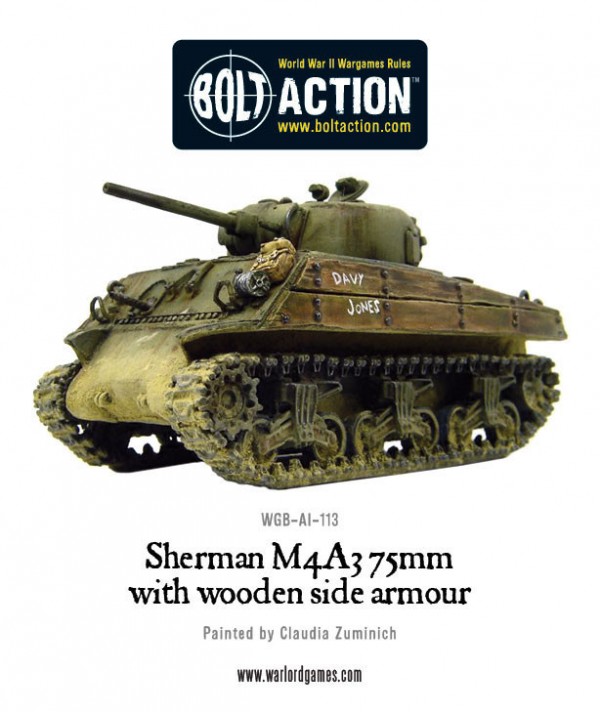