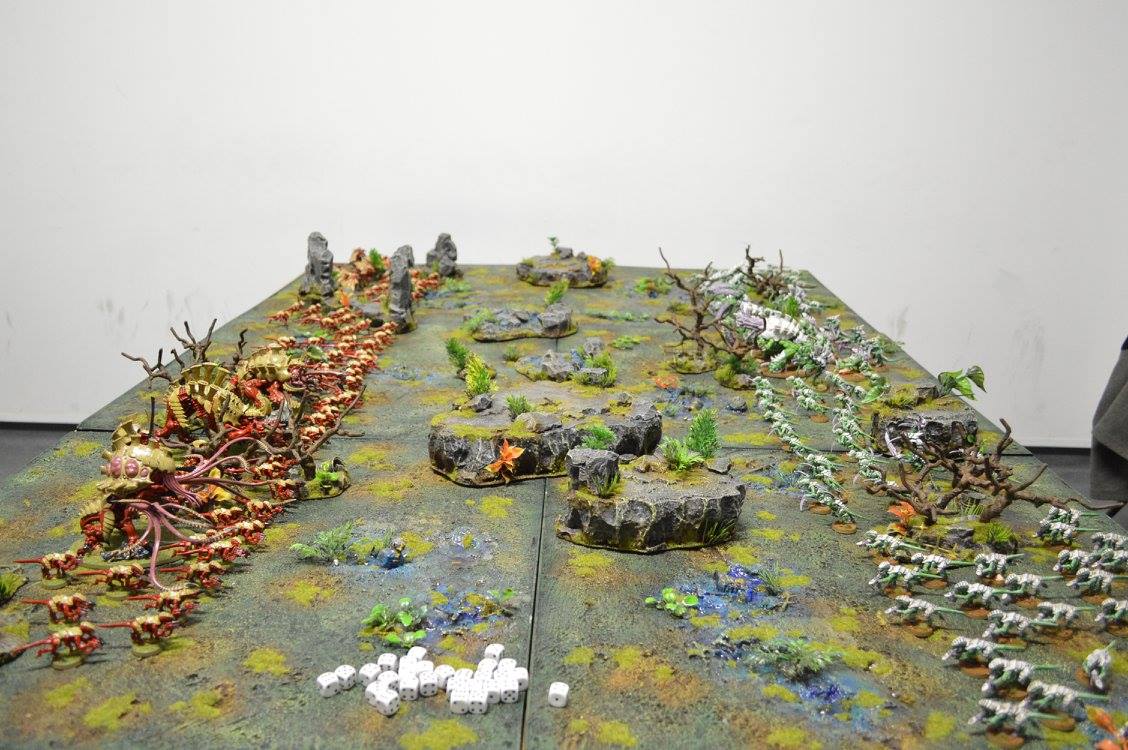 SN Battle reports brings you another great battle report! Its a Nid on Nid battle!

Lets get ready to rumble!!!! Firstly awesome, beautiful, and an amazing new board by STUDIOLEVEL, perfect for this very anticipated battle we have had planned for over a year! Yep you hear that right, we had been dreaming of this game for about a year now….. Haven’t you ever wanted to see a Nid on Nid nom-mathon report? NOM NOM NOM Well stop what your doing it’s here! and we just couldn’t wait to start! Lets do this…

Just had to again point out and take a snap of the brilliant attention to detail these guys at Studio Level have on their boards. From the greenery, to the water features, it’s all amazing and professional and also perfect for this Tyranid report. Make sure you check them out www.studiolevel.com.pl

Ok so after rolling off its Dave that wins and opts to go First…. We roll for night fighting but a 2 is rolled so no extra cover for Julian this turn sorry mate. Dave deploys his minty green gorgeous nids first and what a sight as they all get ready to run across the battle field.

Julian’s turn now and another gorgeous sight to behold as his army deploys as close to the dawn of war deployment zone as possible.

Wow one of the best sights we have seen on SN Battle Reports, don’t you think!? Epic is an understatement and after Julian miserably failing to steal initative on a 2, it’s off to Dave’s turn one. Everybody at the Studio feeling like it’s Christmas at the moment…… Uuuuh I’m sooo excited!! Bets anyone? Who will win Nids or Nids? I bet the Nids will win… (but what if its a draw?)

Turn 1 (Green Tyranids) here we go….. Dave starts his movement phase and guess what, he moves everything forward…. lol

Turn 1 (Green Tyranids) Dave makes sure his Carnifexes are leading the charge, so that they are in optimal range for their 24 twin linked S6 devourer shots… Ouch!

Turn 1 (Green Tyranids) The Green nids line up ready to release a barrage of fire to weaken Julian’s army for if, or tbh when, they manage to get in combat. Just imagine that sight!

Turn 1 (Green Tyranids) The biovores initialise the start of the firing, by indirectly barraging the unit of spinefist termagants, who were screening the toxicrene. The shot was successful and they managed to kill 11 teramgants and wounding the toxicrene.

Turn 1 (Green Tyranids) Dave’s exocrine fires next at the haruspex and gets in 3 wounds. Julian successfully saved only one of them, due to cover saves, leaving the Haruspex with 3 wounds.

Turn 1 (Green Tyranids) This is where the pain really can happen. The two devourer carnifexes have their sight on a unit of termagants directly in front of them. It could also be an easy first blood for Dave if he can wipe them out in one volley.

Turn 1 (Green Tyranids) Despite only failing one the devourer hits, after rerolls, they managed to only kill 16 of the unit of 17 termagants… Only… yeah… Julian knows that if he has any chance of success, he would need to find a way to deal with them fexes before they rack up enough kill points themselves.

Turn 1 (Green Tyranids) The final termagaunt was in range of the warriors venom cannon. After an unsuccessful cover save, it granted the green nids a kill point, but maybe even more importantly, first blood! The remaining of Dave’s units spent their turn running closer to their prey.

Turn 1 (Red Tyranids) Julian opted for the same strategy as their opposing hive fleet. That being getting them as close to the enemy as they can to hopefully be in nom nom nom range.

Turn 1 (Red Tyranids) Julian moves up his Shrikes so that the large unit of hormagaunts remain in synapse. The rest of the army was held in synapse by the Hive Tyrants extended range granted to him by the Norn Crown.Quite a risky method of play to have the only two synapse creatures on either end of the table.

Turn 1 (Red Tyranids) The shooting phase begins and Hormagaunts and Shrikes choose to not make any run moves as they hope to make an epic charge later. Will it have been the right decision to make, or a grave mistake, we shall see.

Turn 1 (Red Tyranids) The Tyrannofex fires his acid spray to whittle to down Dave’s Hormagaunts a little bit, killing off six of them at once. The hive guard then attempted to fire at the exocrine, but failed to inflict any wounds.

Turn 1 (Red Tyranids) With Julian’s shooting phase over, he concentrates in trying to get in combat with his left flank. But was that charge roll enough?

Turn 1 (Red Tyranids) Yes it was! And the tide of red gaunts sprint up the field in a ravenous frenzy to shred as many termagants as possible. However, his Shikes were not as lucky with their charge attempt, and are now exposed since losing their screening.

Turn 1 (Red Tyranids) That is a scary sight to be on the receiving end of! The red Hormagaunts managed to wipe out the whole front half of the unit. That left Dave’s termagants out of range to return any attacks. The unit still remained to stay in combat after their pile in moves.

Turn 2 (Green Tyranids) Dave begins to move up his own blob of hormagaunts, plus Tyranid Prime, to hopefully return the favour later. Look at this view I’m so happy!!

Turn 2 (Green Tyranids) The Carnifexes move up and have their sights on the newly exposed Shrikes. This could potentially be catastrophic for Julian if he loses the synapse keeping the red Hormagaunts together.

Turn 2 (Green Tyranids) Dave’s Zoanthrope and Nuerothrope have to sit tight because they are unable to move from Julian’s unit who have managed to bubble wrap them, whilst they are in the middle of their combat.

Turn 2 (Green Tyranids) With the movement phase over, Dave starts by unleashing a devastating amount of shots at the Shrikes in the hope to kill as many as he can, to remove any synapse on that front.

Turn 2 (Green Tyranids) With that one unit, he was able to kill off four Shrikes at once, while leaving another wounded. Ouch! That must have really hurt Julian. …wait is that a tear?

Turn 2 (Green Tyranids) Dave focuses his Biovores on the red termagants in an attempt to lessen their numbers in case he chooses to assault them later. Very risky considering his hormagaunts are right next to them, but hey, I suppose they are just gaunts after all eh?

Turn 2 (Green Tyranids) The green Exocrine uses his extra ballistics skill from forfeiting his movement to try and secure a kill against the Haruspex. But somehow Dave managed to whiff his rolls completely and the Haruspex was left untouched this time.

Turn 2 (Green Tyranids) Dave has had enough of that Haruspex and launches his unit and warlord into an assault. The grasping tongue failed to overwatch and the green tyranids where in!

Turn 2 (Green Tyranids) Dave’s warlord strikes first, and he managed to secure a six to wound on the bonesword, which insta-killed the haruspex before anything else got to attack.

Turn 2 (Green Tyranids) The hormagaunts consolidate and spread out as much as they could from the impending acid spray that awaits them from the tyrannofex.

Turn 2 (Green Tyranids) Julian wipes out the remaining termagants and are now again free to charge and also got to consolidate back into synapse. Not good for the green nids next turn.

Turn 2 (Red Tyranids) Julian moves his Hive Tyrant so that he has a chance to cause instant death on the green Warriors with his heavy venom cannon.

Turn 2 (Red Tyranids) He then moves his Hormagaunts so that they are in charge range of Dave’s entire right flank.

Turn 2 (Red Tyranids) The red gaunts and Tyrannofex fire into the hormagaunts lowering their numbers by just a few.

Turn 2 (Red Tyranids) Julian’s Toxicrene fires his ignore cover, poison blast at the green gaunts, to once again reduce their numbers from the impending charge.

Turn 2 (Red Tyranids) The two units of Hive Guard fire at the Vemonthrope and Exocrine.To which they managed to insta-kill the Venomthrope with their ignore cover, and cause two wounds on the Exocrine. Julian definitely can’t complain about that.

Turn 2 (Red Tyranids) The Hive Tyrant fires his heavy venom cannon at the warriors for some more double strength, instant deaths. He fails to hit miserably, and the blast scatters off to the friendly Hormagaunt unit next to them, killing off three at once. Woops!

Turn 2 (Red Tyranids) The red Termagants and Tyrannofex charge in to tie up the Hormagaunts and warlord.

Turn 2 (Red Tyranids) The green Carnifexes overwatch the charging hormagaunts, but there were too many of them from even getting close to stopping the assault.

Turn 2 (Red Tyranids) In one crazy immense assault charge, Julian still manages to not only tie up the Carni’s, but the Zoanthropes, Venomthrope and Warriors too!! Madness!

Turn 2 (Red Tyranids) Julian’s Shrikes also managed to join in the madness and assault the zoanthropes. With most of Dave’s units bogged down in assaults, the red Tyranids are exactly in the position they wanted to be in, but will it hold out?