This is an exclusive Warhammer World item which features the Land Raider Excelsior and the Rhino Primarus. The Rhino is like the Damocles Command and Control Rhino but with more plastic bits. It’s got lots of options for dudes on top and bits and bobs to trick it out. It’s a gorgeous kit with tons of options. My friend Greg Steiner let me borrow his kit so I’d be able to share this with you guys. 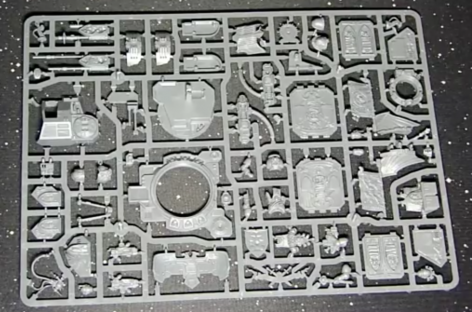 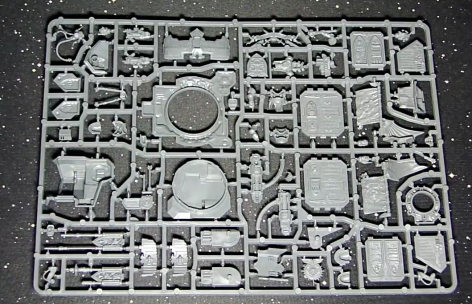 This is a two kit box with lots of little details; even the box itself has little touches that make it special. Each pull tab, either says excelsior or primaries depending on the side of the pull tab. This is an expensive kit and what I like about it is the full color manual that also comes with it. Of course you get the two vehicles in this box; which take up the majority of the box. The key component is the upgrade sprue which includes a data auger, ultramarine doors which are reversible, an orbital array, a sensor array, and a twin-linked plasma gun round out the major components. However, there’s also a ton of other little bits and doodads included in the sprue. The upgrade sprue itself is huge and well designed.

You get the two accessory sprues which came out with the Rhino in 1999;  everyone has seen a Land Raider and a Rhino so I won’t go into much detail about that. The box contains the same Sprue’s you’d get in their respective kits but in the manual you can see they rescanned the sprue in 3D which I think is kinda neat.

Speaking of the color manual, it explains the doctrines, if you can call it that, on how the units work on the battlefield. The kit also includes the 400 point data sheet to field both units together. As expected, the two units  have the normal armor profile. The Data Augure is kinda cool, when the Excelsior is within 24” it of the Primaris it adds 1 to it’s ballistic skill; it’s not twin linked but WS5 is always nice to have. The Aquilla Aegis Field confers a 6+ invaluable save in addition to the model with the aegis has ignores crew shaken and crew stunned; wow they should put these things into normal rotation. The Land Raider is still an assault vehicle and it still can split fire it’s weapon, thanks to Power of the machine Spirit, which is cool because you have the big grav gun up front. The Land Raider can transport 10 and has all the usual Land Raider access points along with the hull.

The Rhino comes with a twin-linked plasma gun, a search light, and smoke launchers and also comes with the orbital array; like the old Damocles. The Rhino can call in an orbital alpha strike, strength 10 ap 1, infinite range, ordinance 1, massive blast, one use only, and orbital; so if the arrow is rolled it scatters the full D6 regardless of the ballistic skill. If you can manage to get ignore cover on that, that would be pretty swell. The Rhino also has a servo skull hub, which, at the start of your shooting phase, allows you to select a unit and grant it one of the following:

Pro Tip: Speaking of Fearless, And They Shall Know No fear isn’t the same as Fearless, don’t forget if you can double break a Space Marine unit in the subsequent phases you can still make them fall off the board. 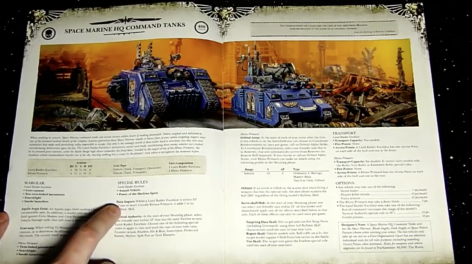 As for the rules, The Excelsior and Primarus have either the Space Marine, Blood Angel, Dark Angel, or Space Wolf Faction, takes up one slot in the Force Org chat but  is otherwise an individual units for all other purposes.

In the manual, you can take a closer look at how it all goes together thanks to the CAD images. The top cupola is a bit reminiscent of the Baneblade, it shows you the cupola with the turret and the relay with the USB like hub in the back that locks into the back of the orbital relay. The guy looks cool in there but I’m not really digging it.The Landraider again, redone in 3D design, shows you the cupola and the ultramarine flag with the double sided doors with the front plate to make it more honorific and also comes with the command bits as well. 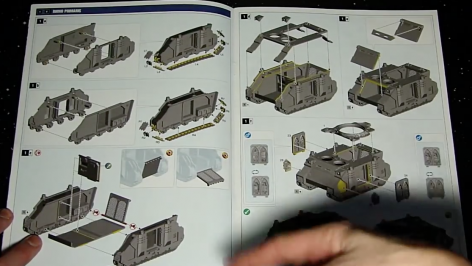 I feel like in the long run you’re going to want to take your time painting this because it’s so ornate and it’s definatly a centerpiece design.

This is, again, a Warhammer World Exclusive so unless you have friends over in England I’m not sure how you’d get your hands on this outside of Ebay. However, I don’t think this is worth super overpaying for this because you never know when GW is going to make this a general release.

This is an expensive Hobby, make sure you spend your Hobby dollars wisely! Is this upgrade sprue something you’d want to throw your money at?