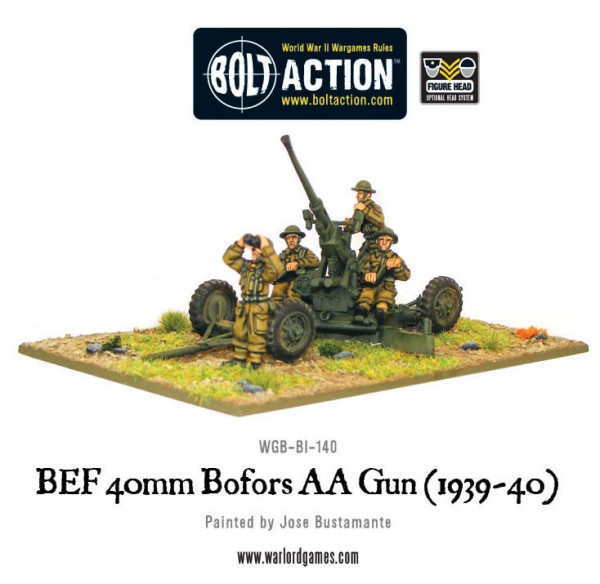 Axis Air Support got you down? Time to call in some reinforcements – It’s the Bofors AA Gun!

Warlord Games has yet another awesome historical hit for Bolt Action. The BEF 40mm Bofors AA Gun was an iconic weapon used in WWII by the Allies to put a damper on Axis air aggression. Take it away Warlord:

As the sun beats down upon the brows of the brave Tommies of the British Commonwealth and they stand firm against the Axis aggressors, the ubiquitous 40mm Bofors anti-aircraft gun protects them from the marauding Luftwaffe! One of the most popular and recognizable anti-aircraft guns of WWII, the Bofors was used by many Allied and Axis forces. Often firing over open sights at ground targets as well as it’s intended role as an anti-craft gun, the Bofors saw widespread use in the armies of Britain and her Commonwealth, in particular. So popular is it that the Bofors is still in service today! This metal model comes with a crew of four British (or Aussie, Kiwi, etc) crew – two seated gunners, a loader and a spotter. All make use of our Figure Head system so you can mix and match to your hearts content. You could even swap them for other Figure heads such as our Highland, Sikh, Bush Hat, etc heads, and make your force more distinctive. Dressed in light order kit as befit soldiers of support weapons, the crew will be ideal for us in the Western Desert, Italy, early war France, etc. This version saw widespread use from 1939 to 1942 by which time newer variants of this classic gun were being introduced. Not that this should stop you fielding this in later war armies! We anticipate that many of you will be clamouring for the later war version – fear not as that is available along with the Bofors mounted on the rear of the Morris C9/B tractor! The Morris C9/B tractor. This combination saw widespread use in the armies of His Majesty’s British Commonwealth. The most numerous self-propelled anti-aircraft gun in the employ of the British and Commonwealth forces, this was the hybrid of the ubiquitous 40mm Bofors gun and an elongated variant of the Morris C8 tractor. Seeing service with British Commonwealth from 1942 onwards (and during the Korean War!) this variant of the ubiquitous Bofors anti-aircraft gun includes a gun shield and an all-new carriage for easier deployment. Now, where are the planes of the pesky Luftwaffe, Regia Aeronautica and Imperial Japan? We have a 40mm round or two with their name on it…

If you’re an Axis Player and you got unstoppable Airsupport be warned – The Bofors AA Gun just might show up on a table near you!