Looks like someone got their hands on the new Chaos Relics! Come take a look at the latest for the Daemons of Chaos!

“Relics! They are listed as Hellforged Artefacts, and any model that can take an Exalted reward can take one of the new ones. They don’t count towards the points spent on Demonic Rewards, however a model can only have 1 Hellforged Artefact of any type.”

* A’rgath, The King of Blades: 15pts. S+1, AP3, Melee, Specialist Weapon, Blade King (Bearer always hits on a 2+ in a challenge). Demon Prince of Khorne or Herald of Khorne only, replaces the bearer’s melee weapon.

* Deathdealer: 15pts. S User, AP2, Melee, Decapitating Blow (Instant Death on To Wound of 6), Specialist Weapon, Searing Gore (Each time a model is removed as the result of attack by this weapon, its unit immediately takes an additional D3 S3 AP4 hits starting on closest models to bearer. Bloodthirsters of any type or Demon Princes only. Replaces bearer’s melee weapon

* The Crimson Crown: 40pts. +1 Attack to all Demons of Khorne models within 8″ of bearer. Bloodthirsters, Demon Princes and Heralds.

* Skullreaver: 30pts. S Uer, AP2, Melee, Specialist Weapon, Anathema (To Hit rolls of 6 are Strength D!!!). Bloodthirsters of any type or Demon Princes, replaces melee weapon. Fluff describes it as a huge axe with a Bloodthirster bound inside it

* Khartoth the Bloodhunger: 25pts. S+1 AP3 Melee Sunderer of Time (When a model suffers any unsaved wound from this weapon, it is removed from play but make a note of the models position. At the start of each turn, the controlling player rolls a die – on a 4+ the model re-enters play via Deep Strike within 12″ of where it was slain. Model counts as slain if the game ends before it returns to play). Demon Princes and Heralds only, replaces melee weapon.

* Armour of Scorn: 30pts. 3+ Armour save, Adamantium Will. Reduce the Strength of any attack that targets the bearer by 1. Bloodthirsters and Demon Princes only 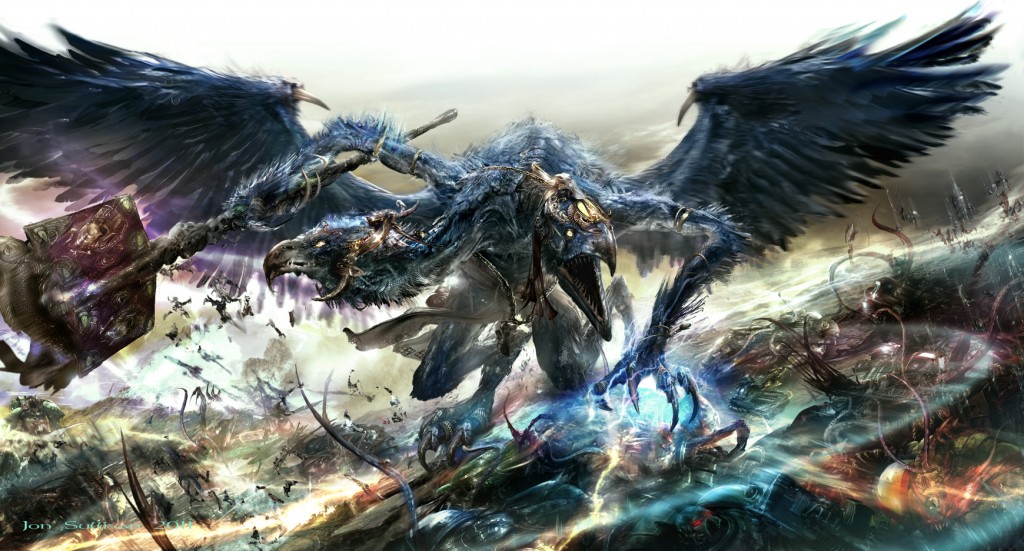 * Paradox: 25pts. S User, AP4, Melee, Concussive, Warp Contradiction (Once per turn when taking Psychic Test, bearer can pick up and turn all dice he has rolled to their opposite side instead (ie 1,3 and 5 become 6, 4 and 2). Lord of Change and Herald of Tzeentch only.

* The Endless Grimoire: 35pts. If your Warlord generates all his powers from Change, he knows all the Change powers. Herald of Tzeentch only.

* Soul Bane: 15pts. S User, AP*, Melee, Fleshbane, Incorporeal (AP is equal to target’s Initiative. If target is higher Initiative 6, it is AP-. Against vehicles it is AP1). Demon Princes or Heralds only.

* The Oracular Dais: 35pts. Counts as Disc of Tzeentch. At start of each of your turns, choose one friendly Chaos Demon Faction unit that is reserve and automatically pass its reserve roll. Herald only.

* The Impossible Robe: 25pts. 3+ Invulnerable save. Each time wearer suffers an unsaved wound, must pass Ld or be removed from play. Lords of Change, Demon Princes or Heralds only. Note the wording on that downside…

*Grotti the Nurgling: 40pts. Reduce the Toughness of all models, friend or Foe, by 1 whilst they are in 6″ of a model accompanied by Grotti, unless they are a Demon of Nurgle. Great Unclean One, Demon Prince, Herald only. The fluff for this little dude is epic!

* Corruption: 25pts. S*, AP-, Melee, Touch of Rust (always glance on a 6), Hyper-infection (Hits by this weapon automatically Wound, no need to roll. Use the bearer’s Strength for Armour Pen and Instant Death). GUO, Demon Princes and Heralds.

* Horn of Nurgle’s Rot: 35pts. After resolving bearer’s close combat attacks, add 1 model to friendly Plaguebearer units within 12″ of the bearer for each enemy model that was slain. Models must be placed in coherency and more than 1″ away from enemy models. Demon Prince and Heralds only.

* Epidemia: 20pts. S+1, AP– Melee, Specialist Weapon, Mass Contagion (Each time a model is removed as the result of this weapon, its unit must pass a Toughness nest or suffer an additional wound with no armour or cover). GUO only.

* The Doomsday Bell: 30pts. Counts as Instrument of Chaos. Whilst bearer is on the field, all enemy units are at -1Ld. Herald Only.

* Soulstealer: 20pts. S User, AP3, Melee, Soulgreed (each time a model is removed by this weapon, the bearer immediately regains 1 lost wound). Keeper of Secrets or Demon Prince only.

* The Forbidden Gem: 15pts. At start of Fight Sub-phase, after challenges issued but before blows are struck, any model in a challenge must roll 3D6 and subtract their Ld. That model suffers penalty to WS and Initiative equal to the result for the rest of the phase. Herald Only

* Whips of Agony: 15pts. S User, AP5, Melee, Agonising (the bearer can re-roll all failed To Wound rolls. Any model that suffers unsaved wounds cannot make attacks for the rest of the Fight Subphase). Exalted Alluress only….

* The Mark of Excess: 15pts. At the end of a Fight Sub-phase in which the bearer kills a Monstrous Creature or Character, it gains +1 Attack for the rest of the game. KoS, Demon Prince or Herald.

What do you think? What are your favorite relics to the list? Let us know in the comments below!