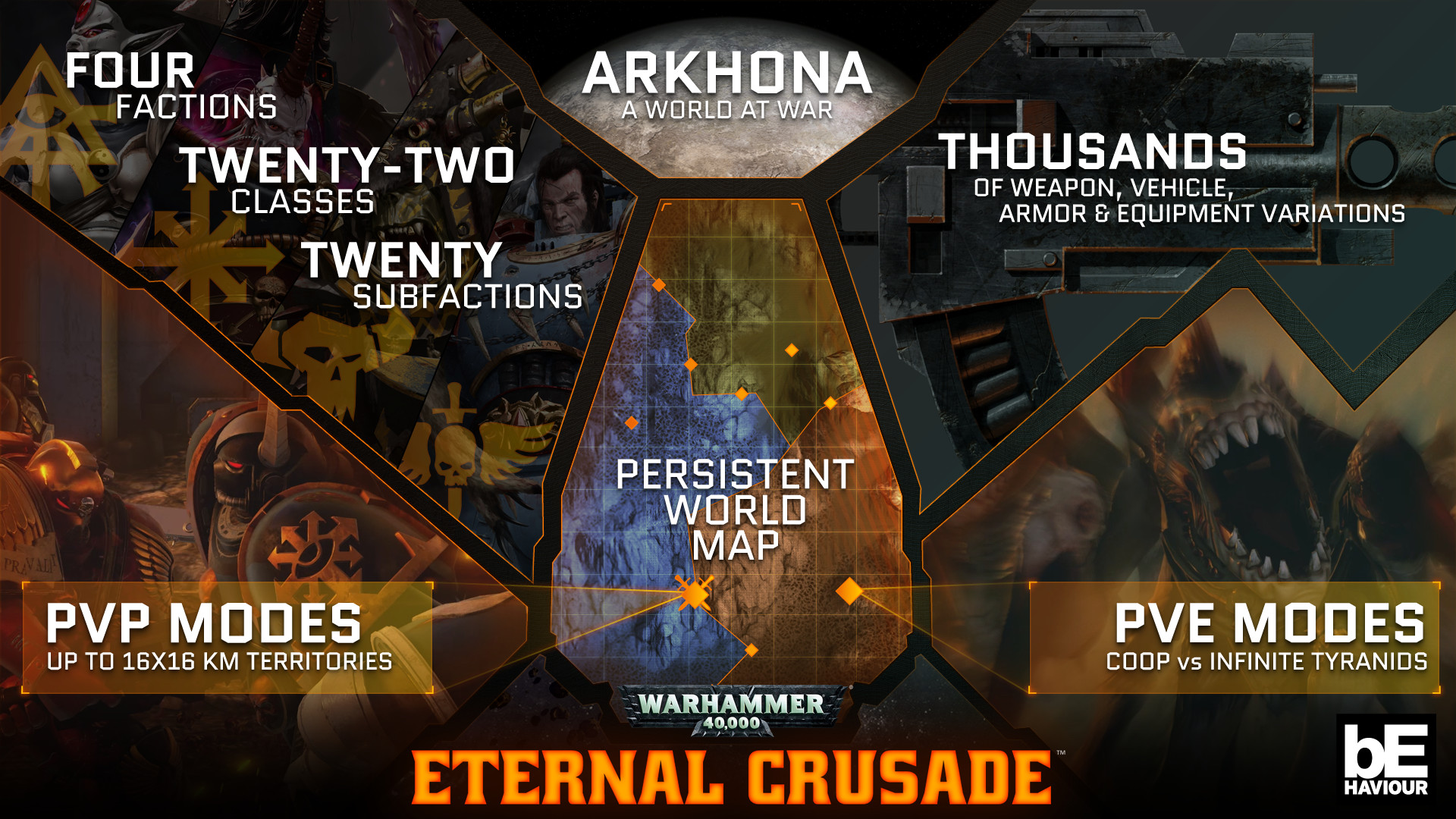 My name is Michael Chan and I’m somewhat a bridge between combat gameplay, the persistent world and character progression/personalisation systems. Continuing our States of the Crusade in this wonderful New Year of the Monkey, we’ll be introducing the persistent world systems which are in development. Our teams working on the shooter are getting happier with the fun factor; focusing on performance and bugfixes; adding new weapons; and working on Eldar and Orks which we expect to see within the next two months.

Our goal is at least to see Eldar on the Founders server to expedite and playtest them before they head into Early Access Alpha. Our new maps will also get the same treatment. Playtesting, feedback, playtesting, repeat. This arm of the team will keep on trucking while we advance on persistent world systems.

So what system is next?

We now have an early prototype of the loadout system in-game which we will continue to evolve. A loadout consists of items from the character progression tree and your post-battle rewards: weapons, weapon modifications, accessories and consumables. Items from the Rogue Trader Store are equipped here as well, but remember the best stuff is achieved in-game.

Each class will allow different types of items to be equipped; and through these you can customise your offensive, defensive and utility capabilities. Each loadout can hold items up to a certain number of points, so it’s not possible to take only best in slot. Oh, and weapon modifications includes such things as combi- (or kombi- if you’re an Ork. WAAAGH!) weapons.  You will eventually be able to save more than 5 custom loadouts, from which you will bring into battle a smaller set after considering which map you will be fighting over, who your foes will be, your war party composition and your knowledge of the metagame.  If the prospect of creating loadouts seems daunting to you at first, then fear not – there will be preset loadouts to act as examples of what potentially viable loadouts might look like.

Visual customisation will also be a part of this system; although your choices will not count towards the loadout’s point limit.  How does this tie into the persistent world?  You’ll notice that XP is being tallied. This is the first step towards persistently tracking everything your character accomplishes.  The XP will be spent in the progression tree and, alongside post-battle rewards, give you greater access to a range of loadout options. You will be able to perform feats you weren’t previously capable of; and choose between being a general- or specialist on the field of battle. 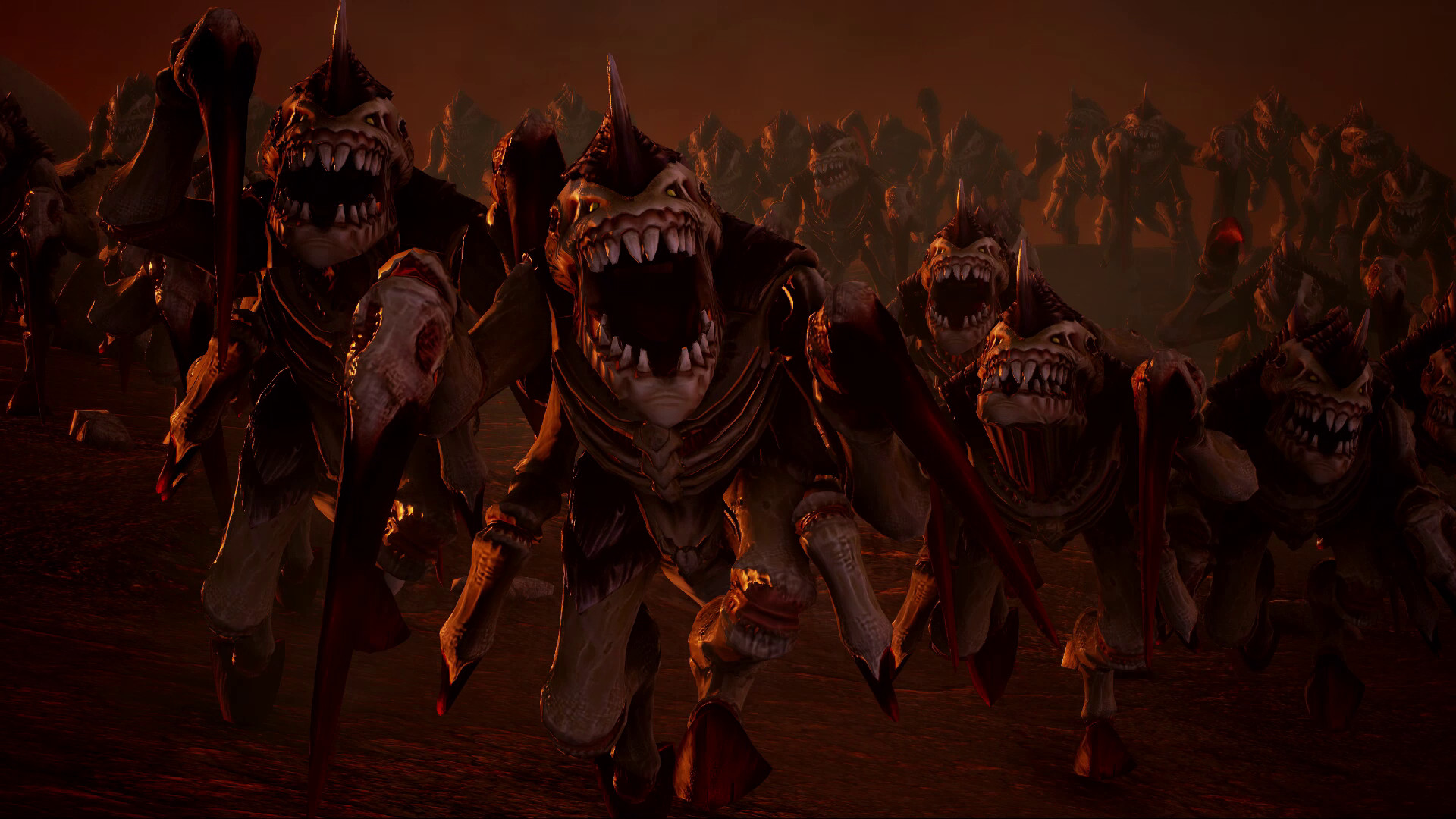 At some point during your character progression, you can also unlock veteran versions of basic classes whose loadouts have more points and access to exclusive item types.  Then there are also Elite & Hero characters that have a mix of unique fixed items and a few optional item slots.  Wow, we’re back to flaming Space Marine Elites and explosive Ork Heroes?  Of course! They never went away; and while these are purchased and look ubar-kööl, their power is just an intermediate convenience and won’t overshadow your character’s personal accomplishments in the persistent world.  OK – I get it, you have character advancement tied into loadouts and flaming stuff!  Oh yes, and there is no party like a war party – which will get its SoTC’s alongside the persistent world map and Warlords.

To recap: you make a character, advance that character, then it’s carnage for the greater glory of you and your faction through campaigns and territorial conquest. 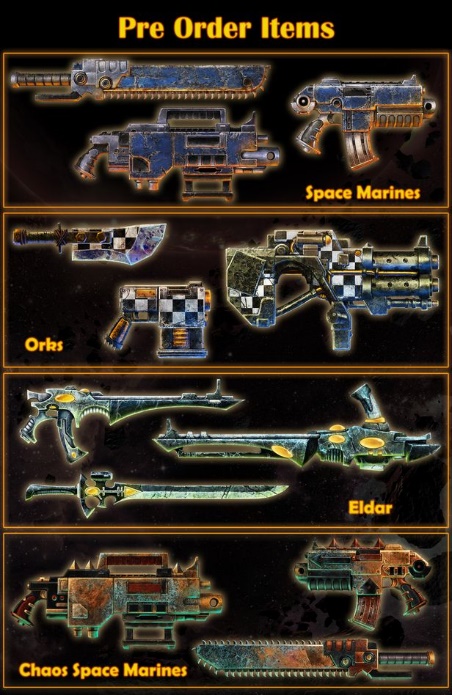 If you want to read more or helps us in evolving the shooter part, by all means jump into our Early Access Alpha, but don’t expect a single-universe-open-world-Skyrim-RPG-with-1000-player-battles. The technology to create that is not yet ready (but it will come).  Until then, we will simply go ahead with a Massive Online Third-Person Squad-Based Shooter in a persistent world – with battles ranging from 5 player co-op to 100 player Fortress taking.

You can read our 11 previous States of The Crusades to catch up on the changes; but no, we’re not “just” a lobby shooter any more than Destiny or The Division after years of development. As we currently spend all of our cash-moneys on making WARFARE instead of advertising, it would be dearly appreciated that you could correct this misunderstanding when you encounter it. Despite my tea-drinking skills, there are a lot of news and forum sites out there and I’m starting to feel like in a certain Month Python sketch.

As always, thank you for your continual support and staying with us. We aren’t going anywhere if you’re here with us! 🙂