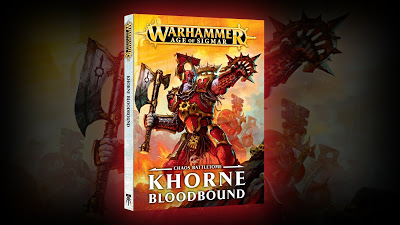 The Khorne Bloodbound Battletome presents us with an interesting look at how AoS will be handled going forward. Here’s what I discovered:

It is the first book to deal with a familiar faction, but spin it in a new way for the Mortal Realms. So how do Khorne’s favored fare in their new book?

When this book initially came out, I have to admit, I wasn’t super eager to read through it. Chaos to me just seemed like Chaos and I felt like I had read everything I wanted to know about the Bloodbound in the campaign books. The more and more I saw of them though and heard from other people, the more I wanted to get my hands on this Battletome, and I’m glad I did. 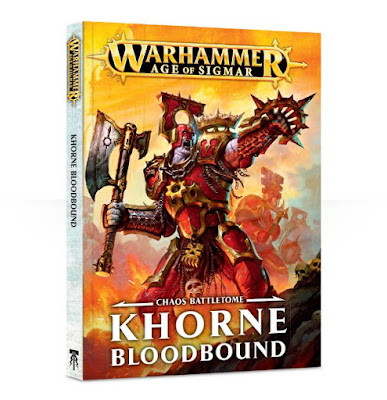 The physical book itself is just as high of quality as you would expect from GW at this point. I do think the cover art is one of the weakest we have seen so far for AoS. There’s something about it that seems a little more cartoony then the others we have seen. I don’t think it helps that the warrior is in a pose that’s very reminiscent of an American Football player. The cover has grown on me the more I look at it though. There are plenty of details on it that stand out to you once you move past the slight goofiness of the main guy. 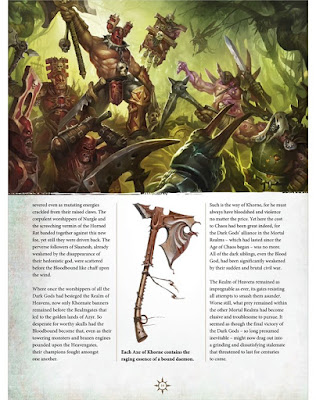 The first section of the book covers the history of the Bloodbound. Like I said previously, I was worried that this was just going to be a repeat of what I already knew and only focus on Khorgos Khul. Luckily it delves into a lot more than that, and in fact, covers very little about their interaction with the Stormcast. For those unfamiliar with Warhammer and the forces of Chaos there is an overview of who Khorne is and what the forces who venerate him are like. For everyone who has come over from Fantasy or 40k, this will be familiar ground, but it’s not a boring read at all. Once we move on from there we start dealing more with the actual Bloodbound and how they behave. There’s plenty of talk about past battles during the Age of Chaos, which all hint at some pretty cool things. We also see how the Bloodbound differ from the typical forces of Chaos you may have been familiar with during 8th edition. They are much more tribal, which I really like. They seem a lot more primitive then the Marauders of Norsca from the Old World, and a lot more shamanistic. To me this presents some really cool modeling opportunities and also how you structure your forces. 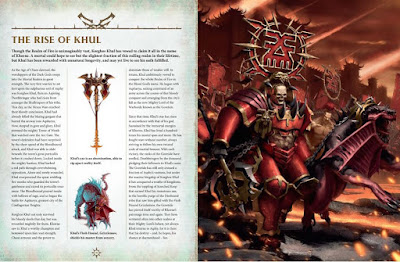 There is a section dedicated to Khorgos Khul’s story and his rise to power. Khul seemed a little two dimensional to me from reading the campaign books, but this really fleshes him out more. His backstory is actually fairly interesting. He was the first khorne warrior to step foot in Aqshy, and his first major battle is pretty epic. It’s nice to see that he didn’t just start out as the big bad of the Bloodbound, but actually earned it and started out as just another Aspiring Deathbringer. 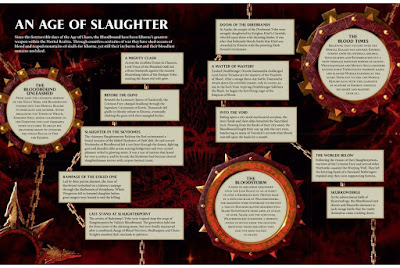 Just like the Stormcast Eternals book there is a timeline of sorts, highlighting some of the major events and battles of the Bloodbound’s history. There are a ton of cool hints about stuff that happened during the Age of Chaos that I hope gets expanded upon going forward. This is one of the things I really like about AoS. There are a ton of cool, very high fantasy ideas sprinkled throughout the stories that GW can come back and revisit or expand upon at some point in the future. 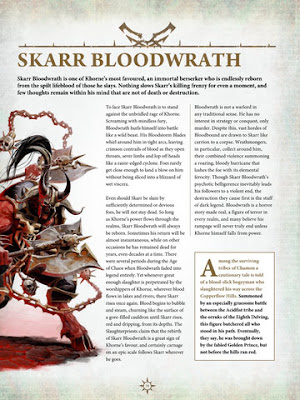 After this we move on to the individual unit descriptions, where a lot of the specifics about the Bloodbound are covered. There’s too much to cover completely but I can briefly go over a few of my favorites. The Slaughterpriest and Skullgrinder are both really cool and unique. The Slaughterpriest helps reinforce that tribal, shamanistic vibe I was talking about earlier. He is a priest for the army, and very fitting for a Khorne army. They can’t have any wizards, so the Sluaghterpriest fill that niche nicely. He almost has an Aztec vibe to him with how he gains his powers from drinking the enemy’s heart blood. The Skullgrinder on the other hand represents a facet of warfare that isn’t often addressed with Chaos. Clearly weapons and armor are very important to the god of war, so it makes sense that the person responsible for crafting those for his forces are equally as important. The coolest bit about their story for me is how the first Skullgrinders just appeared one day, walking out of the wastes and taking possession of each tribe’s anvil. The Blood Warriors’ lore was not what I expected with them being chosen by Khorne and then their armor almost magically forming around them. Whether that part was allegory or truth is kind of left open ended. Honestly, every unit entry had a rather interesting bit of lore. They even managed to make Skarr Bloodwrath a pretty interesting character, with him being more of an avatar of Khorne who re-appears every few years, manifesting himself from a puddle of blood. Along with Skarr, we also are joined by two more veterans of the World-That-Was, Scyla, and Valkia. I’m particularly glad that Valkia found her way into the Mortal Realms. Besides just being an awesome miniature, her story is pretty cool and this game needs more strong female characters in it. The fact that one of Khorne’s most favored servants is a woman is great and I’m glad to see it continue. 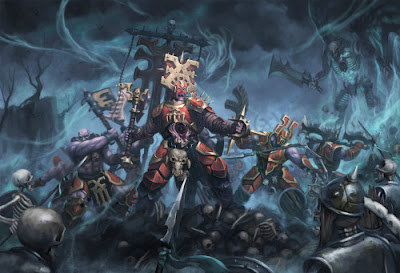 I have to mention the artwork at some point too. It’s another fantastic contribution to what we have already seen for AoS. I was worried it was just going to be a lot of Khul or Bloodbound vs Stormcast, but they worked in a ton of variety. The Slaughterpriest and Skullgrinder get a lot of attention, as they should since they are fantastic designs. 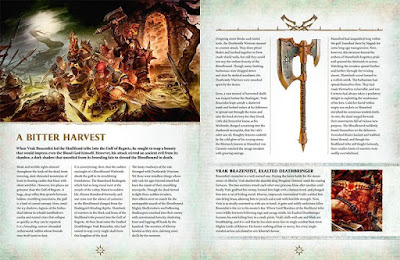 The next bit covers the three battleplans that come with the book. The first one centers around a Bloodbound horde marching into Shyish to claim the region in Khorne’s name. They find themselves swamped by undead warriors led by none other than Mannfred Von Carstein. The story attached to it is interesting enough and lets us take another peak into a realm outside of fire, life, or metal, which is always welcome. The battleplan itself revolves around the Bloodbound surviving waves of attackers. The attacking force is actually divided up into three waves, with the general being in the final wave. It seems pretty fun and I wouldn’t mind giving it a shot. Even though these battleplans are written with the intention of the Bloodbound being one of the forces, I think it would be pretty easy to tweak the rules just a bit to make it work for any two armies. 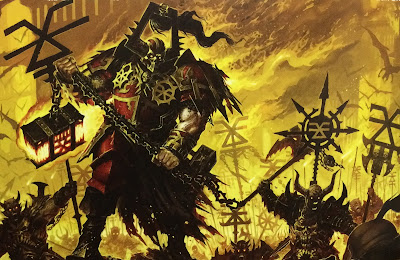 The second battleplan is about a Bloodbound champion being tasked with killing an Ogor Hunter in the Realm of Beasts. The story for this is really cool, and again, gives us a look at a realm we haven’t seen yet. I am pretty excited for them to explore this realm more since it seems to have a pretty strong pre-historic vibe. The Bloodbound force consists mostly of Bloodcrushers while the Ogor’s army has a lot of Sabretusks and Stonehorns. There is also some of the coolest artwork, in my opinion, for the Bloodbound in this section. There is one illustration of a Skullgrinder which is very stylized but just looks awesome. The battleplan itself is all about the two generals trying to kill each other, very fitting for Khorne. 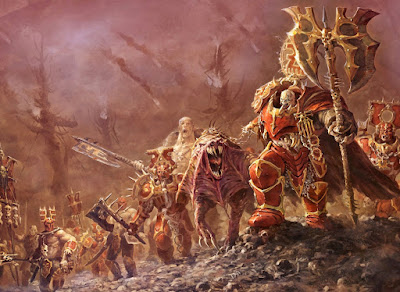 The last battleplan brings us back to a familiar story arc, the first battle for the Gates of Azyr, the one from the starter set. Despite this, it isn’t just rehashing the same battleplan and story we have seen before. This one is actually all about the immediate aftermath. Khul has been beaten and Vandus is now being forced back. The story has the Bloodbound push forward into the Stormcast, inadvertently saving their fallen lord. The battleplan itself is rather cool. The table is split in half for deployment. In the opposing player’s side you place three counters, and each time a Bloodbound unit captures one you roll to see if it is your fallen lord or not. If it is, then you discard the other two counters, or if you reveal two of them, and neither are the lord, then the third one automatically is. It’s new victory conditions and forces you to be rather fluid in your army choice. You need to make sure you have units that can react quickly if they suddenly need to move to the other half of the table for the objective. Most importantly for AoS though, it fits the lore and tells a great story. If I had to pick just one battleplan to test out from this book it would be this one. 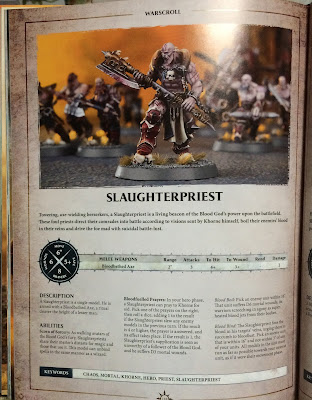 The very last section of the book are the Warscrolls and Battalion formations. The warscrolls are the same as what we have seen in the App and online for the Bloodbound, so nothing new their. The battalions present some rather cool, and story driven army ideas. I am very tempted to make the battalion that is all Wrathmongers, or all Bloodcrushers. This is my favorite thing about the battalion formations in general. They are usually very fitting for that army’s unique flavor, very story driven, and provide some good buffs to your force. I’m sure it doesn’t hurt GW that it encourages you to buy more models, but that’s besides the point. I love what they provide and I am always interested in what a new army’s battalions will be.

It all wraps up with the four pages of core rules at the back of the book for your convenience. It’s pretty nice that GW has made each Battletome self contained in that respect. It gives you everything you need, the core rules, the army rules, and scenarios to play. I was pleasantly surprised with how interesting this book was considering it’s Khorne. Nothing against the blood god, but he can tend to be a bit flat as far as depth goes. At the moment, I already have a ton of Nurgle demons painted, so it makes more sense for me to go with Nurgle, but maybe I’ll add in a small Khorne force of Wrathmongers, led by Skarr Bloodwrath and a Slaughterpriest. Damn you GW for hooking me on a new army.