Star Wars: Age of Rebellion: Lead By Example Out NOW! 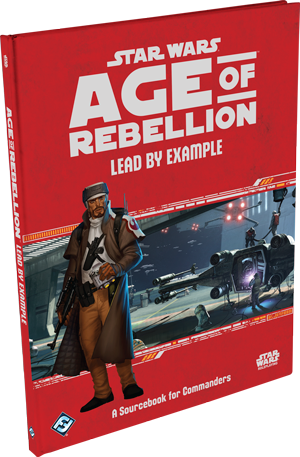 Do you have what it takes to Lead from the Front? Then Answer the Call with the latest Star Wars: Age of Rebellion Sourcebook: Lead by Example!

One of the key concepts in all of Star Wars is…well it’s in the name: Star WARS – and with the latest Sourcebook for Age of Rebellion, you’ll be able to put your Player Characters right in the middle of those EPIC MASS COMBATS among the Stars! Got your attention? Good! Now lets see what Fantasy Flight Games has to say:

If it weren’t for Commanders who were willing and able to take up the mantle of leadership, those hungry to liberate the galaxy from Imperial rule might never have come together to form the Rebellion. But command, whether it entails shaping military strategy, training new recruits, or being a recognizable face of the Rebel Alliance, is not easy. Lead by Example, a sourcebook for the Star Wars®: Age of Rebellion roleplaying game, offers Commanders the talents and other tools they need to succeed.

Inside the 96 pages of this career supplement, players and Game Masters will find three new Command specializations – Figurehead, Instructor, and Strategist – as well as new playable species, gear designed to support Commanders in the field, and vehicles ready to take on Imperial fleets. The book also features detailed guidelines for situating PCs within large-scale, cinematic mass combat scenes and suggestions for crafting engaging, high-stakes, military campaigns. 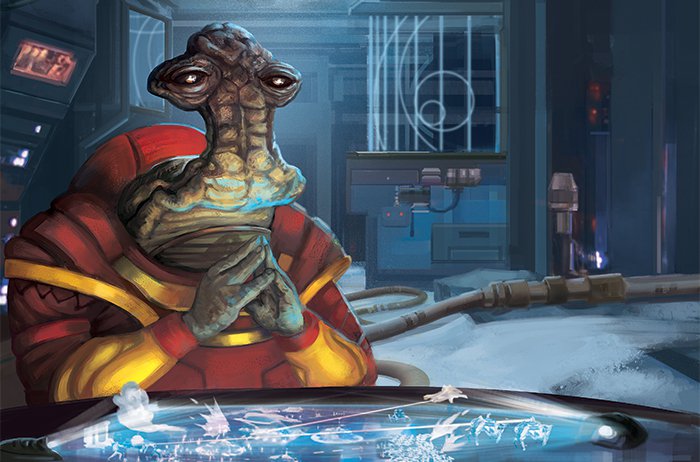 The playable species of Lead by Example all have the potential for leadership positions in the galaxy-wide Rebellion, but you may find that they each produce a very different kind of leader. A Wookiee would be unlikely to have the same relationship with his or her troops as a Zabrak or a Hutt. So, too, the Ishi Tib, Chagrians, and the Lannik will likely have very different understandings of what it means to lead, and very different relationships to violence and war.

Chagrians, on the one hand, are compassionate and peaceful amphibians who tend to believe in laws and regulations as agents of good. Their watery homeworld’s abundant natural resources and lucrative tourism industry have produced a prosperous and just society virtually devoid of social inequalities. Homelessness, disease, starvation, and crime are incredibly rare, with the result that Chagrians cannot ignore injustices when they encounter them off-world. The few times that wars have broken out on Champala, they were heavily shaped by moral codes and official procedures — far from the total warfare in which the Empire is willing to engage. As leaders, Chagrians are likely to listen to all viewpoints before making decisions, but very unlikely to do anything that would break the rules.

The Lannik, on the other hand, are well accustomed to the brutality of warfare. Conflicts break out frequently on their homeworld and most Lannik serve in the military at some point in their lives. These long-eared, diminutive humanoids rarely back away from a fight, and their society values bravery and personal honor above all else. A Lannik Commander is likely to undertake an important mission against nearly impossible odds, and will refuse to retreat even when death and defeat seem inevitable.

The Ishi Tib are, like Chagrians, humanoid amphibians who have created an equitable, communal society on their homeworld. Yet while Chagrians are tall and lithe, Ishi Tib are strong and bulky; Chagrians are stoic and empathetic, Ishi Tib are intellectual and willful, liable to snap violently if pushed too far. Therefore, an Ishi Tib may not be the best Commander to deploy to the front lines or to lead a difficult mission. Behind the lines as Commodores or Strategists, however, Ishi Tib are invaluable. 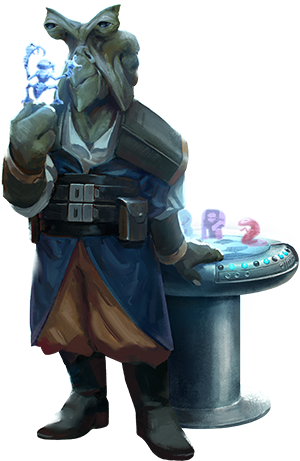 The Rebellion, vastly outnumbered and outgunned by the Galactic Empire, generally prefers  hit-and-run tactics to pitched battles. Occasionally, however, a full-blown multi-front battle is unavoidable, as it was at the Battle of Yavin.Lead by Example provides detailed rules for how to stage one of these grand confrontations with numerous moving parts, while ensuring that the shape of the battle affects your group of Rebels, and that your group of Rebels have a chance to affect the outcome of the battle.

A mass combat scenario is going to takes more than a couple rounds to unfold. Therefore, it is recommended that GMs break their mass combat scenario into various phases that represent the battle’s shifting tides. In each phase, the GM will make a Mass Combat check that reveals the broader state of affairs: perhaps the Imperials are winning on the ground, but lost two Star Destroyers; perhaps a strike team has taken out the Imperial Commander, but the legions of stormtroopers are still fighting on, unaware of that. The idea is to situate your roleplaying group in a cinematic adventure. Whether or not they win or lose the battle, they’ll have the sensation of contributing to something magnificent and big.

New Species, gear, specializations, vehicles and a cinematic way to battle in the Star Wars Universe – what’s not to like!? Go check out Lead By Example – in stores now!

Move as close as you can and engage those Star Destroyers at point blank range! 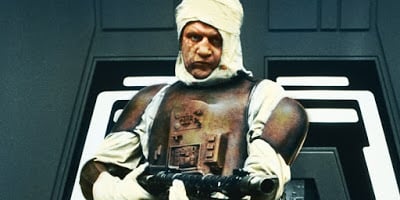