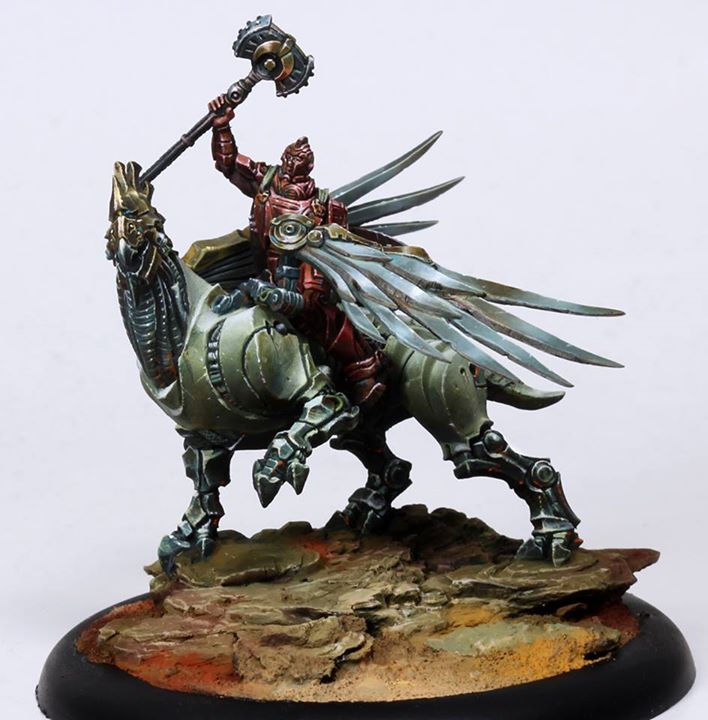 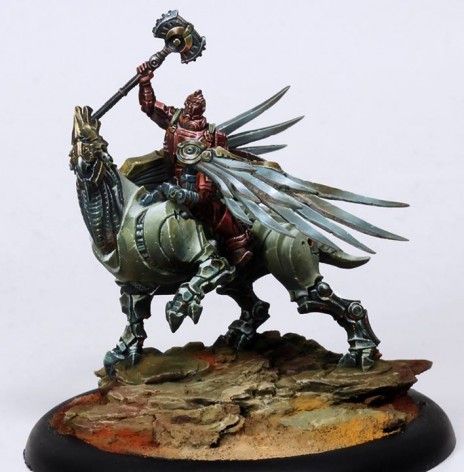 It’s time to introduce you to another one of Dark Age’s Forsaken Saints: John.

Dark Age is set in a world of scarcity and privation. Still, as the son of an ammunition manufacturer, John was born into a life as close to wealth and comfort as any human on the planet could know. With an early eye for military life, John’s position allowed his family to hire instructors that insured he quickly advanced in the Forsaken army. Nonetheless, instruction is no substitute for actual experience. Early in his command his army was handed a crushing defeat by a band of mutated creatures. Creatures whose kind would later come to be known as the Brood.

The loss of not only the lives of his men, but also those of the settlement he failed to protect, was devastating to John. He sought solace in religion eventually deciding that the loss was god’s way of teaching him humility. When Saint Mark was canonized, John was certain he must be a Saint as well – none other than the second coming of the Saint John of old earth. Not wanting to alienate a family that was such an important source of ammunition, the Prevailer Council confirmed his new title. An adoring populace, so caught up in the recent wave of religious fervor that they forgot about John’s defeat, applauded. The officers of the Forsaken military shuddered.

Fortunately John’s notions of his own divinity have not prevented him from growing into an able military commander who places the lives of the Forsaken people above his own ego. His family’s wealth affords him the best equipment, including a portable generator that powers his armor and signature hammer. He strives to ensure the troops serving under him are likewise well equipped.

Like all the saints he has proven difficult for the Prevailer Council to control, pursuing his own war in the lawless lands of the south. While bandits were his first opponents his army has lately encountered vanguard forces of the Brood. This Crusade takes him too far from the capitol to be able to return to protect it with any haste, much to the chagrin of the Prevailers who canonized him. 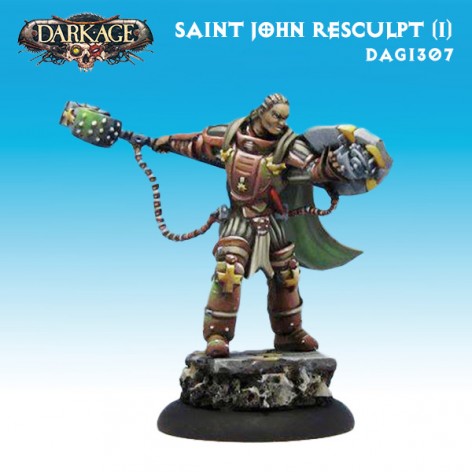 Before I go any further, here’s a reminder: you can check out all these rules for free on the Dark Age home page under their downloads drop down tab. Here’s a quick link to John’s.

He’s a real Juggernaut. His hammer, when powered, makes him one of the hardest hitters in the game with its high AS and PW, along with Brutal, and Extreme Damage along with some Knockdown and Stun just in case whatever he’s hitting survives. Of course if you think he’s in danger, you could choose to power his armor. He’ll have two chances to make his save, but risks losing an additional wound if he rolls a 16 or higher. His ARM is already a couple points higher than most of the other Saints, so its probably best to only power that armor if you’re facing a really heavy hitter. Although if they have a power multiplier it can be a little more iffy.

So he hits hard and can take a punch too – what’s the downside? His ranged attack is pretty weak – the same as a rank and file Coil with none of the special abilities that unit gets. Better to have it and not need it I guess. Additionally, John doesn’t perform too well against mobs of opponents. He can only make one attack per AP and has no Arc or Template attacks to hit multiple models at once.

John’s Griffon will help make up somewhat for both of those shortcomings. Since there’s an unfortunate typo on the downloadable cards, you can’t see the Griffon’s Screech attack. This AS 8 Spray attack might only have a PW of 2, but it has both the Stun and Whiplash abilities. This means anyone it hits will probably lose 2 AP when they next activate (note the fine print in Whiplash where id the model is wounded it doesn’t have to lose an AP).

This can be devastating against bunched up groups of troopers or elite character models. When you use the screech you can also simultaneously take a shot with John’s Disk Launcher. Additionally, mounted John has twice the wounds of his on-foot counterpart. This is balanced slightly by his poorer DF stat, but I’d always take the extra wounds over a measly 2 points of DEF. John Aegis of Faith is an expensive model in dollars and points, but devastating on the tabletop. 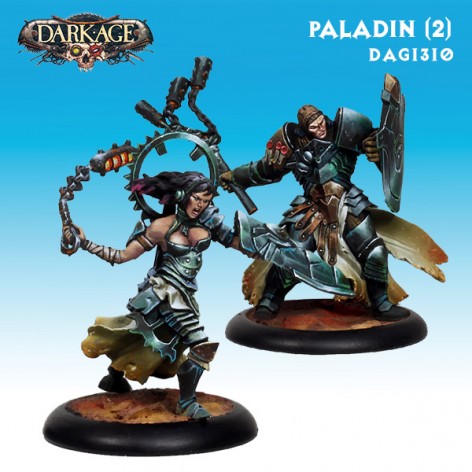 Paladins are the real head turner when it comes to the forces of John. They’re some of the coolest looking models in the game. They even come on medium bases so they look extra imposing. It’s easy to see these guys and want to grab two blisters and max out on the FA but I’d say don’t bother. They’re not bad in combat but they’re really more of a toolbox. With Guard they can help protect juicier models like a Field Medic or Deacon. When they’re active they’ll want to use Shockwave to set up other models to swing at easier-to-hit Prone targets. They might even be able to clear a charge lane. 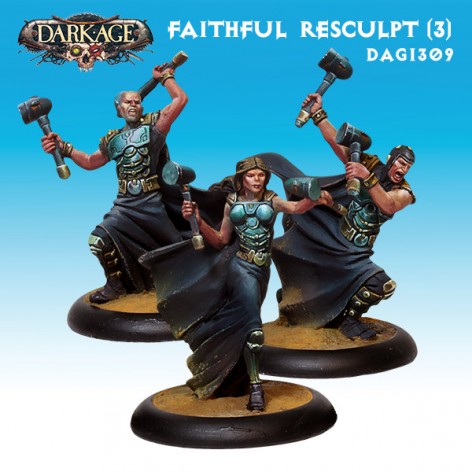 If the Paladins are the icing, the Faithful are the cake. Or maybe they’re the mashed potatoes and the Paladins are the gravy… then Saint John would be the steak. Yeah OK that’s a little better. Anyway my point is these are the ones who are going to be doing a lot of the work. Unlike the Paladins they can swing twice per AP making them much better at dealing damage. While their ARM is noticeably lower than the paladins, Unstoppable can make them even more, well, unstoppable. 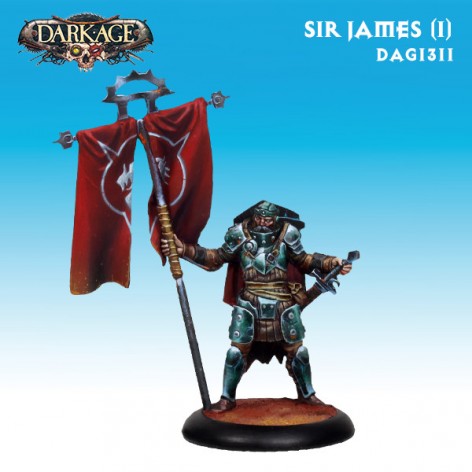 To continue my earlier food metaphor, Sir James here is basically like… you know what food metaphors are dumb. James is an excellent buffing tool for your Faithful, or Paladins if you choose to ignore my advice and run them as a combat unit. He allows the Paladins or Faithful he Squadlinks with to re-roll one missed attack per attack action. Bannerman of John, though more situational, can also be incredibly helpful. It’s rare that I find my Forsaken panicked, but having a way to avoid it entirely is great. It’s even more unlikely you’ll find yourself suffering negative PS modifiers, but given how Unstoppable works, your Faithful may be very glad Sir James has this one. His DEF and ARM are good enough to make him fairly hard to kill, so he’s not bad for objectives. This is good since he doesn’t have too much to offer in combat. At the end of the day, he’ll set you back a good amount of points. He’ll likely never make his 100 point cost back on his own, but his buffs will more than make up for it. 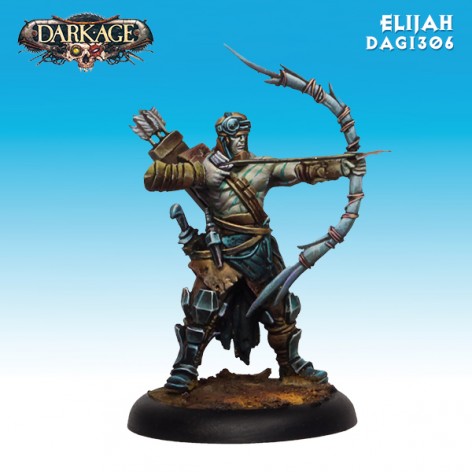 Elijah is the misfit in the forces of Saint John. Whereas John and the rest of his buds are very much the charge proudly head first into combat types, Elijah is a sneaky hunter. He feels more like he belongs in a Saint Mark list what with Infiltrate and Toxic and a… ranged weapon? He has a pretty great bag of tricks for 75 points. Since Dark Age is a game of objectives, Infiltrate is always helpful since it allows you to put the pressure on early and force your opponent’s hand. His defensive stats are decent but not great, but regeneration is super annoying (trust me my friend has been playing Brood a lot and he has been killing me) and it really does contribute to his survivability.

Backstab combined with the Bonecraft Bow’s decent stats make Elijah a pretty nasty killing machine. Additionally, think about how mean it will be to put a Toxic Counter or two on a model that has or will be hit by the Griffon’s Screech. If you’re thinking that’s overkill, well, most times you’d be right. But there are models in this game scary enough that it’s still worth it. And if Elijah gets tied down in melee, his Skinnin’ Knife can still bring the pain.

All of John’s special troops are pretty elite, so he’s one of the most inexpensive Saints to start playing. Even if you only want to run John on his Griffon (and most folks do since his on-foot sculpt isn’t very popular), you can get a 500 point John army for just over $100. What I have in mind here is John Aegis of Faith of course, 3 Faithful, and Elijah. When you’re ready to expand to 750, you add the Paladins (who are sold out at the moment). Personally, I think I might just take one Paladin, and replace the other with a Sister of Compassion. Medic and Restoration make the Faithful that much more annoying. Once they finally fail an Unstoppable check, you can heal them and send them back in. They will keep the Weakened Resolve counters though.

What you do with the remaining 100 points is pretty flexible. My first thought is to go with a Deathstryke. He doesn’t cost too much money, and he adds some good shooting to a list that could stand to have a little more. And he’s a Commander so he can hop in on a big Squadlink with John and the Faithful. It doesn’t hurt that he used to be a John specific model also. He became generic in the new book, but I digress.

~Hope you enjoyed the article! I managed to grab some Paladins before they became impossible to find, and I now have all the pieces I need for my John army. I’m looking forward to painting it when I finish the Arena Rex stuff I’ve been working on. Who’s been playing with this Saint?