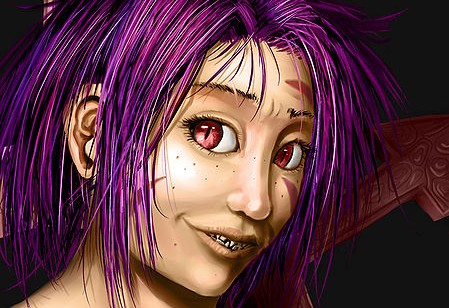 Checkout our tips and tactics for all the spicy formations & Datasheets in the Curse in the Wulfen! Here come the combos!

I’m going to start with the new Daemonic Incursion decurion detachment, which is a super spicy meatball. This thing is so amazing that it makes me feel bad for Ork players, because compared to this they got a lump of coal in their stocking IMHO (their core is huge and their command was pricey)!

The Ork benefits are good don’t get me wrong, but you have to field a ton of models. For me when you’re playing a ton of Ork models the game just drags on, but of course that’s the Ork play style mostly.  However I feel like it would have been nice to see some other options.

The Daemon Incursion on the other hand is stacked. Even the detachments that don’t look strong are great on their own accord! 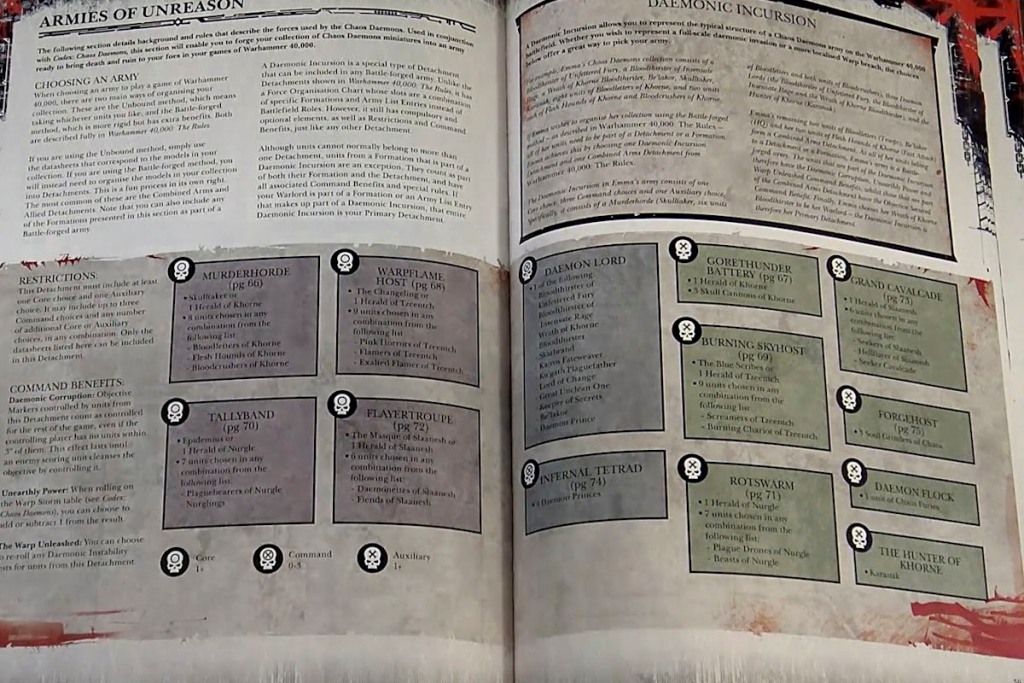 Also Command Benefits confer to things that join these units but they don’t confer Special Rules unless they specifically say. Also keep in mind that some of these Command Benefits explicitly state that they don’t confer unless “all units are from the Daemon faction” or “Daemonic Incursion only” so they would then only apply to models from this detachment or this formation.

So an Independent Character that joins these unit and will sometimes get those command benefits.

The Demonic Corruption command benefit counts objectives as controlled for the rest of the game. This effect lasts until an enemy cleanses it by controlling it. Theoretically if you have a fast moving unit you could score a bunch of objectives on turn 5 or 6 by Voltron-ing out Independent Characters from the same unit – Watch Out!

You could also deep strike in and then walk off and it’s still yours, as long as they don’t get wiped that unit controls it wherever they go!

Unearthly Power is really nice. You can choose to add or subtract 1 on the warp storm table. The average of course is 7, all is calm, no big deal.

However, if you add 1 that’s 8; the Dark Prince Thirsts, which is a solid rule! Now you can effectively hit your opponents entire army doing damage little by little over the entire game and knock out some transports which would really do a number on Gladius like formations. The 6 is okay, but not quite as good IMHO. It could be good for high toughness armies though. Fateweaver however, let’s you re-roll a dice, and you could turn a 7 into an 11 reliably to make an enemy Psyker into a Herald.

It’s nice they included that you can take rewards on the new HQ Bloodthirster units introduced back around the Summer of Sigmar. I think a lot of people may have forgotten about that because they put those rules in the White Dwarf and not in the book. 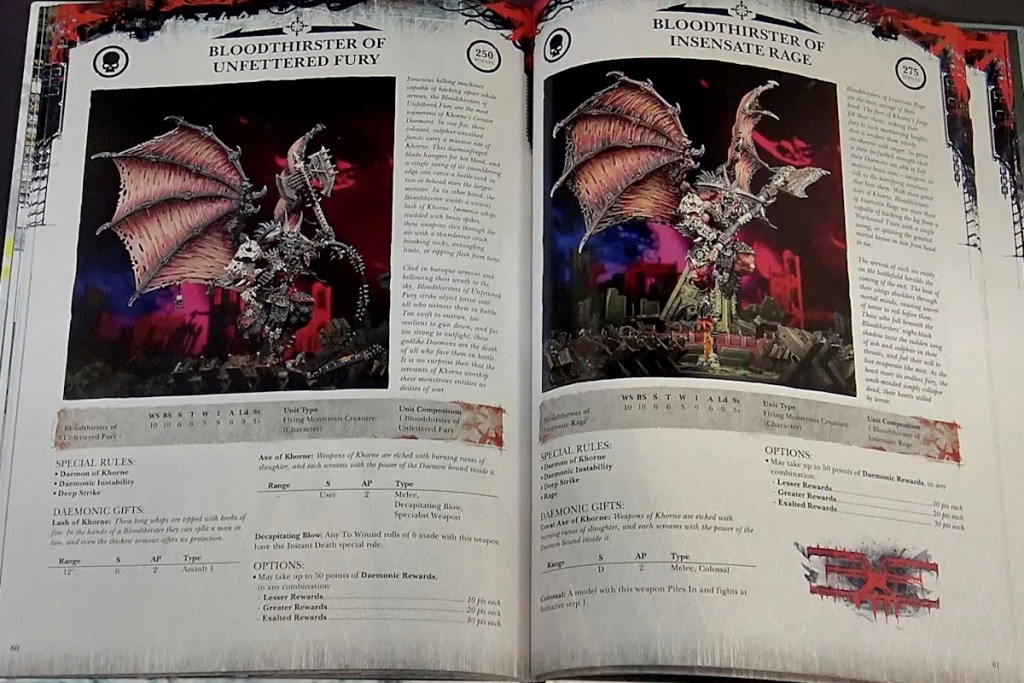 The Exalted Flamer of Tzeentch, doesn’t get a lot of love (Dude doesn’t even have a base), because he’s normally on top of a chariot. 50 points solo (100 points with the chariot), but he’s Infantry AKA a ground pounder. The Flamers themselves aren’t though. Maybe he’s just a fatty, I don’t know, but it’s interesting how slow he is. His shooting attacks however are amazing. He has a warp flame which combos well with other parts of the book. His torrent weapon is also solid which also combos well. However, he can’t move and shoot, BOO! Lot’s of could shenanigans could be had, but he can’t move and shoot. He can’t even deep strike in and shoot either! His mobility is a huge red x against him in a sea of thumbs ups! 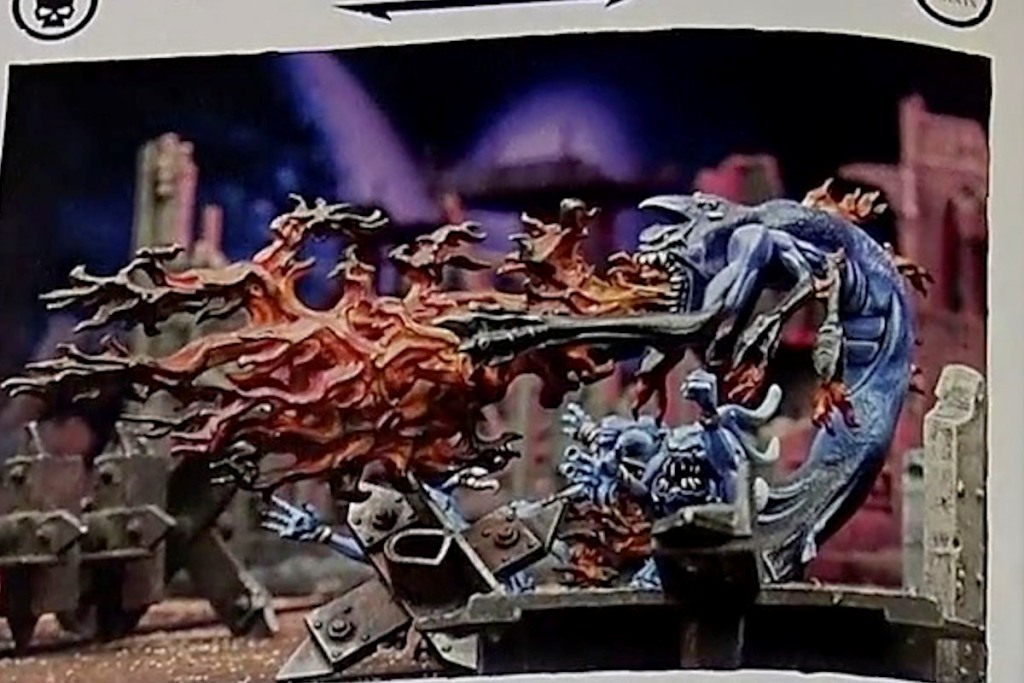 Dude, where’s my BASE?

The new Belakor datasheet technically says he can’t be taken in a Choas Space Marine army. Online version, yes, this print version, no. Maybe they’ll errata that but technically, by the book he might not be allowed in a Chaos Space Marine list.

The Muderhorde is a solid formation. I like it, it’s saucy and it’s worth taking. Actually all the four Chaos God’s hordes are really interesting. They can stack the locus which gives them a bigger radius. You can’t stack the SAME locus but multiple will stack. A lot of these guys already have rage or can get rage and can turn into a blender when you have units of Bloodcrushers and Flesh Hounds. They’re so hard to deal with it blows me away how good it is right now. 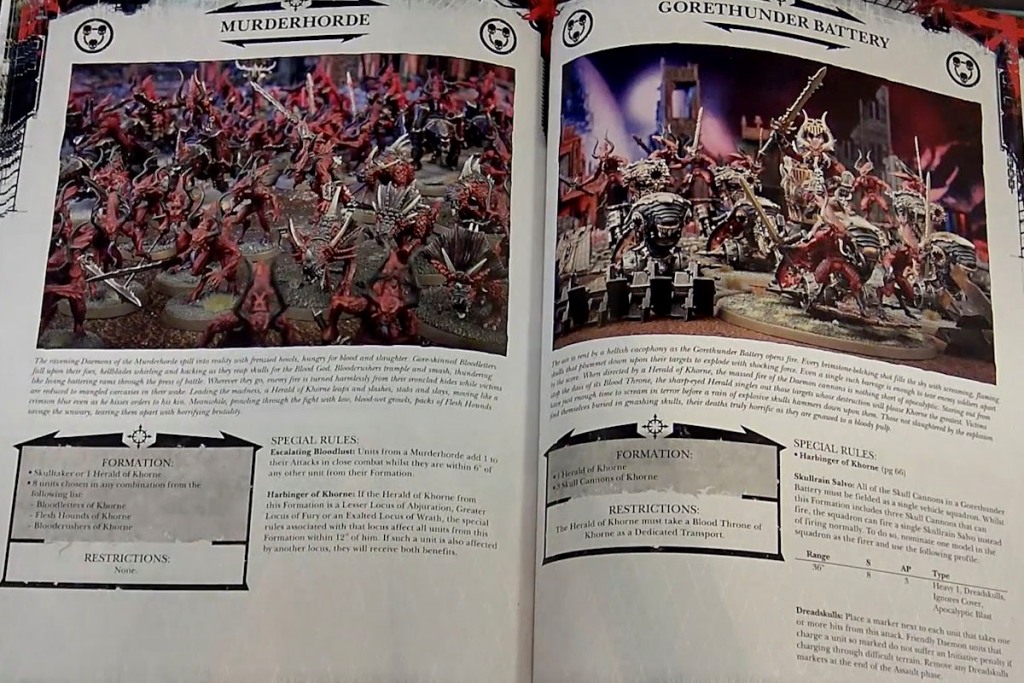 The Gorehound battery will let you fire an apocalypse sized blast, it’s a bit expensive but pretty good nonetheless; and certainly a good choice in a bigger game.

The Warpflame host is one of my Top 3 picks in this book. You can slide in the Exalted Flamer of Tzeentch, the locus also stack, and they can add +1 Str to the warpfire. The storm of Demonic Fire rule adds another 1. So even the horrors can go up two points of strength. So many different ways to combo and boost up these attacks that they can become a brickhouse of power against anyone that gets in the backfield. Put a Grimoire on this unit or a forewarning and you can get them down to a 2+ re-rollable save! Shoot on a squad of 20 that’s going to wreck a lot of units without D-Stop. Or make it Tar Pit time for those non hit and run deathstars!

The Burning Skyhost formation let’s you take screamers or chariots and synergies will with an Exalted Flamer on a chariot. 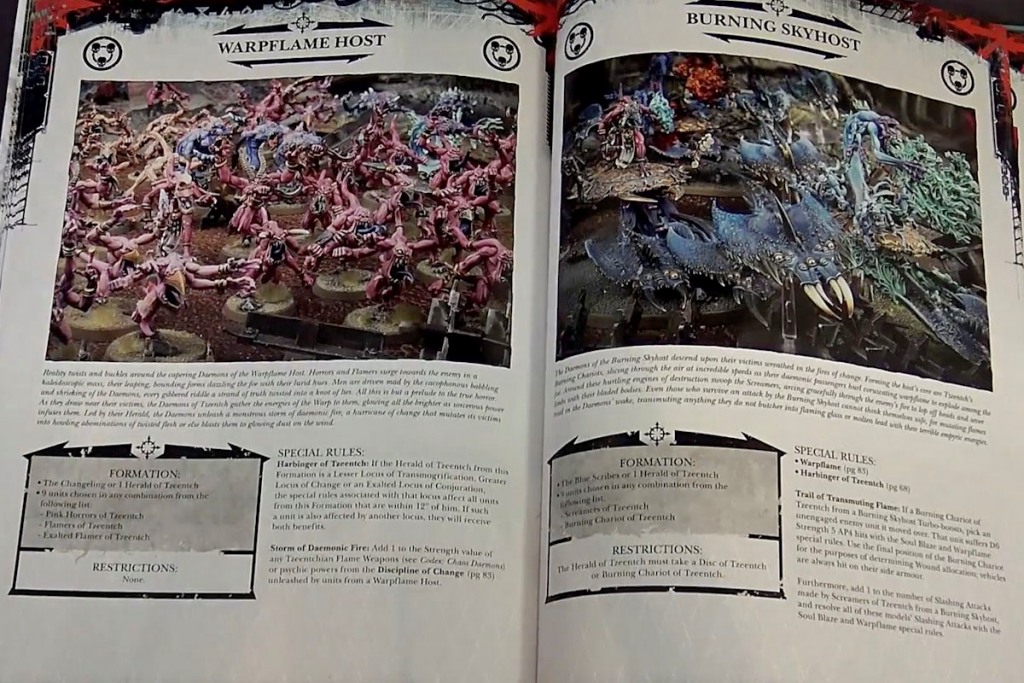 The Tallyband, which was in one ofour battle reports recently, do work holding objectives because they’re so hard to kill and they deep strike in. Seven squads of these guys are better than a drop pod. They’ll last longer against dedicated assault troops than a drop pod will. Plus, who doesn’t love seeing shambling plaugebearers. Solid formation. Again, the locus stack and extend out further. 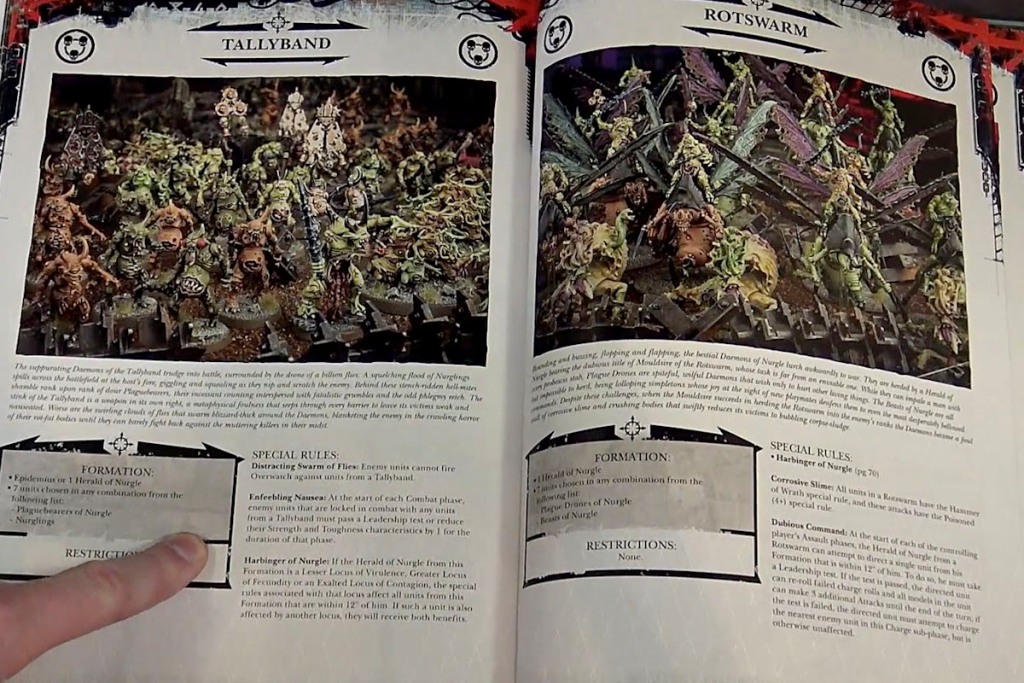 The Rotswarm is interesting, you take individual Beasts of Nurgle and that’s a brickhouse of power that are also difficult to kill unless you have a lot of high strength shots. They have a solid state line, solid resiliency, and are just good all around.

The Flayertroupe and the Grandcavelcade are very meh. They’re okay, I just don’t have very many good things to say about Slaanesh. Sorry. You’re not going to see a lot of that on the table top I feel like.

The Infernal Tetrad is quite frankly one of the best, but also most frustrating formations because it’s not clear how it works. It can get really convoluted really quick, and I’m hoping their’s an FAQ on how it SHOULD work. Their combined might gets them in a great place above the Instant Death threshold, and you could share the warlord trait. The formation will probably run you around 1300 points.  You can get them higher, but when you start stacking these abilities with the warlord traits you can get some near invincible units already IMHO. 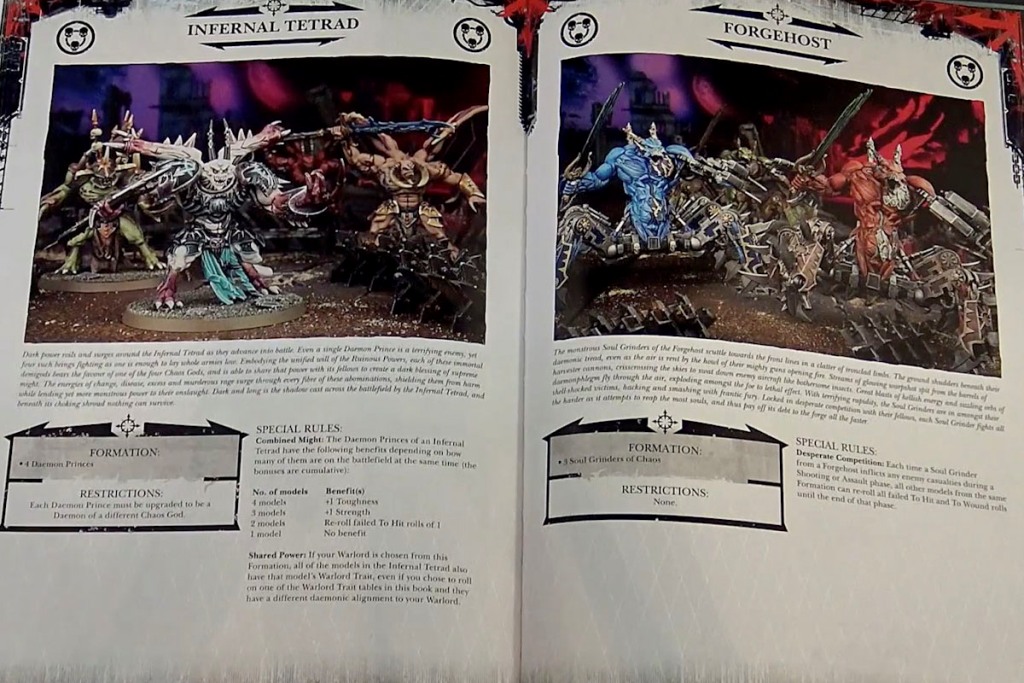 The Forgehost is a solid in combat. Soul Grinders are good walkers with their daemon save. If you have the points and throw it in there it’s a great first line formation.

And that is that folks! Daemon players got some great help in the form of Curse of the Wulfen and certainly a boon for any Daemon player or someone who is looking at starting a Daemon army in 7th Edition!

Author: Robert B
Robert is a veteran tabletop and miniatures gamer, and writer with over 20 years of experience. His specialtiesies are the worlds of Game's Workshop's Warhammer. He began writing for BoLS In 2010.
Advertisement
Chaos Daemons Tactics Warhammer 40k
Advertisement 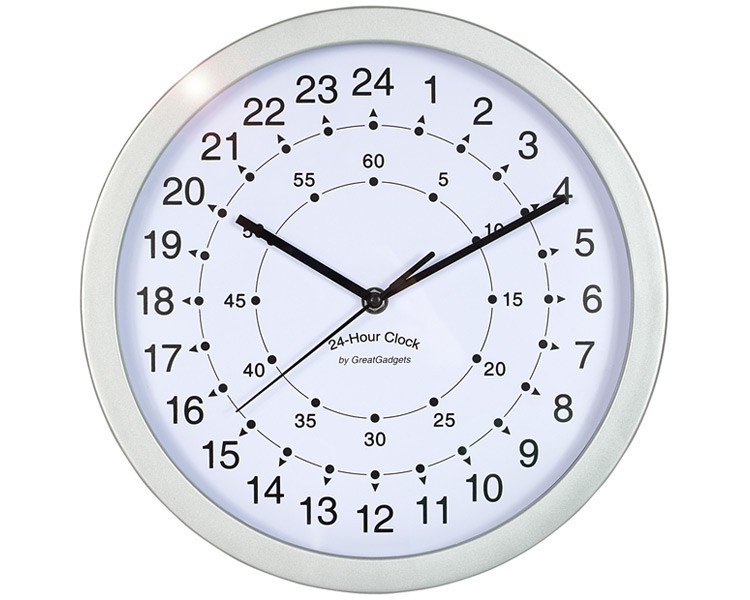