5 Things You Need To Know About Angels of Death

If your confused about the new Angels of Death book, or just want to know if it’s worth picking up checkout the 5 Things You Need To Know below!

Death from above! Well the new book is finally here, and it may quite possibly put the 40k competitive scene on its side for a while until everyone adjusts. But what is in here that’s so good, and why is every one confuses about who can take what?

The new book is strictly a supplement for the 2015 Codex Space Marines, and no other book. Remember per BRB pg. 118 “Codex” Space Marines are their own separate faction.

The new book contains generic formations from the Kauyon book that are now “unlocked” for all marine chapters in the codex, along with the new Anvil Strike force that’s a vehicle centric detachment, and rules for using the Betrayal at Calth miniatures in games of 40k.

These also are only for the faction “Codex” Space Marines and no other book.

Angels of Death outlines the 28 new Psychic Powers for Space Marines, and states that they can be used by the Space Marine faction as well. However remember per the psychic cards set themselves, as well as all the advertisements from Games Workshop they are for ALL of the Space Marine codex books; Dark Angels, Blood Angels, Grey Knights, and Space Wolves! 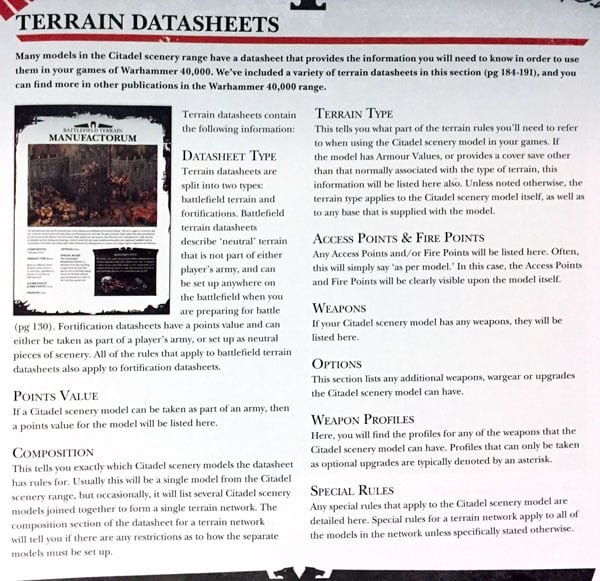 The number 6 power Shifting Worldscape on Geokinesis allows you to move terrain around the board. There are of course a few caveats to the power itself, but the thing every one seems to be talking about is if you can move fortifications you purchase (i.e a skyshield landing pad) around the table.

The rules for Terrain Datasheets start on pg. 183 of the BRB and sure enough they seem to be classified as “terrain”, however the rules for many of the items that have the internet buzzing are over in the Stronghold Assault book: 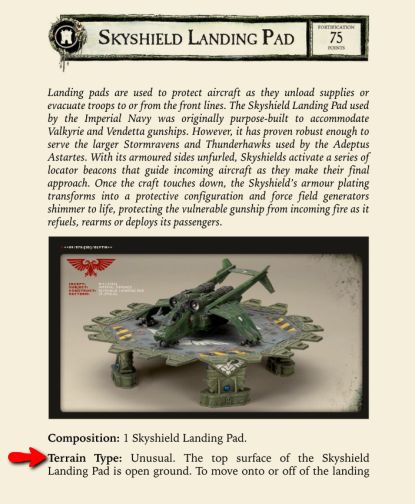 Will we see skyshield landing pads DJ roomba-ing around mountains of troops and or warmachines in the near future? Well RAW that is a definite possibility as they are classified as “terrain”.

Okay so what’s really new in this book? Here’s the list:

What do you think of the new re-print with new content sprinkles format?