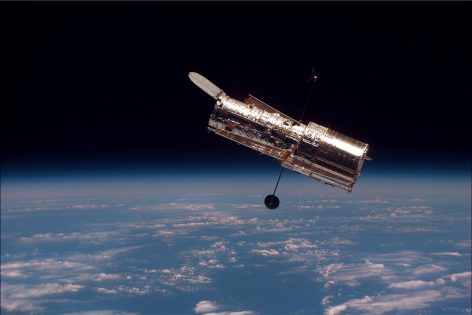 The Hubble will be 26 years old this Sunday – and it’s already got a BIG party balloon!

Yesterday the telescope photographed this giant Bubble Nebula created by a massive, super-hot star that resides about 7,100 light-years from Earth in the constellation Cassiopeia. The Bubble Nebula – NGC 7635 – is 7 light-years across. 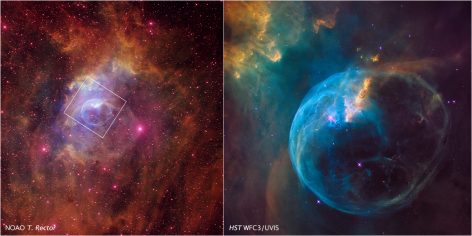 “The seething star forming this nebula is 45 times more massive than our sun. Gas on the star gets so hot that it escapes away into space as a “stellar wind” moving at over four million miles per hour. This outflow sweeps up the cold, interstellar gas in front of it, forming the outer edge of the bubble much like a snowplow piles up snow in front of it as it moves forward.

As the surface of the bubble’s shell expands outward, it slams into dense regions of cold gas on one side of the bubble. This asymmetry makes the star appear dramatically off-center from the bubble, with its location in the 10 o’clock position in the Hubble view.

Dense pillars of cool hydrogen gas laced with dust appear at the upper left of the picture, and more “fingers” can be seen nearly face-on, behind the translucent bubble.

The gases heated to varying temperatures emit different colors: oxygen is hot enough to emit blue light in the bubble near the star, while the cooler pillars are yellow from the combined light of hydrogen and nitrogen. The pillars are similar to the iconic columns in the “Pillars of Creation” Eagle Nebula. As seen with the structures in the Eagle Nebula, the Bubble Nebula pillars are being illuminated by the strong ultraviolet radiation from the brilliant star inside the bubble.

The Bubble Nebula was discovered in 1787 by William Herschel, a prominent British astronomer. It is being formed by a proto-typical Wolf-Rayet star, BD +60º2522, an extremely bright, massive, and short-lived star that has lost most of its outer hydrogen and is now fusing helium into heavier elements. The star is about four million years old, and in 10 million to 20 million years, it will likely detonate as a supernova.”

For more photos – you know you want a new desktop image – check out the gallery here.

Author: Mars Garrett
Pop culture staff writer that has been on the BoLS team since 2010. Contributor on the One of Us podcast. Marvel, Vertigo, and dystopian sci-fi fan. Enjoys bad movies, amazing stunt performances, and the internet. Hates rom-coms. (she/they)
Advertisement
Pop Culture Science & Tech
Advertisement

Geekery: Long Live the One Liners! 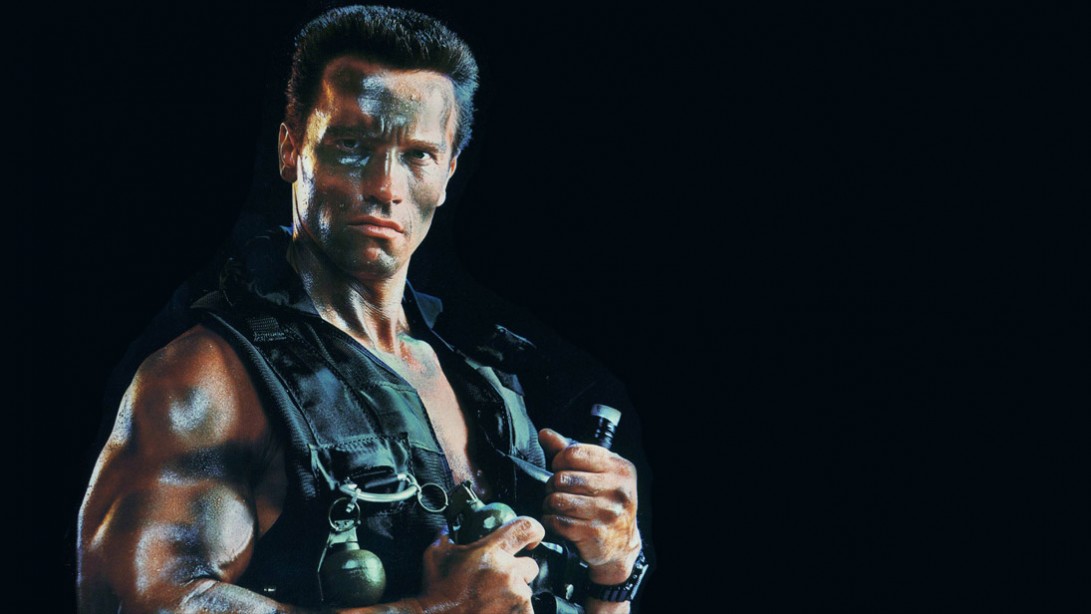