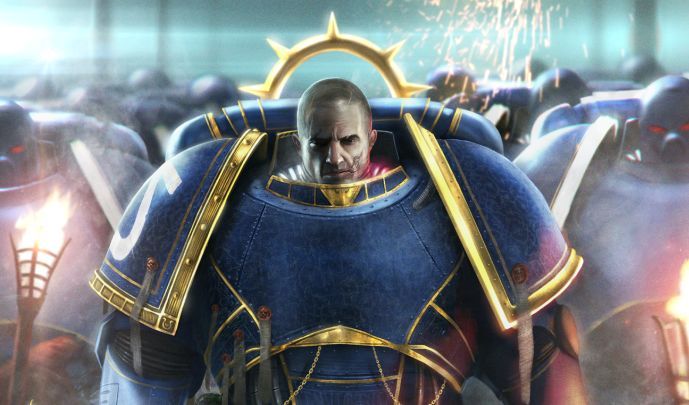 Come see the Ultramarines battle their brothers the Superfriends in another inside the mind of a tournament player battle report!

One of the Greatest of All Time, Robbie B is coming in hot with the second game of Inside the Mind of a Tournament player.

Today, we’re bringing Frank, with Tigerius, Two Storm Talons, a Storm Raven with Terminators, a squad of 3 vindicators; spraying templates in your face, and a healthy side of a Void Shield Generator to complete the meal.

“I really enjoy maelstrom, I seriously forget how much I enjoy it,” Rob said. 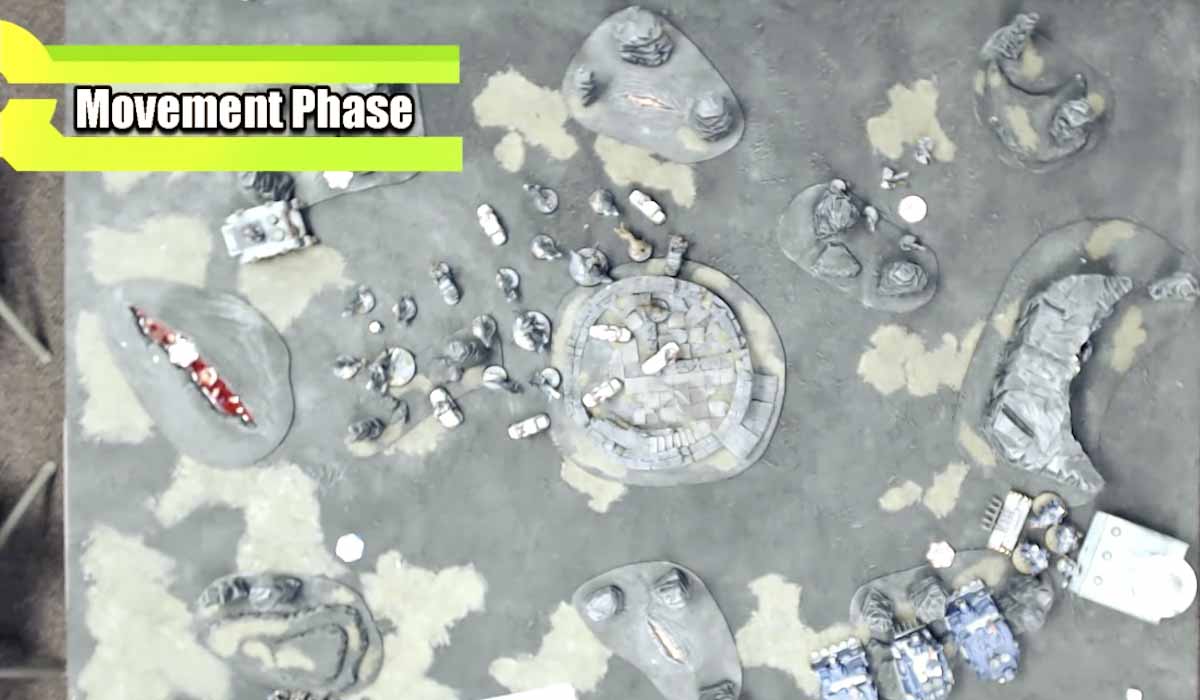 For two Armies  that are made of taking a dump in each others cereal, they initially didn’t go to crazy in the movement phase and get out of position.

“Yeah, Frank actually jumped ahead in the beginning because he was able to score on some objectives right next to him,” Rob said. “So initially, I wasn’t too sure what he would want to go after so I just want to take control of the middle part of the board and go from there. He was really worried about me getting into his vindicators and I figured what he was doing so I was able to counter that.” 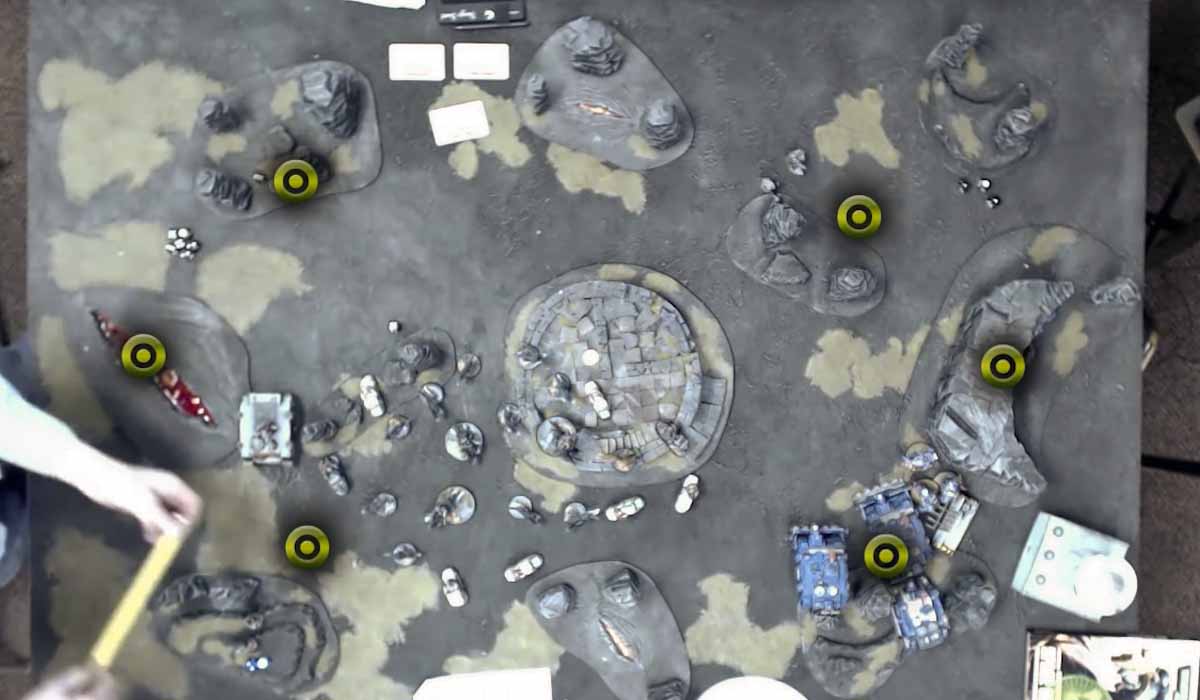 Frank used some really great Rhino wall tactics here to shield Tigerius and his centurions, he’s going to shoot the grav into the super friends, and get forewarning and invisibility on the vindicators which is really going to neuter any kind of attack Rob is going to get on the charge.

“I felt I just needed to punch one to get into the squishy centurions,” Rob said. “Also another thing I want to touch on, in so far as playing with your opponent, his intent was to keep his centurions blocked but he had moved his Vindicators too far forward and I was like, ‘dawg, you need to push one of those Vindicators back or I’m going to be able to get you.’” 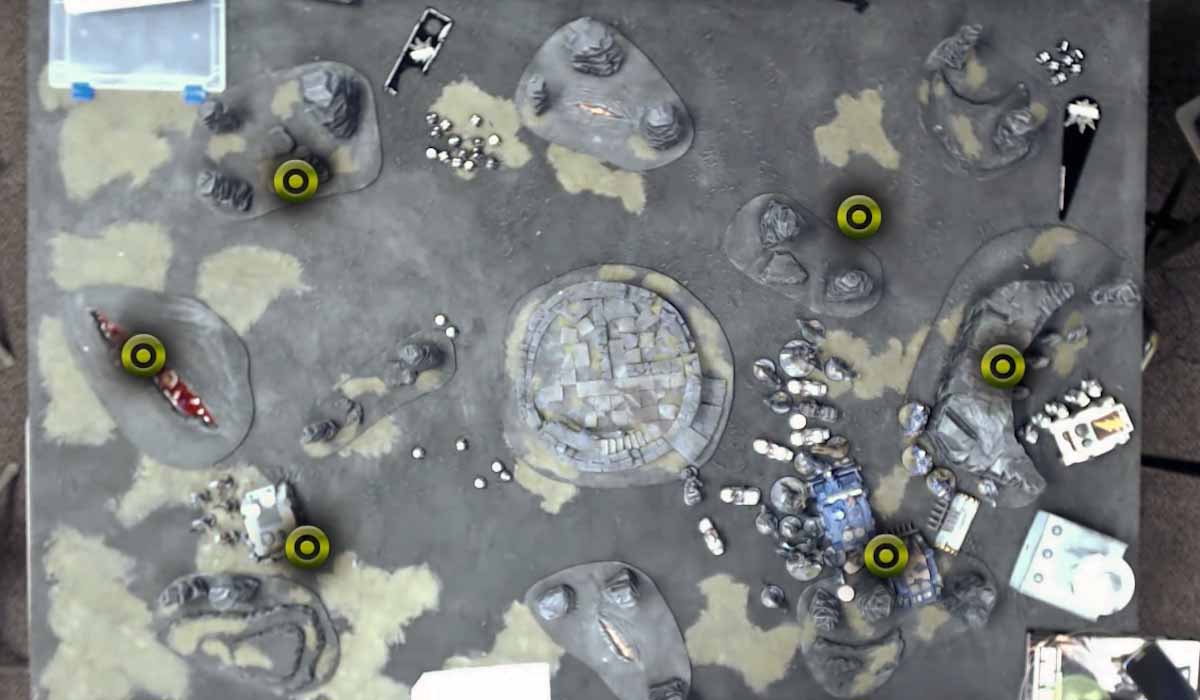 Social contract 101: Play with each other not against each other.

One of the maelstrom missions for Rob happened to line up with taking out a squad of scouts on an objective. Then he got a really good charge roll off and was able to take out a vindicator, the assault left him really bunched up but he was able to really crowd around the vindicator which meant that Frank couldn’t move that vindicator forward without tank shocking and he couldn’t do that and maintain line of sight so he’s going to have to leave it there to fire off those strength 10 shots at the super friends.

In the psychic phase invisibility fails which meant that Frank was going to have to do the Lords work with his vindicators if he’s going to survive the next round of assault. The smaller templates do a lot of work since everyone is bunch up and crushes the super friends. 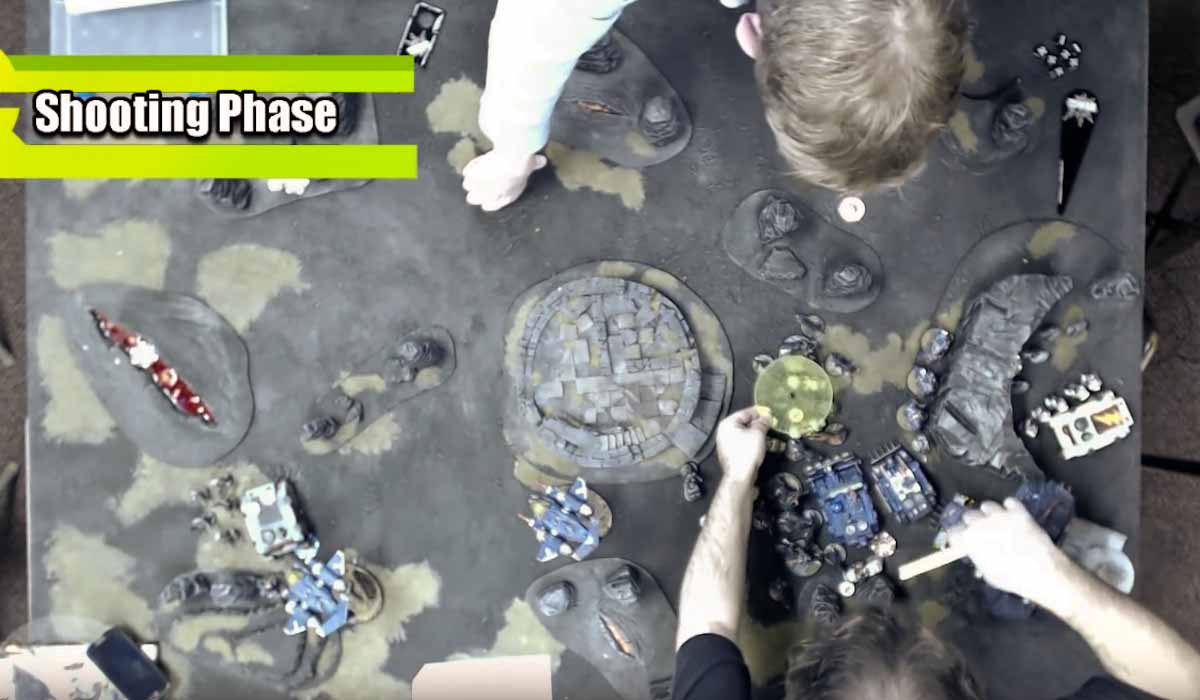 “yeah, strength 10 on a template of models all bunched up is never a good thing for the super friends,” Rob said. 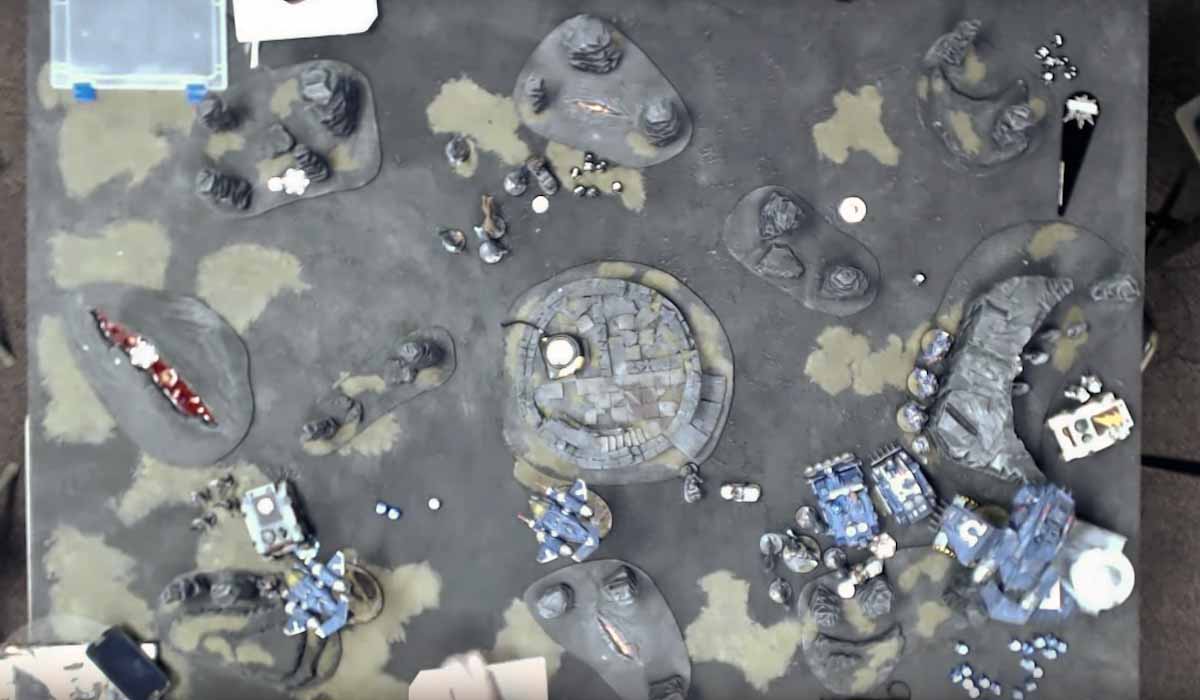 The good news for Rob is that he gets to swing at both those vindicators in Frank’s turn, since he didn’t move them, which allows him to convert both those vindicators and leaving Rob free to take what’s left of his super friends to jump in on the non-psychically buffed centurions. Further, Rob gets a maelstrom objective calling for killing an enemy Psyker along with Slay the warlord and crush a major threat.

“I got a ton of maelstrom points in this turn, it just started working out where I started to pull ahead but he’s not out of yet. He still has a unit of terminators and a dreadnought in the Stormraven.”

Looking at the video, knowing Frank still has a squad of fresh terminators and a dreadnought in the Storm Raven and I had no idea how Rob was going to survive.

“My big thing was trying to position myself so I didn’t assaulted by them at the same time, however, that didn’t work out for me and he got both of them into assault.” 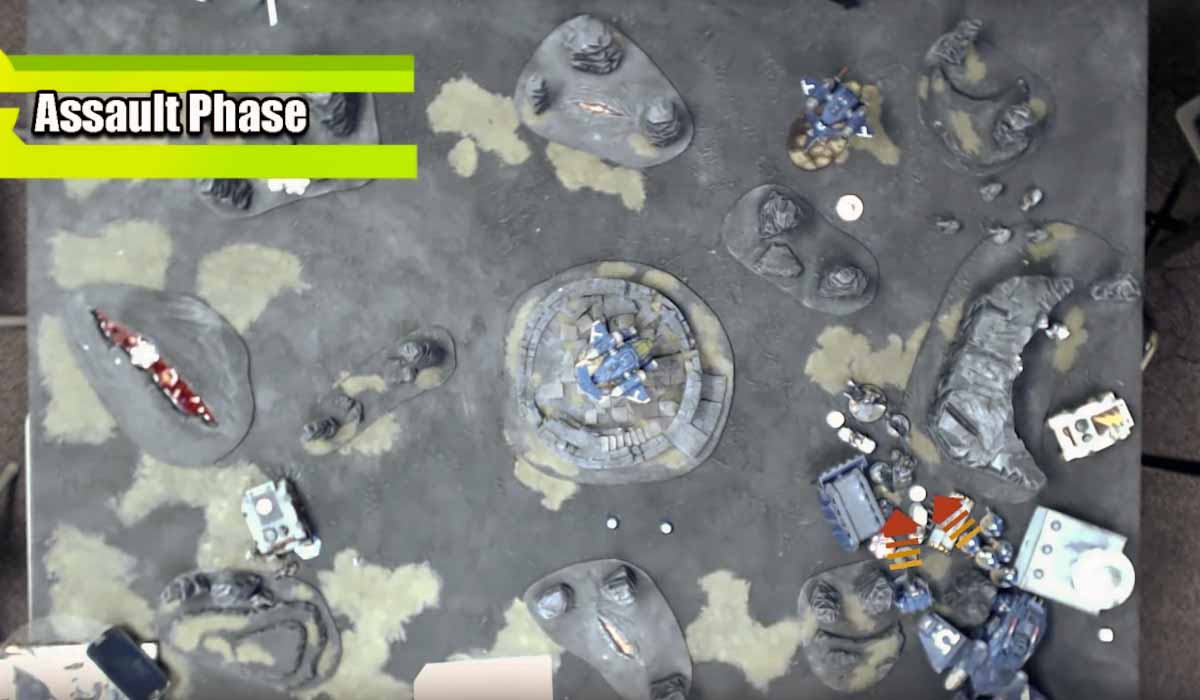 Regardless, the unexpected happens at the badly beaten, but undefeated, super friends go to town on the Terminators and the dreadnought.

“At the end of the day, if you’re playing Super Friends, you have to make 3ups, I didn’t roll so well last game but this game the dice came in clutch.”

That’s a huge turning point of the game and Frank knows he’s going to need to get this game to go to turn 6 with all the points Rob is raking up.

“I knew he still had his air power so I was trying to hold on to with what little MSU I had left. I know I need to take down the storm talon that’s shooting up my squads in the top right,” Rob said. “Looking at my assets I see my Iron Priest and say to myself, well, I got the solution right here.” 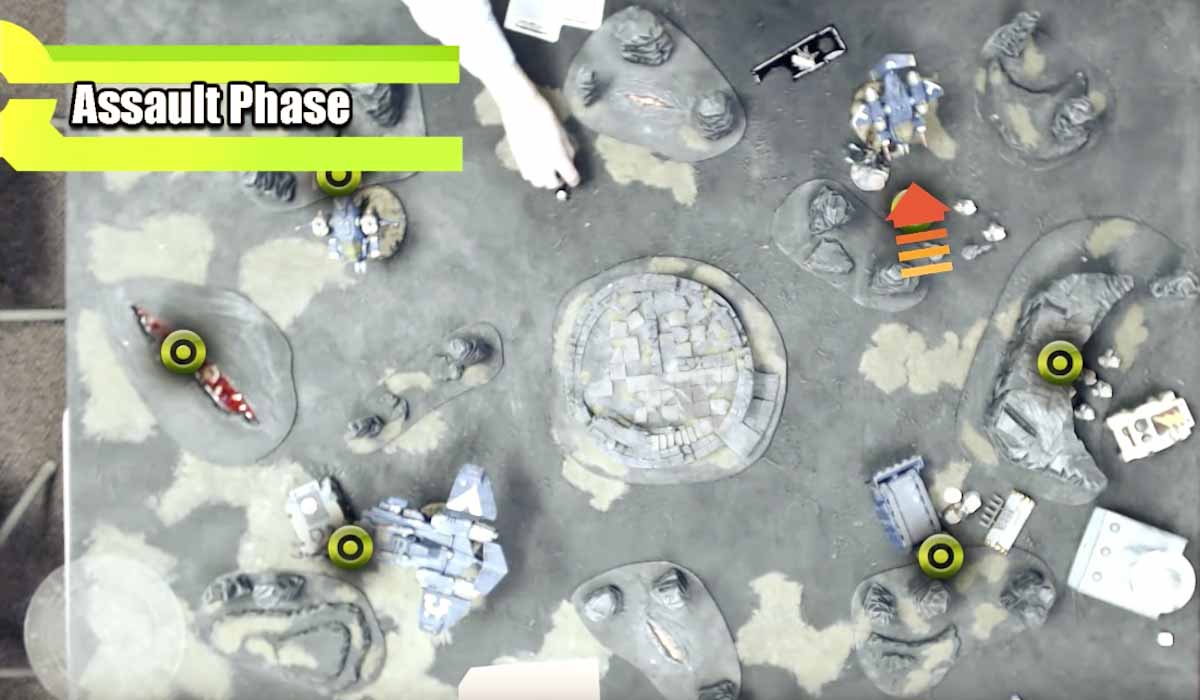 A lot of people don’t realize or remember that the Iron Priest has fleet and don’t think that making such a long charge is possible but Rob demonstrates right there and gets his Iron Priest into assault with the Storm Talon. That’s why fleet exists, to take these chances at the end of the game. The Iron Priest does the work and pulls out a big victory.

I have never seen a game in which so many units died so fast, it was ridiculous the amount of firepower you guys both had and how much died so quickly.