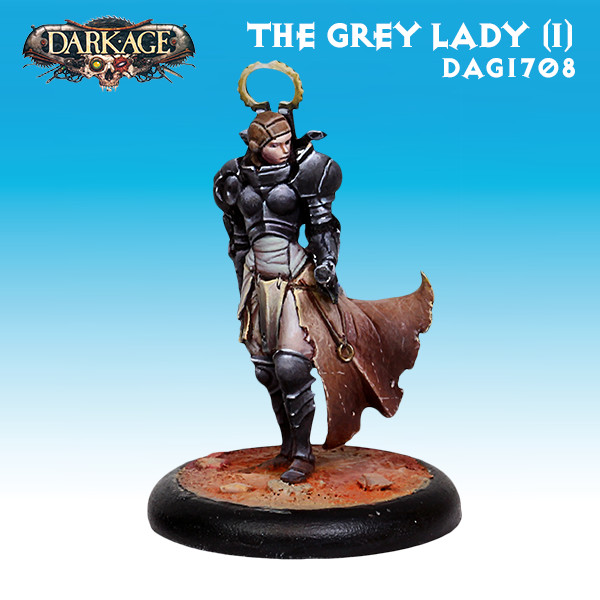 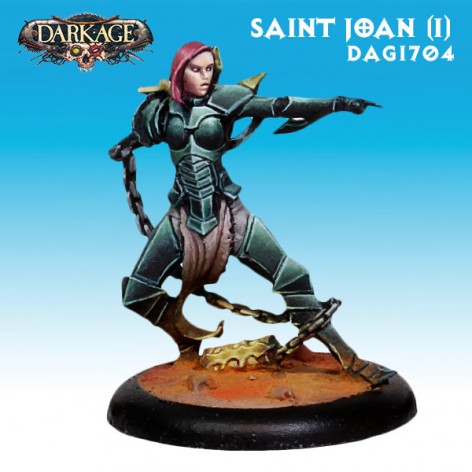 Last March, another new Saint was unleashed on the Wasteland. Let’s take a close look at Saint Joan. 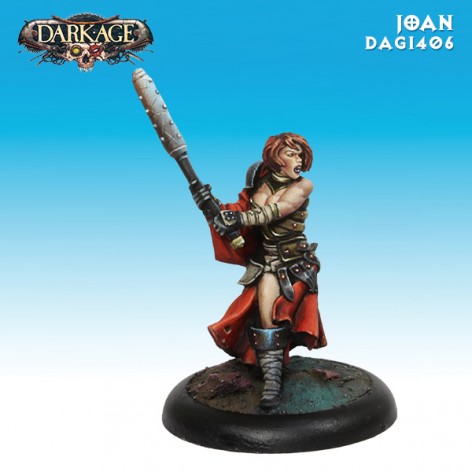 Dark Age fans were introduced to Joan in Dark Age Fanaticism. Joan’s mother was the sole survivor of a Skarrd raid. The savages uncharacteristically chose to leave the woman alive and uneaten. It wasn’t long after being taken in by a nearby community that she realized she was pregnant. She died shortly after bringing Joan into the world, never having truly recovered from the ordeal. Young Joan was lucky the kind people that raised her never thought to ask about her pale skin, strange demeanor, or unnatural strength. With few other opportunities, Joan joined the Forsaken military at an early age. 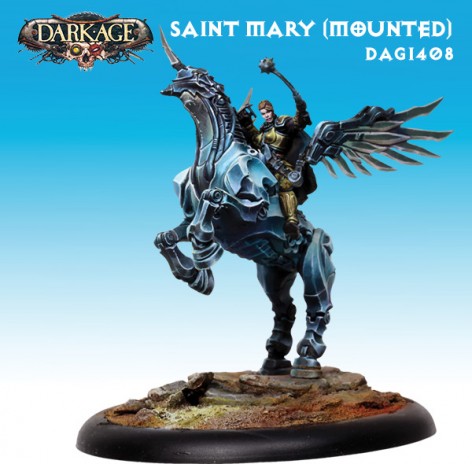 This is where she met Mary. Those with a hard time fitting in to the Forsaken military are often drawn to Mary’s side. Before long, Joan was one of Mary’s most trusted friends and confidants. Despite the bond, Joan remained silent about new powers manifesting within her – powers which could only be explained by her Skarrd parentage. Her ability to see briefly into the future could mean her death among the devout Forsaken, always wary of a witch. Though her powers saved the lives her allies many times they were dismissed as good luck. Or perhaps her friends were prudent enough not to ask dangerous questions. 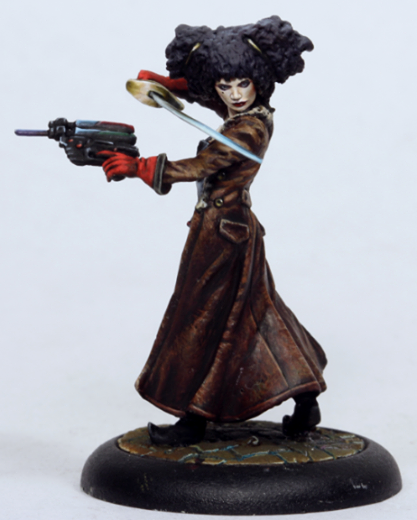 Joan and Mary might have remained fighting side by side if it had not been for the intervention of Lilith. Always on the lookout for anything to exploit, Lilith was able to see Joan’s abilities for what they were. Rather than threatening to expose Joan, Lilith approached her as a friend. Her claim was that she wanted to use her position and resources to help Joan keep her powers secret while learning to use them better. In the end, she was able to draw the young woman to her side.  Lilith had long been looking to groom a Saint of her own. As powerful weapons of war in their own right, and beacons to the Forsaken people, such a figure could greatly increase Lilith’s power.

With the training and resources Lilith is able to wield on her behalf, Joan has grown powerful enough to be earn herself a Sainthood. She’s even managed to remain seemingly independent of Lilith, though there’s no telling how long this will last. The troops that flock to follow Joan make Mary’s eccentric force seem positively mundane. There’s something about the pale saint that attracts the morbid and morose souls that join the ranks of the Sin Eaters and the Death Knights. Joan’s most devout followers may even end up in the ranks of the Furies. There are only ever three at a time, but they don’t usually live to retirement age so there are openings pretty frequently. Joan has also been given control over the Inquisitors. These covert agents, specialized in rooting out supernatural threats, have suddenly become relevant again after Amabilia of the Dragyri Shadow Caste possessed dozens of Forsaken citizens with horrifying shadow creatures.

And here’s Saint Joan. Before I discuss her rules, remember that they are free to download at the Dark Age page under the Downloads tab. This link will take you right to them.

Joan doesn’t seem like much at first. She doesn’t pack a big gun or hammer like Mark or Luke.  She’s not about a stat-line though. Scroll down that page a little bit to see her Psychogenics. Joan has kept the Precognition Psychogenic which has proven helpful when taking the original version of Joan. It’s even easier for Saint Joan to succeed when casting this helpful psychogenic.

Horrific Visions on the other hand is a debuffer. Not only can it give a Panic Counter to models that are normally immune, its also a way to bypass particularly high ARM. Remember a model with a Panic Counter is already -2 PS, so if you’re attacking them with Visions with the intent to damage, they’ll be rolling at a net -4 PS. This makes this attack a pretty good weapon against really tanky models like Luck’kit’Kaii of the Ice Caste. Unfortunately Horrific Visions has no effect on models with the non-living ability. Watch out for CORE. If you don’t want to/don’t think you can kill your target you can toss a Judgement Counter on top of their Panic Counter with the Sinner’s Reward Psychogenic. Then they’ll have to waste a couple of APs on pS checks trying to clear the counters or activate with some serious debuffs. Once you’ve picked a favorite psychogenic, don’t forget you can cast it a third time for no AP with Masochist.

For those non-living models (well anyone really), Joan’s whip packs the Whiplash ability which can force enemy models to have to burn through AP. Against hordes of troops, her whip is also pretty strong since it has Arc and can actually get hitting pretty hard after a couple of uses thanks to Empower. Joan can also heal herself with melee attacks so you’ll probably want to send her in from time to time to heal back some of those Masochist wounds. 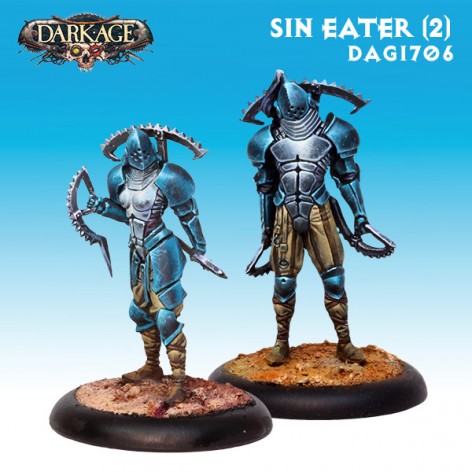 The Sin Eaters are one of two of Joan’s specialized rank and file troops. They can shred masses of troops with their two high AS attacks per AP. They’re also not bad against Tougher targets with Panic Counters as they have Sadistic. We were just talking about a model that hands out panic counters weren’t we? If you’re willing to damage the Sin Eaters and trigger Masochist they also get Rend (the rule for Rend isn’t on their card due to a typo, but you can find it on the next page in the doc under Ariel’s entry). Then if they finish off whatever you sent them after, they’ll heal a wound thanks to Fueled by Combat. If they don’t finish it off, hopefully you’ll have a medic around. With so many Masochists in this list you’re bound to need one. 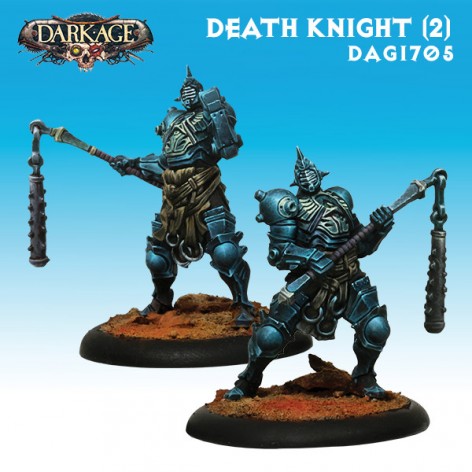 The Death Knights are more of a blunt instrument than the Sin Eaters. They have a higher Pow, but only one attack per AP. Their Masochist triggered ability is Empower. If they can manage to spend all their AP on attacks in their activation they can be pretty reasonably expected to damage even the hardest targets thanks to all those power multipliers. Especially with that Sadistic/Vicitimize combo they have going. While the Death Knights can’t heal themselves like Joan or her Sin Eaters can, they do have Unstoppable and PS 16 so they’ll likely keep going for a little while even after they lose a couple wounds. 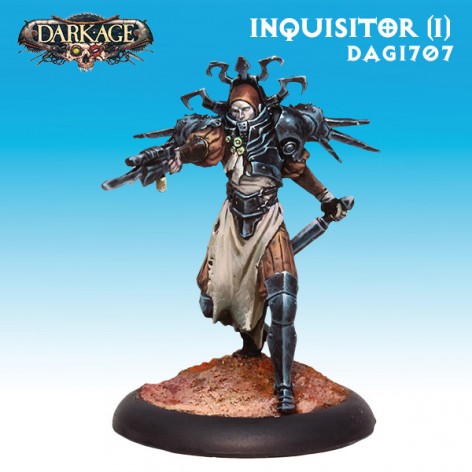 The Inquisitor, in addition to being a strong contender for my favorite Dark Age model, is kind of a linchpin for a lot of the cool tricks you can do in a Joan list. His money ability is Suppression: Never Panic. As long as your Sin Eaters or Death Knights are targetting models within 8″ of him, they can Victimize all sorts of living models that normally wouldn’t care. As a Commander he can Squadlink with either unit to help him keep them in his bubble. He’ll even Incite them in the bargain giving them a bonus to AS. He’s not stellar in melee, but his Spray weapon is a rarity in this force with few ranged attacks. And he can use Human Shield to have allies soak hits for him. 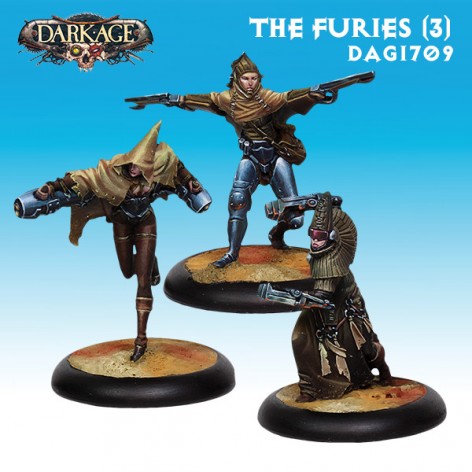 The Furies are an intriguing little three character unit. Each of them do something a little different. Salome will give you more accurate Sprays. Hers even have Knockdown and Critical Strike so she’s a great target for Precognition. A re-roll is another chance to roll a critical hit. Ariel’s Power Gauntlets hit pretty hard, and their Blinding Shockwave ability adds to a Joan force’s wide array of debuffing tools. Tania is another powerful ranged model. Her Single Shot (which ironically can be used twice) has Blast 1. With a little luck you might be able to hit multiple models.  Her RF1 Barrage attack can be even more devastating with Proximity Strike 3, but it has low Assault so you probably won’t hit every target. Especially if someone else in the force has panicked them already. 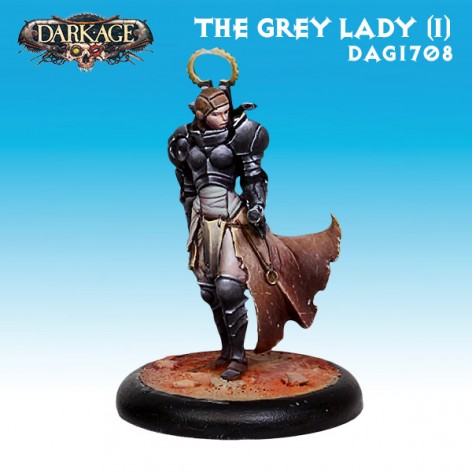 The Grey Lady is one of the most interesting characters available to the Forsaken. Old Samaria had a Nostradamus by the name of Zebadiah Stane. His visions saved a lot of lives immediately following the collapse, and he had many more predictions about events further off. The Grey Lady was his personal bodyguard. Somehow she has begun to appear again in the current timeline to assist the Forsaken people in this time of strife. Joan was apparently pivotal to Stane’s visions since the Grey Lady only shows up when the Pale Saint or her followers are around.

At 175 points she’s more expensive than Joan herself. While she’s quite resilient, and hits like a ton of bricks, her impressive stats still don’t quite justify her very high points cost. Except that she also has Assassinate, meaning you put her wherever you feel like on the table. This will let her pick the most juicy enemy target and deploy in a position to terminate it with extreme prejudice. Anything that survives to strike back against this DEF 4 model risks a retaliation strike. This should pair very well with all the Panic counters that should be on the table dropping model’s AS scores. The Grey lady may end up killing more models outside of her activation than during it.

With all the choices available to her, its hard to decide how to run Joan. Especially with the Grey Lady eating up such a big chunk of points. The two of them together are nearly half of a 750 point force. This means a Joan force will be one of the most inexpensive to collect, but you won’t be able to squeeze in all the cool models you might want. Of course if tournament play is your thing, you’ll have a sideboard to handle some overflow with in the new set of rules.

As for me, I think I’m going to start with the following:

The Medic can Squadlink with someone to try to keep her from lagging too far behind. The Inquisitor will use his tricks to make the Sin Eaters even better. The Grey lady should be able to beat down almost anything else. The Furies are a toolbox that can address multiple threats. I think this list should perform well but even if it doesn’t, they’re a bunch of very cool models so they’ll be fun to paint and look good on the table.

Another strategy you could try with Joan is to use her ability to hand out panic counters and other debuffs and capitalize on models with retaliation. Here’s a 750 list with that in mind.

Hopefully I’ll be able to do a batrep with them when I’m finished – regardless of what list I end up with.

~Thanks for reading. What do you guys think of Saint Joan?

Author: Ben Williams
Ben Willimans is a Professional Painter and Columnist at Bell of Lost Souls. He has been involved in the hobby and art side of miniatures and the tabletop gaming industry for over 20 years. He has won multiple national painting awards.
Advertisement
Dark Age Lore Tactics
Advertisement