Warlord Games takes you a hobby trip inside the making of a North Africa army for Bolt Action.

With the advent of Duel in the Sun, Carl Titterington, Andy Singleton and Sam Phillips have donned their sun cream and goggles to begin ‘Operation Sand Dune’ – In part 1 they were gathering the forces, and now we get to see and hear from them as they take the project deeper into the desert!

A month has raced past since the last update and we’ve all been busy toiling away in our workshops. Sam has produced an extraordinary amount of SAS, while Carl has been labouring away building terrain which you can see here:

And I’ve been nailing Panzers together.

We’ve recently gathered together for a hangout too to discuss how we’ve been getting on, which you can see here… Until next time, happy gaming!

Following on from the webcast with Andy Singleton and Cart Titterington, I went to consult the British Armies book and the Duel in the Sun supplement. I opted to choose units from the Behind Enemy Lines theatre selector, enabling me to field a lightly armed, but fast force capable of getting me into the action fast, and equally getting me out if the fight gets too hot!

One key rule that I like about this force, is that everything must have its own transport. With this in mind, my first point of call was the basics, that being infantry, and the Bedford trucks. I added the stowage taken from the Recce jeeps, adding to the overall theme of the force that they carry what they need with them. Taking the SAS unit from the Duel in the Sun book, I opted to go for two units of 8 men in each. Each man carries a rifle and a pistol, and can also be upgraded to carry a SMG. I decided to equip one squad with rifles and the other with SMGs – the reason for this will be given in a future article! What they lack in numbers, they more than make up for in extra firepower as each squad can be given two LMGs or upgrade to Vickers LMGs, giving them an extra dice when shooting. Opting for the heavier weapon I used Warlord Games British Airborne Recce jeep‘s machine guns, and with a little trimming, they fit perfectly onto the SAS infantry.

The Airborne drivers, Chindit MMG team and Chindit anti-tank rifle have been given a simple head swap, and the uniform will simply be painted the same as the SAS. With the jeeps I left off the basket at the rear of the vehicles, with one having the front baggage replaced with the comms kit from one of the LRDG trucks. This will be my officer’s jeep, distinguished by the simple conversion. It also tells a story – perhaps the jeep has pulled up and they are using it as a surface to check their maps and coordinates. A simple yet effective conversion, it fit snugly into the space. Next up we have the LRDG Chevrolet trucks, these will form my heaviest hitters. One of them will be armed with as many machine guns as I can fit on, whilst the other has been fitted with something a bit …heavier!
The option to include a LRDG truck armed with a light anti-tank gun is an opportunity not to be missed! After a lot of thought I elected to go with the BEF 2pdr light anti-tank gun. I chose this one simply for the part the gun sits on, as I thought with some tinkering here and there I could make the weapon fit onto the back of the truck. This required a bit of manoeuvring, and the leg supports were cut down significantly so that the gun can fit on what could be interpreted as frame that could have been welded on by the crew.
I may go back and give the SAS jeeps heavier weaponry, and perhaps mount a autocannon onto the other truck, space permitting of course!

Take a look back at the project here: Operation Sand Dune Part 1

And the LRDG/SAS Selector here: Army List: SAS and LRDG Author: Larry Vela
Dad, Gamer, Publisher, Pilot, Texan. All games all the time since junior-high. I started BoLS Interactive in 2006. I’m a lifelong tabletop & RPG gaming enthusiast, and internet publisher working to entertain and inform my readers every day. I've been playing RPGs and Tabletop Games since the 1970s. I'm been playing and covering Warhammer and Warhammer 40K for over 35 years.
Advertisement
Bolt Action Historicals Hobby Warlord
Advertisement 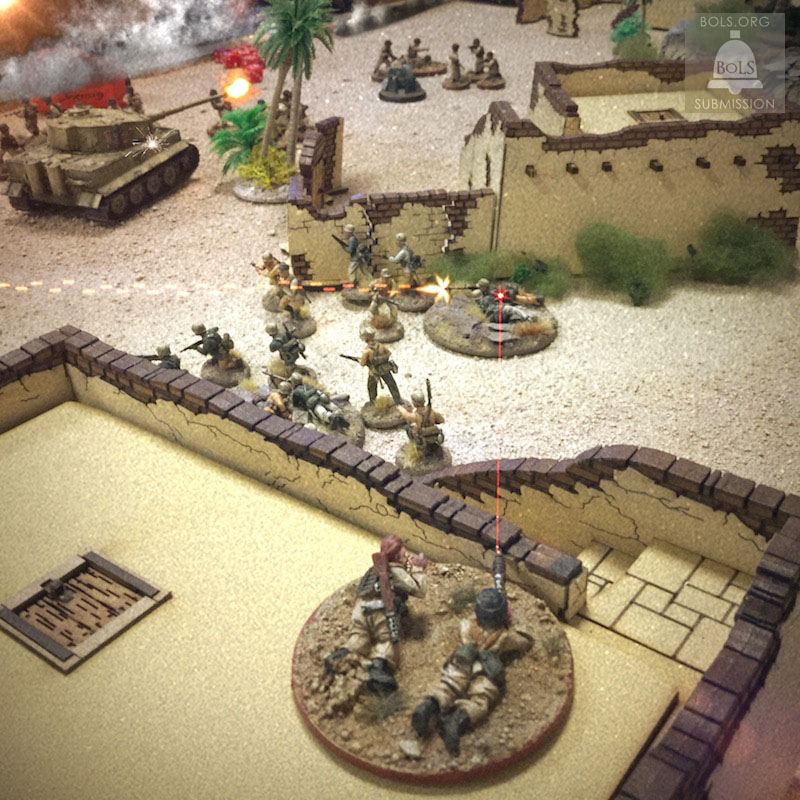