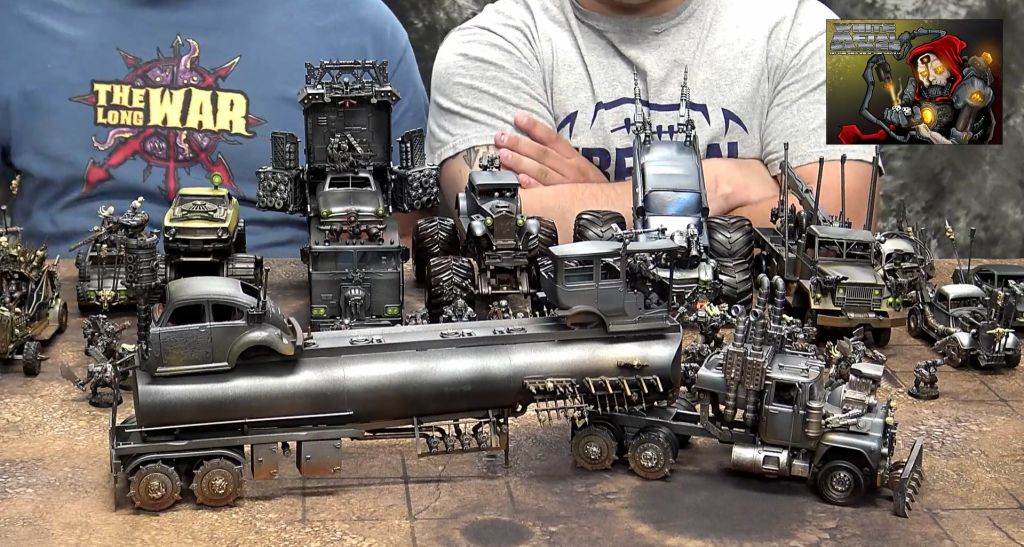 Austin A-Dawg, and Juice, are coming at you with an AMAZING showcase Army! We have a full day with this Army that will knock your socks off.

This army is so great that we’re going to bring you not one, but two, battle reports using this armyi:

Caleb Dillon, and his studio White Metal Games, they have sent us an  Ork Speed Freak army that has been converted to the Nth degree and it looks like it just came out of the movie. 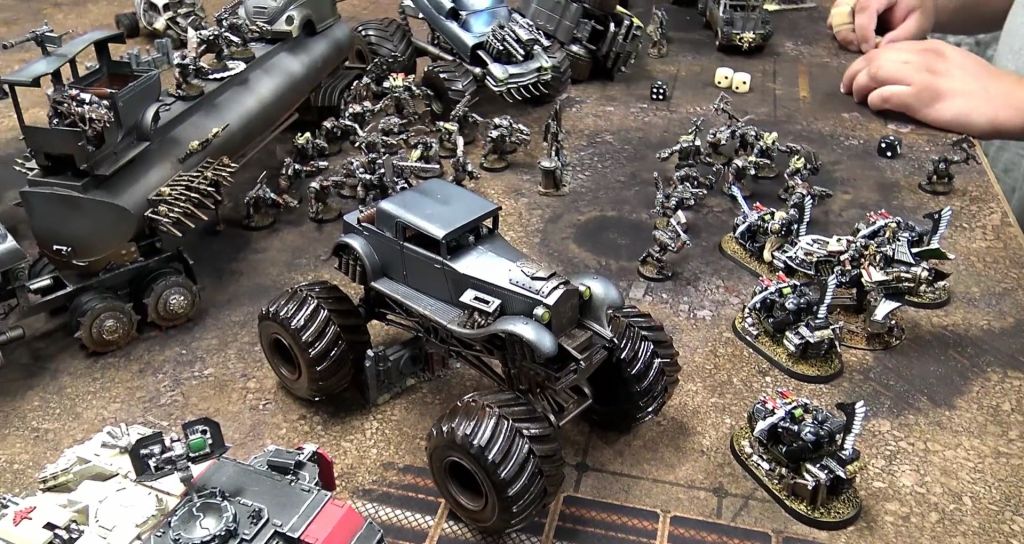 We’re changing up the game today, this is full on Narrative day. We’re incorporating everything from the terrain, to the models, to scenario. For the first time ever we’re bringing you a full day of Narrative 40k.

“We’ve got buggies, a squad of three, two squads of two, all with shootas, three trucks with boys and a nob with a claw in each, two Battle Wagons: The doof and the Giggahorse, which has 19 boys and the Warboss is ImORKan Joe himself.”

Our Warlord is Master and Blaster, Mastablasta, riding with the scorcha boys with all the flame everything. This is going to be fun. This is the epitome of bringing the hobby back. 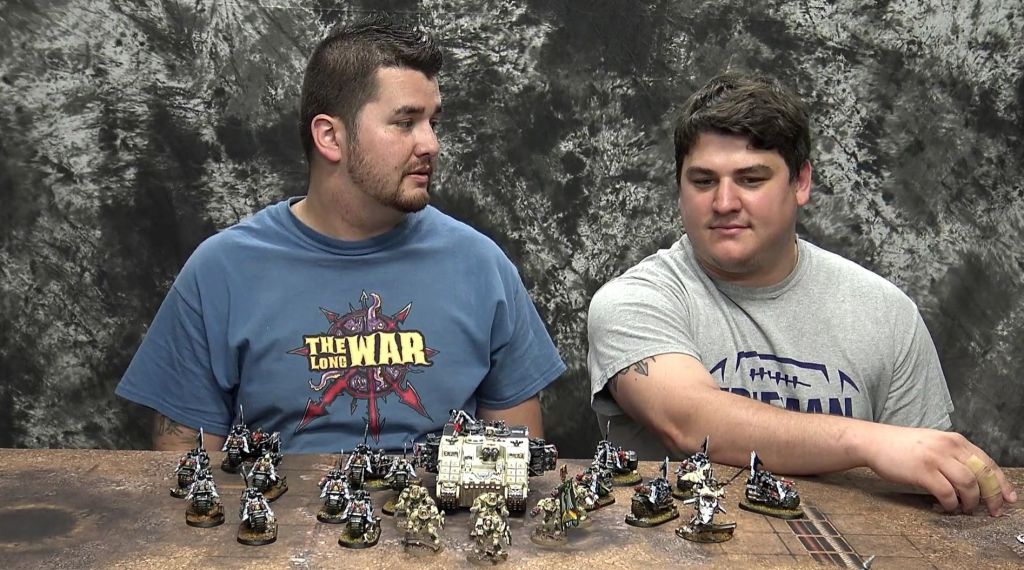 On the other end, we’re bringing and unbound army, yes, unbound, because we can. Sammael and Belial are teaming up, bringing all the bikes and all the tanks, those things need gas, so they’re stopping in with the Ravenwing Deathwing combo to take some fuel. Sammael himself is bringing, Black Knights, 4 man big, apothecary, and an attack bike.

Two squads of Ravenwing attack bikes with two melta’s a sergeant, an attack bike with a multi melta, and another bike squad with two flamers, a sergeant and an attack bike as well. Belial’s Land Raider needs gas too, so he’s coming in too with his Apothecary, banner, his two lightning claws, and his thunder hammer storm shield homeboy. A relic, the schism of mars, which ignores haywire on a 4+ but also comes with Tank Hunter. 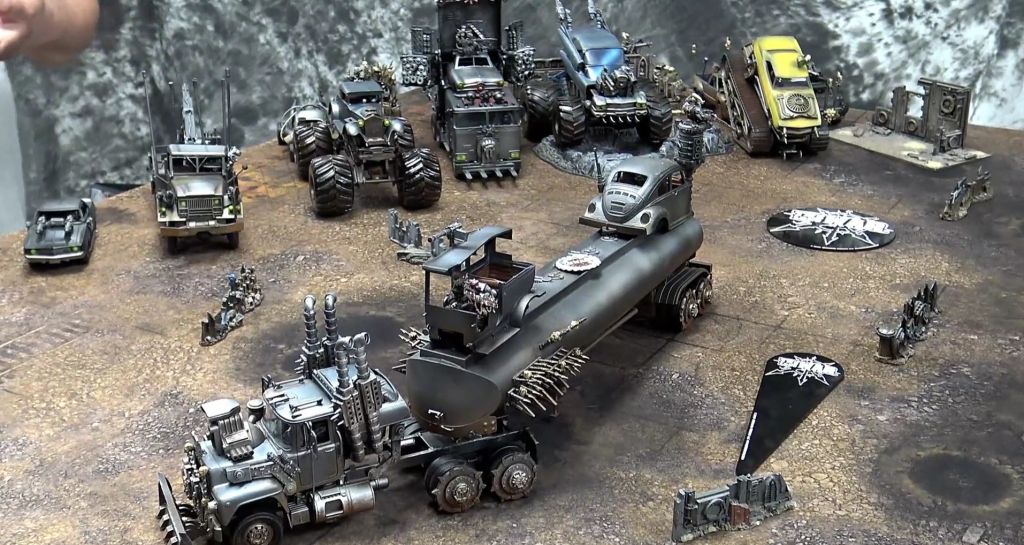 We’re bringing the Hobby back, in a good ol’ fashion showdown fighiting for some gas. I can’t imagine a better scenario.

All orks, base strength 4, 5 off the charge, because we’re having fun.

“This is Mad Max themed, Apocaolyse Orks are Base 4 dawn.” Austin said.

All burna’s are scortcha’s, period, because it’s themed. The Doof wagon in the movie shoots flames out of it so why wouldn’t this. We’re doing our best to fully embrace Narrative 40k and this is what we came up with.

This game is 4 turns because they run out of gas or warp off the planet. This is turn one night fight because it’s happening in the morning. Because the orks are home planet, they get turn one. If you want to see this game unfold turn by turn hit the link and we hope you enjoy it. If all you want to know is who won, well, scroll down. 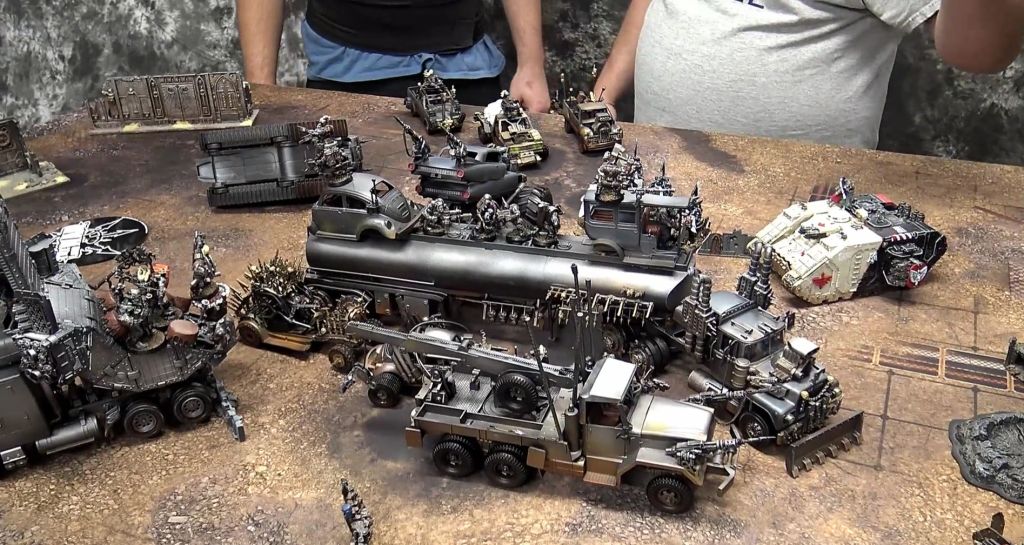 So, the Orks rush the War Rig, wrap it up tight and prevent Sammael and Belial from being able to take control of the War Rig. In the end, the Dark Angels have to cut their losses and leave the War Rig for ImORKan Joe.