The Forge Fathers are renowned for their battle-suits and firepower… learn how to use them in your strike team!

In this article, I plan to discuss how to incorporate models from the Forge Father Faction Booster set into your strike teams as well as describing strategies for using the strike lists from the previous article. When playing your games, don’t feel bound to use the lists I presented, be bold and experiment with different models to better suit your play style. Also, don’t forget to join us on Mantic’s forums to share your experiences and knowledge! In addition to providing additional Brokkrs and Steel Warriors, the Forge Father Faction Booster set also provides several other options for filling out your strike teams. One major addition is the Chief Brokkr, a hardy and capable leader, with an army ability that helps you secure better equipment. Valkyr are the Forge Father’s fastest model, wielding a mighty Twin Hailstorm Rifle, and are only a little more expensive than a Steel Warrior. If you want to contest objective markers early, there is no better choice. Brokkr Engineers, in addition to disarming booby traps littered around the field, provide you with a way to control the remote constructs of the Forge Fathers. Boom Bots are small, easy-to-hide mobile explosive payloads. They don’t move especially fast, but they deliver a huge punch. Hugging terrain, and using move action command dice will help get them where they need to be. Finally, the powerful Inferno Drill is a weapon platform with the capability of turning enemy vehicles into molten slag. With R24, get it into a good position early so it can spend the remainder of the game firing at choice targets. Think of this strike team as the first line of defense for your survey operation. Your Brokkrs will advance toward the enemy, securing equipment and objective markers, protected under a cover of fire laid down by your Steel Warriors. Make sure to use your model’s size to your advantage, to prevent or inhibit your opponent from drawing line of sight to your models. Your leader should focus on using his move and fight command dice to aid the Brokkrs when possible. The first shoot dice of each turn should almost always go to the Steel Warrior with an autocannon. The Steel Warrior with an autocannon should hold the AP ammo, allowing him the opportunity to deal a massive amount of damage if your opponent is foolish enough to cluster a group of their models in a single cube, or expose a key target. Even if he doesn’t, the suppression can often be the most valuable aspect of his attacks, especially if your opponent clusters his models. Remember your Huscarl also has a Hailstorm Rifle, granting him a greater range and AP1. This weapon’s Rapid Fire ability gives you the opportunity to try to pin a model if you really need the extra suppression. One advantage of having fewer models is that you can more regularly expect to have the initiative. Use this to your advantage for getting a first turn suppression down on important or dangerous models. This strike team is all about attrition. Your Forge Guard Huscarl is equipped with a Hailstorm Rifle, something your opponent won’t take for granted more than once. With a shoot value of 3+, 2 armor, 4+ survive, and Life Support, he should be quite intimidating. He is no slouch in melee either, with a 4+ fight and a Forge Hammer. This being said, he is not impervious to harm. Do not put him in the open if you can help it. Like the last list, your first Shoot action command dice should go to your rifle when you can help it. Since your opponent will almost always be outnumbering you, suppression is one of the best ways to minimize the damage they can inflict. The Forge Guard and Steel Warrior make up your gun line, able to put down a decent amount of fire themselves all at AP1. I can’t stress enough to hug terrain, and never give your opponent a clear shot if you can help it! Despite your armor and survivability, being too cavalier with cover will result in casualties! Be very careful choosing targets since you will be getting so few actions each turn. It may be worth rerolling activation, move and fight command dice, in the hopes of obtaining additional shoot or +1 dice results. This list will struggle against strike teams with a very large number of models, especially ones with high movement.

The Forge Father starter set and booster are available to pre-order, and Deadzone is available now.

How are you including these awesome space dwarves into your Deadzone games?

Author: Larry Vela
Dad, Gamer, Publisher, Pilot, Texan. All games all the time since junior-high. I started BoLS Interactive in 2006. I’m a lifelong tabletop & RPG gaming enthusiast, and internet publisher working to entertain and inform my readers every day. I've been playing RPGs and Tabletop Games since the 1970s. I'm been playing and covering Warhammer and Warhammer 40K for over 35 years.
Advertisement
Deadzone Mantic Tactics
Advertisement 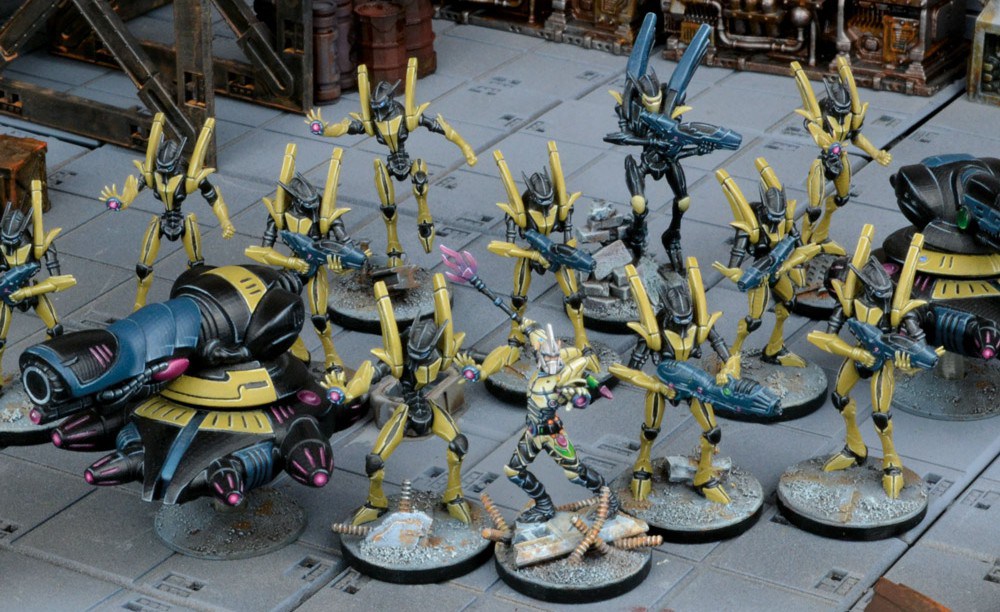