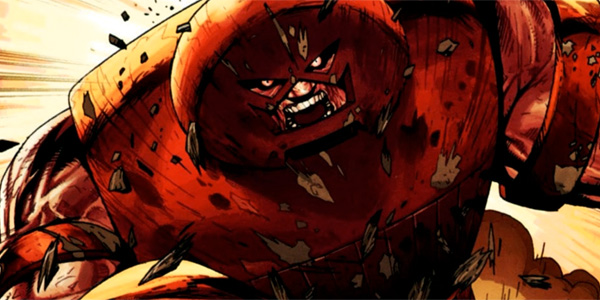 WizKids points you to a glimpse of 4 flavors of Juggernaut from the Uncanny X-Men expansion – just released!

Today we take a look at the 4 versions of the unstoppable man powered by the Crimson Gem of Cyttorak – Juggernaut from the just arrived HeroClix in the Marvel HeroClix: Uncanny X-Men series.   Take a look. 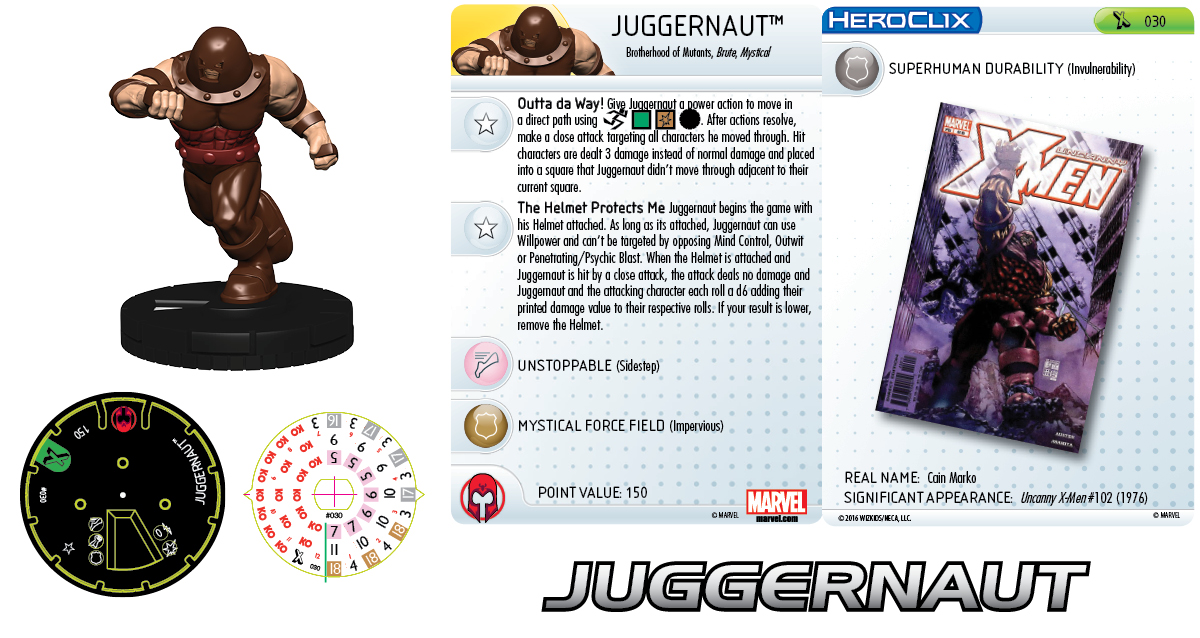 Here’s the basics on Juggernaut 030:

Dial wise, this is a very straightforward design – 7 clicks of life, and the only powers he has are a full dial of Sidestep, three clicks of Impervious, and 4 clicks of Invulnerability. Where he begins to get more finesse based is with his two traits. First is Outta Da Way!, which allows you to give Juggernaut a power action to move in any direction in a path using Improved Movement: Ignores Hindering Terrain, Ignores and Destroys Blocking Terrain, and Ignores Characters. After the actions resolve, you then make a close attack targeting all characters that he moved through. They are dealt 3 damage instead of normal damage, and are placed in a square adjacent to their current square that the Juggernaut didn’t move through. His second trait involves a removable object, and is called The Helmet Protects Me. This trait states that Juggernaut begins the game with his Helmet attached – and, as long as it’s attached, Juggernaut is able to use Willpower, and can’t be the target of Mind Control, Outwit, or Penetrating/Psychic Blast by an opposing character. 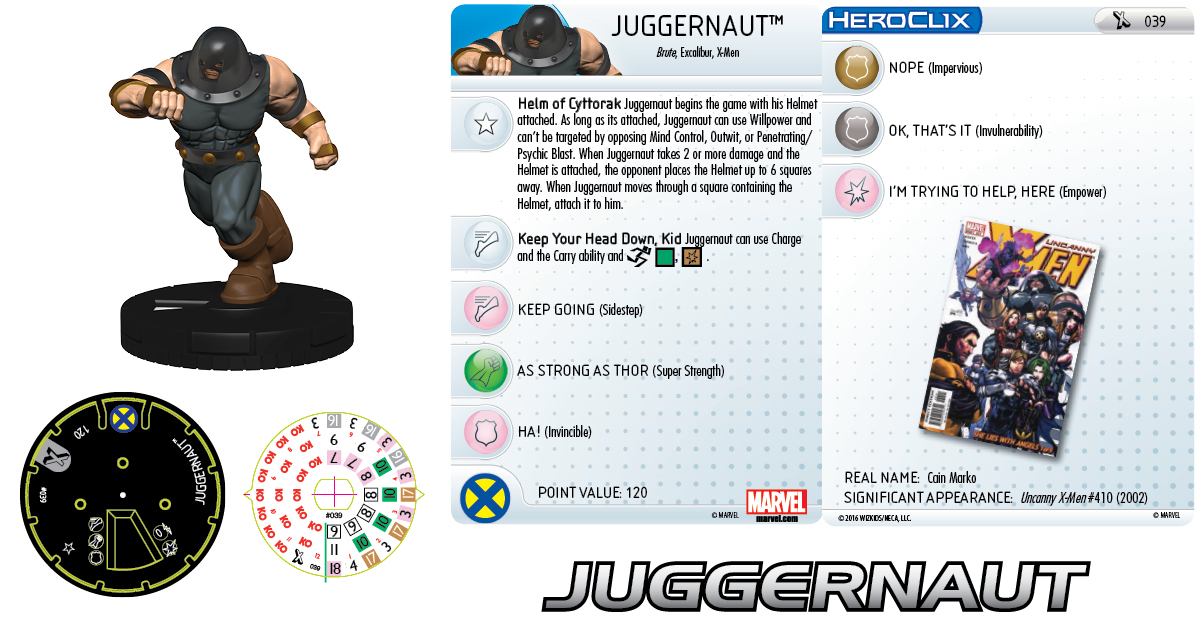 Here’s the basics on Juggernaut 039:

This version of Cain is firmly based upon his time with the X-Men and Excalibur, and reflects his more heroic side. His dial is more nuanced than the villainous uncommon version, and as such features a wider array of powers – Sidestep, Super Strength, Invincible, Impervious, Invulnerability, and Empower. He also has a special power on his first 4 clicks of movement called Keep Your Head Down, Kid, which states that Juggernaut can use Charge and the Carry ability, along with Improved Movement: Ignores Hindering Terrain and Ignores and Destroys Blocking Terrain. Much like his villainous version, he also brings a Helmet based trait called Helm of Cyttorak. This trait states that Juggernaut begins the game with his Helmet attached – and, as long as it’s attached, Juggernaut can use Willpower, and can’t be targeted by an opposing character’s Mind Control, Outwit, or Penetrating/Psychic Blast. 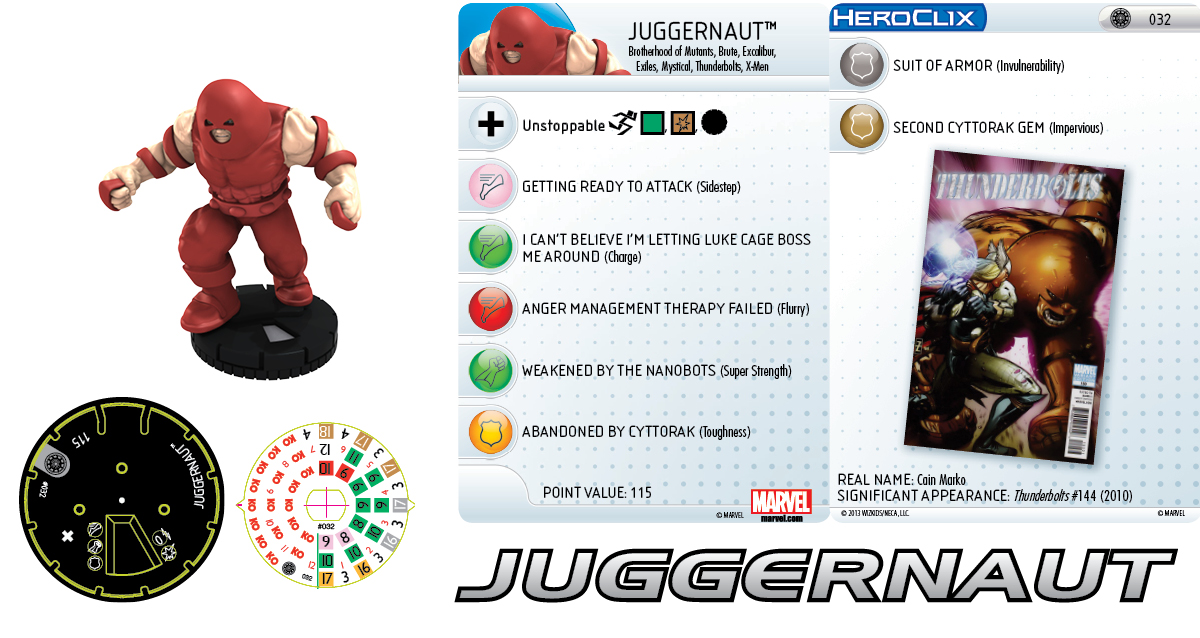 Here’s the basics on Juggernaut 032:

From the Marvel HeroClix: Invincible Iron Man set, featuring no special powers, aside from his Unstoppable ability, granting him Improved Movement: Ignores Hindering Terrain, Ignores and Destroys Blocking Terrain, and Ignores Characters. While he’s the least expensive of our Juggernaut choices listed today, that’s by no means a commentary on his usefulness. His dial is loaded with powers, including Sidestep, Charge, Flurry, Super Strength, Toughness, Invulnerability, and Impervious. 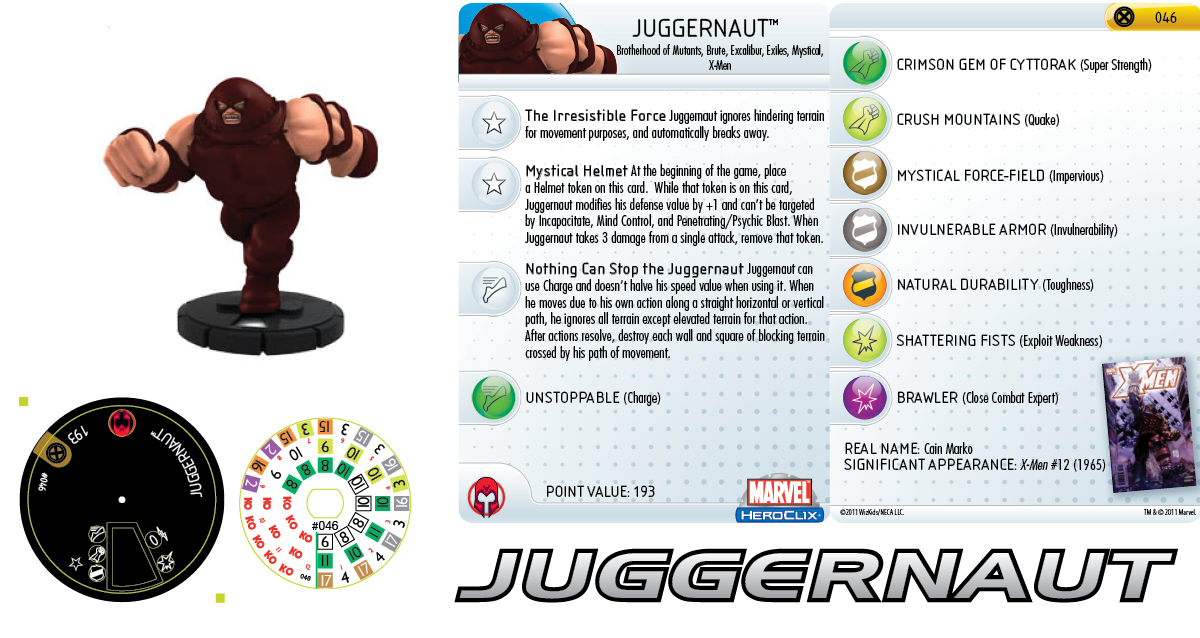 Here’s the basics on Juggernaut 046:

From Marvel HeroClix: Giant-Size X-Men, this version of the Juggernaut comes in with a phenomenal 9 clicks of life, is Indomitable, and still brings all kinds of pain to a map. To start, he has two traits, the first of which is called Mystical Helmet. This trait states that Juggernaut begins the game with a Helmet token on his card. While that token is on the card, his defense is modified by +1, and he can’t be targeted by Incapacitate, Mind Control, or Penetrating/Psychic Blast – however, if he takes 3 or more damage from a single attack, the token is removed. Next is his trait The Irresistible Force, which states that Juggernaut ignores hindering terrain for movement purposes, and automatically breaks away. From a powers perspective, this is our most diverse version of the Juggernaut, bringing Charge, Super Strength, Quake, Impervious, Invulnerability, Toughness, Exploit Weakness, and Close Combat Expert as standard powers. He also possesses one special power which appears on his first five clicks of movement called Nothing Can Stop the Juggernaut. This power states that Juggernaut can use Charge, and doesn’t halve his speed value when using it.

The Marvel Heroclix:Uncanny X-men is out now!

Have at it HEROCLIX fans.