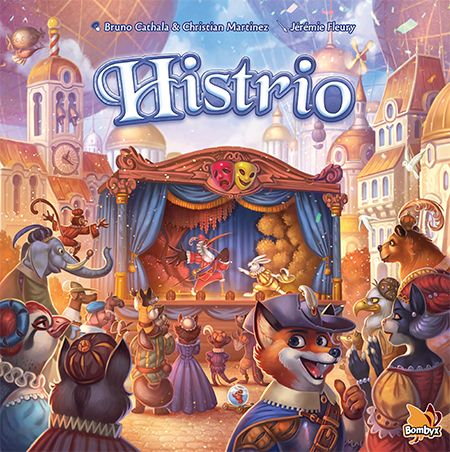 The Tabletop Spotlight is on Histrio – The game of Animal Theatre!

Our Friends at Dragon’s Lair Comics & Fantasy have a pretty wide selection of board games and this time they brought over a pretty unique one! Histrio is a strategy game of Animal Acting and it’s more of a challenge than you may think!

The game’s page has a slight different (I think more concise) description of the game:

Histrio is a strategic card game in which two to five players compete to put on the best theatrical performance. Over the course of two seasons, players recruit performers, send managers to influence the King’s mood, and carry out secret requests. At the end of each season, Ecus are given out to the players with the most successful shows, as it relates to the King’s mood. After the second season, the player with the most Ecus wins the game.

When we opened the box I remember feeling a little overwhelmed. I wasn’t entirely sure what was going on with this game. Is it a card game? Is it a board game? Why are there animals dressed in medieval garb? Whoa – that’s a cool 3D stage! That’s literally what went through my head in the first few moments of opening this box. Yes – I know I sound like I know what I’m doing when we go through the contents, but there is a reason you can only see my hands when I open these boxes: To hide the looks of confusion and surprise (and sometimes terror) of my face!

But back to the game – You’re basically the stage manager/owner/head-actor-in-charge of an acting troupe. Your goal is to tour the country side and recruit actors and other agents to your troupe. You’re gearing up to put on a play for the king and you need to make sure you’re ready to put on a great show. The catch is that you’ve got to guess what type of show the king wants to see. In classic style there are only two options: Tragedy or Comedy. 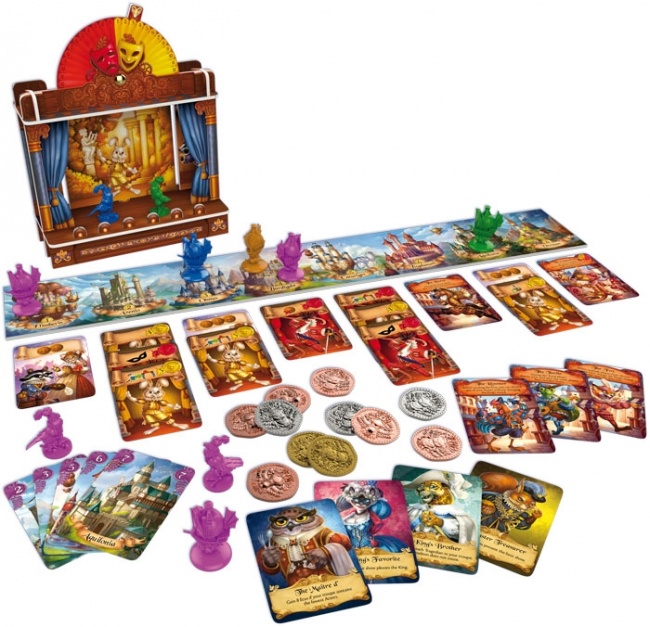 There are things that can influence the king’s mood and you can attempt to go for those modifiers – and thats where the real strategy comes into play. Do you want to go for the best actors of one type? Do you want to go for a more diverse cast of players? What will your opponents do? And there is a catch. The territories you go to are numbered. Each player selects from their respective decks which numbered territory they would like to recruit from. If all players go to a different territory, then it’s all good and you get the cards. However, if you go the SAME territory as another player, those cards are discarded and neither (or any if there are more than 2 of you) player gets the cards. There are different ways to play it and thats really where the game comes in.

Aside from the “easy to learn, but tricky to win” type gameplay the art and components of this game are really well done. It’s Anthropomorphic Animals in a cutesy style (like a modern version of Disney’s Robin Hood style). Plus the cars, tokens and plastic miniatures are all high quality (it is published by Asmodee after all). I really liked that 3D Stage as well – I thought that was a great touch and much different than just a generic dial or board game counter.

Overall, this is a game that is perfect for families with kids – and adults won’t get board with it either. It’s a cool theme, great mechanics, easy to pick-up gameplay and a great looking board game – what’s not to like?! Histrio is in stores now – go check it out! 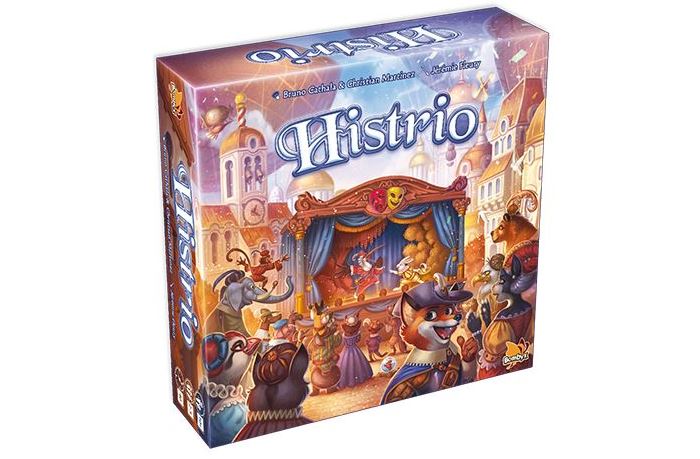 The Munificent Theatrical Festival takes place once a year and all the producers in the kingdom bring their most talented actors and most extravagant shows to impress the King at Court. Leading up to the festival, recruiters search far and wide for performers of the highest caliber, in order to put on the best show the kingdom has ever seen. However, it is not just the quality of the performance that matters, but also whether it satisfies the King’s ever-changing mood. There’s no way to tell who will come out on top until it’s time to take the stage, when only luck, influence and time will tell who earns the most acclaim… and the most gold.

Not knowing what the King will prefer at the end of each season presents you with a major question: do you play it safe and keep a balanced crew, or do you go all in on your ideal show and hope it’s loved by the King and the Court? Consider your options carefully as you travel the kingdom, recruit talented performers, and artfully scheme to put on the best show. If you fill the King’s heart, he may fill your wallet in return, and whoever has the most Ecus at the end of both seasons wins the game and the kingdom’s theatrical acclaim!

*Not an actual quote from William Shakespeare. 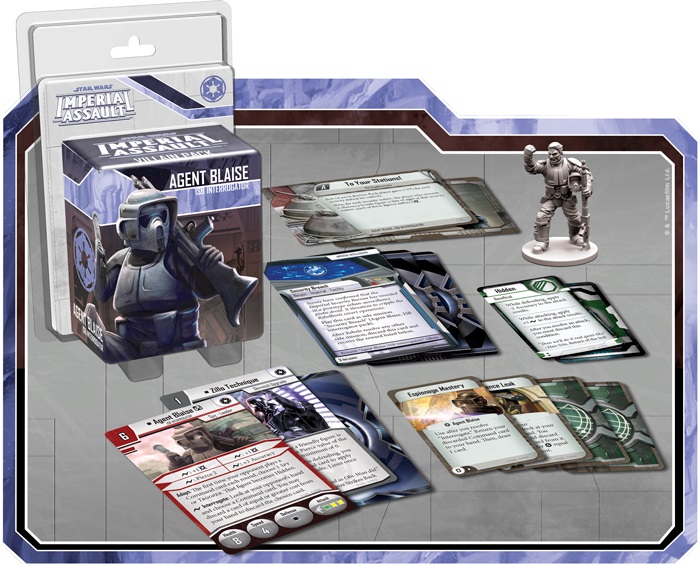