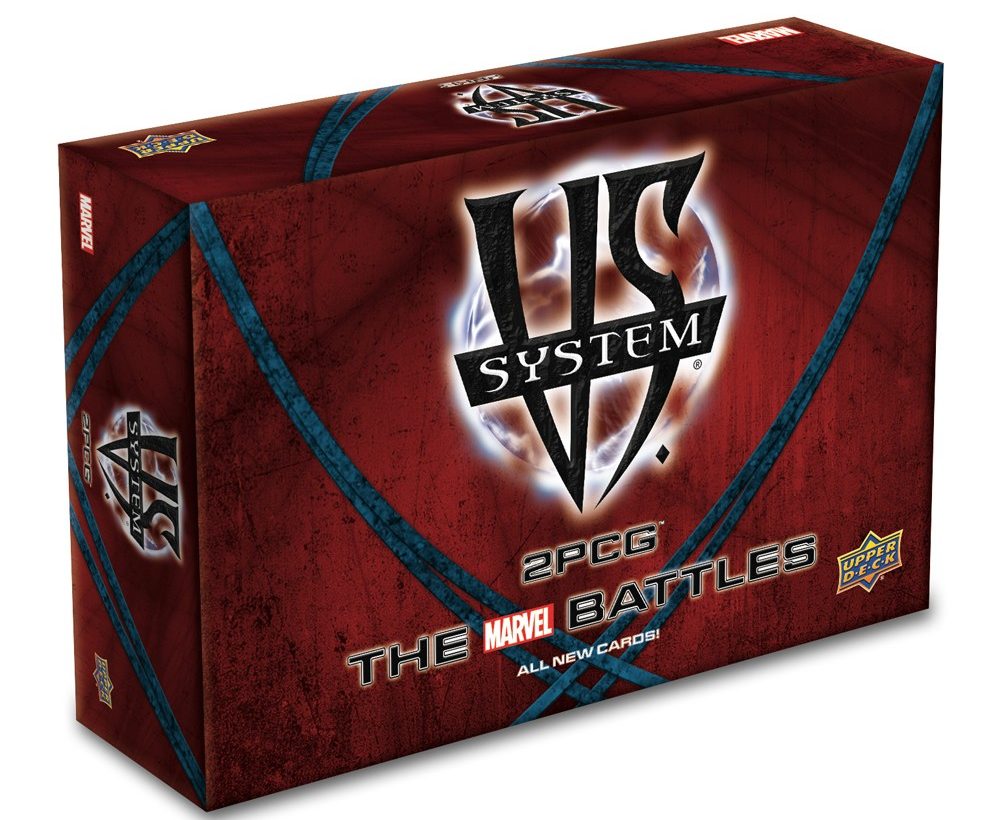 The Tabletop Spotlight is on the VS System & The Expansion Pack: A-Force!

Hey again BoLS Readers! If you’ve ever wandered into a Game Store/Comic Book Shop (like where our friends from Dragon’s Lair Comics & Fantasy are from) you’ve probably seen this game on a shelf. The VS System has been around for awhile but recently they did a revamp of the game along with some new Expansions. This is the latest VS System Starter Box and Expansion Pack “A-Force” from Upper Deck:

The VS System is a competitive card game in which players create decks (usually based around a theme of heroes/villians or super teams) and duke it out. It’s similar to Magic: The Gather but with differences mechanically. It’s this version also is based off all your favorite Marvel Comics Heroes as well. On top of that, it’s an LCG (or Living Card Game) which means when you buy the starter box and subsequent expansions you’re getting the same set of cards per pack – no randomness. That alone makes me sigh with relief.

The game play itself is super easy to pick-up on – even if you’re not a pro CCG player. Each deck starts with a main character and you’ll create a deck of 60 cards using other Characters, Plot Twists and locations. The object of the game is to KO the opposing player(s) Main Heroes. Plot Twists help your team or debuff you opponent’s team and Locations are like resources that help your team activate their super powers. Once you play a round or two it makes a lot of sense. 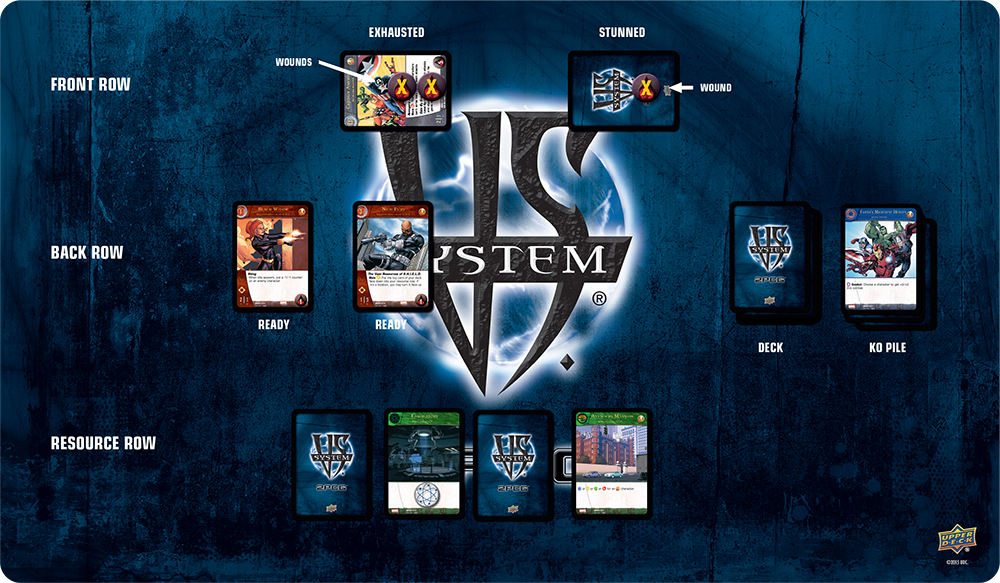 The cool thing about this game (besides the Marvel Art and Comic setting) is the freedom you have to build decks and themes. Most characters have a Team Affiliation and while that can seem restricting there are tons of characters per team. You can totally rebuild the Avengers, X-Men, Guardians of the Galaxy…well, you get the idea!

Upper Deck does a pretty good job of updating the game with new expansions as well. In the video we talk about A-Force which is one of the more recent expansions. The A-Force is themed around the Heroins and Villains in Marvel. From She-Hulk to Pheonix to Black Cat and more – there are tons of ladies in the pack ready to help you beat down your opponents! 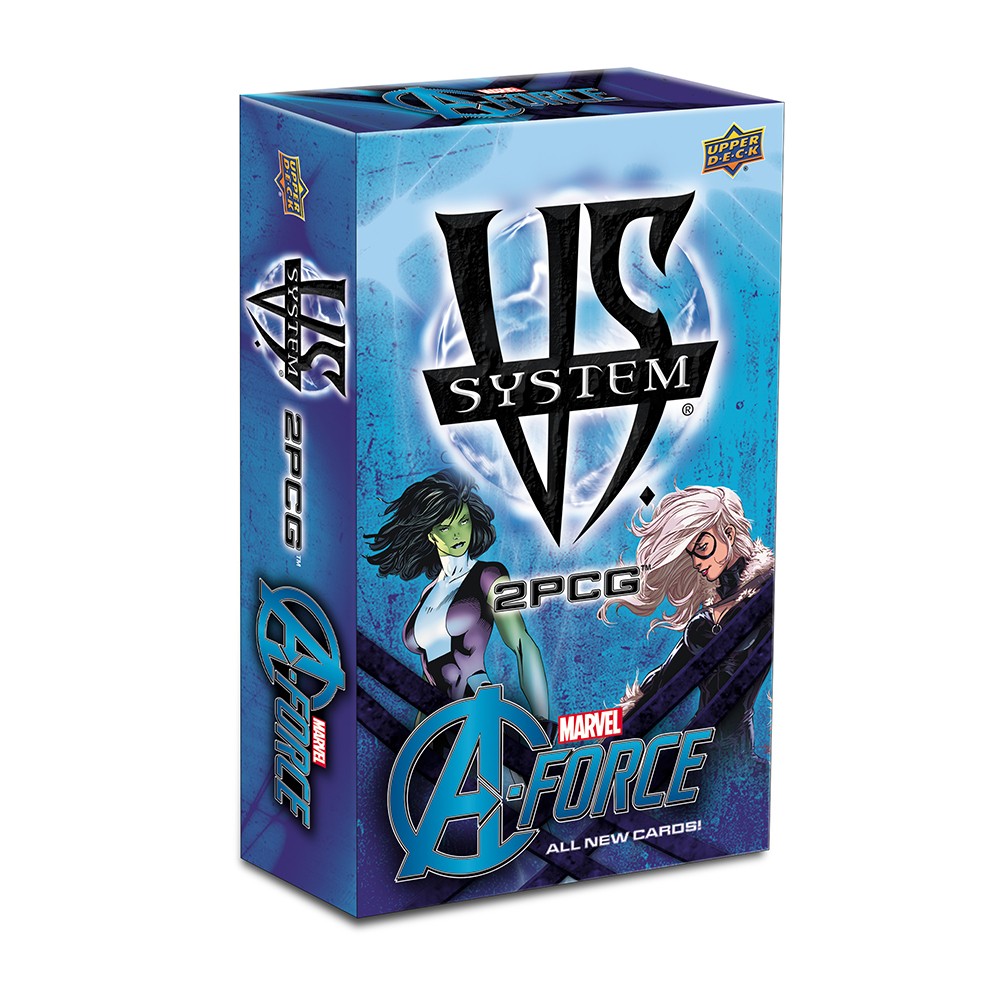 The price tag of $29.99 might seem steep for an expansion, but keep in mind that box has 200 cards in it! to break that down, if you were playing Magic, a booster can cost $3-5 and you get 15 cards in a pack. Even at the low end of $3 a pack thats only 10 packs or 150 cards. And those are random! You might be able to build a deck…or you might end up with a bunch of random cards that don’t really work together. I’m not knocking Magic: The Gathering as a card game – it’s been around for a LONG time and it’s a lot of fun to play. But for a casual game, I think the VS System is easier for the player to collect.

Anyways, if you’re looking for a fun, competitive card game with a Marvel theme you can’t go wrong with VS. So go check it out – it’s in stores now!

The Vs. System 2PCG™ is a card game where 2-4 players each build a deck of Characters, Plot Twists, and Locations, and try to knock out their opponents. Each Vs. System set comes with a full playset of cards so you’ll have everything you need to play the full game right out of the box. If you never played the original Vs. System, don’t worry: You’ll pick it up fast. And If you’ve played original Vs. you’ll find that some parts of the game have been streamlined or changed in order to make it easier to learn, faster to play, and more fun to battle.

Deadpool- I CHOOSE YOU!

Author: Adam Harrison
Writer, Editor, Texas Native, and Austinite for 15+ years, Adam covers all things Tabletop Gaming. Which includes Warhammer 40,000, Age of Sigmar, D&D, Board Games and everything else that involves dice, boards, cards and a table. A hobbyist, player, and collector of miniatures and games, Adam's current obsession are his Death Armies for Age of Sigmar, his Blood Angels and Tyranids for 40k, and his ever growing Arkham Horror: The Card Game Collection.
Advertisement
Card Games Comics LCGs Marvel-DC DO NOT USE Tabletop Spotlight Unboxing Videos
Advertisement