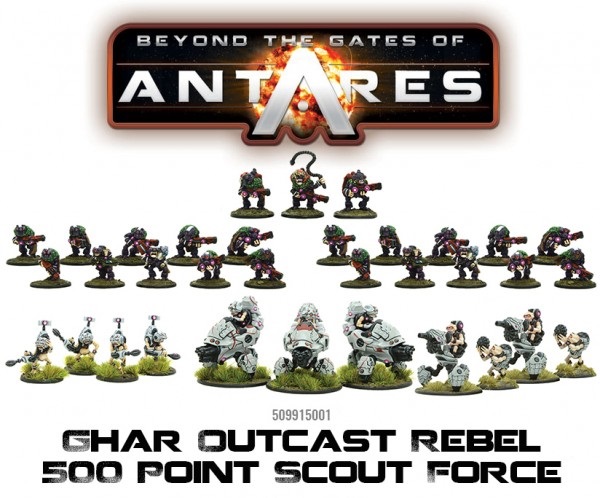 The Ghar Empire has a rebellion on their hands. Come see the perfect starter force for the Ghar Outcast Rebellion!

Lead by Fartok, the Ghar Outcast Rebel army is a rag-tag group of rebels with a wide variety of troops and equipment. They must rely on what they can salvage and liberate from the Ghar Empire.  The army list and more info about the rebels can be found in The Battle for Xilos, the new Antares Supplement. If you’d like to join these underdogs then Warlord has put together a 500 point starter army so you can dive right into the battle! The core of Fartok’s rebel army is the Black Guard comprising the most experienced and loyal of his ﬁghters. This is mostly made up of veterans of Fartok’s Battlegroup Nine, although as the rebellion has gathered pace the Black Guard has grown with the addition of many other seasoned warriors freed by the rebel army. The rebel army is itself growing so large that Fartok has divided his forces into several smaller commands, each under the eye of a trusted rebel leader. Representing the forces of the rebel Ghar leader Fartok this army is built around a core of freed slaves – outcasts – but their role is quite diﬀerent from that of outcasts in the Ghar Empire’s own armies. These ‘free’ outcast rebels are troops with a genuine ﬁghting role. They are relatively well equipped, often making use of weaponry captured from other human forces. Many are battle-hardened troops, competently led, and determined. Ghar Empire armies are armed by the armaments factories of their home world Gharon, but the rebels must rely on what they can capture, repair or fabricate using the modest resources available to them. This has resulted in a force with a wide variety of troops and equipment, at least compared to the relatively homogenous armies of the Ghar Empire. Most significantly, it means that a rebel army is fundamentally an army of ordinary outcast infantry supported by a lesser number of machines including refurbished battle armour and captured crawler vehicles, awesome conversion foder for those who can’t resist tinkering with your models!

Upgrade the 500 point scout force to a 750 point skirmish force by adding the superb Fartock model. Use him as a commander in battle armour, choose leader 3 option, add 2 battle suits, equip them all with plasma claws and get fighting! The Xilos Campaign is heating up – will you answer the call Beyond the Gates of Antares?