Gates of Antares: Meet The Battle for Xilos 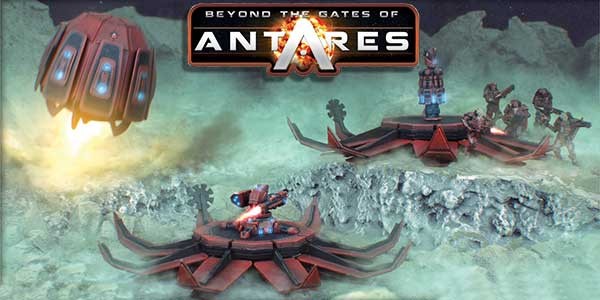 The Battle For Xilos is now available! Rick Priestly gives us a closer look at the new expansion.

The Battle for Xilos takes the form of six new narrative scenarios together with a new army list, new entries for many existing lists, and a whole bundle of additional rules for the Beyond the Gates of Antares game. The scenarios are presented in the form of a wargames campaign that allows players to fight out the events described: the discovery and occupation of Xilos by the Ghar, subsequent battles between the Ghar and Concord, Algoryn, Freeborn and Boromite forces, the arrival of an entire Ghar Outcast army and the fighting between the rival Ghar troops, and the appearance of a substantial Isorian task force at the very end of the campaign. The following forces all take part in the narrative.

This supplement is designed so that players can make use of the content in various ways, depending on how they wish to approach things, how much time they have to play, and how many players are participating.

You can play out the entire campaign of six battles using the forces described. If you do this you can also use the campaign results charts to determine what bonuses or discoveries are available to participants in subsequent games. The results of the sixth game will establish who has won overall as well as determining the fates of the participants and the future of the entire Antarean Nexus itself. You can also play out the entire campaign of six battles using any forces chosen to an appropriate points value as indicated for each game. You might also reduce the number of battles by just playing the ones that appeal to you. Players can still use the campaign results charts and run the games as part of a campaign if desired, but this isn’t necessary in order to play the games. High Commander Karg – Leader of the occupation forces of the Ghar. In Shops 2nd July.

You can play any of the six individual scenarios in this book using any forces you wish in the same way as the narrative scenarios already included in the Antares rulebook. Individual scenarios can be played over and over again, with diﬀerent forces every time if you want. Notes are included suggesting further variations to try out. Each scenario introduces a diﬀerent game play innovation that can be carried over into further games very easily.

This book contains one entirely new army list in the form of Ghar Outcast Rebels, and additions for other army lists that either extend existing entries or add new ones. Although introduced here for the ﬁrst time, these new entries form part of the relevant army lists and can be used in any Antares games.

This book includes rules for several new Antarean characters and – in the case of Fartok – updated rules representing the Outcast High Commander as he stands at the time of the Xilos campaign. These characters can be used in any games on the same basis as other Antarean characters.

This book introduces various items of new weaponry, equipment and a selection of new rules. These are used in the scenarios described, but some have a broader application, notably the Ghar Outcast ‘hybrid’ weapon teams. Various new rules are covered, including those for combining troops from diﬀerent lists by incorporating allies – a signiﬁcant feature of the ﬁghting on Xilos that can also be applied generally if players wish to do so.

The Battle for Xilos online campaign launches on Saturday 18th June. The campaign is strongly linked with the new Battle for Xilos supplement for Gates of Antares. It follows the same story described in the supplement (that originally started in the main rulebook) and the outcome of the campaign will become official history in the game background – so this really is your chance to make your mark on the Antares universe! The cmapaign consists of 6 episodes that tell the story of the events, play battles and log the results on the campaign website.

Are you picking up this expansion?