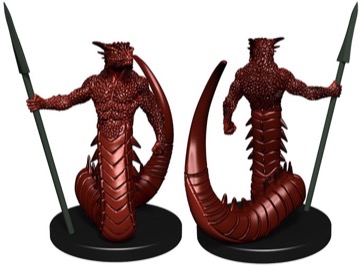 Paizo is showing off some new minis from the Deadly Foes set of prepainted plastic Pathfinder Battles minis!

… friends and foes from the world of Golarion, Deadly Foes introduces 52 unique figures for your Pathfinder Battles miniatures campaign. Deadly Foes follows the lead of popular Pathfinder Battles sets like Dungeons Deep to provide a legion of high-utility monsters and heroes suitable for any fantasy roleplaying campaign. From fearsome hobgoblins to evil soldiers, slavers, and monstrous giants to rare “dungeon dressing” inserts that add realism and fun to your fantasy gaming, Deadly Foes is packed the adversaries your game is looking for.

Up first is the Salamander, everyone’s favorite snake-bodied denizen of the Plane of Fire. The Salamander has a cool spear and stands ready to scorch your player characters into ashes. The Medium figure is slated at the common rarity. 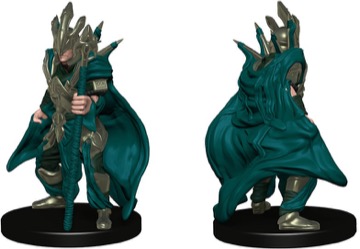 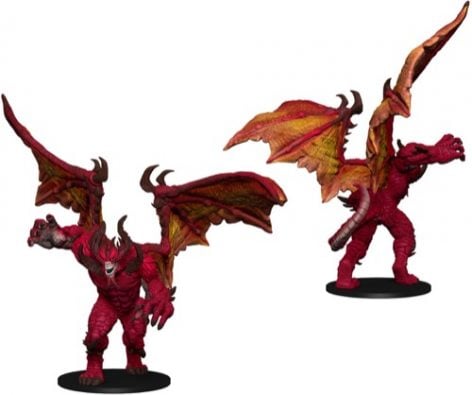 At long last I’m pleased to reveal the Pit Devil, a paragon of law and evil that serves as a fitting end-boss to any fantasy campaign. Or, you know, throw him at your third-level heroes and see what happens, just for fun. The Pit Devil is a Large, rare figure. 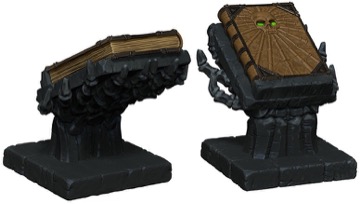 The is the first piece of “dungeon dressing” in the Deadly Foes set, the Book of the Damned itself! Like all of the other dungeon dressing in the set, this guy comes one per case, and is randomly swapped out for another mini in a randomly selected booster. Now, just like the impulsive rogue in my Monday night Pathfinder game, your player characters can have their very own copy of the most evil book in the Pathfinder world. Fun for everyone! Even more fun: The book can be removed from its base, giving you two minis in one.