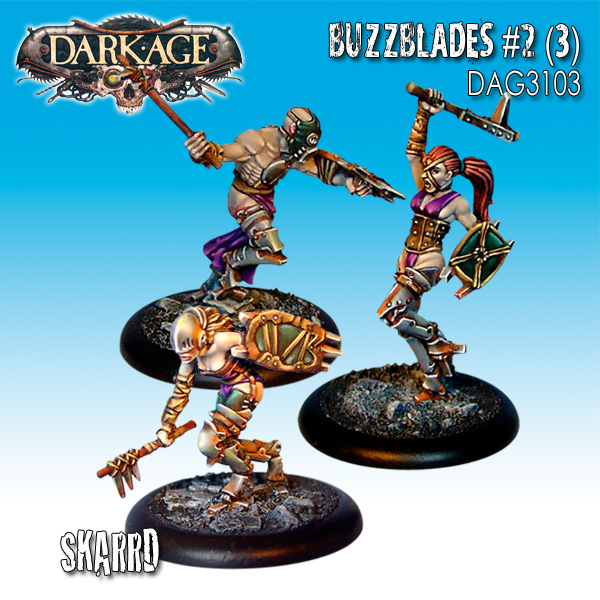 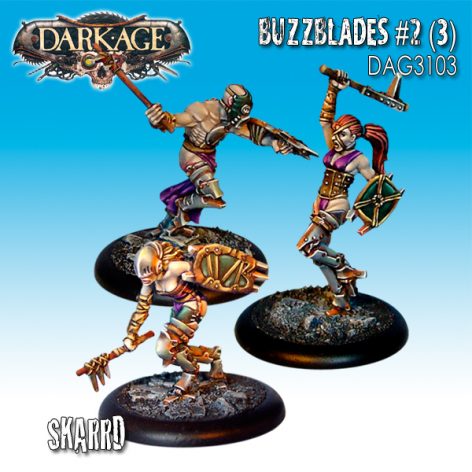 I’m back to look at another faction for Dark Age. This time it’s the Skarrd.

If you haven’t read my faction article on the Forsaken already, now might be a good time. The history of these factions are linked. The story of the Skarrd began when Forsaken society underwent the religious transformation that now defines it. With faith gripping the people’s hearts many began persecuting their neighbors for sins real and imagined. All the strict new rules weren’t going to work out for everyone. Many of the citizens of Port City found themselves aligned against the new regime. Calling themselves the Baniss, they chose to strike out across the Northern Wastes in the hopes of starting a new settlement in one of the many pre-collapse installations that dotted the land. The journey was harder than they could have imagined. Of the hundreds that set out across the desert, only half were strong enough to survive the trek to what they dubbed “Fort Retribution.”

Of course it wasn’t actually a fort. The compound had originally belonged to the Powergenics corporation. Its purpose was to test various drugs, stimulants, and even retroviruses to be used for physical and mental human enhancement. These had been left behind when the facility was abandoned. The containers that stored them were pried open by the starving survivors. Many died outright. Those that lived changed. Some found themselves stronger – others faster. Some grew to a massive size. Only one change united them. They were gripped by a rage that they could barely suppress. In the end, the Baniss chose to stay rather than risk another trek through the wastes. There had been encouraging finds of preserved food and water in the facility. Maybe they had already suffered through the worst of it. 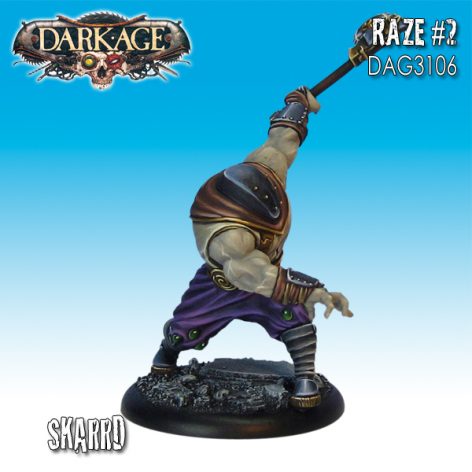 Over time, many of their mutations stabilized but there were more surprises in store. Perhaps one in a hundred Baniss are born nearly perfect with physical and mental abilities that surpass any of their peers. These Tribal Fathers as they are called have the ability to control the emotions of others. Uncharacteristically calm for their people, their mental powers help focus the inherent savagery of the others of their kind. They can also unleash these powers on their enemies with devastating effect. Another consequence of Fort Retribution’s chemicals was a drastic increase in Baniss fertility coupled with decreases in gestation time. The Baniss quickly regained their lost numbers. Focusing their rage on the Forsaken, they adopted a nomadic lifestyle, raiding their hated enemy for vengeance and supplies whenever possible and hunting hostile wasteland creatures when not. 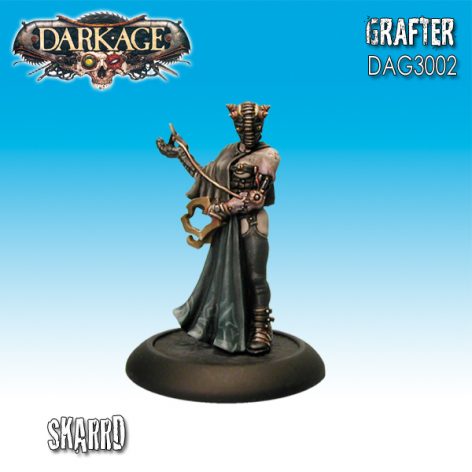 What truly turned the Baniss into a power on Samaria was their encounter with another of the Forsaken’s enemies. This stranger and his ragged band of followers might have been treated like any other party lost in the wasteland – but for the strange creatures in their party. Nonetheless, this trespass couldn’t go unanswered. Father Retribution led all the tribes he could gather to intercept the group, sending his strongest champion to challenge their leader. The stanger slew him in seconds. The Baniss were facing none other than Saint Johann, on the run from the Forsaken for the crime of human grafting. He was more than happy to share the secrets of this forbidden science with those who would give him shelter. With this allegiance, the Skarrd were formed. The many willing subjects among the Skarrd have helped Johann perfect his art. His masterpieces are the mighty Abominations that tower over normal men. 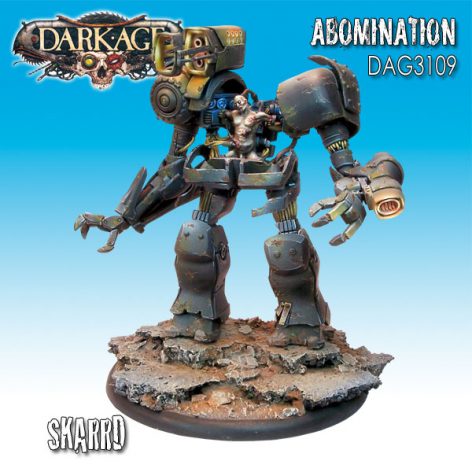 Skarrd playstyle is a bit more eclectic than some of the other Dark Age factions. They have lots of powerful individual models that can be supported by cheaper troops. Faster models like Harpies or Charity’s Zeal can range ahead and try to pin down their enemies in time for slower pieces like Raze, Warheads, and Abominations to pound them into pulp. Of course they do have some elite squadlinking models as well, like the Drillheads and Golabs.

For a bunch of enraged lunatics, Skarrd can also play a pretty mean ranged game. All Abominations pack decent ranged weapons. Additionally the more numerous Bolas can make up for their weapons’ mediocre stats by sheer volume of fire. Additionally their attacks entangle models, stealing their AP allowing you to clean them up with the rest of your force. 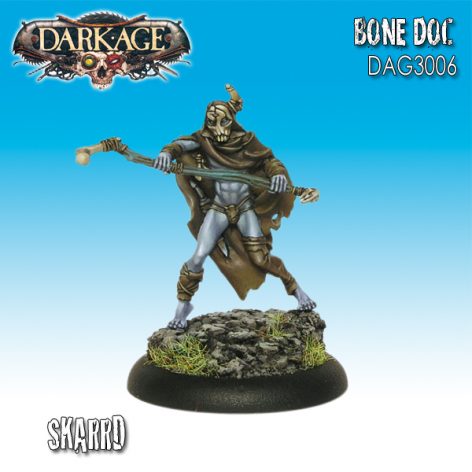 Skarrd also have a few models with Psychogenics , giving the faction access to a helpful array of buffs, debuffs and a bit of extra direct damage. Psychogenics are also chosen after deployment meaning you can tailor them to your opponent. Overall, Skarrd can be played a lot of ways – and we haven’t even gotten to the cults yet. Remember you can download all the Dark Age cards for free. Here’s a link to the Skarrd cards, and another to their faction document which contains their psychogenics.

As the Skarrd have grown and multiplied, different factions have grown amongst their ranks. There are many of these so-called “cults.” Most, like the lesser known cults of Rot or Madness, are nothing more than an individual morbid obsession that has grown unchecked throughout a tribe. Others are powers to be reckoned with. 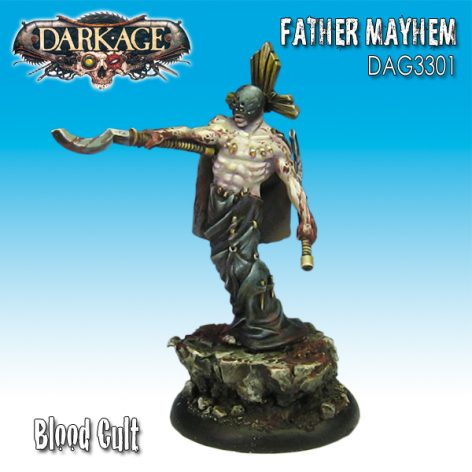 The Cult of Blood was surely an inevitability among this warped people and perhaps this goes to explain its prominence amongst the Skarrd. Blood Cult are all about – you guessed it – blood. When you play Blood Cult, you place Blood Tokens beside living models that are killed. These give a cumulative bonus to any Blood Cult models nearby. Unsurprisingly the Bleed weapon ability is in play a lot, and a few Blood Cult have the Blood Pathogens ability which can make Bleed checks harder to pass. This makes the Blood Cult especially nasty against Living models with a high armor value since wounds from Bleed have nothing to do with armor. Since many Blood Cult models are pretty fragile, they bring along wretched things called Puppets whose only function is to take hits for them. 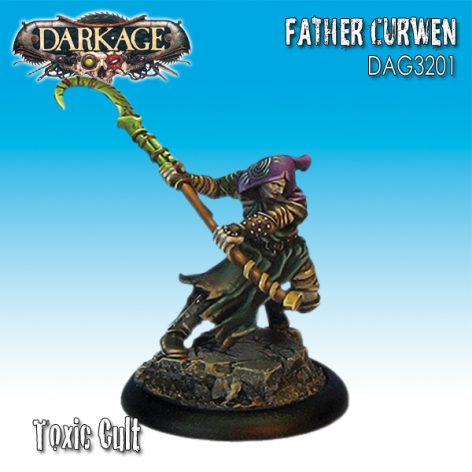 The Toxic Cult has grown from the survivors of some of the deadliest areas in Fort Retribution. These individuals and their offspring now find themselves with an immunity to nearly any poison imaginable. Naturally they have made poison their signature weapon. Just about every weapon to be found among the Toxic Cult can put a poison counter on its target. While these don’t have the best odds of damaging the sheer volume of them that the toxic cult can put into play will nearly guarantee their opponents will be succumbing to some of them. Additionally they have access to some stranger toxins with potentially nastier effects. Father Curwen’s Frantic Toxin will send enemies running  and can even cause them to attack one another. Hoodoo’s Fear Toxin gives a model a Panic Counter which can’t be removed. 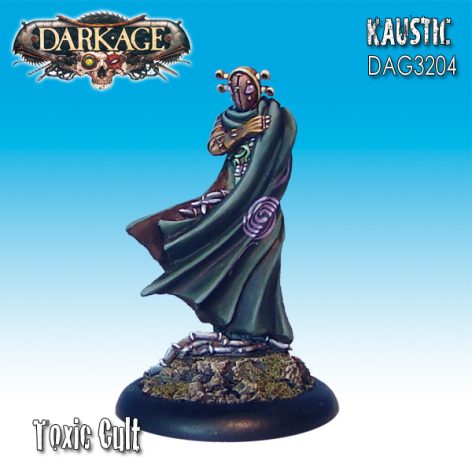 Still, I think one of the best things Toxic Cult has going for it are the Caustics. That’s because these guys make smoke clouds. They have all the great defensive uses you usually get out of smoke, plus these special Toxic Clouds will put a poison counter on anyone who goes inside them that isn’t part of the toxic cult. 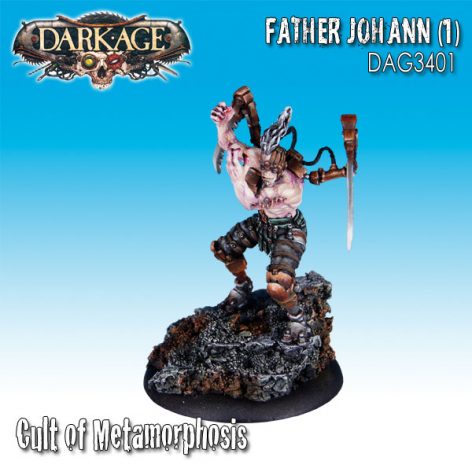 Last up we have the Cult of Metamorphosis, Johann’s own power base among the Skarrd. Envious of the psychogenic abilities of his new allies, Johann set his best scientists to finding a way to replicate these powers within himself. They succeeded more quickly than he could have dreamed. Further experimentation has also improved his physical grafts making Father Johann an utter beast; easily a match for any of the mounted Saints in close combat. Of course he is also a Psychogenic Master, which more than makes up for his lack of ranged attacks.Time has changed his trusted lieutenants as well. Quietus, Dominique, and Dexus can be taken as Skarrd models in the Cult of Metamorphosis but with slightly different rules. 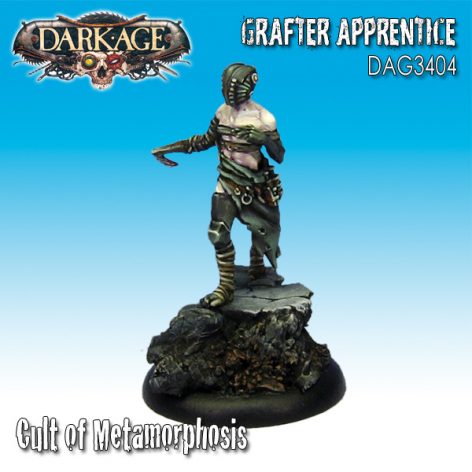 Father Johann’s own cult is obsessed with grafting. Including Dexus in your force will allow you to take an extra Grafter. An Apprentice Grafter may join the force as well. All the Superior Maintenance counters you could ever want! The cult of Metamorphosis also has the ability to reduce your opponent’s MAL values causing their weapons to blow up in their faces more frequently. Cult of Metamorphosis Psychogenics also revolve around Malfunctions making them worse for your opponent, or better for you. 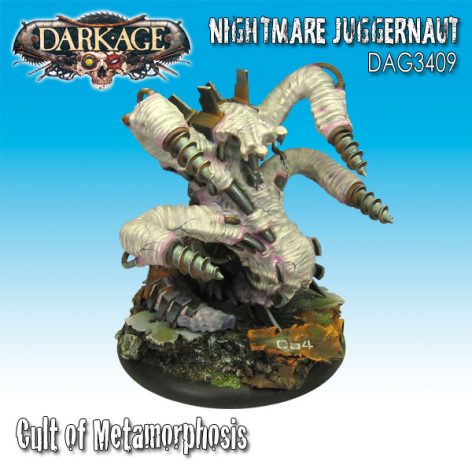 If you’re into big disgusting monsters, Metamorphosis can take more of those than any other faction. Dexus’ latest experiments into Baniss and Drilhead tissue have yielded the horrifying and Disgusting Juggernaut and Nightmare Juggernaut. These can be fielded alongside a standard Skarrd Abomination giving you three enormous models in a 750 point game.

~Hope you enjoyed the article. Next I’ll be doing Brood. In the meantime don’t forget that Dark Age is running a Facebook contest. Like their page to win a miniature painted by their studio team. If you want to chat with the Dark Age community, you can ask to join Samaria Reborn, an active Dark Age Facebook Group.