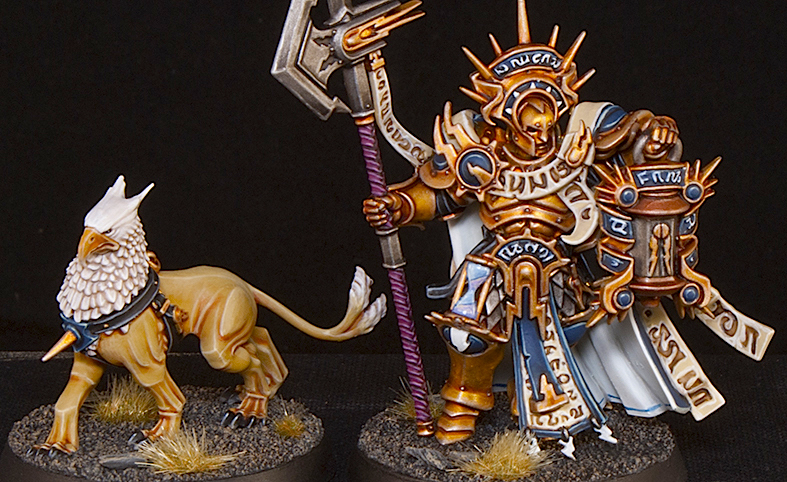 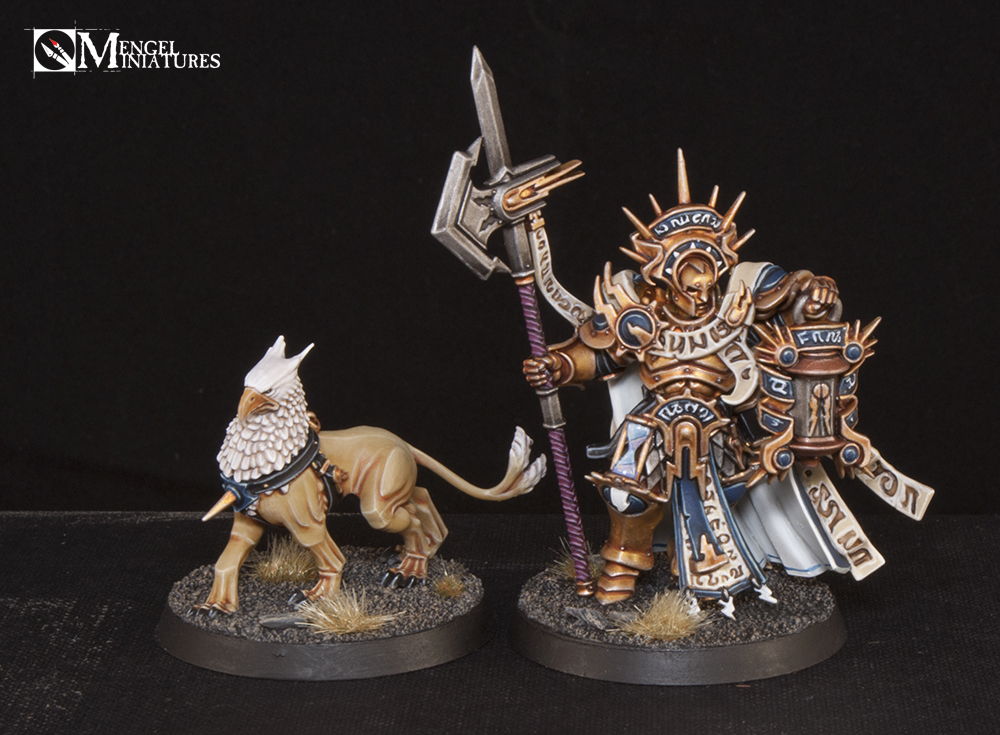 I have been working on my Stormcast Eternals for awhile, but until recently they had been leaderless. No More!

I had several of the heroes built, but picked the Lord-Castellant as the first to paint to lead my warriors to victory. 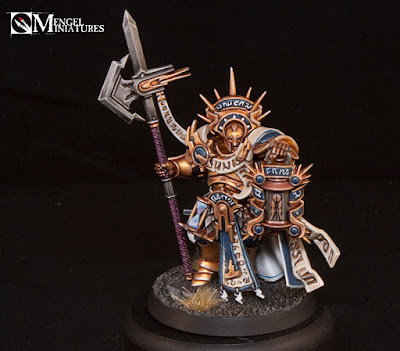 This model was a little strange to paint. These new plastic characters are great with the amount of detail they have, but the way they go together can make it a little difficult to plan out how to paint them. On past metal or resin models the cape would have been attached to the back of his body and legs, with no gap between them. On the Lord-Castellant there is a gap, which is a lot more realistic, but presents it’s own challenges. 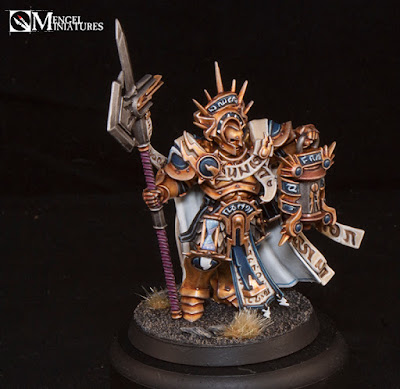 I pinned the model to a spare wine cork instead of gluing him to his base so I could get the paint brush up behind his legs. Normally the first color I would paint would be the more prominent one, in this case gold. I knew painting the cape behind his legs was going to be messy though, so that meant the inside of the cape had to be done first. The white was painted Ulthuan Grey and then shaded by mixing in Dawnstone Grey and highlighted by mixing in white. I made sure to leave the main bulk of the cape a slight off white so that I could do my final highlights with pure white. I also took this opportunity to paint a design along the edges, just a simple line with lightning bolt motifs in the corners, but it helps break up the surface a bit. 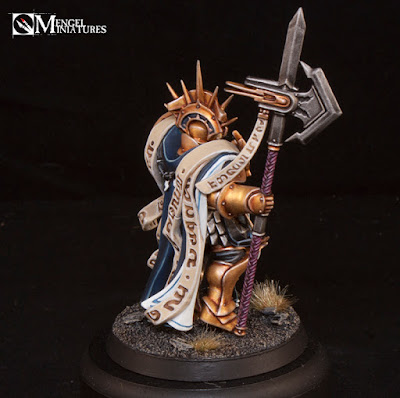 The whole flow of how I painted this model was very different from what I normally do. I moved onto the gold next, which I painted in the same manner as this tutorial here. After the gold was done I pretty much just painted everything else that would be hard to reach once he was glued on to his base, like the tabard. I wanted to get all of this out of the way so that I could attach him to the base like normal. Usually I would paint all of one color at the same time, but this model also made that difficult. For example I didn’t paint the cloak at the same time as the rest of the blue. This slowed things down a bit, but not by much. 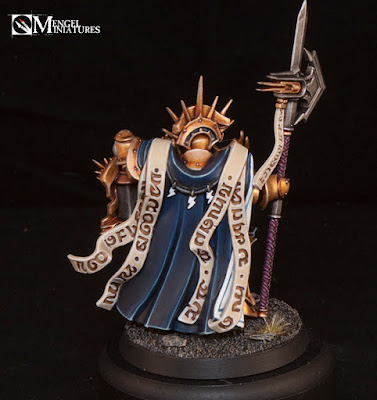 The silver on the ax was fun to paint. I wanted to give the flat surface a bit more definition so I painted on the reflections. It’s something you often see in non-metallic metal paint jobs, but I always prefer using real metals and find it a fun challenge to try and replicate the same technique. For the rest of the colors I used a of the same techniques I used on my Liberators and Retributors. The hourglass was one of the parts I was looking forward to painting the most and it was interesting trying to find out the best ways to get the effect I was going for. 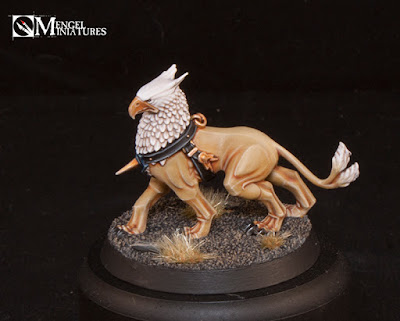 I had actually painted the Gryph-Hound first, using it as a break from working on my Tomb Kings. I knew from the get go that I wanted to paint the body to look like a lion’s. It was something I hadn’t seen yet, but seemed so obvious. I won’t go into to much detail about how it was painted because I will have a step by step tutorial this Wednesday. 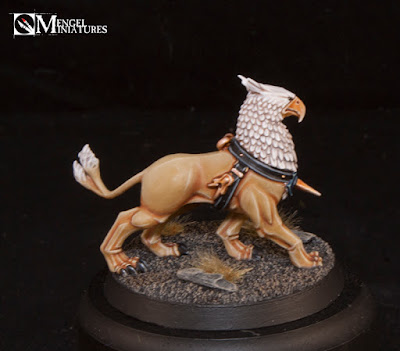 The head was a whole other story though. I didn’t really know how I wanted to paint it and went back and forth between something on the browner side and what I ultimately picked, a bald eagle’s head. It is unintentionally super American and it kind of makes me want to give him the affectionate nickname ‘Merica! Yes, the apostrophe and exclamation mark are part of that name, not just for emphasis. 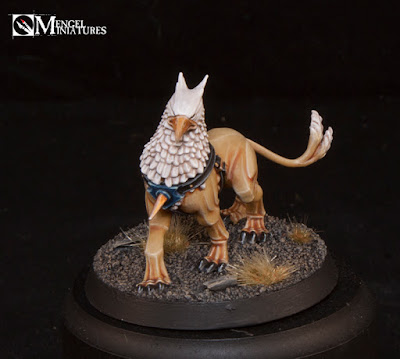 I think I will go for something a little more dramatic and fitting to the Mortal Realms though once I actually get around to naming him and the Lord-Castellant. I am really happy with how the pair turned out and it’s gotten me excited to paint more Stormcast. I think I might tackle my Prosecutors next so I can fill out my rank and file a bit before doing another hero. Next on the hero side of things I may bite the bullet and tackle the man himself, Orros Firestorm, my Celestant on Dracoth.

Be sure to vote for him on Cool Mini or Not here. 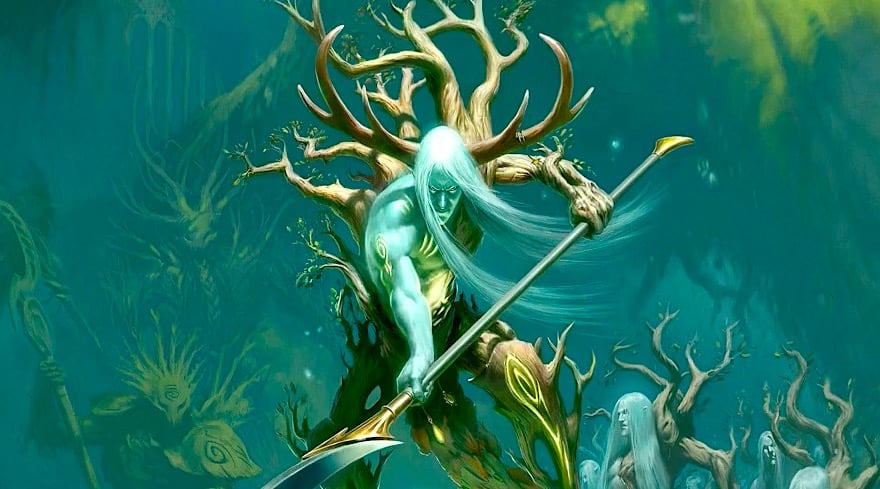