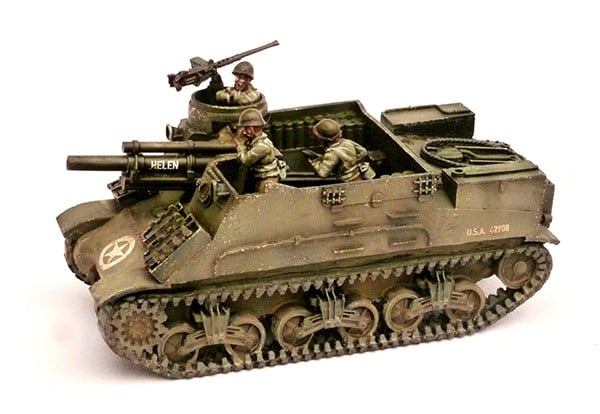 Two tanks got head to head – which one is more effective?

Andy Singleton of VolleyFire Painting gives us a compare/contrast of these two effective tanks from opposing forces. They’re similar on the surface, but they offer some varied advangtages. Take a look…

As the war in Europe and Africa expanded and military observers in the United States keenly followed the development of armoured warfare and tactics, and began to apply the lessons learned to their own forces. One thing that readily became apparent was the need for armoured artillery support to operate closely with armoured formations as they attempted to force a breakthrough in enemy lines. Initial stop gap measures utilising halftracks were the first vehicles to be adopted, however in 1942 a design mating the 105mm howitzer with the M4 Sherman hull entered service, and this vehicle was the M7 Howitzer Motor Carriage, or Priest as it was known in British service (Due to the pulpit like mounting for the .50 machine gun). Thinly armoured and with an open top, the M7 featured a large working area for the crew to serve the main armament, with the 105mm howitzer being capable of ranges of over 12,000 yards, and as with most American howitzers had a very capable and noteworthy explosive round.

First seeing action with the British 8th army at El Alamein the M7 was well liked and a very capable machine, and swiftly became the most prevalent type of self-propelled artillery in US service, with each armoured division having 3 battalions of M7’s by the end of the war.

The M7 was used all over the world by US and to a lesser extent commonwealth forces, and was used as in assault gun roles in the far east as well as a traditional artillery piece, a role the vehicle also fulfilled in Italy, where the high elevation of its main armament meant that it was able to provide accurate direct fire at enemy positions on high elevations such as those on hill and mountain tops. Although replaced in British service by the Sexton for logistical purposes, the M7 served with US forces into the early 60’s, and was also supplied to Nato militaries in the 1950’s, and served with the Israeli military during the Yom Kippur War in 1973. This long service has led to the M7 being a relatively common vehicle at museums and can even be seen in private hands as well.

The M7 in Bolt Action is an armour 8+ opened topped vehicle armed with a medium howitzer and a heavy machine gun, weighing in at 160 points for regular, and coming as either inexperienced, regular or veteran flavours. Two things immediately jump out with the M7, its vulnerability and its extreme range. Being open topped, the M7 can receive pins from small arms, meaning that even enemy infantry can swiftly shut down your fire support, especially if you are using it as inexperienced. The second issue with being open topped is that indirect shots that hit the M7 have a better chance to penetrate the armour and knock your vehicle out, however you do have the mobility to relocate and fire if you start coming under fire.

Fortunately, you have the range to stay back and standoff whilst still reigning fire on the enemy. Unfortunately the M7 does not have access to an observer so still requires line of site, however with a 60” range for the medium howitzer and 36” for the heavy machine gun this shouldn’t present too much of a problem. The medium howitzer can be fired indirectly too, so you can use that to target enemies who may be too well obscured by cover and range, or are covering an objective. Causing 2D6 hits with +3 pen regardless of range, and doing D3 pins makes the medium howitzer a very flexible weapon, as you can get pins on all vehicles, and can even damage medium tanks with the shot.
Use the machine gun to help screen your infantry’s advance, and your M7 can become a very effective firebase, all be it a fairly fragile one that you will need to look after.

The SdKfz 124 Wespe was developed as a means to provide panzer divisions with their own integral artillery support (along with its larger cousin the Hummel), and was created using the obsolete Panzer II hull along with the standard 105mm howitzer of the German army, in an open casemate at the rear of the hull superstructure.

Entering service in early 1943, the Wespe fought its first battle at Kursk, where it very quickly proved its worth through reliability and effectiveness. The Wespe proved so effective in fact that all other production of vehicles based on the Panzer II hull was cancelled, and redirected to Wespe production. Production ran until late 1944, when the factories were over run, though the vehicle remained in service until 1945, though does not appear to have seen any post war service.

The majority of vehicles served on the Eastern front, however they also fought in the western and Italian theatres, though entered service too late to see service in Tunisia or Africa, and were assigned to the first battalion of artillery regiments of the Panzer divisions of all branches of the German military.

The Wespe in Bolt Action

In Bolt Action the Wespe is cheap and cheerful, coming in inexperienced, regular and veteran levels, and costing 145 points at Regular. For this you get a medium howitzer on an armour 7+ hull, with a medium machine gun. The Howitzer is fixed forwards, however the machine gun has a 360 degree ark of fire.
All the tactics for the M7 apply to the Wespe as well, however you have to choose between firing the MMG and the howitzer… The Wespe is significantly more vulnerable than the M7. Being only armour 7+ means that most incoming fire has a very good chance of damaging you, and although small arms still can’t penetrate from the side or rear due to not being heavy weapons themselves, they can still inflict pins as the Wespe is also open topped. Keep back and open fire from a good vantage point, but be ready to re-position.

To sum up, both these vehicles are a fairly low points option to give yourself some effective, mobile fire power, however both are lightly armoured and quite vulnerable to incoming fire, though they can be made to synergise with the rest of your force and be a supremely useful tool in the force.

Think these tanks would be an ideal addition to your Bolt Action collection? They’re just a click away!