Chaos VS. The Fang: Will the Wolves be Corroded? 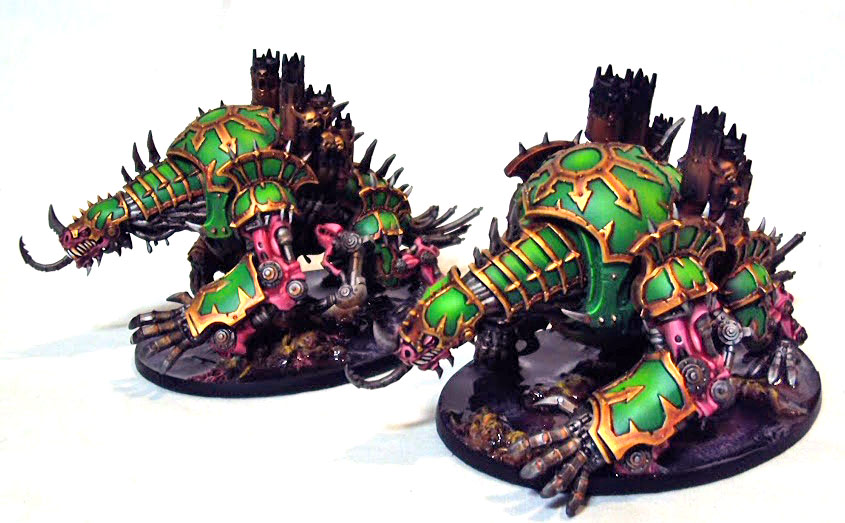 Yo Dawg, if you didn’t know, I walked up the mountain to find a new Ancient Master and while I was there, I was able to go to the bottom of the mountain, to Colorado Springs and play a game in the dopest beats lab of all time at Mike Haspil’s place. If you want the complete list break down, with a full breakdown of your tactics and strategies check out the video.

If you just want the rundown of what happens keep reading. Again, these videos’ are chalk full of information and we highly encourage everyone to watch it.

Mike: In turn 1, the wolves rush forward; I was going for first blood with the mauler fiend and the result caught me off guard.

Kenny: You divided your dice up, trying to go for two living storms and I was able to block the ignore cover one. I had night attacker so I was up to a  3+ in ruins. This was a critical point in the game already.

M: By the end of Turn one my thunder wolves run and use fleet and move practically into your deployment zone.

M: Another thing that caught me off guard is that the mauler fiends ignore terrain and it gets right up in front of a Rhino.

K: They have a lot of rules and they’re one of my favorite units. I know I’m going to get first blood because I have lots of little units like Rhino’s I can crush but I need to get my powers: endurance, which I always cast first so I can get 4+ Feel No Pain, and then sanctuary for the invulernable save;  without those powers the wolves would have eaten my death star.

M:  I definitely got hurt turn 1 losing both a rune priest and a rhino. At this point I need to kill a mauler fiend period.

K: You have a lot of strength 8 shots and then your living storm goes off with a ton of 6’s and unleashes 17 hits. Then you get 15 three’s which was exactly what you needed to evaporate my entire unit of spawns. That’s 15, toughness 6 wounds; I got caught slipping without cover and it really hurt me. Then combination of melta, missiles, and plasma then destory’s my mauler fiend. The loss of all my units on the left side is huge. 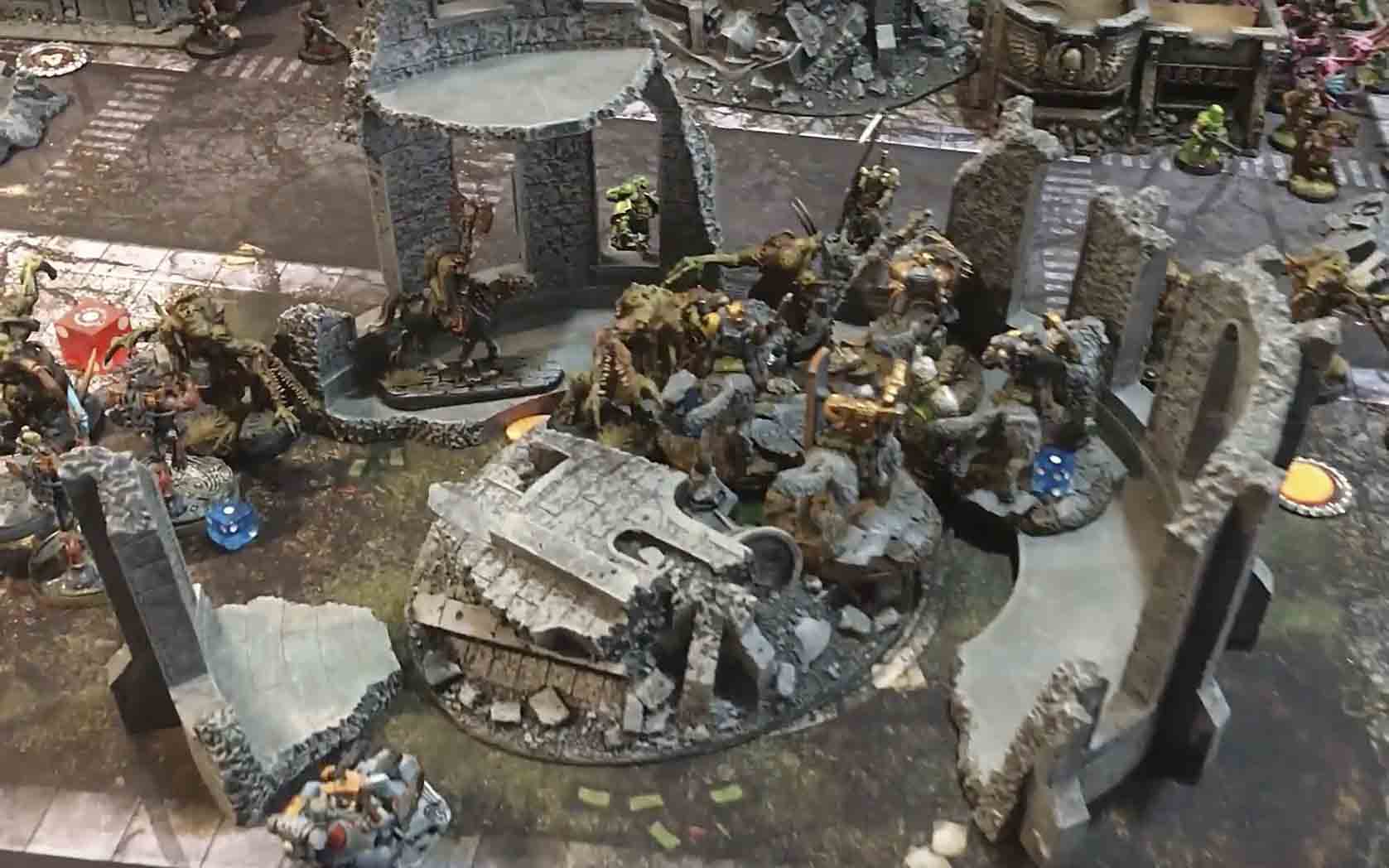 M:In the next round I lose  a thunder wolf and a few others, however, they where there to take wounds so that’s going as planned.

K: Meanwhile, Typhus is stuck in a challenge with a scrub and Typhus isn’t killing the scrub; I can’t tell you how annoying that is.  At this point you’re winning the war of attrition and any psychic slipups will devastate me.

M: The Wulfen meanwhile are doing they’re thing but they’re still in combat and I’m not used to that, they usually just run over everything.

K: The Wulfen are doing a lot of work but I’m able to get my wombo combo of powers with 20 dice and that is keeping me alive. 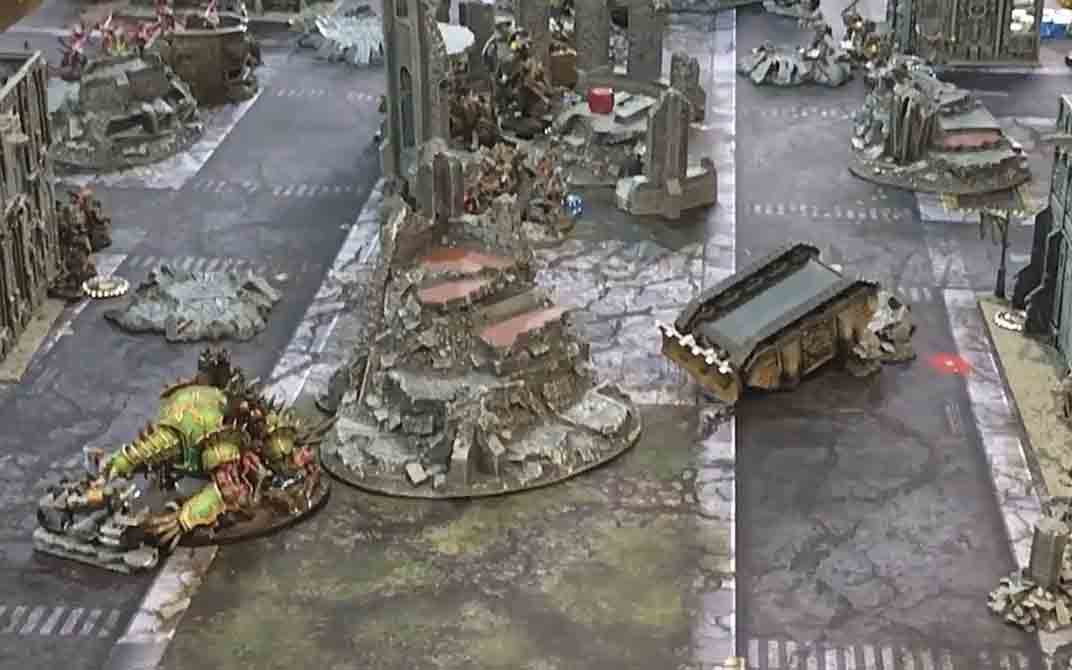 K: The mauler fiend misses all his attacks on the rune preist which means I’ll be able to kill him in your turn which means a turn 3 assault from a mauler fiend, that’s amazing because i’m happy if they survive round 2. Meanwhile, Typhus finnaly does it, he rolls a six and wipes out mikes Thunderwolves with his force weapon.

K: Now, I get to assault into the wulfen, who, only half of them have invulvnerable saves and this is a turning point and could mean I blow through your second death star which I hadn’t even considered.

M: The mauler fiend then blows up a speeder on a long charge. I then had to cast living storm on the mauler fiend to get rid of it. My Wulfen break in my turn which means you got to assault back into them.

K: I can’t believe I got caught off guard with living storm so many times. I didn’t respect the storm enough this game and you then ace that mauler fiend. However, my horrors are finnaly able to get the last hull point off the rhino with flicker fire and they can use the escape hatch. I’m now able to get 15 zombies in the center of the table. My goal then is to get into Mike’s backfiend and crush these Objective Secure units because if I’m going to win objectives I have to kill them. I know that sounds so easy but it’s really not.

M: Now I’m thinking the game could end, so I’m trying to hold as many objectives as I can. I tank shock the horrors, assault all the zombies with my rune priest to challenge that center objective. 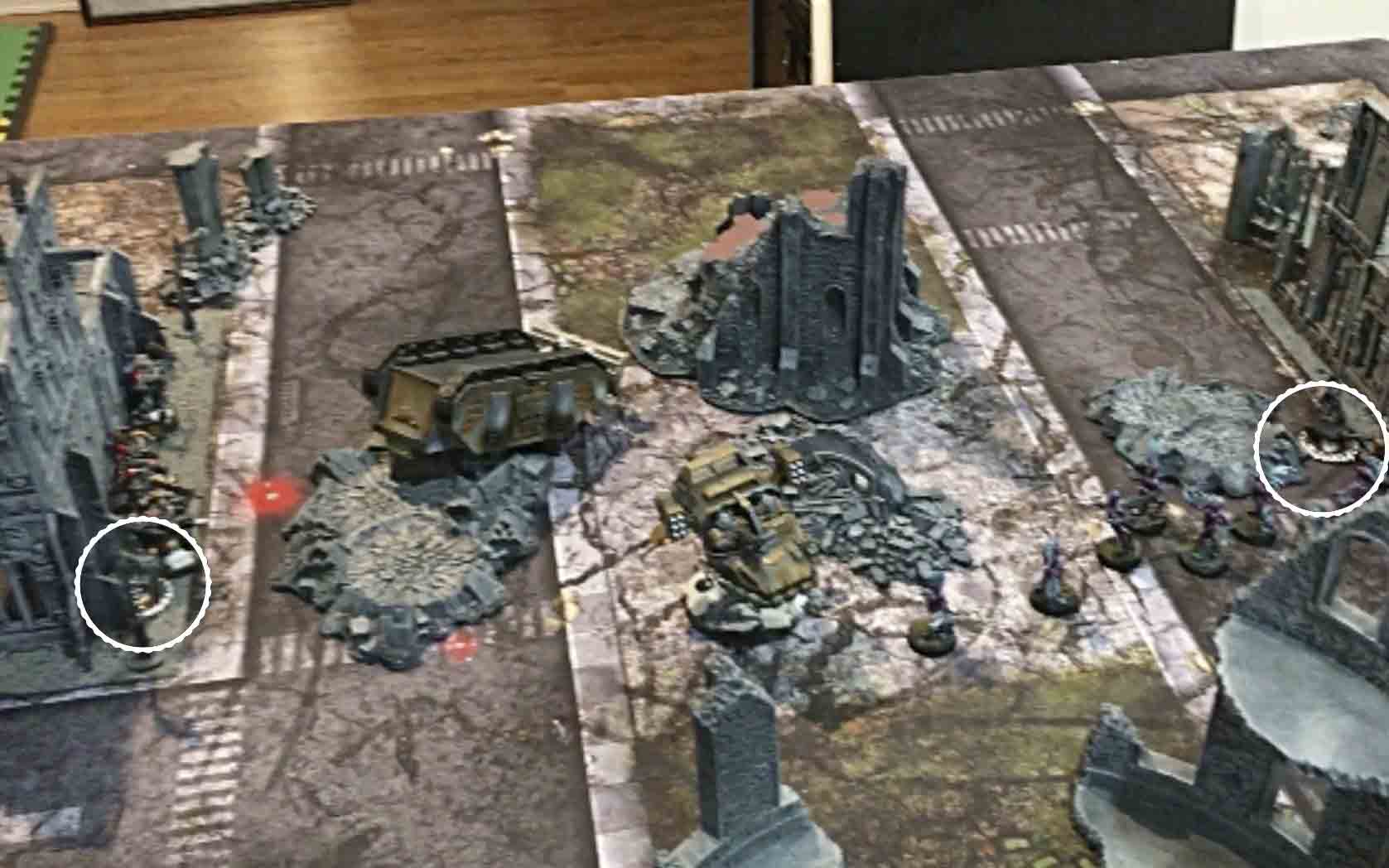 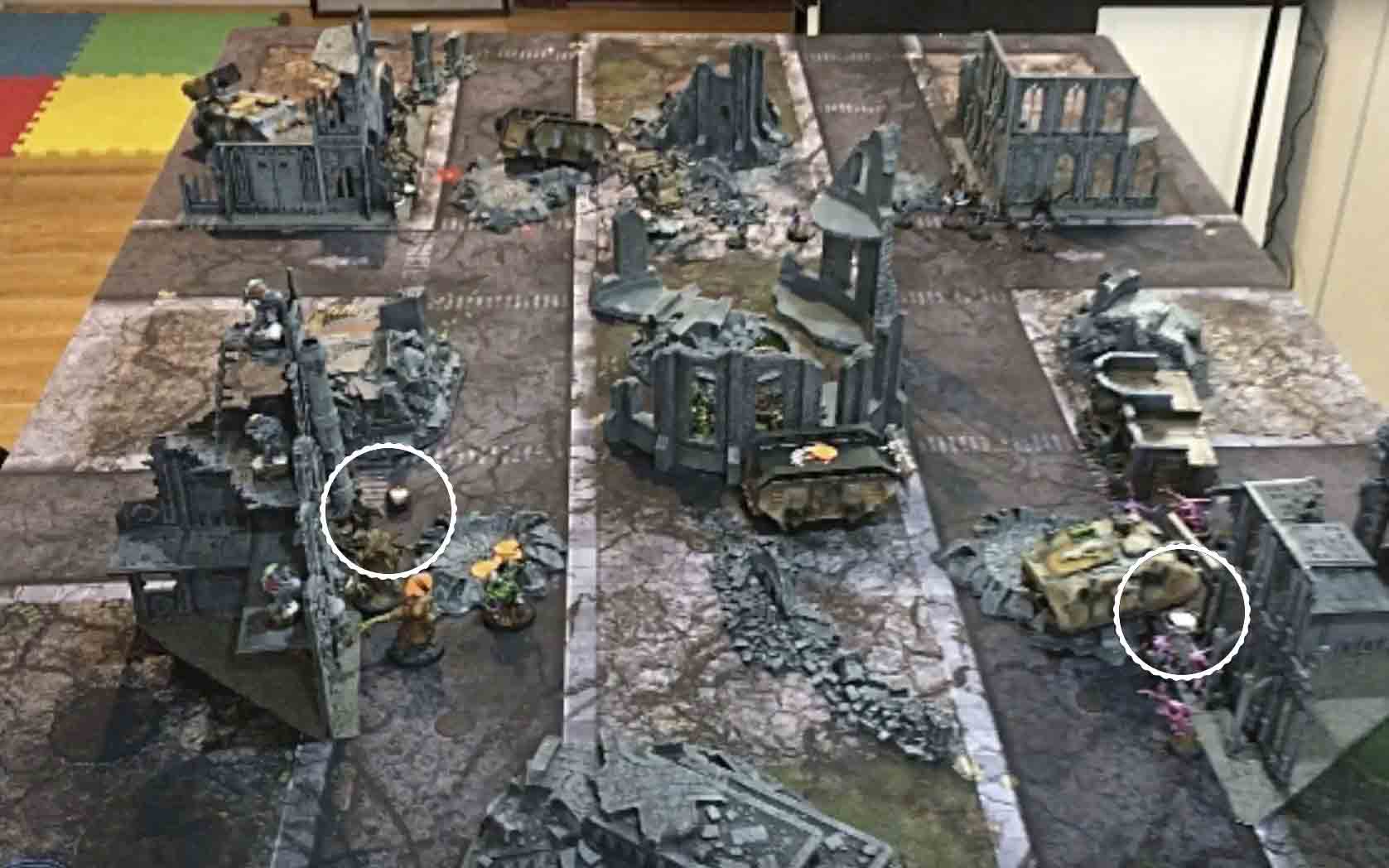 K: That move was so clutch. So now, looking at the table  we have a wash in the bottom two, a split in the top two, another wash in the center objective because of the run priest. So, it’s down to secondary. For line breaker, I have a pocket sorcerer in your backfield.

M: Meanwhile, my ruin priest has made a huge end around and ended up in your backfield.

M: Yeah, that was really the turning point.

K: Here at The Long War, we advocate a battle point system not win-loss because this game shouldn’t boil down to a win-loss, this was a hard fought game and this game is about spending 3 hours enjoying the game not so much winning or losing by just one or two points.