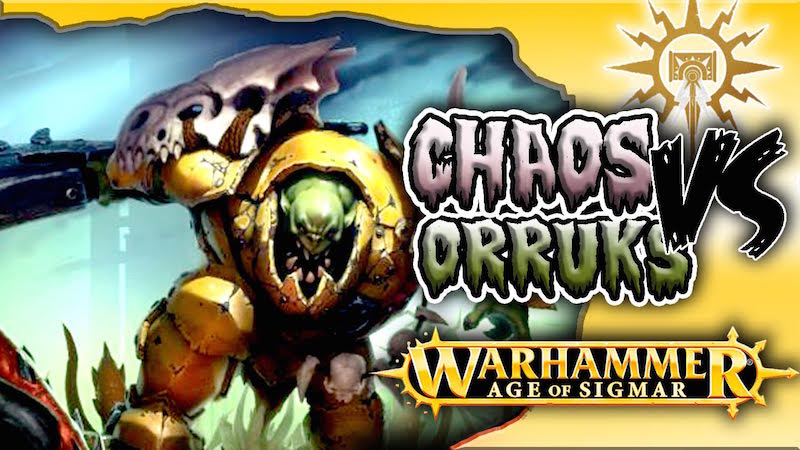 Looking for a summary battle report and a great video? Look no further, The Orruk tide is crashing into the Nurgle Rot.

We’ve got some Orruks that look like they’ve come right out of the book. I can’t stress enough how amazing Felix painted these. He said his paint game was upgraded by none other than the world famous Kenny Boucher. Turns out, if you watch his videos you’ll get better. 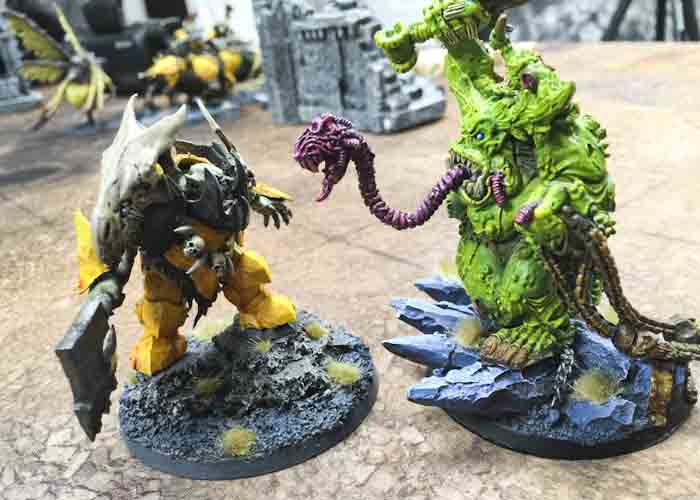 We’re playing 1,000 points, Vanguard armies out of the Generals Handbook.

We had a blast making this video and we hope you’ll enjoy it. If you’re the kind of person that wants the full blow by blow and see all the dice rolled check out the video. For the rest of you, we’ll do our best to summarize what happened.

Juice: I have 18 models, I feel like this would be the army I would want to play because it’s an elite army but I’m not sure how this is going to play out because the mission requires you to have 5 guys to claim an objective.

Rob: In this mission, you’ll need to have at least 10 models still alive in order to win a major victory.

Juice: I’m so worried about this because if I lose 5 dudes that’s a big deal. 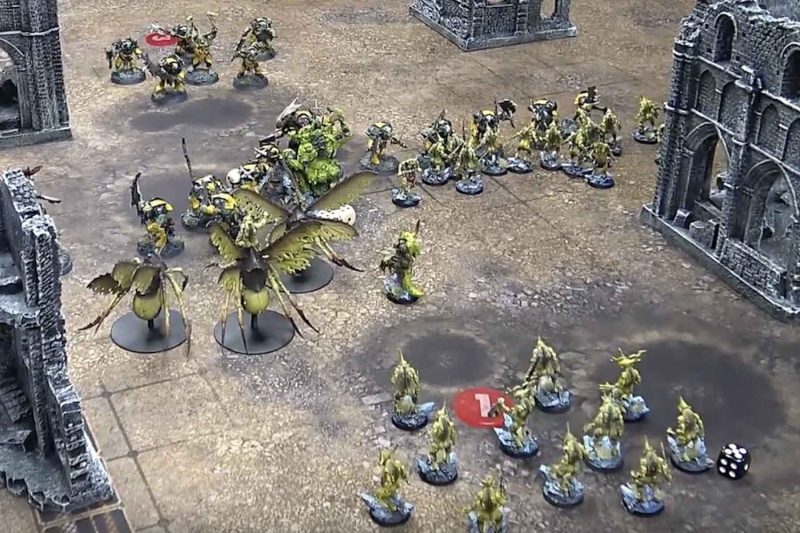 Rob: Papa Nurgle shambles forward with the majority of his army but leaves the 10-man squad in the back. Mystic Shield is cast. That turn was pretty simple. My Plague Drones are going to try and sweep forward if the Orruk’s breakthrough.

Juice: Wow, so much to do in the Hero Phase, I’m really excited about this. I use the hero ability “Bellowing Tyrant”, +1 to hit, on a squad of Brutes. The Warchanter uses “Frenzy of Violence” to buff up another squad of Brutes; +1 to hit. Then I call a Waaagh! and now everyone gets +1 attack. Oh, I’m still in my Hero phase, and we’re going to use the battalion ability and get an extra d6 inches of movement. One unit of Brutes doesn’t roll so great so I leave them in the back with the Warchanter.

The Orruks get a first turn charge off and pile into the mass of rot. In the combat, the Brutes do a lot of work. So much work that the Gore Grunta’s are left with nothing to kill. The Orruk’s then win the roll-off and get to go back to back. 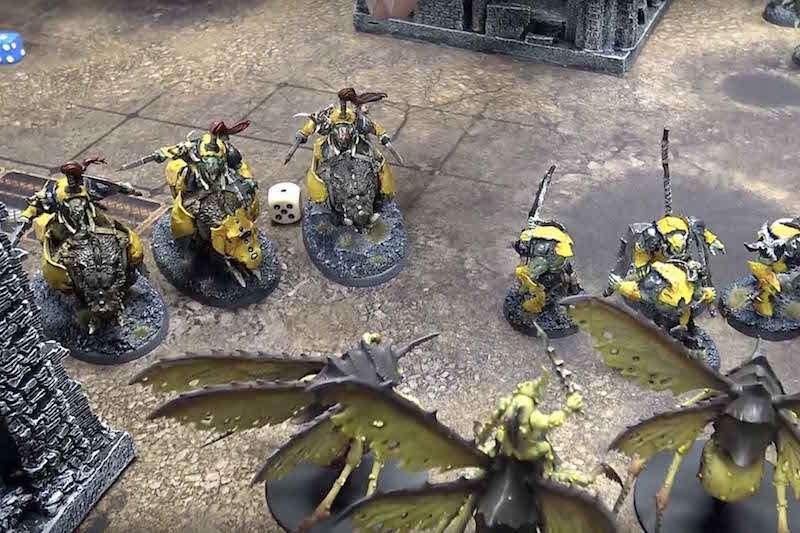 Juice: I’m going to shoot for the backfield and see what kind of disruption I can do in the background. The Megaboss chops up Papa Nurgle on a wave of amazing rolls. 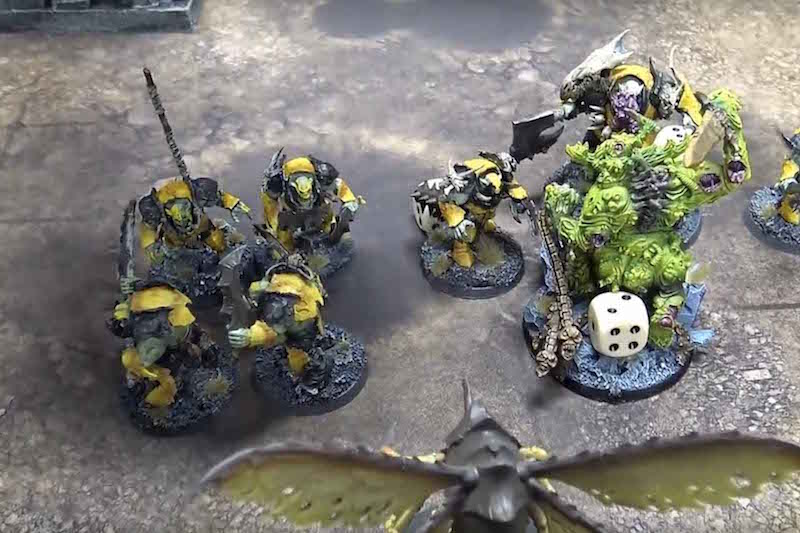 Rob: This was a big swing in the battle. Going twice is brutal but it makes you think really hard about your movement because you don’t know if the tide of battle is going to stay with you if you’re going first. Regardless, in my turn I boost up the Plague Drones and regenerate one thanks to the Warscroll ability. The Herald summons in Nurglings who then assault into the Ork Megaboss.

Some bacon is made some of the rot is returned to nurgle and the game continues on. In the roll off Nurgle grants his minions the back-to-back go.

Rob: I get in there and do some damage. I get a squad of brutes down to one model but Juice rolls a 2 on his Battle Shock test so he stays. Meanwhile my bearers hang tough in the face of the green tide.

Juice: In my turn I opt to come off my objective with the five brutes in the back and run up into the melee because Robby B has left his objective. The brutes rush in start swinging towards the flies.

Rob: At the top of turn four there’s not a lot of movement to be had we go right in the melee. I active my plague flies because I really don’t think I’ll be able to endure much more. I take down an Orruk but the dice refuse to obey Papa Nurgle so there’s still plenty left standing.

Juice: At the top of turn 4, thanks to Nutrition and good dice rolls I whittle his army down to just 2 wounds left. That leaves me plenty of time to run back to my objective and claim his. So we’re going to call it here. 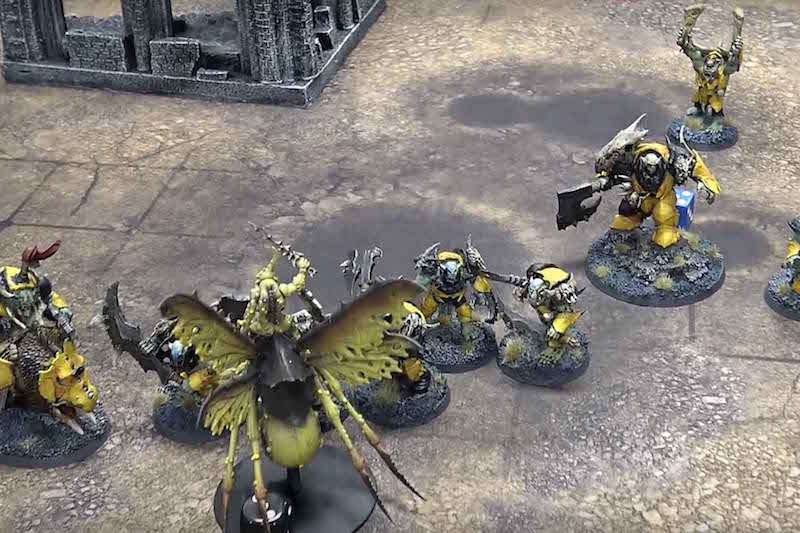 Become a Veteran of the Long War