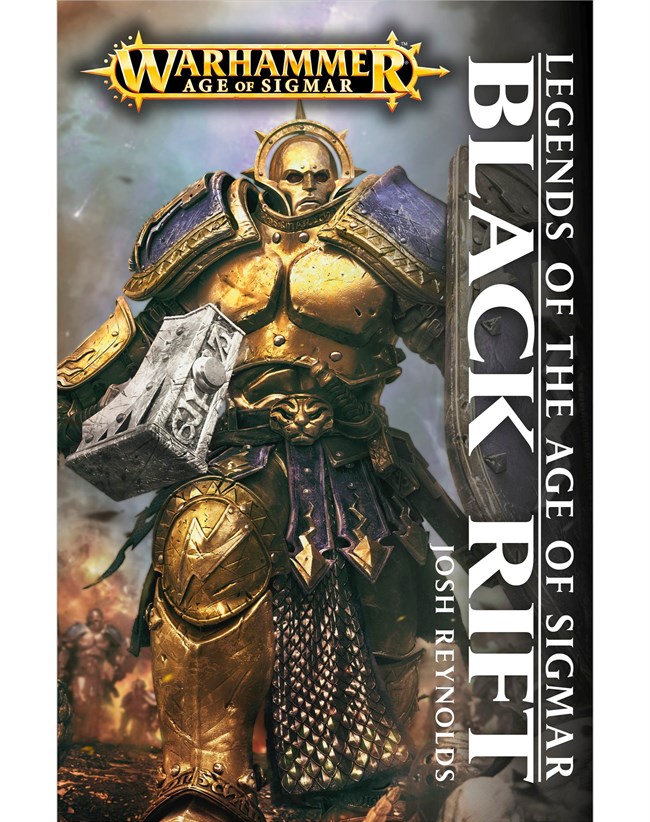 What could have been a rather cut and dry story ended up being one of my favorite books for AoS so far.

The Age of Sigmar novels have been coming out at breakneck speeds, which is great for everyone wanting to immerse themselves in the lore. One of the latest is Black Rift by Josh Reynolds, focusing on the classic match up of the Stormcast versus the Bloodbound.

Black Rift originally was released as a series of eight e-shorts on the Black Library website, with the first one coming out basically with the release of the game. Like Call of Archaon before it, the stories were all compiled together and printed as a good old paper book. It’s also unique in the fact that it’s a Legends of the Age of Sigmar book but doesn’t focus on a specific race like the Fyreslayers and the Clan Pestilens book did.

The story opens with Orius Adamantine leading his Warrior Chamber of the Hammers of Sigmar against the bloodbound. They are assaulting the crater kingdoms of Tephra in Aqshy, which had very recently been conquered by khorne’s warriors. The world building in this is fantastic. You really get a sense of what this place was like back when it was a functioning kingdom. We only see the kingdom of Klaxus, but all of the other kingdoms got a ton of name drops, and it seems like their is a jungle inside this crater that separates the kingdoms. In fact, it seems like this crater must be massive in size. The world building is never presented to you all at once in an exposition dump either, it’s slowly built up as the Stormcast push their way through the city. It all felt very organic and completely believable within the Realms of AoS.

Everything is suitably AoS-ified as well, with a bunch of crazy, high fantasy shenanigans going on, like a living gate that attacks anyone nearby. Even though it’s completely over the top it feels completely natural within the story and the universe. This is when AoS stories work the best for me, when the author is able to find this perfect balance of crazy and plausible. Even though the setting is fantastic the true star of this book are the characters.

There is a huge cast, on both sides of the fight, and every single one of them feels fleshed out, unique, and worth caring about. Our main character on the Stormcast side is Orius, and as good of a character as he is, he’s really more of a foil for Anhur, the mighty lord of Khorne. The two were friends as mortals and led a rebellion against the kings of Klaxus. Orius was saved by Sigmar while Anhur was forced to flee and eventually fell in with Chaos. It’s a really interesting dynamic and shows how easily it would have been for Anhur to be saved and for Orius to be the villain. This isn’t the first time the pair had met since the Stormcast’s return to the Mortal Realms, but their initial battle is only alluded to throughout the story and here and there we get a little more information on it.

Some of the other major Stormcast characters are Moros the Relictor, Gorgus the Castellant, Tarkus the Heraldor, Kratus the Knight-Azyros, and a Vexillor. All of them are extremely interesting and I was completely invested in all of their fates as the story went on. This is really pretty impressive since a lot of the time the supporting characters fall off to the side, but I would definitely like to see this entire cast make a reappearance in the future.

As interesting as the Stormcast were, the Bloodbound really stole the show. Anhur is surrounded by his “loyal” Gorechosen, with each of them given a unique personality and in most places a significant chunk of the story to shine. Some of my favorite are Hroth, the prime Deathbringer, Apedamark, the Slaughterpriest, and Volundr, the Skullgrinder who is just excruciatingly awesome. Interestingly there is also a Skaven warlord Warpfang who wants to be a member of the Gorechosen and earns Anhur’s respect and Pazack, a Nurgle sorcerer bound to Anhur’s will. All of the other Gorechosen have some interesting quirk as well, and each and every one of them has a backstory. Anhur’s plan is to unleash a tide of demons across the crater kingdoms using something called the Black Rift and ascend to demonhood in the process.

It’s amazing to me how a story that is really just one long battle as the Stormcast breach the outer walls of the city in the first chapter and assault the central area in the last, can be so interesting and characterful. It really didn’t feel like just one battle and I was completely enthralled the entire time. I don’t want to give away too much more of the storyline, so just trust me, this book is amazing and a must read for all AoS fans! The amount of personality that Josh has been able to inject into his characters really makes this a stand out book for me. This is a great starting off point for someone just getting into AoS too since it’s completely self contained and also focuses on the two main forces we have seen so far. So what are you doing still reading this review? You should be reading Black Rift, trust me.