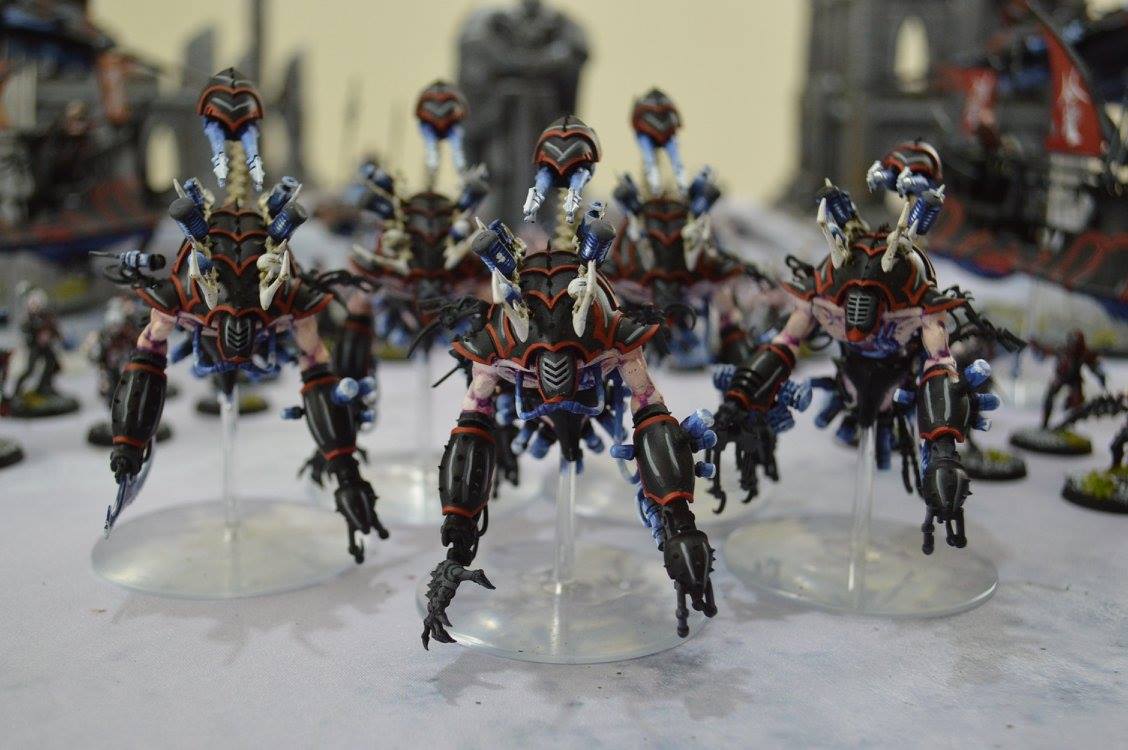 The Xiong’hrru had called it the Tome of Truth. Their pontifex had gouged out its eyes with its own claws after reading the “revelations” within. Within three months the Xiong’hrru, who had contested the dominance of the eastern fringe with the Eldar in the days when humanities ancestors was still learning to walk upright, were no more. They had willingly flung themselves into sacrifical pits by the trillions until their entire species was nothing but a cursed memory. Such is the price of “truth”. The Shivkar Empire had wilfully traded their eyes for the secrets the book promised to reveal to them and them alone. The devolved Shivkar were liberated from their trogloditic existence by the ever-expanding armies of the nascent Imperium of Man. Whatever secrets they learned lay long lost in the filth encrusted shard-ruins of their once grand glass cities. Their horror-stricken eyes still blink from the pages of that accursed tome. The Grom had thought to glean the secret of immortality from its many-eyed pages. The Grom now served as immortal pleasure slaves in Slaanesh’s pavilion of one thousand and one cursed delights. Ever-living. Forever in unknowable agony. The Eldar had called it “The Book of Lies” and had stayed well clear of its honeyed whispers of forbidden knowledge, of futures written and pasts yet to be known. The Imperium’s traumatic experience with the book are long deleted but such is the trauma it caused that rumours of the catastrophe continue to be trafficked by the seditious and the heretical. The Inquisition crushes these rumours with extreme prejudice. The book survives. It can never be destroyed since it is a sliver of a far greater being older than the main sequence stars that burn furiously at the galaxies churning heart. It seeks out new prey. It calls to them. Even now.
Can you hear it?

….and here we go again!!!!! Welcome back everyone, Its absolutely boiling here in Gibraltar, 32 degrees today so not very nice when your playing Warhammer with no A/C….. LOL Well we do have a little treat for you today, The Dark Eldar are back at the studio and with a very cool list using the dreaded Corpse Thief Claw!!!!! For those who haven’t heard of it before you will see what I mean! The Team set up another beautiful battle ground using some amazing Terrain made by us and Escenorama from Spain, combined with another amazing mat by GAMEMAT.eu. All of which brings an awesome sight to the table. Well with no further ado lets get this show on the road….. Ethan wins the first roll off and opts to go fand deploy first. Night Fighting is rolled and it is confirmed that there will be darkness today (and a happy grin from Ethan) Lets do this!

Awesome Objective made by our good friend Dave Williamson! Thanks Dave! perfect for this special relic scenario.

So it begins. The deadly Corpse Thief Claw is deployed first. A unit of 5 MC’c packed with 5 attacks each on the charge and amazing toughness 7, 3+ armour with 5+ FnP. All of them equipped with ichor injectors giving them a fleshbane and instant death on 6’s for some extra pain goodness. They also get an extra Vp points for every non-vehicle unit they kill in combat. Boom!

Ethan then deploys his Wych full Raiders behind some ruins for cover just incase Steven steals the initiative…. The closest also transporting Urien. The rest of his army stays in reserve with his scalpel squadron entering play via deep strike on turn one also giving an extra VP if any enemy unit is completely destroyed on the turn they arrive. Very cool to have two formations that can give you extra VPs. This will be a tough one for Steven and his Raptors as Ethan has the upper hand from the get go.

Steven’s turn now to deploy. His very impressive Raptors are quite a strong list, lets see how this pans out. The Chapter Master leads the way. Awesome sight and awesome model painted by Robpaintsmodels.

The Imperial Knight is deployed just beside the bike squad and Chapter Master, already setting his eyes on the Corpse thief claw…. or is it the other way round? Those Haywire Blasters will surely give the Knight some problems.

Steven Deploys his Devastator squad at the very back making good use of the Pipelines for cover. Only having one other unit (Storm Talon) to deal with Ethan’s two flyers, it’s a must for steven to keep these Flakk Missiles alive.

Impressive view just before Infiltrators are placed and Scout moves are made. Loving the table set-up with the big line of sight areas made by the roads.

The Scouts infiltrate on one of the Ruins by the roads hoping to lay down some rending bolter goodness to the enemy below.

The Corpse Thief Claw scout moves forward……… Ethan has shown some serious balls deploying them in the middle (no cover), but with some Grav centurions coming in via drop pod this turn, was it really the best idea….?

Turn 1 (Dark Eldar) The Scalpel Squadron appear! Ethan confidently places his first venom packed with wracks awfully close to the table edges. With a lucky roll he lands exactly where he had planned. The second goes the same way on the other flank. It’s placed in a risky position but once again is safe, only scattering 3 inches towards some of the pipes. Two venoms behind enemy lines, brave….? Dark Eldar trickery!

Turn 1 (Dark Eldar) We roll for the Relics teleporting but it just seems to flicker in place. (Reminder: Special Relic Rules – When not controlled by anyone the relic randomly teleports 2D6 inches)

Turn 1 (Dark Eldar) Ethan moves both his raiders forward from hiding and stops next to one of his Talos. Now they’re out in the open, is he that desperate to take a couple dark lance shots in the clear…or does he have something else in mind? Are we overestimating his tactical nous?

Turn 1 (Dark Eldar) The talos take aim towards the Imperial Knight with their twin-linked haywire blasters, hitting with all 5 but only glancing twice and penetrating once, yep… Ethan rolled 2 ones. To make matters worse Steven passes all but one of his Invulnerable saves resulting in only one hull point being removed from the Imperial Knight. Not the best of Starts for the Dark Eldar. “Though the artifices of evil are many, a bolter round kills just as assuredly.”

Turn 1 (Dark Eldar) The Venom and Wracks fire their full load towards the bikes in front hoping to stop them in their tracks…. Steven opts not to jink and Ethan starts to shoot his full load out towards them. Lets see how this goes.

Turn 1 (Dark Eldar) More bad shooting from Ethan combined with some nice saves from Steven means only one bike removed due to the Ossefactors AP2 shot. Sadly for Steven it’s one of his Grav gun Bikers. 🙁

Turn 1 (Dark Eldar) So that was his plan! After moving up the right flank, which made Steven wonder what was going on. Ethan opts to move both raiders flat out towards the centre creating a broadside barricade at the narrowest part of the battlefield. He hopes that this wall of metal and Wyches will slow Stevens forces down enough for his slow Talos to catch up and for the flyers to arrive.

Turn 1 (Raptors) These guys mean business! The Drop pods lands! A direct hit and out pour the deadly Centurions and the Librarian who straight away casts prescience upon them. Exciting to see what happens next! if they target the Corpse thief that will Hurt Ethan a lot!

Turn 1 (Raptors) The first of two tactical squads disembarks and moves towards the newly deep struck venom. Hoping to bring the skimmer down I presume….

Turn 1 (Raptors) The Chapter Master orders his bike squad to move forward towards the raiders and ready their weapons. The Imperial Knight follows abreast – two very strong units advancing side by side… what a sight. The Corpse thief claw awaits patiently on the other side!

Turn 1 (Raptors) The shooting phase starts and just what I thought…. OUCH! The centurions let rip and easily remove two talos from play and remove a further wound from another with the help of the librarians prescience! Ethan that was a very bad move! 😀

Turn 1 (Raptors) An amazing shot from the Razorback sees the Raider explode into a pretty cool fireworks display as Ethan fails his jink save…. To make matters worse 5 Wyches get killed in the ensuing explosion… “We go where we wilt. We slay who we wilt. Let the Emperor judge the righteousness of our deeds!”

Turn 1 (Raptors) The Imperial Knight fires its 2 deadly battle cannon blasts at the approching Talos. The first one scattering off into oblivion but the second one getting a straight hit wounding two of the Pain Engines. Ethan rolls his FNPs but he only passes one and so the middle Talos is wounded after measuring base to base and seeing he is closest.

Turn 1 (Raptors) The Scouts try their luck and fire at the approaching Talos hoping for some 6’s to wound and try to rend these tough creature, which is their Raptors chapter tactics. Loving this photo! Can really imagine these scouts waiting for the perfect opportunity to start firing from the infiltrated ruins catching the Talos by surprise! Sadly they fail to wound…

Turn 1 (Raptors) The Bikes open fire on the wyches and Urien but Urien proves too strong and his high toughness and FNP rolls too good for the incoming fire as he doesn’t even get touched, the gravs having to wound on 6’s.

Turn 1 (Raptors) The Chapter Master and Bikes charge in removing a further wych with their hammer of wrath attacks. Straight away The two warlords face-off as Steven challenges Ethan in a duel to the death! Awesome sight! Can’t wait for this! Bets anyone?? “Fetch me another plaything. This one seems to have broken.”