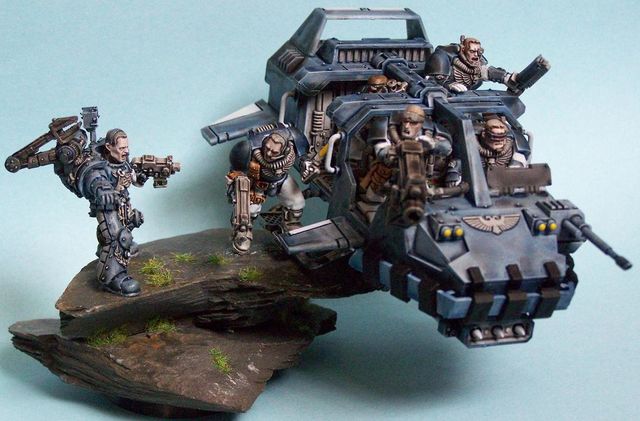 Today we look at the sneaky half of the TROOPS choices in the Space Marine codex. Welcome to the 10th Company! A guest article by Berent McSavage.

There are only two formal troop entries in the Space Marines Codex, (Crusader squads and Bike squads are excluded from being counted as formal choices) and taking 50% of the options are the infamous scouts!

This unit has it all when it comes to special rules, which means more tactical flexibility for your 40k games, and enhanced abilities to display the savage 40k life. This is a unit that no Space Marine play can overlook, as they are no longer scrubs they once were in prior editions. Check the Tactics Corner for more great articles. Buzz and Woody know what’s up!

Scouts share every single stat line with the Tactical Squad (WS4/BS4/S4/T4/W1/I4/A1/Ld8), however have an inferior armor save at 4+. Consequently, they cost 15 points less than the Tactical Squad. They fulfill so many roles that Space Marine players can look to for support that other units in the Codex cannot fulfill. There are many ways to look at Scouts. One way is to see them is as a cheaper Marine with a worse armor save, a second way is to see them as fast and swift objective holders, and thirdly as the brave unit to start off in the most optimal position vis-a-vis scouting, infiltrating, and outflanking. All scouts are named Jack, as they are the jack of all trades!

A squad of 5 scouts cost 55 pts, or 11 pts per model. They come equipped with Boltguns, but can substitute them for close combat weapons or Space Marine Shotguns for no additional points cost. Because of the special rules they are given (scout and infiltrate) they can capture objectives without the need of a dedicated transport (though the Land Speeder Storm is exceptionally good and underrated) or running up the battlefield. Scout squads have the ability to fulfill multiple roles in a Space Marine army, and can compliment or replace your other traditional troop choices. In this part I will discuss optimal load outs and battlefield roles.

In terms of weapon load outs, the bolters are your best option, as it gives you a good amount of reliable firepower at a medium range. This is especially good on scouts now more than ever, because of their improved ballistic skill (used to be BS 3 in prior editions of 40k). Bolt pistol and close combat weapons can also be a good option to have. A min-sized unit can dish out 15 attacks on the charge. Shotguns are also a decent option if you want to have maximum firepower before assaulting. Sniper rifles are the least useful on scouts, as it counteracts any mobility they have if they desire to shoot with accuracy. Additionally, Sniper Rifles are not a compelling piece of wargear as it it cannot do much against armor with consistency, and only gives scouts an additional 12 inches of shooting distance. Weapons with the “Heavy” special rule are not particularly good with scouts in general as it inhibits their mobility, and just adds unneeded points a la the Missile Launcher and Heavy Bolter.

A good upgrade for scouts I personally like, and use quite consistently is the Camo Cloak option. This option gives scouts a natural 6+ cover save in the open and +1 to any already existing cover save. Scout armor is not the most impressive at 4+ when compared to power armor and up, but scouts in cover with cloaks become extremely hard units to shoot down if your opponent has no way of negatively modifying cover saves or outright ignoring it. In ruins, scouts have a 3+ cover save and can go to ground for a 2+. Scouts in cover do not care about AP, they just fear Auspexes, and anything that can ignore cover. Scouts are better when they are more durable than offensive. Nothing is more satisfying than having one scout fend off all the shots to hold you that crucial objective. Other parts of your Space Marine list will cover offense with either strong assault or shooting. In terms of Chapter Tactics, all of them excluding Black Templars help out scouts in either defensive or offensive capabilities. For defense the best options are Raven Guard and Iron Hands. Raven Guard provides shrouding to your Scouts for the first turn and a +1 on the roll to determine if the Night Fighting special rule is in effect. This means that Raven Guard Scouts will have a 2+ cover save in ruins and a 3+ in regular cover. Effectively, Raven Guard Scouts are the most survivable on turn 1 without the need to purchase Camo Cloaks. But the main caveat is that it is only a one turn buff that can be closely mimicked by camo cloaks for a small cost that lasts the entire game. Iron Hands provides Scouts a 6+ feel no pain save, which is always good to have especially when stacked with a cover save. The more ways you can stack and layer saves on your Scouts the more objectives you can hold with them.

Ultramarines, Imperial Fists, and Salamanders provide Scouts more offensive buffs. With both Ultramarines and Imperial Fists you will be able to re-roll 1’s on bolter profile weapons (Ultramarine Scouts can do this for two turns without any additional abilities to call the Tactical or Devastator Doctrine). Salamanders enable the sergeant to have a master-crafted weapon, which couples best with a comb-weapon. Having a reliable melta or plasma shot is pretty good when you have your Scouts deployed close to or in your enemy’s back lines. Additionally, Salamanders are resilient against flamers. This means that Scouts will get a 4+ FNP save against Heavy flamers (but not against the Heldrake’s flamer because it shoots Daemon spirits!), which will normally take out Scouts from different chapters with ease. White Scars perhaps is the most well rounded Chapter Tactic for any Space Marine army, and this extends to Scouts as well. Having Hit & Run is a phenomenal special rule to have, and being able to re-roll run distances is nice when you are required to get across the tabletop.

So, which Chapter Tactic and gear load out is the best? Based on the games I have played and analyzed I would have to go with Bolter Scouts with Iron Hands Chapter Tactics. Having that 6+ FNP as a second line of defense really enhances their durability on the tabletop. A close second would have to be White Scars, just because Hit & Run and re-rolling run distances can get you out of unfavorable combats and onto objective points.

Scouts are no longer the sad lads they used to be in prior editions, as they can shoot just as well as their Marine bros! They bring so much to the table through their special rules that it is hard to see why you would not take them. The only missions they do not perform all too well in is kill points, as they can be mowed down at the standard 5 man squad. If you have not used Scouts before, I recommend you go out and get a box of them ASAP, and incorporate them in your lists. I used to think they were scrubs, but now I always include one to two squads of Scouts in my Space Marine armies alongside Tactical Marines and Bike Squads. Scouts are McSavage approved!