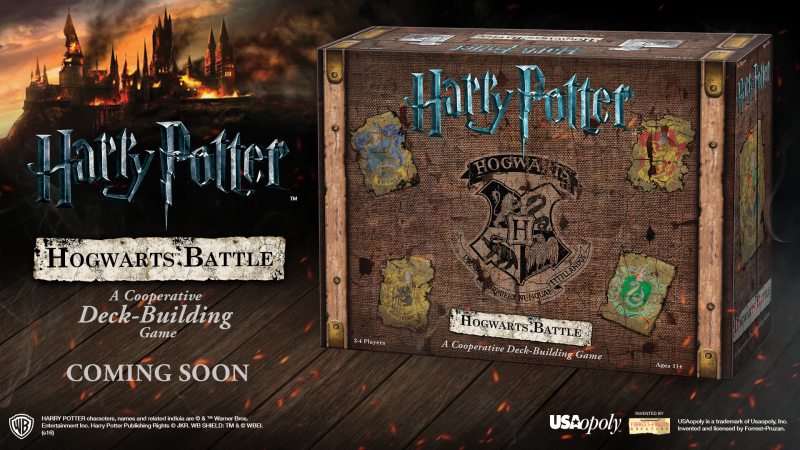 Get a chance to play the newest games before they hit retailers!

Alohomora! Be the first to unlock the magic of Harry Potter Hogwarts Battle – A Cooperative Deck Building Game as it makes its debut at Gen Con 2016! Players take on the role of a HOGWARTS student: Harry, Ron, Hermione or Neville to defeat the villains and save Hogwarts! This highly anticipated game will be available for the first time exclusively at Gen Con, allowing attendees to purchase and demo the game a month before anyone else! Stop by to sign-up for a 45 min demo at the Harry Potter side of the USAopoly booth and receive a special promo card at the end of the game. Additionally, when you purchase one of the limited copies of the game you’ll receive our game launch pack including 3 promo cards, while supplies last.

Star Trek™ Panic® boldly goes where no board game has gone before as players join the crew of the U.S.S. Enterprise on a voyage to defend the ship from enemy attacks and carry out galactic missions.

Be one of the first to receive the exclusive Vulcan Mind Meld promo card when you demo or purchase the game at USAopoly’s booth. Receive a bonus U.S.S. Enterprise ship to display with purchase!

We have lots of family fun in store at USAopoly’s booth including demos of our new fast-word-fun card game, Tapple 10. Join us and demo our Gen Con 2015 hits including Lift It! Deluxe, Nefarious, and Wonky.  There will be plenty of games in stock for you to take home and share with friends and family!

Be a part of our daily raffle! When you demo a game with us, you’ll receive a raffle ticket to enter to win games! You must be present to win. Winners will be pulled at 4 pm on Thursday, Friday, and Saturday, and 2 pm on Sunday. Get there early as we always draw a big crowd!

We will have something for every age and every type of gamer at booth #1813!

Start planning for the Best Four Days of Gaming at Gen Con 2016. We hope to see you there!

Is USAopoly on your list for GenCon this year?