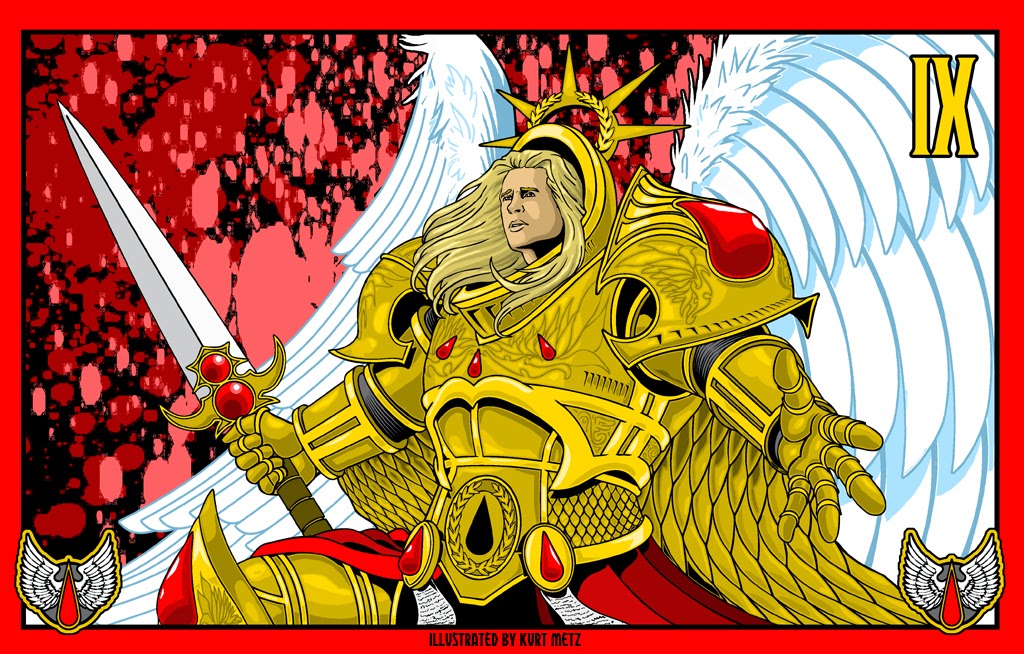 Today loremasters we delve into the horrific battle for Signus Prime, which has darkened the Blood Angels’ soul for ten millennia. 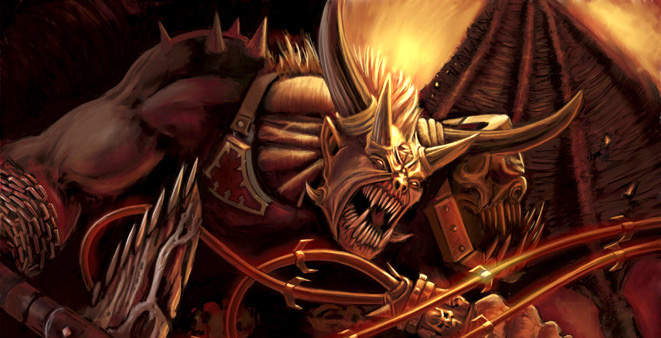 During the Horus Heresy:

In an attempt to divide those loyalist legions he could not sway to Chaos, Horus dispatched them to the farthest reaches of space, where they unwittingly walked in traps of his and his masters devising. The Blood Angels mission to the Signus Cluster, near to the galactic core in the Ultima Segmentum, was one such venture, where the system of 7 planets and 15 moons had been taken over in bloody slaughter by the daemonichordes of a Greater Daemon of Slaanesh, Kyriss the Perverse. Thinking that they were arriving to liberate humans from their xeno-overlords, Sanguinius had no reason to suspect that his best friend, the Warmaster Horus, would betray him.

When the Blood Angels fleet arrived in system, they were assaulted by Chaos energies, ravaging their Navigators and Astropaths, killing many outright, as well sending mad panic through the Legion’s ship serfs and auxiliaries, who until then had never felt the effects of Chaos. Most Space Marines were immune to its effects due to their training and iron-will, leaving those few not driven mad to restrain the crazed crew members and erect psychic baffles. The daemon conqueror of Signus, Kyriss, had time however to beam an image of itself to the Legion’s Primarch, challenging him to take back Slaanesh’s newest conquest. At this Sanguinius gathered his senior officers and organised a counterattack against a foe they had no experience fighting, however, sure of their victory, Sanguinius declared This foul creature will know what it is to face my wrath. I shall strike him down, I shall be an Angel of Vengeance!

With Signus Prime covered from pole to pole with the result of daemonic invasion, with millions lying dead in the streets or held in prison camps to await daemonic whims, with cities razed, oceans boiled away and plains burn to cinders, the Blood Angels Legion struck in a furious counterattack, falling from the skies to engage crazed cultists and packs of hideous daemons upon the Plains of the Damned. Sanguinius swore to personally cast Kyriss down and vanquish him, so hence made for the Cathedral of the Mark, the daemon’s lair. However outside its entrance, Sanguinius was faced by the single greatest foe who would have the greatest effect on his Legion and its descendants down the millenia, Ka’Bandha, Greater Daemon and Bloodthirster of Khorne.[

Confronting the Angel, the Bloodthirster spoke, attempting to sway him to Chaos, Why do you fight us, so called Angel? You may be able to best me, but you cannot hope to defeat Chaos. My Lord Khorne is powerful beyond means you can measure. Your Emperor is weak and foolish, even now he hides from us. Is he afraid to fight? To this Sanguinius rebuked, commanding the daemon to get out of his way, to allow him to cast down his master or be destroyed, to which Ka’Bhanda scoffed that his only master is Khorne, that he does not realise the threat which the daemons and Chaos hold for humanity and that their ally Horus has led Sanguinius here, into a trap whilst moving to lay siege against Terra. Ka’Bhanda further tempts Sanguinius once more, to join the forces of Khorne and destroy Kyriss and rule the Signus Cluster. 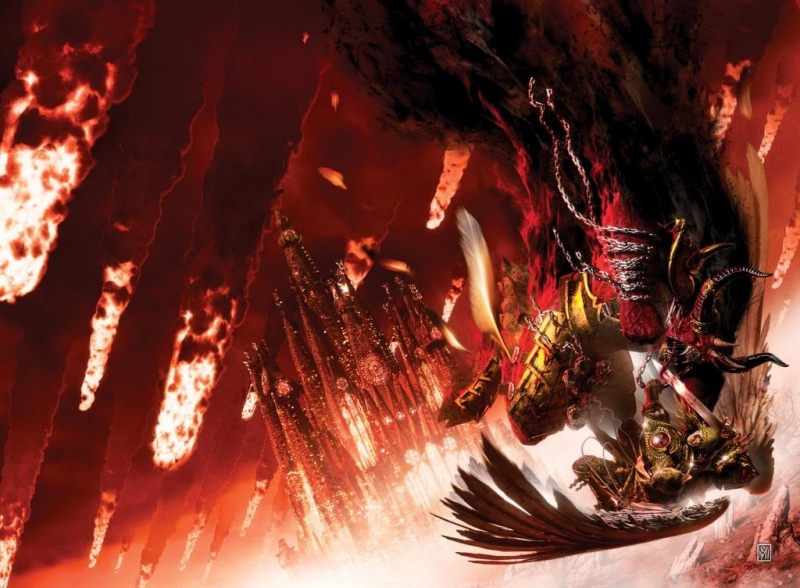 Sanguinius and Ka’Bandha duelling in midair.

Sanguinius rejected the news that Horus is lying in bed with daemons, claiming it as lies and proclaiming that nothing could entice him to spit on his oath of loyalty to the Emperor, from which he launched himself at the daemon, whilst his finest ten companies of veterans, Dreadnoughts and Terminators charged into the horde of bloodletters, hounds and furies swarming around the Bloodthirster. Plasma fire boiled daemon blood and talons cleaved power armour and gene-enhanced bone whilst the Angel pushed against the Bloodthirster, a flurry of blows from his great sword meeting the daemons axe time and time again, yet still succeeding in driving him back. Seizing the initiative, Sanguinius stabbed Ka’Bhanda through the chest, casting a terrible wound. The daemon replied in pain and anger with a lash of his great whip which caught the Angel’s legs and crushed them within its coils before being knocked to the ground be the flat of his foes axe. With the beast towering over him he taunted at it, Come at me again, daemon! Feel the lick of my sword a second time if you dare! to which Ka’Bhanda replied I let you live this time, manling. Your legs will heal but this wound will always fester. It was at this moment that the beast let loose a mighty howl and darted across the battlefield, cutting down no less that five-hundred sons of Sanguinius . The psychic backlash caused by the loss of so many of his sons cast Sanguinius into unconsciousness.

With their progenitor cast down the Blood Angels redoubled their efforts, becoming filled with a dark berserker fury which drove them to destroy the daemon horde and cleanse all of Signus Prime. Those daemons who did not fall by their blades fled back into the Immaterium along with their overlord Kyriss. As they came to victory, their rage and fury subsided, whereupon they became aware of their victory, however they had no reason to celebrate with thousands of their brothers lying amongst the daemon dead, their Primarch cast down and the dark shadow of the rage and fury they had so recently possessed looming upon their souls. When their father awoke, his legs were already healing due to his genetic abilities as a Primarch, however nothing could be done for searing anguish he felt for the loss of his sons at the hands of Ka’Bhanda. Within a few days he could manage to walk, but the agony upon his soul would not abate and with this heavy weight, he vowed that whatever the future, whatever the cost, he would rain vengeance down upon the daemon Ka’Bhanda.

It was then that the message from Rogal Dorn of the Imperial Fists was received, calling them back to Terra. The Blood Angels did not need to be informed of the severity of the situation facing them and thus they set about evacuating all personnel from Signus back to the fleet. stowing the corpses of the fallen to be buried later on the slopes of Mount Seraph. Sanguinius ordered that no trace of the Legion remain in the Signus system and that the few surviving inhabitants be transported to nearby systems. Lastly warning beacons were stationed at the warp-jump points to ward off the unwary from visiting any of the planets or moons. Signus was to be left lifeless and rotting. After the battle in the Signus Cluster, the Blood Angels were able to link up with Ultramar and under the watchful eyes of Roboute Guilliman Sanguinius was eventually crowned Emperor of Imperium Secundus.

Eventually, the Blood Angels were able to return to Terra in force.

Learn More of the Blood Angels