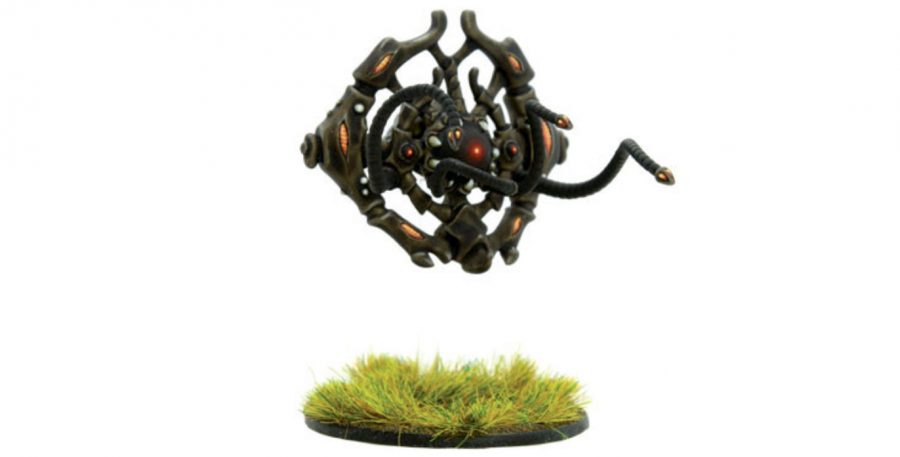 The Isorian have a new Drone Commander and it looks very unique – Check out Commander Xan Tu!

In a previous and entirely organic existence, Xan Tu was a successful commander of Senatex forces whose career spanned almost two centuries and warzones from the Northern Spill to the Vorl frontiers in the Deep South. Reaching what was a natural end to a long and active life Xan Tu elected to live on in machine form – transitioning his mind into a drone body.

Transitioning as a drone was for Xan Tu a logical choice – for it would allow him to do what he had always done – to continue to lead Senatex forces wherever they were needed. As a machine he would lose much of his human personality, but his mind would gain so much more by direct association with the IMTel.

The promise of machine existence was as close to immortality as it was possible to get. Xan Tu understood that the machine which he would become would evolve ever further from the person he had once been, but that did not seem such a terrible thing. It was, he considered, certainly no worse than the perpetual erosion of purpose and disillusionment of mere human existence.

Drone Commander Xan Tu is the first drone commander introduced into the Antares game and as a transitioned human his qualities are perhaps a little different from those of a pure machine intellect. He is a weapon drone type unit as well as a command unit, and can include further Nhamak type drones too.

Xan Tu works out relatively cheaply compared to a regular Command Squad and this is largely down to the fact he is unarmed, while his nano probe net ability is an upgrade. By adding Nhamak drones you can change things up a level, coupled with his special leadership through the Nano Probe Net (full rules on page 117 in the supplement Battle for Xilos) he becomes quite an asset to a larger force.

If you want to replace your standard Senatex Command Squad then this complete unit is for you, including plenty of drones to use as Shield, Batter, Spotter, Synchronizer, or Xan Tus’ special nano probe net. I’m getting a Matrixy vibe from Commander Xan Tu – what do you think?