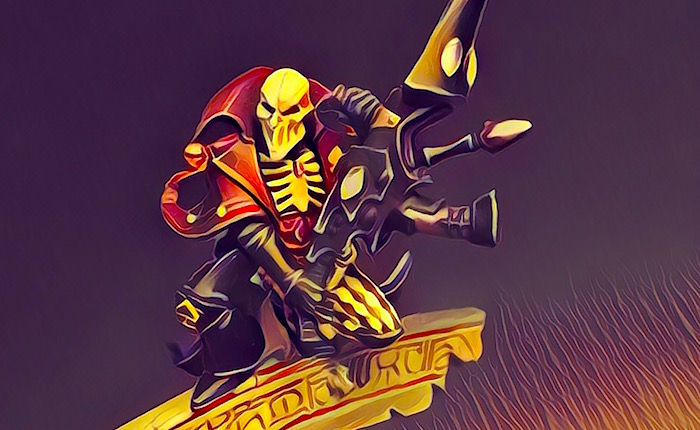 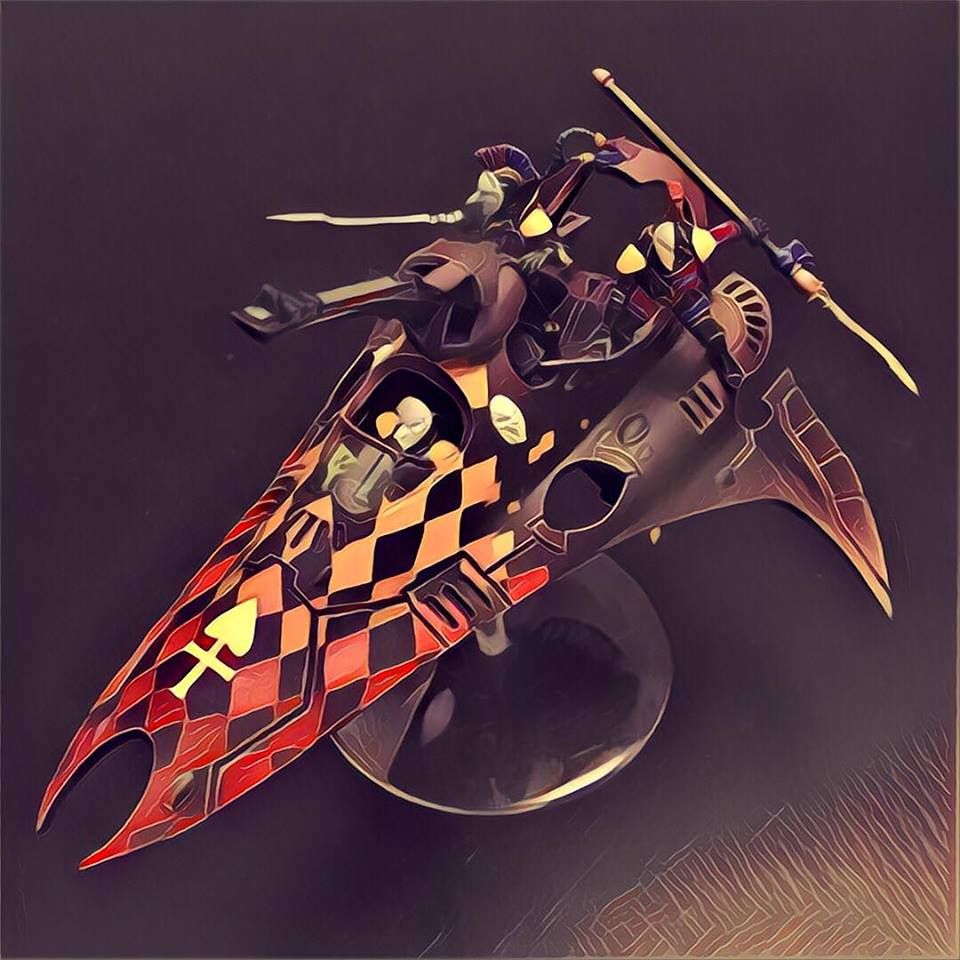 Zyekian here to bring you the rules scoop on the Harlequin side of the Death Masque boxed set.

Podcast reviews have come and gone with barely a mention of the Laughing God half of this thing so let’s get to work! And as always, check out the Frontline Gaming Tactics Corder for more advice and strategery on how to make your army hum. 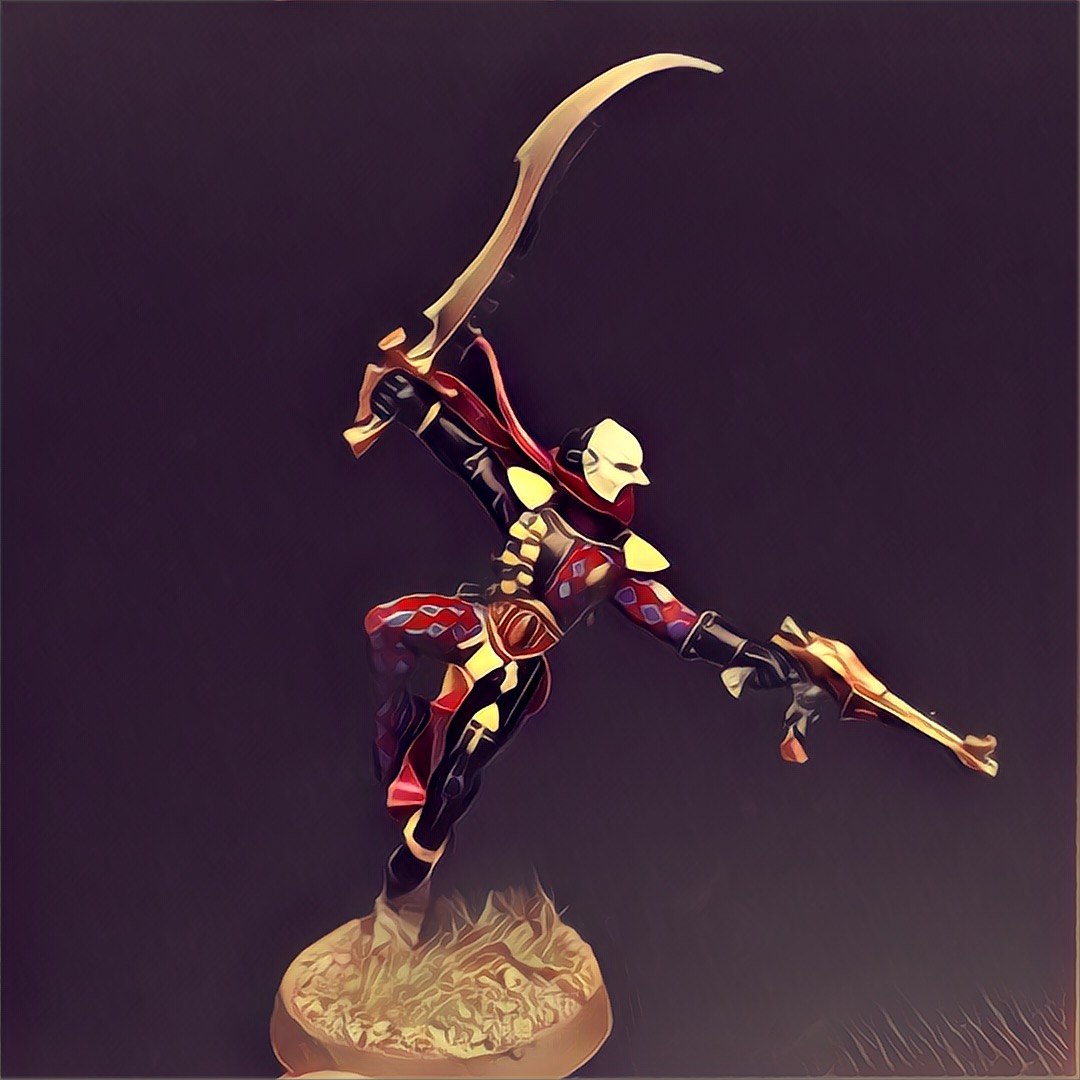 So what do we have here after grinding the Deathwatch side of the book through a paper shredder?  The Harlequin content begins with a data slate for Eldrad with no changes (booo! hiss!), then goes on to provide us with five (unique) alternate ‘slates for existing Harlequin models, plus one new formation.  This allows GW to pack in more units to the rather lean Harlequin codex without having to produce new sculpts.  It would have been nice to get additional physical models; this is a codex supplement on a shoestring budget.  Harley players will take their love where they can get it though so let’s see what’s included…

Death’s Companions are an alternate Troupe, able to be used wherever Troupes are used in a Harlequin detachment.  Their special ability, The Red Dusk Falls, is the ability to run and charge in any turn instead of beginning on turn two like in Masque and Revenge detachments.  I’m not sure why all Harlequins can’t do this but at least it’s an option now.

The Companions are a solid deal for 135 points – in fact building a conventional troupe with the same kit costs +11 more points.  There are two drawbacks though: one, it prescribes wargear for each model, thereby making the unit somewhat inflexible.

The second drawback here is this clown named Dusk.  He’s a stand-in for the otherwise excellent Troupe Master but is actually nothing more than a stock player with two wounds.  This means no haywire grenades and lesser prowess in challenges.  Ouch. The rest of the Companions are pretty geared up though, so perhaps they can compensate.  Note also that this unit doesn’t come with an option to purchase a Starweaver transport so you’ll have to spend a slot to get one.  And you’ll want to get one since running this unit on foot not only makes it incredibly vulnerable to shooting, it severly hinders the possibility of a turn one charge (which is the whole point).  This generally isn’t a problem but restricts slots in an already tight codex even more.

I think it’s probably worth it to use Death’s Companions in an army if nothing else than to make opponents deploy differently and tinker with their target priority, scouting, and infiltrating.  It’s a tool in the toolbox.

Company of the Threefold Stranger

Formations like this one make me think Games Workshop doesn’t play its own game.  This is another alternate Troupe unit so let’s go through it’s prescribed kit-out for 155 points:

This is five points cheaper than a conventional Troupe with the same build and comes with the Red Moon Rises special rule which is effectively Eldar battle focus.  The reason this makes little sense is of course because Harlequins need to get into close combat, not shoot and scoot.  Plus this unit’s shooting isn’t even that good.  Neuro Disruptors are impressive for pistols with Fleshbane and AP2, however their low volume of fire and BS4 means the unit is unlikely to kill much.  The Crescendo Pistol relic would be useful here to make the Troupe Master rattle off a few more shots but overall potential is limited.  And like the previous unit, the Company will require extra hassle to get into a transport.

So is it worth it?  You save five points over a Troupe and perhaps battle focus will be useful once in a while, so there’s a marginal argument here.  The issue is the overall cost inflation for the Disruptors and the Prince’s power sword.  It’s just a sub-optimal layout and I think the negatives exceed the positive on net. 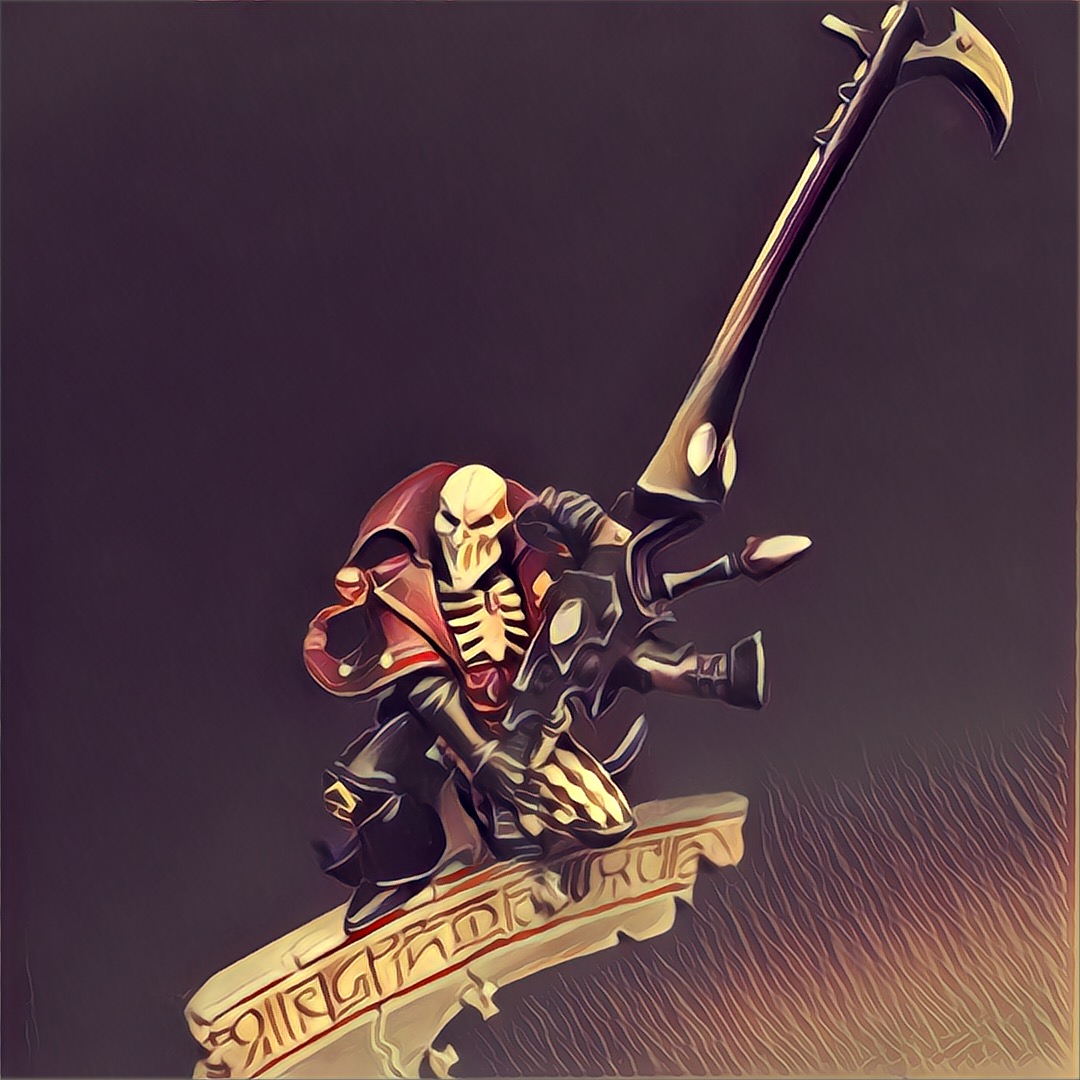 The Spectre is a Death Jester with shrouded and haywire grenades for only +10 points, essentially five points for shrouded.  Sadly it’s a unique unit because it really feels like how Jesters should have been from the start.  Put this guy in ruins and shoot at whatever isn’t fearless, taking a 2+ cover save/5++ while holding an objective and you’re in business.  Clever players will sometimes run their Jesters aggressively along side their Troupe/Solitaire rush as a sacrifice, triggering some of the nastier overwatches in the game right now.  With a 2+ save assaulting out of cover he might not be such a sacrifice anymore.  Importantly, he can join a Troupe to grant the unit shrouding without the unit having to tinker with psychic defense.  Highly recommended.

The Blades of Fate

The Blades are a unit of exactly two Skyweaver Jetbikes that re-roll jinks.  Both have the Zephyrglaive weapon that you were going to get anyway, which is S5, AP2 on the charge with four WS5 attacks each.  Both have shuriken cannons.

The Blades of Fate differ from the other alternate Harlequin units in that there’s no cost savings here, rather you’re paying +5 points for the jink re-roll.  And that’s a small price to pay since it makes them better at holding objectives and most importantly, minimizing pain from overwatch.  Harlequin players can use Blades in to soak overwatch for their more vulnerable Troupes to get in unhindered.  The Faolchu’s Blade formation in the Codex grants jink rerolls as well but at the cost of not only a second unit of bikes but a lackluster Void Weaver as well.  We finally have a unit that increases flexibility rather than the opposite.

The lack of assault grenades remains an issue, but overall the Blades of Fate represent a substantial increase in the usefulness of Skyweavers.  Recommended.

It’s a Void Weaver with Prism Cannon buffed to BS5 for +10 points.  At best it’s a lateral move since Void Weavers are so mediocre.  The third gun facing aft still has to snap fire because it’s the third gun.  I asked GW to FAQ it because come on… and they told me to play it as-written.

The whole Void Weaver fiasco feels like such a lost opportunity for GW to do something fun and interesting with the slot.  They had the chance to have another go at it in this book by giving the Prism Cannon maybe the blind special rule. GW chose to phone it in though with a lazy BS point, so here we are.

Handy for new players getting into the hobby with this boxed set, the entire Harlequin force can be played as a single formation.

Eldrad gets Eternal Warrior and the entire formation gains a super Feel no Pain on a 6+ that can be rolled no matter what on an unsaved wound.  Played alone the formation is borderline unplayable due to the two walking Troupes being bolter bait, though Eldrad’s ability to give D3 units Scout does mitigate that somewhat.  In larger lists where they can get a ride there’s more potential but ultimately not a lot here.

GRADE: N/A as a starter formation.  In a larger list it’s probably a ‘B’ with a bit of upside if Eldrad gets the right powers. 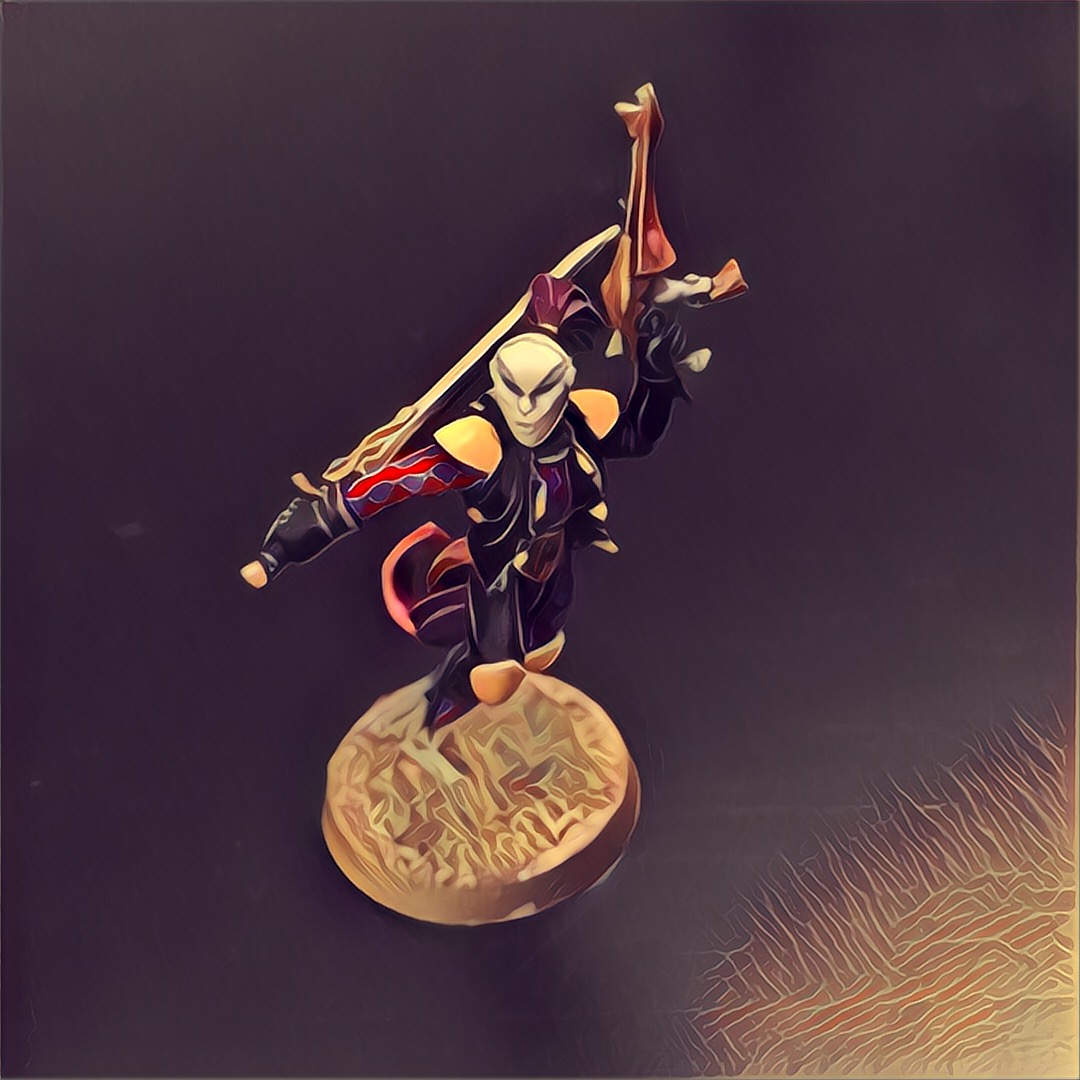 I’ll keep saying it – Harlequins are a blast to play in a semi-competitive format and a very rewarding one to play in a competitive one.  While it would have been nice if the Death Masque book took a few more risks with the content, it does add a series of buffs and tools to expand on what the army can do.  There’s never been a better time to start a Harlequin army since Death Masque is such a good deal – and let’s face it, there are a bunch of players out there looking to sell the non-Mon’Keigh half of the box off at an even deeper discount.  Try them out, you’ll thank me soon enough… or possibly curse me.  Either way I’ll be laughing.

FLG sells Death Masque and other GW products at up to 25% off MSRP. Click on the picture for more details!

Author: Pablo Martinez
Warhammer 40k analyst, tournament reporter and Ultramarines enthusiast, I'm the man behind the 40K podcast: Signals From the Frontline. I seek to gather more knowledge about the Warhammer 40k and share it to unite both hobbyists and gamers. I began writing for BoLS in 2016.
Advertisement
Harlequins Review Rules Warhammer 40k
Advertisement