The classic board game gets a spectacular re-vamp.

Siege of the Citadel was designed by Richard Borg and published in the 1990s by Target Games and Pressman Toys. It one of the first games of its kind to offer character development and the unique rotating Dark Legion player within a co-op setting. It was a worldwide hit that expanded into card games, miniatures games, comic books, two titles for Nintendo, a movie, and the latest wave of RPG adventures from Modiphius.

This new edition has original creator Richard Borg teaming up with Eric M. Lang and Kevin Wilson to produce a balanced and updates set of rules. Joining them are an  A-list team of designers that have created detailed miniatures and game tiles.

Set in the Mutant Chronicles universe, the story takes players on a full-throttle dieselpunk sci-fi ride through a solar system beset by corporate intrigue and the invasion of a terrible dark alien force. With technology failing due to the insidious effects of the Dark Symmetry, humankind must fight back against the Dark Legion hordes while dealing with mutiny and conspiracy within. Mutant Chronicles: Siege of the Citadel takes place during one of the great wars against the Dark Legion as humanity musters the greatest army under Cardinal Durand and the DoomTroopers of the Cartel to assault Alakhai’s terrifying Citadel. “The making of Mutant Chronicles: Siege of the Citadel has brought together an amazing line-up of A-list designers who were chomping at the bit to create a second edition of this fan-favorite game,” says Modiphius’ publishing director Chris Birch. “We can’t wait to bring this classic game to a new generation of gamers.” 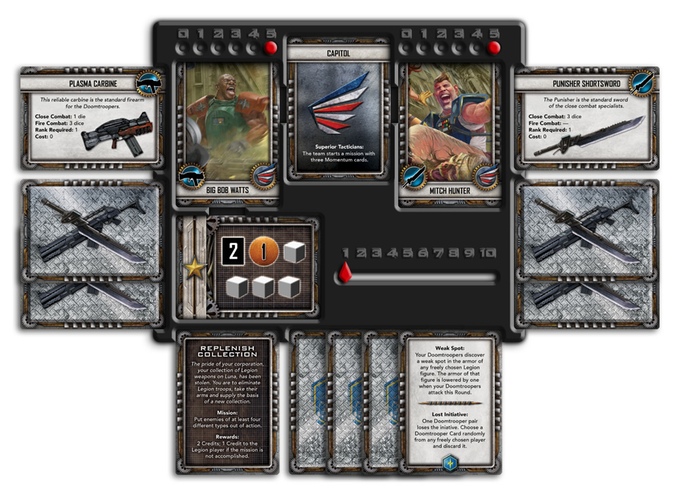