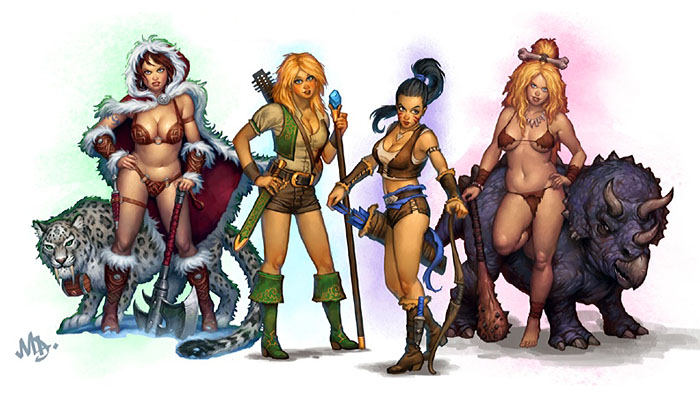 There’s a ton of cool miniature Kickstarters going on right now, and I decided to highlight a good chunk of them in this special miniatures-only Tabletop Crowdfunding Round-Up. Regardless of if you are looking for proxies for your armies, new encounters for RPG night, a new game system to dabble in, or just a cool mini to paint, you are bound to find something you like below. 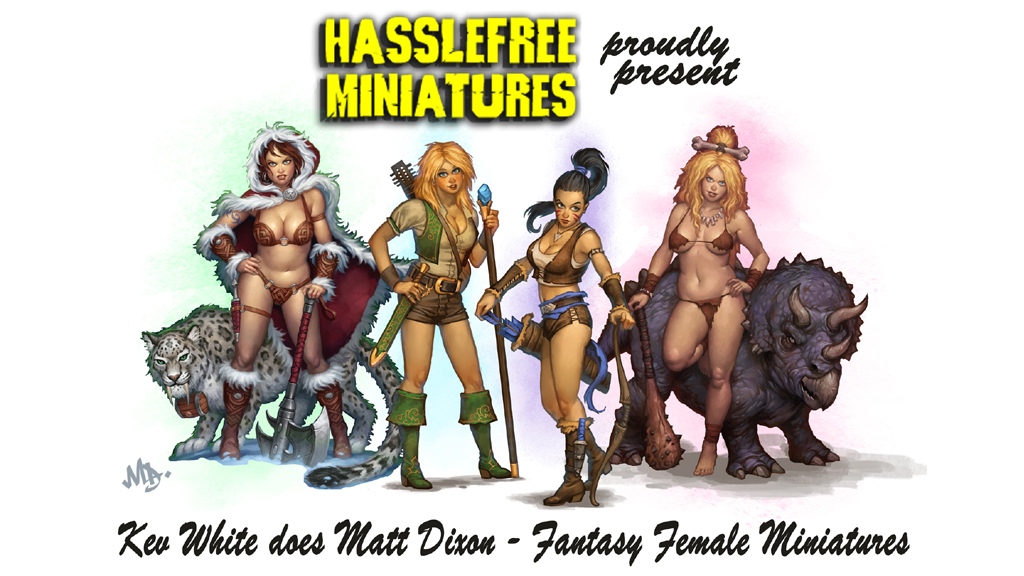 Hasslefree has joined forces with pin-up artist Matt Dixon (as well as guest sculptors Tre Manor and Fancagne Didier) for the miniature company’s first Kickstarter campaign. This campaign seeks to fund a range of saucy 30mm female miniatures based on artwork by Matt Dixon. Each miniature comes in three different variants, including the especially NSFW nude versions. The miniatures will cost you £5 each in metal or £15 in resin, with discounted bundles for bulk purchases. You can also grab various Matt Dixon merchandise as part of the campaign. 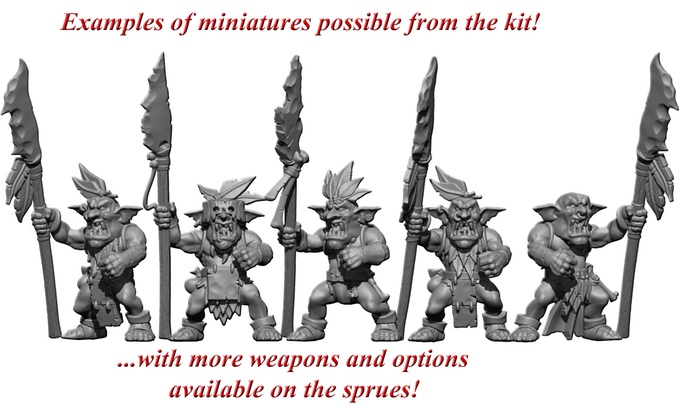 Shieldwolf Miniatures is back on Kickstarter, and this time they brought a horde of 28mm goblins to expand their growing line of miniatures. The campaign is specifically focused on their upcoming boxes of fully customizable hard plastic goblin infantry, with cavalry and monstrous creatures as stretch goals. The basic pledge level is $50 and includes 50 goblins, a goblin hero, and a goblin shaman. There are some mixed bundles available that include orcs to add some brute force to your greenskin horde. 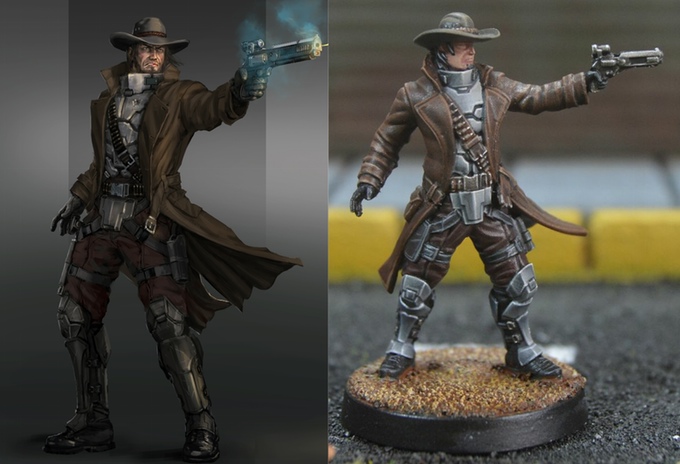 Icarus Miniatures have been working on their flagship sci-fi skirmish game The Icarus Project for a few years now, and have taken to Kickstarter to help fund production of the starter boxes for their Nexus and Alliance factions. Each starter includes 5 35mm resin miniatures for £28/$37, or £55/$73 for both. The rules are still in beta and available for free on their website if you want to check the game out.

Cult of Blood by Atlas Miniatures 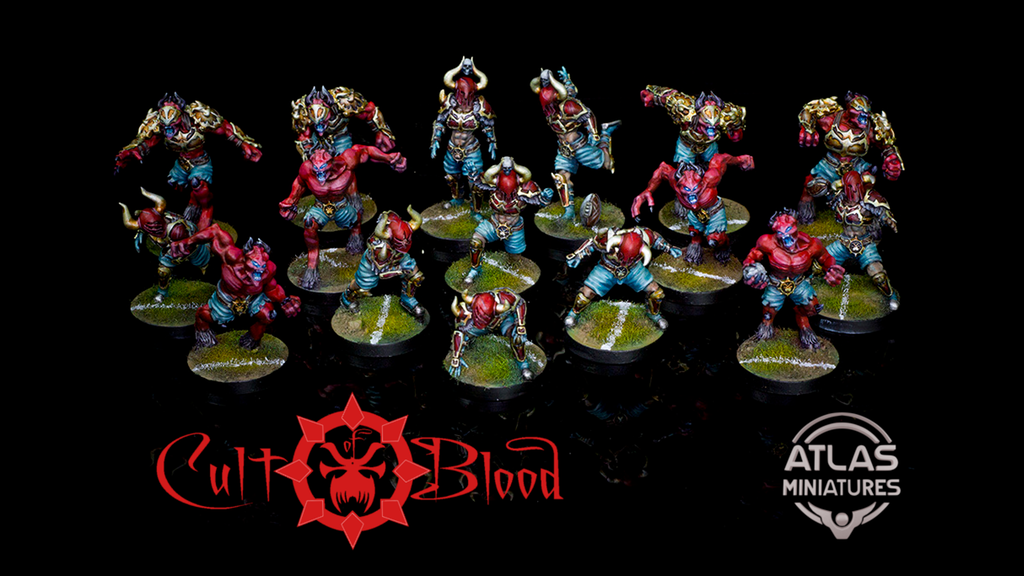 It seems like we can’t go a week without some new fantasy football teams on Kickstarter or IndieGoGo. The latest team seeking your crowdfunding dollars is the demonic Cult of Blood from Atlas Miniatures. You can buy the entire team of 17 resin miniatures for €80/$90, with a few custom counters included in each bundle.

Song of Blades: Axe and Brimstone by Ganesha Games 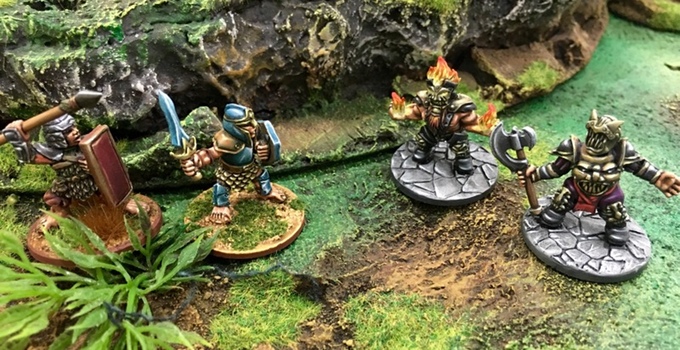 The Axe and Brimstone campaign is looking to fund two new warbands and a narrative campaign supplement for the Advanced Song of Blades and Heroes game system. This rules set is designed to allow gamers to play fantasy skirmishes at any scale, with an open-ended point system so you can create stats for miniatures you already own. The two 28mm warbands on offer include some halfling militia and the possessed dwarves looking to loot and pillage their lands. You can buy a warband for $30, which also includes a PDF of the Axe and Brimstone narrative campaign. For $80 you can get both warbands, a 3×3 play mat, and the full Advanced Song of Blades and Heroes rules.

Speaking of fantasy skirmish games involving pint-sized races, Shortwars has come to Kickstarter to promote the game and get the funds needed to produce new factions. This skirmish game uses small bands of 28mm miniatures, and the current rules are completely free to download. The two armies currently sculpted are halflings and goblins, with a few resin ogres and trolls to provide heavy support. The pledge levels are too numerous to list, and range anywhere from a single model, up to one of each Shortwars miniature.

RBJ has returned to Kickstarter to expand their line of sci-fi troopers and Terminator-esque killer robots sculpted by Bobby Jackson. For $80 you can grab all the brand new sculpts, which amounts to 18 miniatures plus any freebies and unlocked stretch goals. You can get the entire S.T.A.R. line of 38 metal miniatures and tons of bits for $226.

Masters of the Deep by Rivals 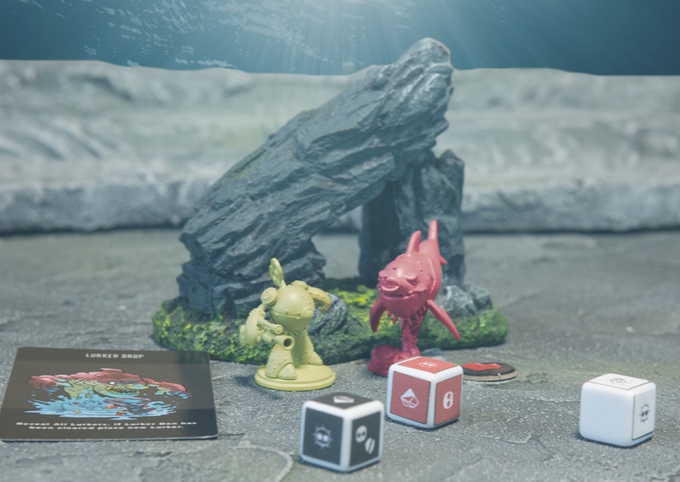 Finally we come to the latest Kickstarter for Rivals’ Lurk line of games and miniatures. They successfully funded the board game version of this new undersea minis franchise some time back, and now they are working on the rulebook for the tabletop war game. The game currently has around 55 miniatures divided amongst 4 factions, with various hostile sea monsters that act as hazards on the game board. You can buy all the miniatures and the rulebook for only $100.

Not satisfied? You can find even more cool miniatures in these additional Kickstarters:

A campaign by Wally Harwood to bring a bunch of old Tengu Miniatures back into production.

Which of these campaigns are you backing?