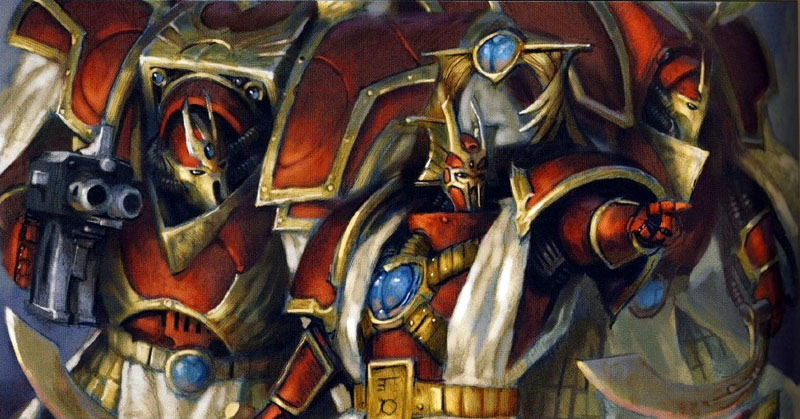 Today Loremasters we delve into the five sorcerer cults of the lords of Prospero – the Thousand Sons.

During the Great Crusade the Thousand Sons legion was highly unusual in that it could be described as almost a legion of psykers. While some marines of the 9 Fellowships (Companies) that made up the legion by the close of the Crusade had little or no psychic ability, many possessed immense power. This power was harnessed and developed by the legion cults.

There were five cults in total, their membership being irrespective of Fellowship or other organisational distinction and based solely upon an individual’s chief psychic talent. Each Fellowship was therefore made up of marines from all the cults, although some cults did tend to dominate certain Fellowships. Each cult had a pyramidal headquarters in Tizca, where knowledge specific to the cult’s area of expertise was kept and relevant training was carried out, as well as their own insignia, displayed upon their armour on the shoulder guards, within the centre area formed by the nature of the Legion’s ‘serpentine/starred circle’ symbol.

The five cults represented the different aspects of psychic powers employed by the Thousand Sons, and each specialised in one particular area of psychic mastery. They were founded by the nine original members of Magnus the Red’s innermost cabal, who between them had variously spontaneously developed the five distinct abilities of psychic power that would form the basis of the cult system. Each cult developed a hierarchy, with the cult leader being known as the Magister Templi. Two ranks are placed higher than this, that of Magus and Ipissimus. The Magus, master of all the cults, was Magnus the Red. And while not actually a member of the Thousand Sons cult system, the position of Ipissimus was created to represent the Emperor, the perfect being.

It is currently unknown what happened to the Cults of the Thousand Sons in the aftermath of the Horus Heresy. It should be noted that Ahriman (very powerful in Corvidae abilities but severely lacking in all others) instinctively drew on the powers of the Pyrae and Pavoni to great effect within moments of arriving on the Planet of Sorcerers, much to his surprise. The implication being, organisational changes forced on them by circumstance aside, that the Thousand Sons would discard their cult system as no longer relevant.

Cult of the Corvidae

The Corvidae’s specialty was precognition; the ability to see into the future. Their purpose was guide the Legion along it’s path in conflict and overall philosophical development. Specific battlefield applications of this power included not only foreknowledge of enemy strategy, but direct knowledge of events just about to happen; this would allow a member of the Corvidae to move safely though an incoming barrage or execute precision gunfire in the most complex of circumstances.

The symbol of the Corvidae was that of a black raven’s head.

The Pyrae are pyrokinetic, able to both generate and control fire. Their powers can also be used to make them effectively immune to pain or injury caused by fire. They can project the fire they generate in many ways, principally as variations of shields or projectiles. The temperature and lethality of flame can be controlled; as it is warp-powered, Pyrae fire can become exceedingly lethal to not only anything it alights to, but also anything in the immediate vicinity of the flames. Pyrae teachings also seemed to include the ability to control and manipulate automata, such as Robots and even Titans.

Their pyramid on Tizca was topped by an constantly burning finial. The front gate of the pyramid was not surmounted by a golden statue of their cult symbol, like the other cult pyramids, but by Canis Vertex, a powered-down Warlord Titan of Legio Astorum that had been brought back to the city by Captain Khalophis after a particularly notable campaign. The Titan would eventually be deployed in the Battle of Prospero, and perish there.

The symbol of the Pyrae was that of a scarlet phoenix.

Cult of the Pavoni

The Pavonae are apparently able to use their psychically-generated powers to manipulate body chemistry, in themselves and others. In skilled practitioners this can be displayed as both the control over one’s appearance (being able to – within reason – resculpt one’s facial features into a more pleasing cast). Another simple use known of was making oneself immune to dehydration.. Direct battlefield demonstration of Pavonae abilities tended to focus on the offensive use of lightning generated from one’s own nervous system and the ability to boil the blood of their enemies. Pavoni are also able to use their abilities in the field of healing.

Ahriman noted that members of the Pavoni tended to be the most egocentric of the Thousand Sons.

The symbol of the Pavoni was that of a colourful feather.

The Athanaeans are telepaths, able to read the thoughts of others as well as transmit their own. Athaneanans complement Corvidae in intelligence operations – while Corvidae interpret what may happen and influence strategy, Athaneans are able to discern current movements and influence immediate tactics. Athaneans also provide secure communication. Battlefield roles involve direct intelligence gathering and transmission.

The symbol of the Athanaeans was that of a open eye.

The Raptorae are telekines, trained in using their own telekinetic power as a means of both offense and defense. Offensively, Raptorae could direct physical objects at enemies, as well as simply use their powers to directly manipulate enemies; ripping parts of them off, for example. Defensively, they generate ‘kine shields’, barriers of invisible physical force that blocked attacks. Kine shields were not just generated for personal protection; Raptorae could also project this ability to shield others. The largest kine shield known to have been achieved covered the entire city of Tizca, generated from the Raptorae pyramid by a massed group of cult members. Generating such shields can be draining for the marine or marines involved, with damage inflicted on the shield eventually taking a toll: The Raptora group generating the Tizca kine shield suffered fatalities whilst resisting particularly high-yield weaponry.

The symbol of the Raptora was that of a clawed talon. 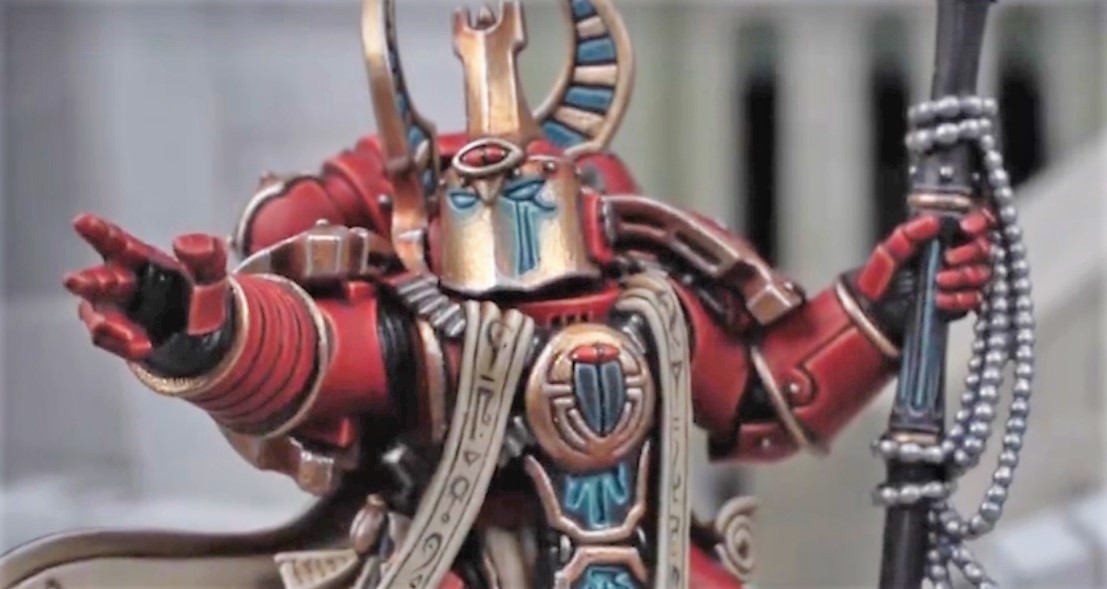