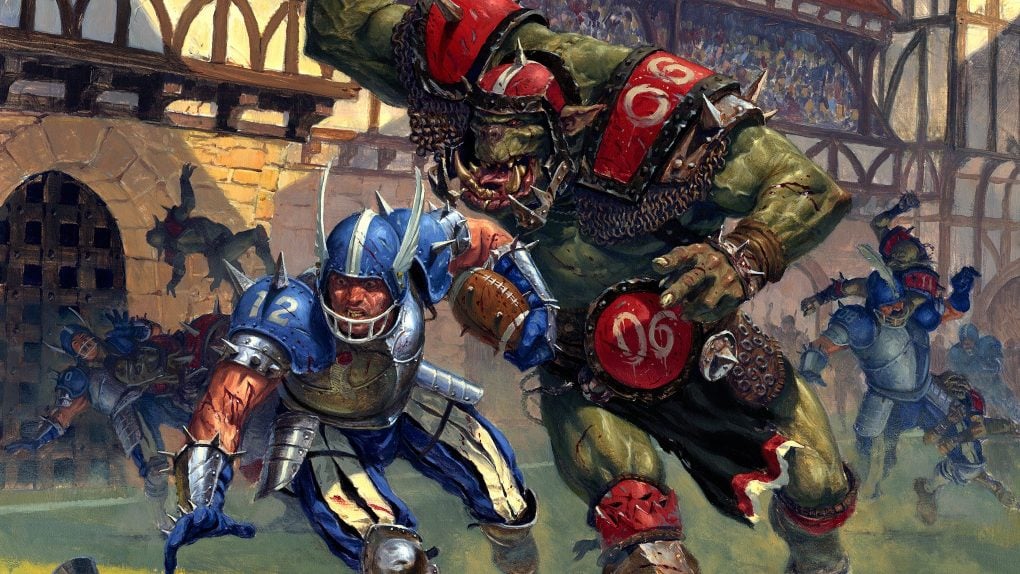 Want to learn the basics of Blood Bowl? Join us as we run down the rules!

I know lots of folks are curious about the rules for the latest edition of Blood Bowl. The good news is if you’re a vet of the game you’re in pretty good shape.

Not too much has changed! It’s still 11 players vs 11 players (at least on the field at once) and the core mechanics are pretty much the exact same. Players still have the same basic actions of Move, Block, Blitz and Pass. Picking-up the football off the ground still requires a check but you just have to move onto the square. Tackle Zones are still the 8 Squares adjacent to a player and they only “threaten” those zones if they are standing – prone players (or stunned) don’t count.

The Dice Rolls for the Block Dice are pretty much the exact same: 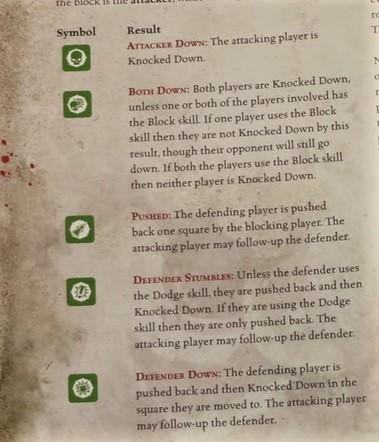 So Vets, you really don’t have too much to worry about. There are a lot of “advanced rules” in the book that I do skip over but I’m pretty sure you vets will be happy with the majority of those changes.

For anyone that’s new let me break down the rules a bit more.

Move – This is your basic movement action. It allows a player to move up to their move value. If you move through any opposing player tackle zones you have to make a dodge roll.

Blitz – This is a special action that can only happen once per turn. It allows players to move and throw a block at any point during their move at the cost of 1 point of movement (the block costs 1 point).

Pass – This is another special action that can only happen once per turn. A player with the ball (and the pass skill) can attempt to throw the ball to a square or another player. If the ball is accurate (meaning you passed your Passing Roll) then it lands accurately. If the pass is failed, the ball will bounce.

*Catching – This isn’t really an action so much as a result of a Pass. If a player is in the target square of a Pass they can attempt to catch it. It’s a agility roll with some modifiers. If they succeed, they get to take possession of the ball. If they fail the ball goes bouncing.

There aren’t a lot of other rules to think about, but things like fumbles, falling down, turnovers and the like are still in the game. We cover most of that in the video above. 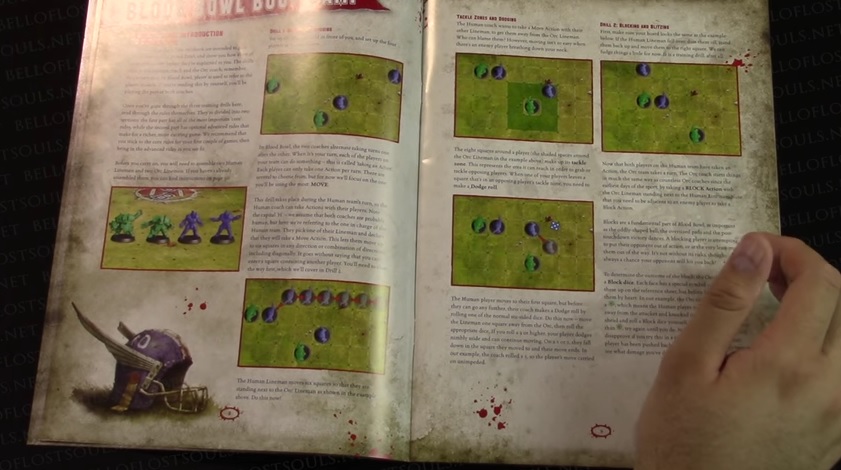 It even has a “Training Camp” section to take you from complete newbie to ready-to-play in a few minutes.

Overall, I think that this edition of Blood Bowl is a great re-introduction to a classic game. The models are fantastic. The Rules are pretty clear (as long as you remember them) and it’s a brutal, fun “Fantasy Football” game. So give it a shot when it comes out!

I can’t wait to get some more games under my belt!

Quick Note – I did perform an illegal procedure in the demo. I committed a second Blitz which you’re not suppose to do. My bad – I’m just trying to show of the core mechanics.