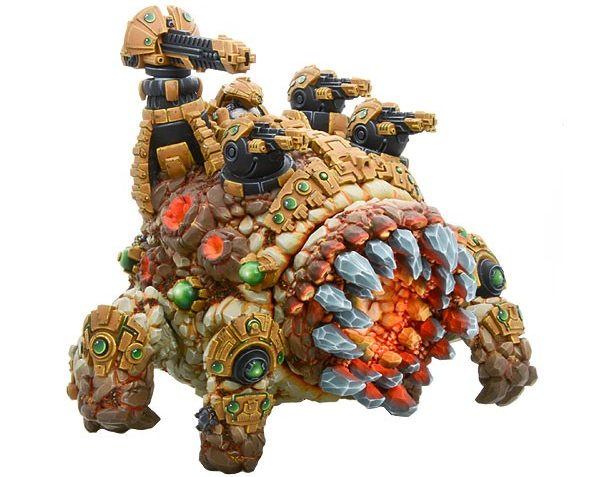 Pre-order the largest Gates of Antares model to date!

Terrify your foes on the tabletop with the newest addition to Boromite forces: the Matronite Brood Mother. It’s the first large creature to be added to the game – the model has a lot of detail, and packs some heavy duty firepower. Take a look…

The Brood Mother – or Matronite to give the creature its proper name – is the largest and most extraordinary Lavan species of them all. Yet it begins life as a hatchling quite indistinguishable from its siblings, and it is only its extraordinary capacity for growth than comes to mark it out as a species of a vast and diﬀerent kind.

These creatures are an extreme physical morph that evolved to live with in the Borom asteriod belt. With the ability to survive in harsher environments they make a perfect platform for heavy weapons, carving out ﬁghting compartments within the beast’s stony hide to carry men and weapons. Normally a placid and gentle creature, suitably powerful neural implants are used to goad the Brood Mother into a savage killer. The Brood Mother is a Humongous Beast unit and the crew’s role is simply to operate any weapons and direct the creature by means of neural implants much as if it were a vehicle. The stats are a mix of its crew’s abilities (Acc, Init and Co) and those of the creature itself. Full details can be found in Beyond the Gates of Antares rulebook on page 188. Special: A force can only include a single Brood Mother

MOD2: The Brood Mother is a multiple ­order dice unit with 2 order dice.

1 Attack SV4: In hand­-to-­hand ﬁghting a Brood Mother makes one attack with a strike value (SV) of 4.

Large: A Brood Mother is large. Yes, I know it is rather obvious, but it needs to be said none the less!