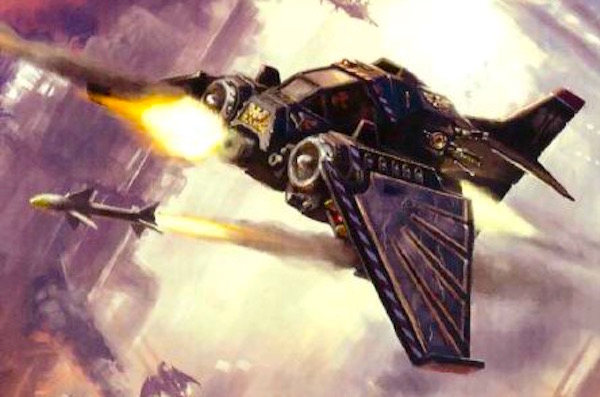 Hi everyone, today we review another of the Dark Angels’ unique flyers, the Nephilim Jetfighter.

The Nephilim Jetfighter is billed as an air superiority fighter, dealing death to enemy flyers in no short order. It comes armed with a decent array of weapons and some nice special rules to help it deal more damage, but it ultimately suffers from the same problem as the Dark Talon, it is very expensive for what it does. It comes with armour 11 all round and three hull points for 170 pts.

The Nephilim Jetfighter comes with a decent array of weaponry, which will all be fairly accurate thanks to having Strafing Run on the flyer. The Avenger Mega Bolter puts out a fair number of S6 hits, which should be able to trouble any enemy flyers or medium-armoured vehicles in the enemy army, though at AP4, it will not be troubling Marines all that often. This compliments the Twin-Linked Heavy Bolter quite well both should be able to cause a lot of damage against any unit lacking a 3+ save or better.

The Blacksword Missiles are useful for taking out tougher targets or enemy vehicles, with their slightly increased strength over the Avenger Mega Bolter, or at AP3 they can even be used to take out MEQ targets. Against ground targets, you are almost guaranteed to hit with the Missiles, as they will be hitting on a 2+ with a re-roll. Given that you can fire up to 4 missiles in one turn, you should be able to do some damage against vehicles that are AV12 or less, with the potential of glancing AV13 if you get lucky with your rolls. 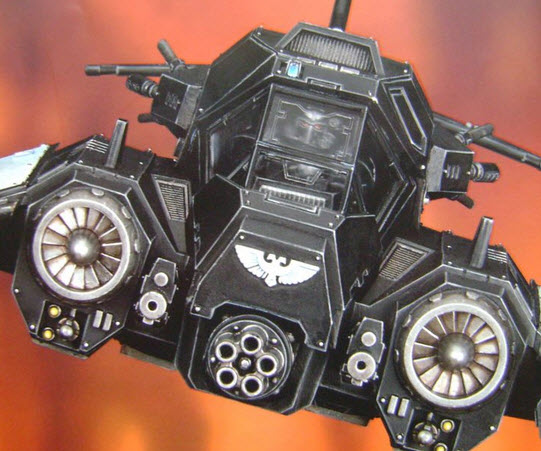 Against enemy vehicles, the Unrelenting Hunter rule comes into play. This rule gives you a 1 in 3 chance of immobilising an enemy vehicle with a penetrating hit. This can be great for stopping enemy transport vehicles in their tracks or for softening up an enemy vehicle for an assault by one of your units. Even though enemy vehicles are easier to hit in combat, there are plenty of games where your Space Marine Sergeant will simply not score a hit with his Meltabombs. An automatic hit against an Immobilised vehicle greatly increases your chances of dealing the killing blow. This can also be a nice combo with any Grav weaponry in your army, giving you the chance to deal additional damage against an already immobilised vehicle, killing most enemy vehicles with one successful grav wound.

Replacing the Avenger Mega Bolter with the Lascannon is also a good option, boosting the vehicle-hunting ability of the Ravenwing flyer. Taking this will probably mean you will be firing the Lascannon and Missiles each turn, rendering the Heavy Bolter pretty useless, but this is a fair trade off. Who knows, you may even get a lucky glancing hit against some AV11 vehicles.

The Nephilim Jetfighter is also fairly durable. As a flyer, it will already be more difficult to hit. Armour 11 all round and 3 hull points will take a bit of killing without any dedicated anti-flyer firepower in the enemy army. The Ravenwing rule also gives the flyer a 4+ re-rollable Jink save, further boosting its durability. However, as you will be snap firing next turn, this kind of wastes the potential of the Jetfighter, as you will probably not wish to risk those one shot missiles on a snap firing shot. The Nephilim Jetfigher also cannot Hover (unlike the Dark Talon), meaning it cannot be used for any late game objective grabbing.

The Nephilim can be taken as part of the Ravenwing Silence Squadron. This consists of two Nephilim Jetfighters and a Ravenwing Dark Talon. This formation gives some nice bonuses to the Dark Talon, but doesn’t really give any additional bonuses to the Nephilim Jetfighters other than allowing them to arrive from a single reserves roll. This formation features three lacklustre and expensive flyers, so is definitely not worth taking in a competitive army.

I could see the Nephilim Jetfighter having a useful role in a Ravenwing army. Generally, my all Ravenwing force suffers from a severe lack of anti-air firepower, often finding themselves at the mercy of enemy flyers and the dreaded Heldrake. The Nephilim would actually provide a useful source of anti-flyer firepower for the force, tackling enemy units that the rest of the army could not do as efficiently. The only downside is that taking the flyer as part of the Ravenwing Strike Force means starting with the whole army in reserve. Without another detachment or formation, this means auto-losing the game. In a CAD though, it can provide a nice source of anti-flyer firepower that will be potent against a range of ground targets.

I really like the model for the two Dark Angels flyers. Unfortunately, the Nephilim Jetfighter is a mediocre flyer on the tabletop. It has some decent guns and should be able to take on a number of enemy units, but it is simply too expensive for what it brings to your army. A pity though, as it really is a great model.

~What about you out there? Have you had any success with the Nephilim in your Dark Angels army? Which of the two flyers do you prefer to field? 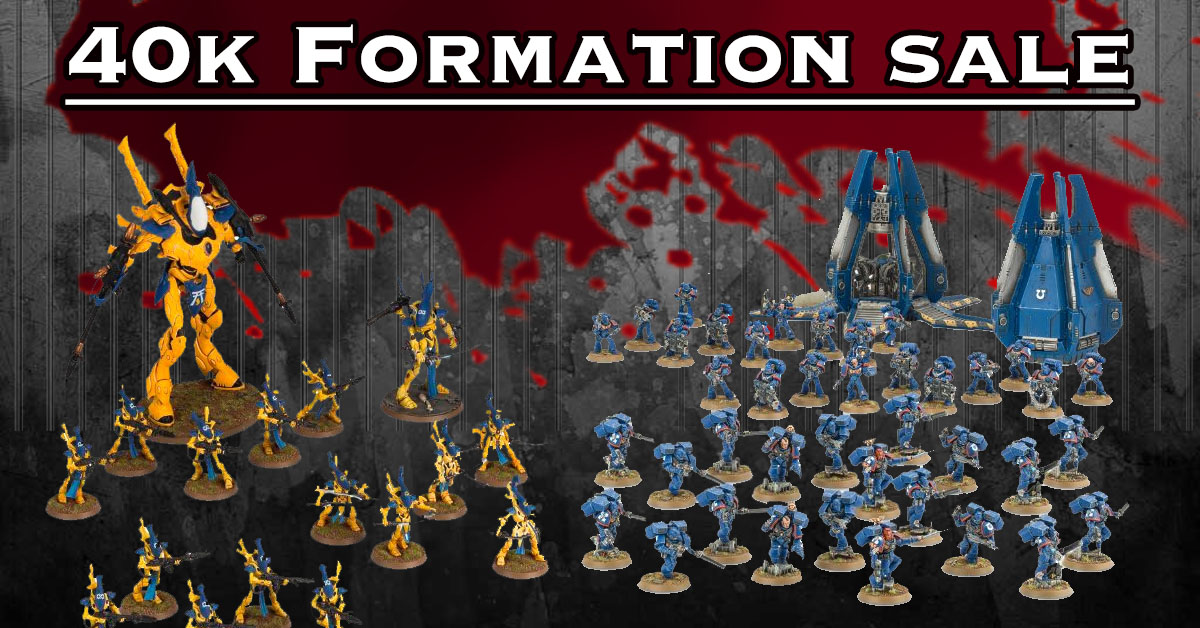 For Black Friday this year Frontlinegaming is giving you the option to buy any formation at 25% off MSRP, and with free shipping. (Some limitations will apply)