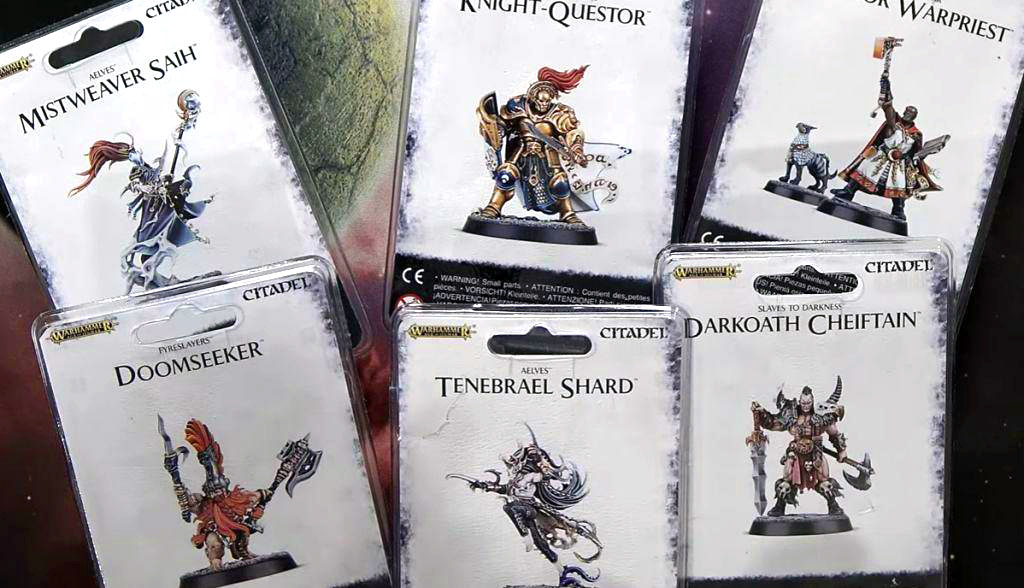 Today we are unboxing and rules for the miniatures in the Age of Sigmar: Silver Tower boxset, now sold separately.

As we all suspected, the models from the Silver Tower boxset would be released individually at some point and here they are! 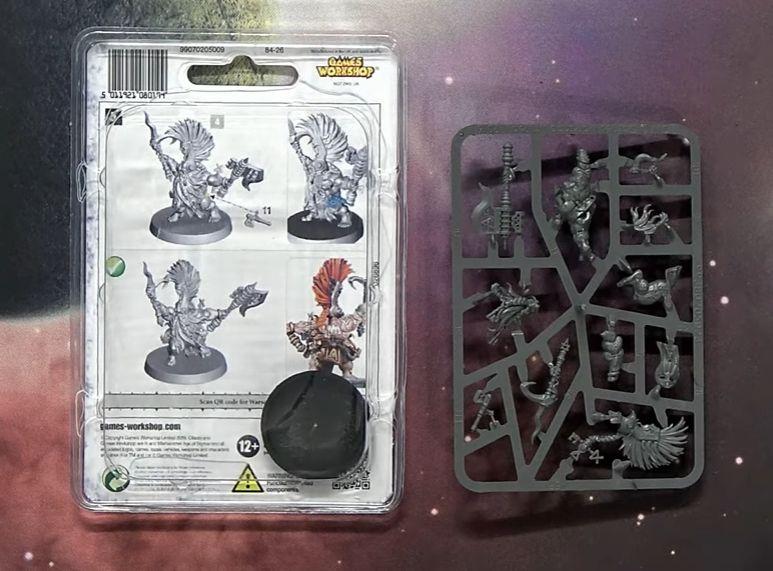 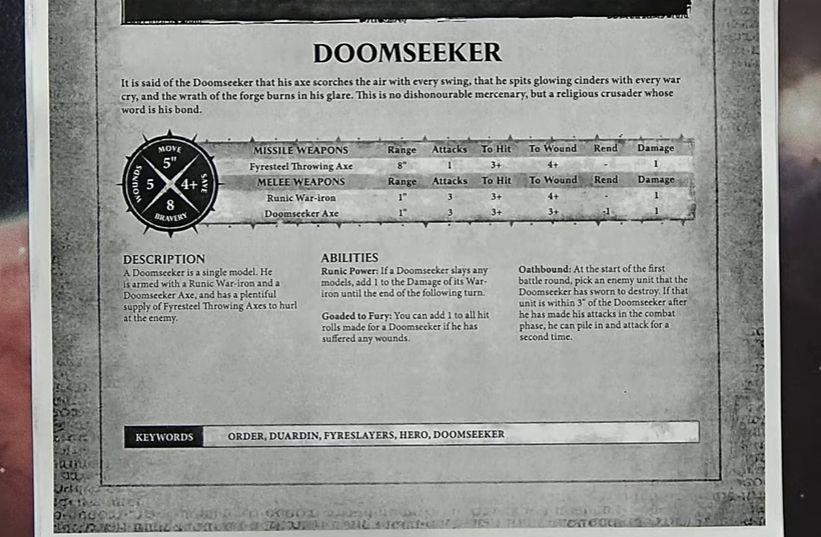 First up we are going to take a look at the Doomseeker for the Fireslayers. So here you can see that the sprue is multi part but we are unsure if these parts can be used for conversions!

The rule set for the Doomseeker can be downloaded from the Game Workshop site. His stats seem to be ok but what really makes him good are his two abilities Runic Power and Goaded to Fury.

Runic Power allows him to add 1 to the damage from Runic War-iron attacks if the Doomseeker slays any models and Goaded to Fury adds 1 to hit rolls if he has suffered any wounds. 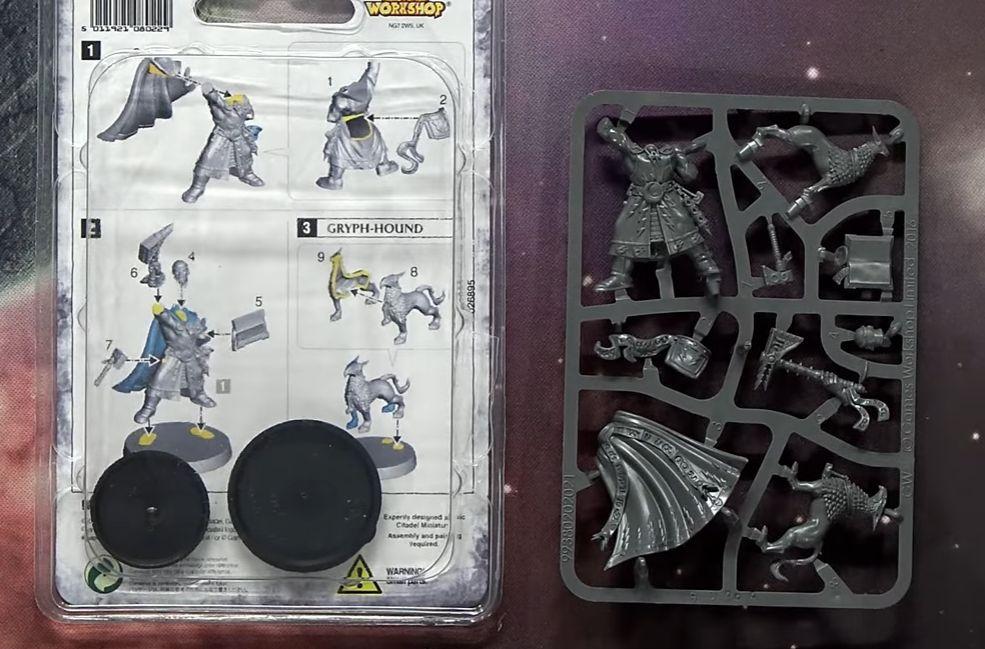 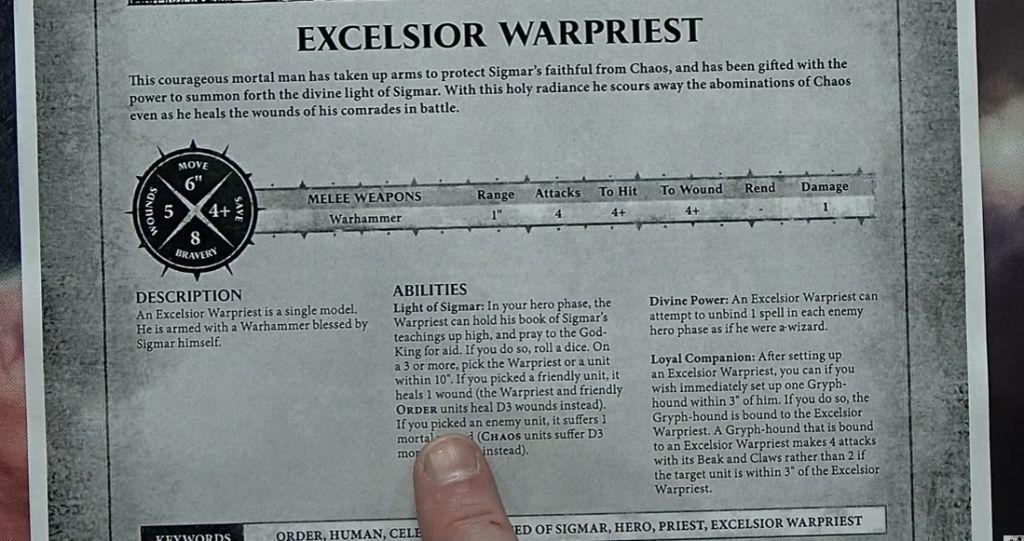 Next we will take a look at the Excelsior Warpriest for the Devoted of Sigmar. This guy appears to be more multi part than the Doomseeker since you can swap out the cape and the book. The Excelsior Warpriest seems to be a healer due to his Ability, Light of Sigmar, which allows for him to use his book of Sigmar’s teachings to heal himself or a friendly unit within 10 inches. 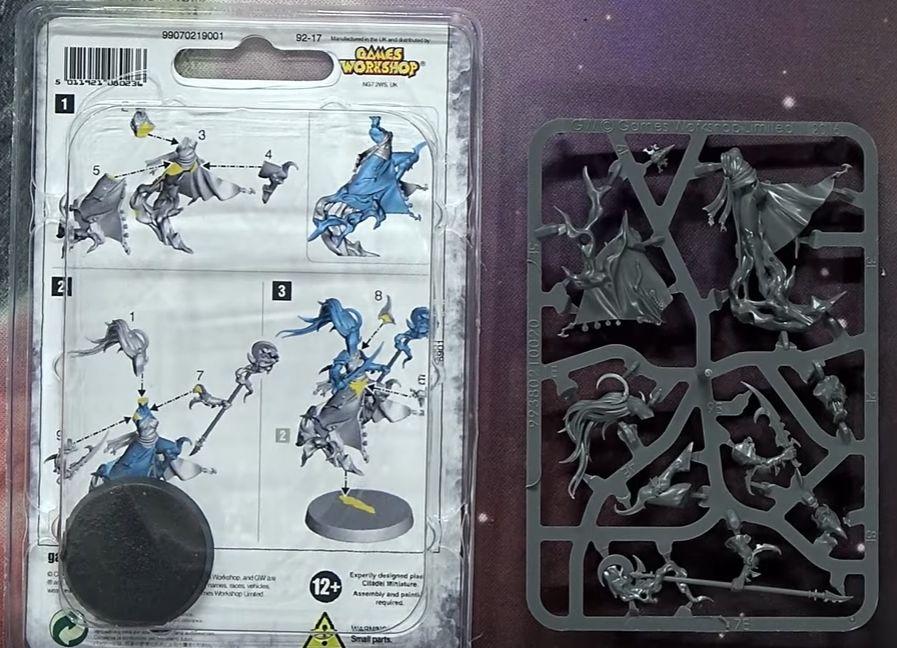 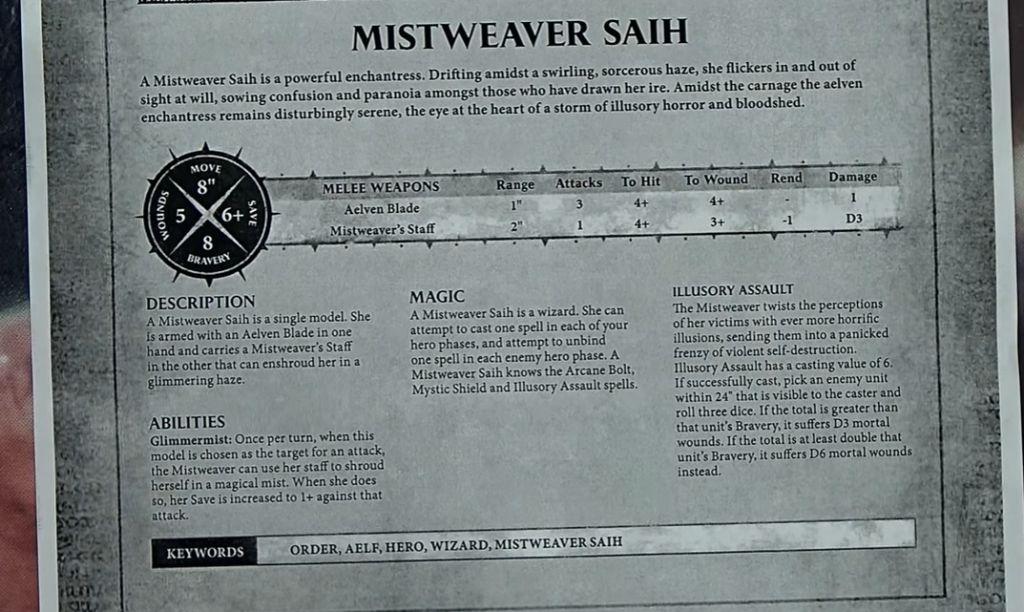 CORRECTION: Her save becomes 1+ (not +1) so she basically can save on a 2+. Way more usefully for sure. That can change a lot of things, and she may just become an auto include for some order lists. 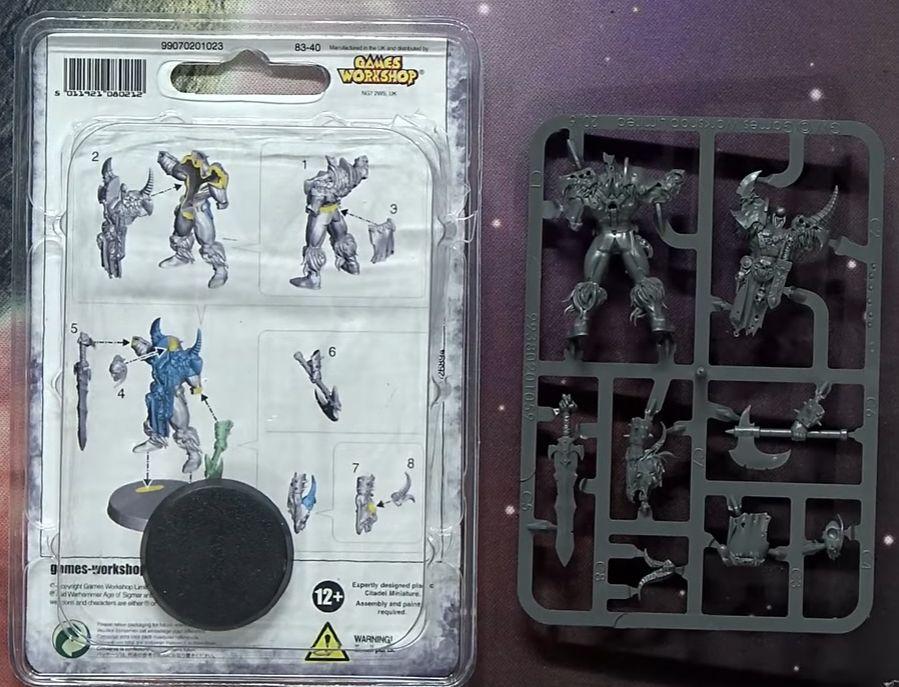 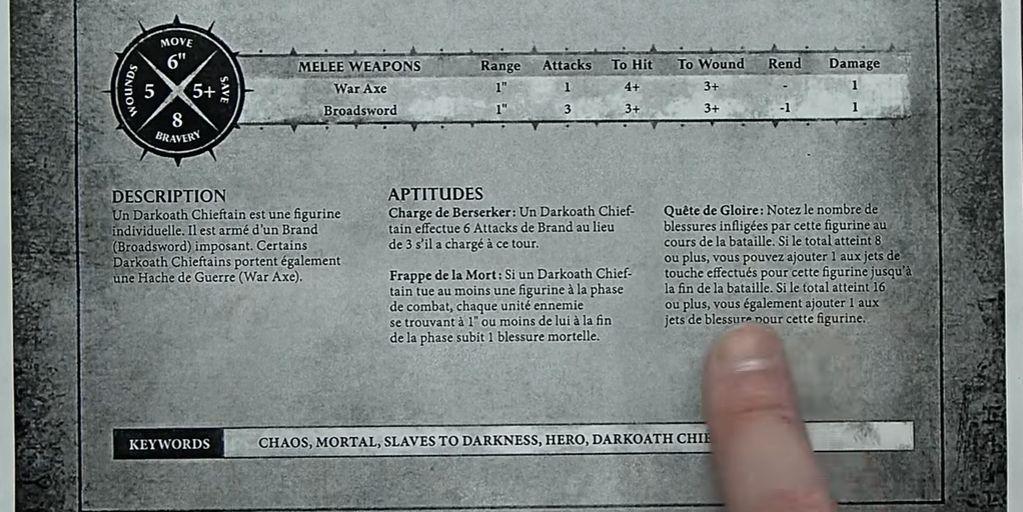 Next up is the Darkoath Cheiftain for the Slaves of Darkness. He is a very iconic looking model and seems to have a bit of a Frazetta’s art style to him so this will probably be a very popular model. The rules for this guy is all in French for some reason. No matter what language was picked, they kept coming out in French so let’s see if we can figure some of it out. The Broadsword seems to be pretty good with 3 attacks, 3+ to hit, 3+ to wound, and -1 rend. This guy seems to be a blender due to his special rules and should definitely be taken in an army. 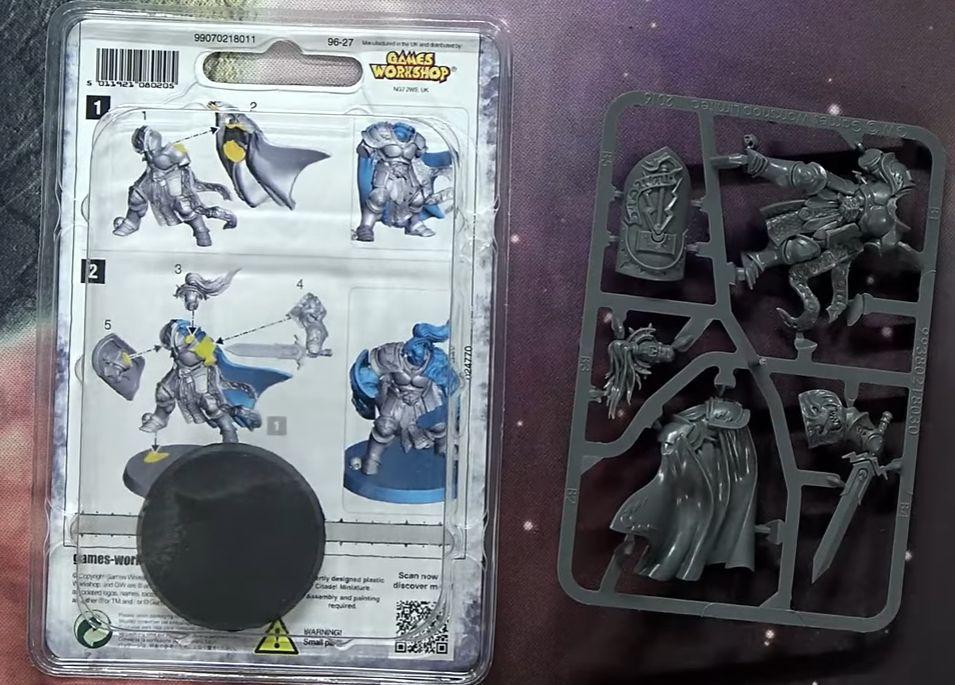 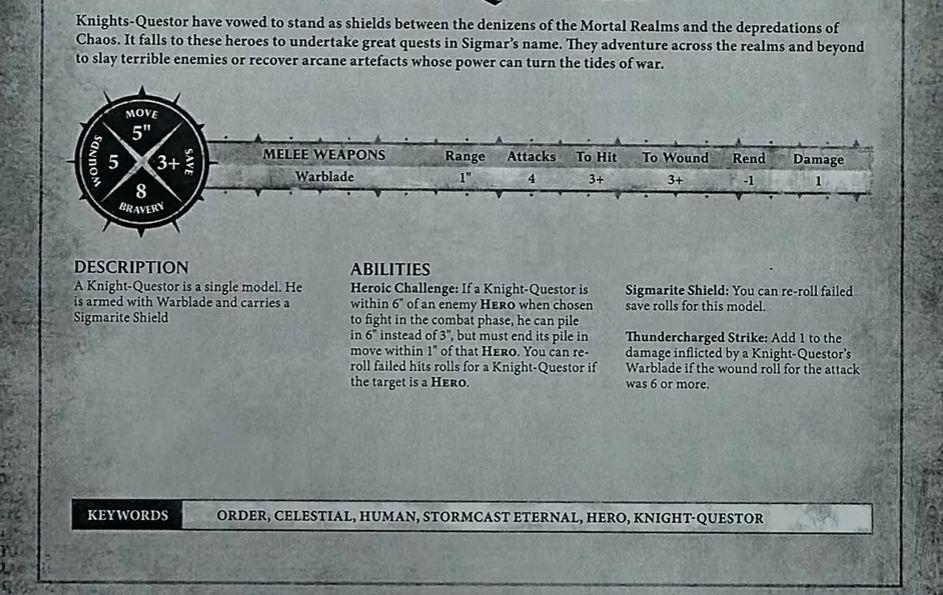 The Knight-Questor is yet another of the Sormcast Eternals. He looks pretty awesome with the cool sword and awesome shield. He could probably be added to any Stormcast Eternals army or taken as another hero if you choose to do so. His stats seem to be pretty average and his Sigmarite Shied allows for a re-roll of failed save rolls. The Heroic Challenge ability allows the Knight-Questor to pile in 6 inches instead of just three and he can also re-roll failed to him rolls if his target is a Hero. That goes great with his Sigmarite Shield and seems to provide some great stay-ability to this model. 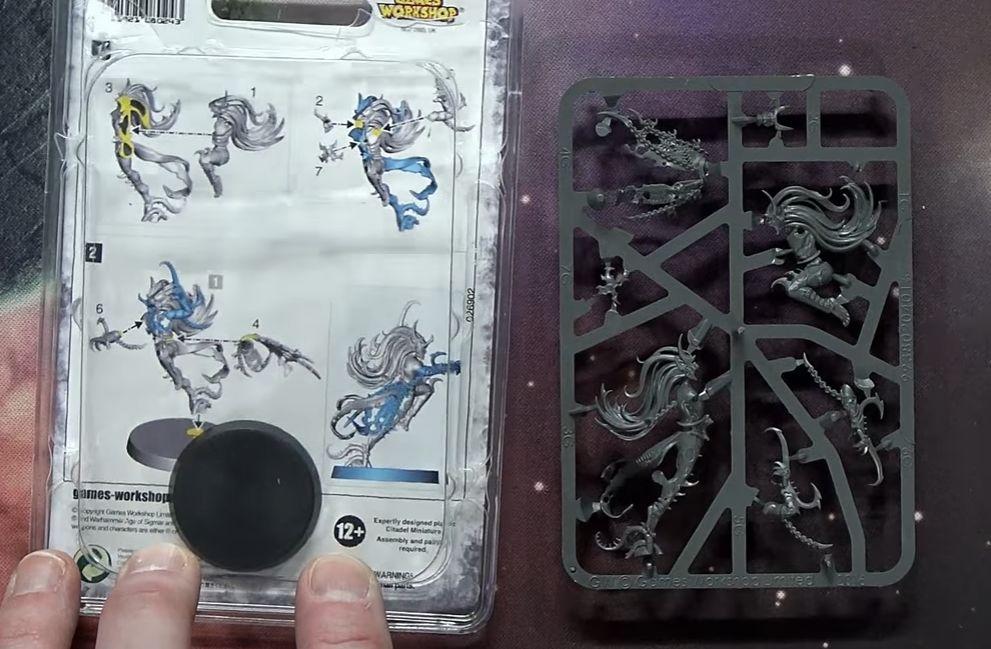 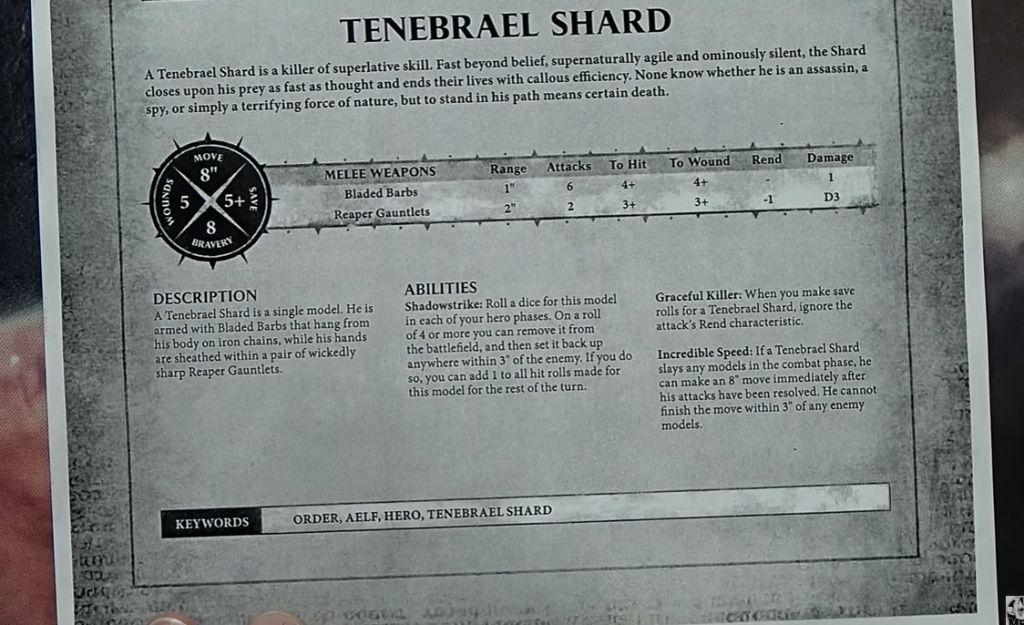 The Tenebrael Shard is an incredible sculpt with an epic stance and seems to be a blender as long as you roll a 4+ in your hero phase. The Ability Shadowstrike allows you to rill a dice on your hero phase and on a roll of 4+ you can removed it from the battlefield and place it anywhere you want that is within 3 inches of an enemy mode. If you do, add +1 to all rolls to hit for the rest of the turn.

~Head over to Games Workshop and pick up your favorite minis today!