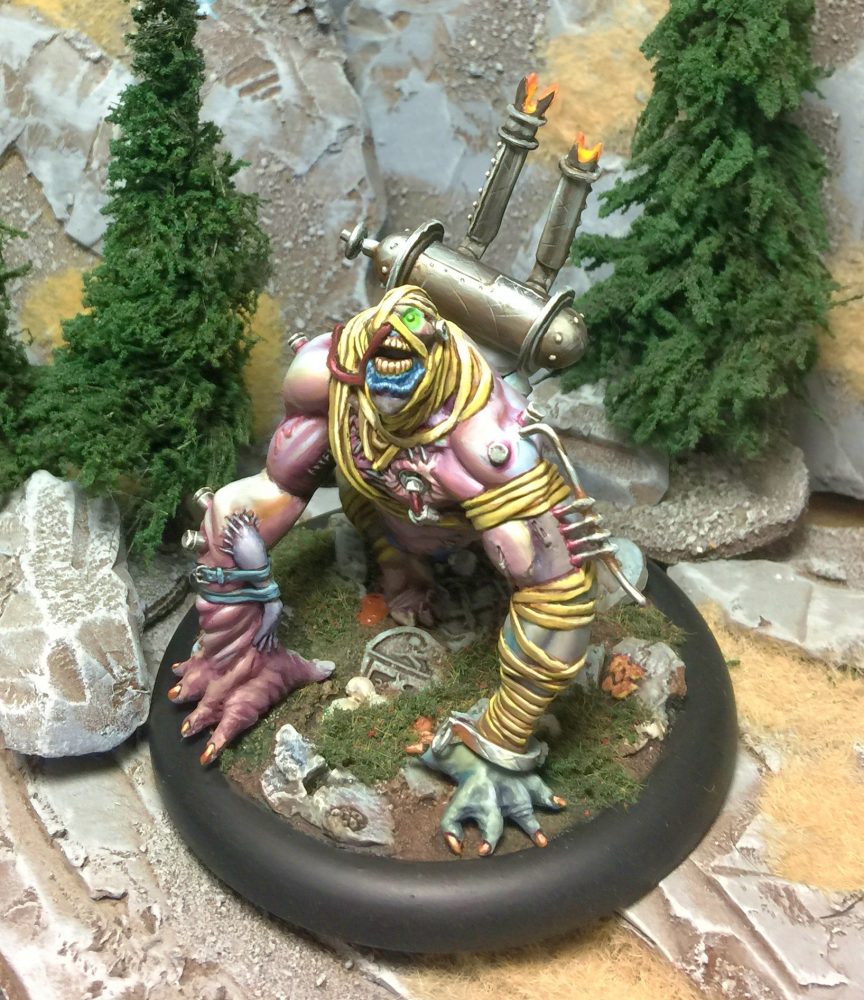 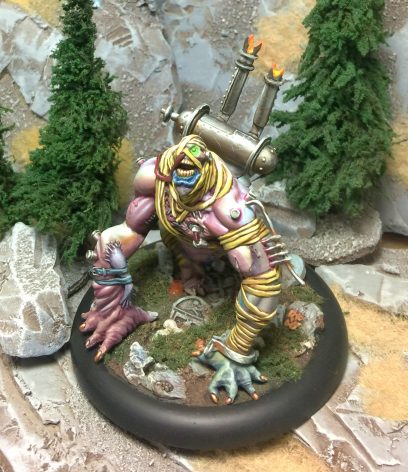 I’ve finished painting the last model for my Goritsi army. Here’s a step by step for my Blood Engine. 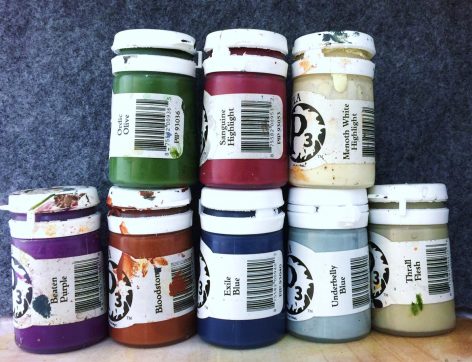 Big models like this are so much fun to paint. All the big areas make it easy to bring out those wet blending skills and go to town. Gross decaying models like this are also interesting because they let you try weird color combinations. It doesn’t matter whether it’s a zombie dragon, a Nurgle Demon, or some other monstrosity like this guy; rotten flesh tends to look best when you break out as many colors as you can. I know it sounds weird but it’s true. This veritable rainbow shown above are all the colors used just on the skin of this Blood Engine. 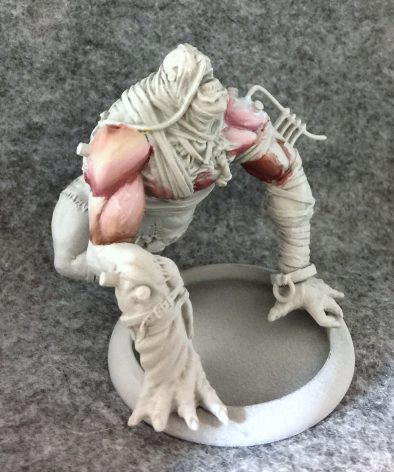 I start off with a basecoat of Beaten Purple with a bit of Bloodstone mixed in, then blend in highlights of Thrall Flesh. 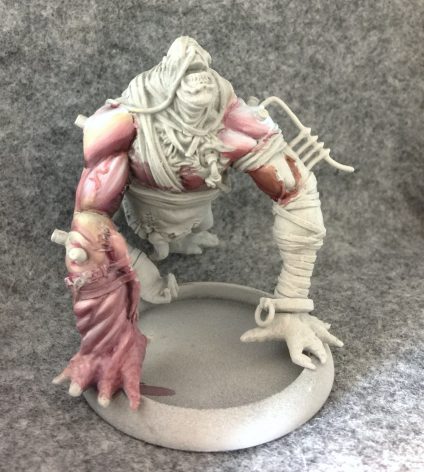 I continue with the same palette across more areas, adding some Underbelly Blue to the highlights in a few parts. 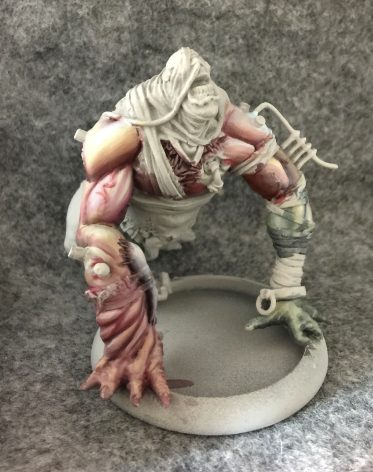 After adding some more shading to the left arm with a mix of Sanguine Highlight and Beaten purple, I move on to the right arm. This is where I start goin for some cool tones with Ordic Olive and Exile Blue mixed with a bit of Thrall Flesh. This is highlighted with more Thrall Flesh. With so much skin on this guy, its important to make sure its appearance is varied; too uniform and the model won’t be as exciting. 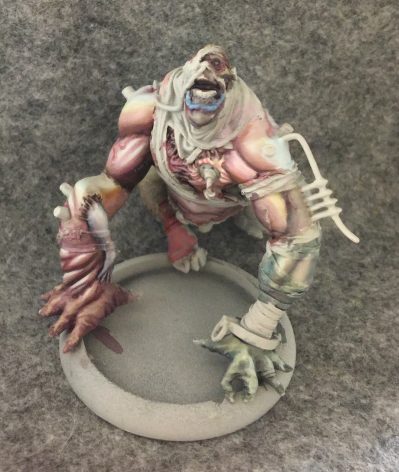 I add some final highlights to the lower right arm with Menoth highlight to give it an almost slimy look.Then I move on to the face. Since I want it to really stand out I go with a nice saturated blue (Cygnar Blue Highlight) for the lips and gums. This is a color that doesn’t feature too heavily on other areas of this model, so it should really draw the eye. 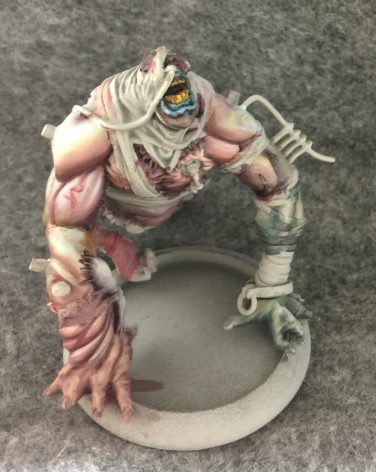 I work on cleaning up the blue of the mouth, and also start on the teeth. These are basecoated with Sulfuric Yellow, then given a wash of Agrax Earth. 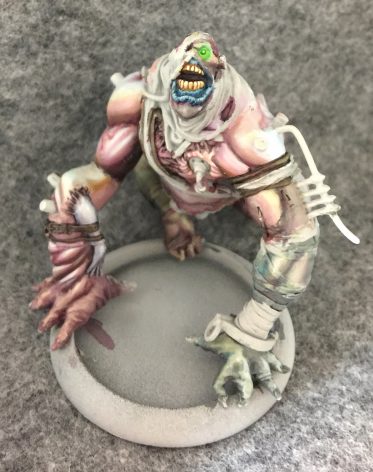 I finish off the lips by adding some little lines of frostbite to the lips to give them a wrinkled appearance. Each tooth is also picked out first with Sulfuric Yellow, then with Menoth White Highlight. I also start on the green glow of the eye by putting a nice big dab of Necrotite Green right there in the socket and blending it out into the surrounding skin. then the eyeball itself is painted with Gnarls green, and highlighted up with more Necrotite. 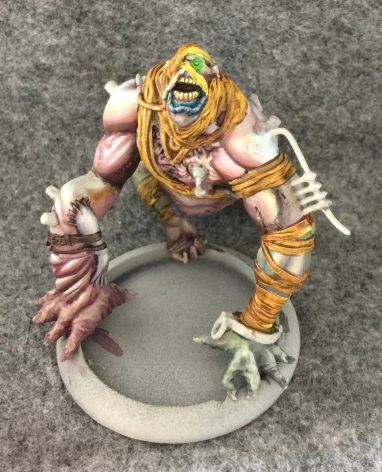 Then I begin on all the bandages. I choose Sulfuric Yellow for the color, since yellow is another color that hasn’t really been used on the model. This is given a wash of Agrax Earth – although I probably could have skipped this step. The point of the wash was, obviously, to define each strip of bandage. By the time I was through though I ended up painting over nearly all of it 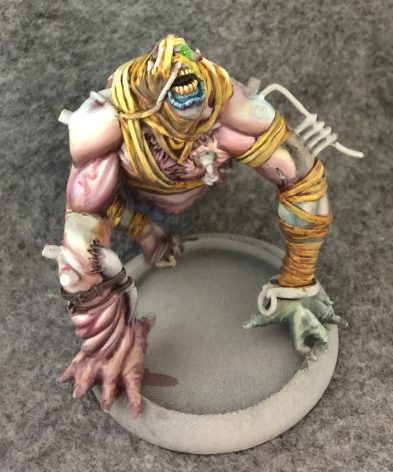 Next I begin defining all the bandages. Things like this can be tricky since you have to worry about defining each strip of bandage, while also taking into account how they’re highlighted and shaded as a whole. 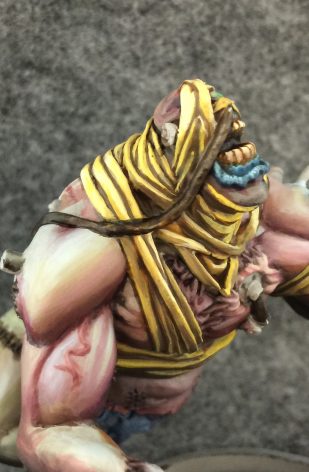 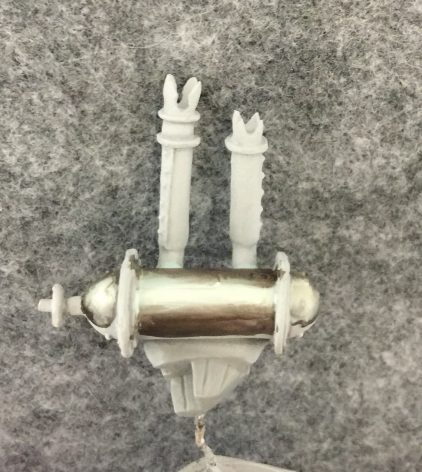 Next is the boiler. I kept this piece separate and pinned it to an old paint pot to make painting it easier. I went for some pretty stark contrasts on the metal here. I started with a mix of Bloodstone and Thamar Black highlighted with a thin streak of Underbelly Blue. An even thinner line of Menoth White Highlight is added down the middle. 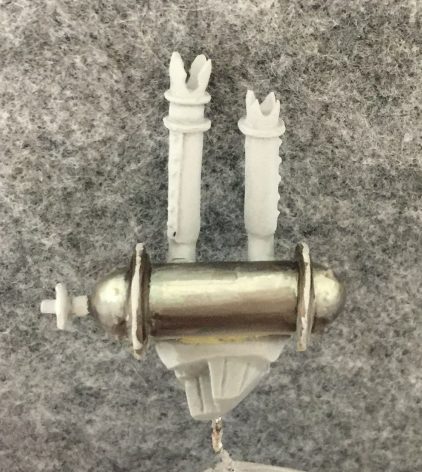 I clean up the initial highlight some, and continue the process in the surrounding area. 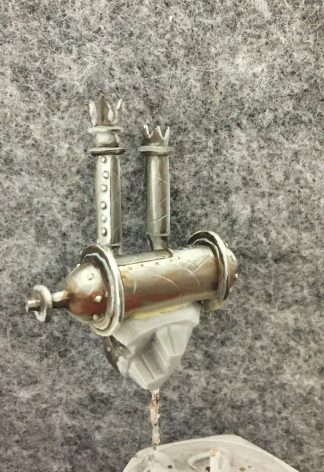 Once I get everything as I like it, I stipple on some very watered down Bloodstone in some of the darkest areas to create the impression of rust, and also just add some color. Then I add some scratches by painting on thin streaks of Underbelly Blue with a thin line of the Bloodstone/Thamar mix right above them. 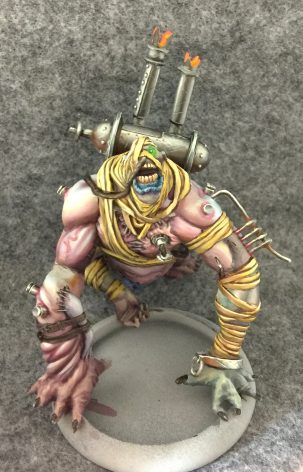 I use the same metal technique on all the bolts and other metal pieces on this guy. I stipple on a little Sanguine Highlight “blood” wherever these pieces contact the skin. I also added a little glow inside the smokestacks with Khador Red Highlight and Cygnus Yellow. 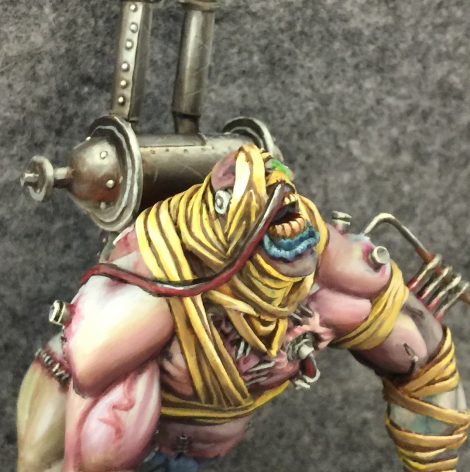 I made one final touch to the smokestacks at this point, giving them a wash of Agrax Earth just around the base to taper the highlights a bit. The highlight strips looked just a little too uniform before. Then I move on to the tube in the nose. I’m trying to go far the appearance of a clear tube filled with blood. A basecoat of Sanguine Highlight mixed with Thamar Black is blended down into pure Sanguine Highlight. Then a thin highlight Underbelly blue goes across the top side of the tube to represent a shiny reflection. 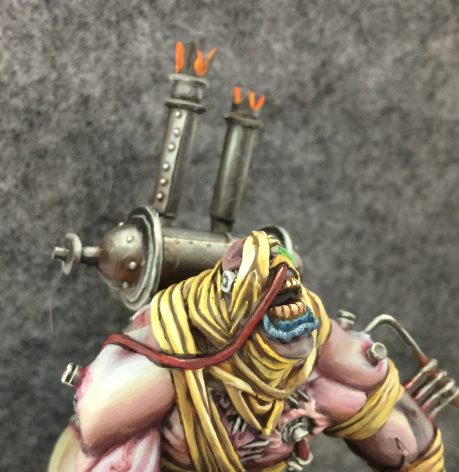 Since the initial highlight was a little too stark I give the tube a wash of Red Ink to reign it back in.

And there you have it. 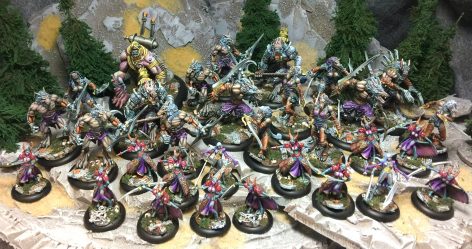 With this final model finished, my Goritsi army is ready to hit the table.

~Hope you enjoyed the article. I have already begun on my next Wrath of Kings army: Nasier.

Author: Ben Williams
Ben Willimans is a Professional Painter and Columnist at Bell of Lost Souls. He has been involved in the hobby and art side of miniatures and the tabletop gaming industry for over 20 years. He has won multiple national painting awards.
Advertisement
CoolMiniOrNot Miniatures Painting Wrath of Kings
Advertisement