Today Loremasters we delve into the seat of the Emperor’s power – the Imperial Palace of Terra.

The Imperial Palace is a vast edifice sprawling across a large part of the Asian continent on Terra, divided into the Inner and Outer Palaces. The Palace is built to truly monumental proportions; seen from orbit, it consists of connected kilometres-high monolithic and pyramidal structures, marked with landing pads and studded with defense weaponry. The palace itself is the seat of the Adeptus Terra, but is overseen by the Adeptus Custodes.

Construction of the Imperial Palace began after the Unification Wars as a symbol of the Emperor‘s might and a monument dedicated to mankind’s new unification. Based around the Himalazia mountains, the Palace was designed by the most expert artisans of the many Masonic Guilds of Terra, but the defenses were overseen by Primarch Rogal Dorn, much to the frustration of Perturabo. Some construction of the Palace was still taking place by the end of the Great Crusade, meaning construction took at least 200 years. 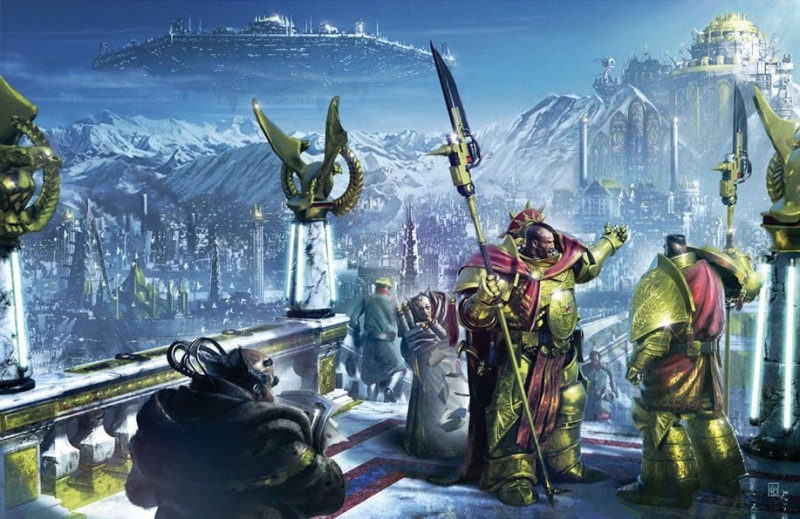 On the outskirts of the Palace rests the massive Titanoliths of the Investiary, monuments to the Primarchs and Space Marines.

The Imperial Palace is as heavily urbanized and populated as any hive city. Adepts numbering in the billions work and reside within the Palace. The Outer Palace is also heavily urbanized by a population of destitute non-adepts. The Adeptus Custodes maintain a constant vigil over the Imperial Palace, and are among the few permitted to pass beyond the Eternity Gate into the Emperor’s presence. The Adeptus Arbites are responsible for maintaining order and vigilance within the Outer Palace, especially outside official buildings which are often thronged with the queue lines of those seeking employment within the Administratum. Shock troops quickly put down the vicious queue riots that occasionally erupt.

The Palace is the heart of the Administratum. Countless souls labour in the immeasurable archives and headquarters of the Imperium, ordering and maintaining an empire that spans the galaxy. Without them, the Imperium would lose all access to its history and databanks. Also, it is the seat of the High Lords of Terra, who are charged with interpreting the Emperor’s will. These twelve Lords are accounted the most powerful of all living men. They guide the overall strategy of the inexhaustible armies of the Imperium, and uphold the Emperor’s might across a million worlds.

Entrance to the Outer Palace is achieved by two major gateways. The Lion’s Gate, home to a major spaceport and overlooking the Indian Subcontinent. The other major gateways are the Primus Gate and Ultimate Gate. A fourth major gate, the Annapurna Gate, existed prior to the Battle of Terra but was dismantled by Rogal Dorn for defensive reasons. 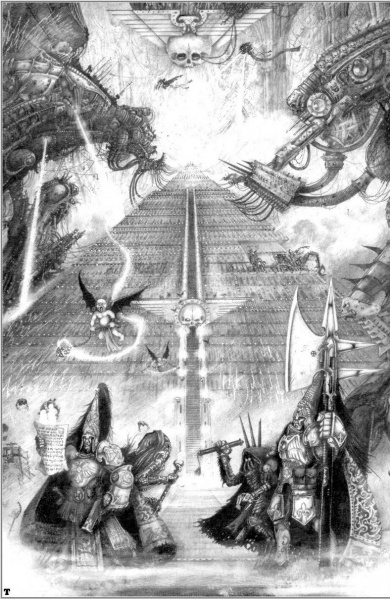 The Inner Palace, the Sanctum Imperialis, is the massive throne room at the heart of the Palace built over the ruins of Kathmandu. The section of the Palace is where the arcane machinery comprising the Golden Throne keep the Emperor’s few living cells alive, providing an anchor point in the warp for his mighty spirit. Tech-priests of the Adeptus Mechanicus constantly maintain the vast Golden Throne. Along the walls of the Throneroom are thousands of outlets connected to the Golden Throne which are inserted with coffins holding a psyker. These serve to initiate the thousand daily sacrifices to keep the Golden Throne operational. In an arena before the Emperor himself, psykers are soul-bound for Imperial service as Astropaths. Standing before the Inner Palace is the massive Eternity Gate, forged of the strongest materials. Two Titans from the Legio Ignatum stand guard over the Gate in its damasked beauty and immeasurable strength.

When the Emperor walked among mortals before the Horus Heresy, his frequent residences included the Inner Gardens (a peaceful sanctuary of flora and fauna) and the Hall of Leng, a place of chronological distortion where it is said he measured the angles of space and time.

Also inside the Inner Palace is the Hall of Victories, a private museum of some of mankinds greatest technological accomplishments. It includes shards of the first clay pot made in antiquity, the Mars Rover, a circuit board from the first Warp Drive, and a tube with the “Mendelian Eukaryotic Genesis Formula”, which allowed for the first cloned human.

Other areas of the Palace include the Great Chamber of the Senatorum Imperialis, the Tower of Heroes (which contains the Bell of Lost Souls), Bhab Bastion, Investiary, Great Observatory, Hall of Weapons, Hall of Glories, the Sigilite’s Retreat, the Shrouds, City of Sight, the Pillar of Bone, and Tower of Hegemon.

Learn More of the Imperial Palace

~ Do you think Abaddon can break the Palace a 2nd time?