This week: a kobold in need is a kobold with delusions of grandeur that the PCs can be unwitting tools of indeed.

The sun begins to set, burning the sky as it is chased off by the oncoming night. Gathered around their campfire, the party rests from the adventures of the previous day, taking the time to nurse their wounds and portion out their latest treasures. Then a shadow falls across the fire–it is Kirtaak the Great, Lord of Dorganath Barrow, Master of Myriads and, lately, Chieftain in Exile.

This adventure hook can be used for players at any level. Just follow the guidelines listed below for level-appropriate encounters.

At the end of a long and hopefully heroic day’s work, as the PCs set up camp to take a long rest, they are approached by Kirtaak the Great, a mighty ruler. Garbed in armor fashioned from the hide of a dragon, wielding the scepter of an ancient ruler, and cloaked in all the majesty befitting one of his mighty stature, Kirtaak the Great has determined that the PC’s heroism makes them perfectly suited to the task of reclaiming his birthright.

Assuming he gets a chance to talk to them, that is. 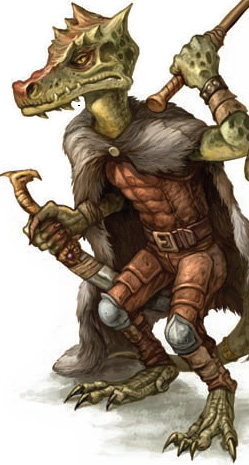 Kirtaak the Great is a  kobold chieftain who claims he has been ousted from his kingdom by a terrible, dire threat. Having seen the PC’s in action (or perhaps having tangled with them before) he’s turned to these mighty heroes to try and reclaim his birthright in exchange for treasure worthy of such heroes and the favor of his kingdom, once he has been restored to its throne.

The party will have to take care of a few things first, though. Namely, sorting out fact from fantasy–Kirtaak has a very high opinion of himself and will no doubt exaggerate the size of his kingdom, not because he’s willfully lying, but because he genuinely believes it to be mighty.

They will also have to find his kingdom, because Kirtaak has no map of the place and doesn’t know where it is. “Carry my own map? That’s what map bearers are for.” “I’m a great king and conquerer, not a place-knower,” etc. This is a great opportunity to lead the players through whatever terrain happens to be nearby. Got some adventure seeds you need planted? This EPIC QUEST FOR GREATNESS is the perfect chance to sow them.

Upon their arrival at Kirtaak’s kingdom (see below), the players must deal with whatever is there and restore Kirtaak to his throne. From there, Kirtaak might betray them (not out of malice, but because kobolds are used to everyone turning on them), or not, depending on how the players have treated him. Either way, he’ll offer them their reward (see below) and if he lives at the end, they’ll have his undying loyalty. For better or worse.

This can be either a quick adventure, or you can use it as a thread to connect one part of a larger adventure to another. I’m a firm believer in recurring foils and transitions and things that make the world feel a little more consistent. Kirtaak can function as one of these. With his little quest giving you an excuse to show off more of the world/adventure. This can also be a good way to ease off some of the tension if things have been getting too serious or tragic in your campaign.

Read below for more details, or skip to the end if you just want those sweet stats and to figure out your own way of threading this adventure together.

Kirtaak approaches the party when they’re resting up for the night. He makes every effort to seem majestic and mighty, despite having no idea how to do either of those things. Kirtaak is not there to attack the party, but if your players wish to shoot and loot, his stats are listed below. In the event of a combat, Kirtaak will use his first action to attack the party, trying to get a double attack on a PC. With his second action, he will immediately surrender and plead for his life.

If the players agree to help him, they’ll need to figure out where exactly his kingdom lies. A DC 7 Wisdom (Insight) check will let players catch on to the fact that Kirtaak doesn’t actually know where he’s going, despite his extreme confidence in his ability to get them to his kingdom.

We were in the forest just a minute ago…

This section is a chance for PCs with wilderness skills to shine. A successful Intelligence (Nature) check (use appropriate DCs) might help players identify any landmarks Kirtaak can recognize. A successful Wisdom (Survival) check will help players track where Kirtaak has been, so they can figure out where he’s from.

If all else fails, wandering for a couple of nights in the wilderness (during which you can sow some seeds of future adventures. Need a town destroyed by a giant? Have them pass through. Rumors of evil elemental cults? Hey why not find traces of them. I am a firm believer in using one adventure to lead to another, and that’s kind of what this one is for. 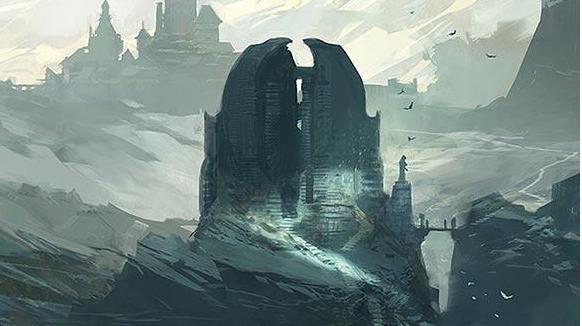 At last, the heroes arrive at Kirtaak’s stronghold and face off with the terrible threat that has pushed him from his throne. Kirtaak’s kingdom, it turns out, is an old dilapidated temple. The icons have long been faded and its altars ruined–all save one. As the players approach they’ll see lights flickering in the ruins. A cult, bent on restoring the ancient temple has taken up residence there. Their leader has no idea that they have driven out Kirtaak. Nor do they know who he is. Or why the PCs are there. The whole thing is very vexing to them, when their ritual is interrupted.

Players can sneak through the ruins, and, at Kirtaak’s urging can rescue his “loyal subjects,” who are hiding out in empty chambers. Succeeding on a DC 14 Dexterity (Stealth) check will let the PC’s rescue some of Kirtaak’s subjects. These can be: a flaming skull that Kirtaak has tamed and de-gemmed. (Use normal flaming skull stats, but it can only cast fire bolt), a docile intellect devourer (couldn’t quite make a meal of Kirtaak’s brain), or 1d10 + 3 kobolds. Any or all of these might assist in the fight.

After freeing the subjects or not, the PCs have the “cult fight” encounter (see below) and then are awarded with a powerful treasure and Kirtaak’s undying loyalty, whether they want it or not. If the PCs attacked Kirtaak before, however, he might try and have his followers ambush them, believing the PCs might betray them. If combat breaks out, Kirtaak uses his first action to attack, then immediately surrenders, as per usual.

Having disposed of the cultists, Kirtaak immediately sets about having his subjects tear down whatever their altar was (a DC 15 Intelligence (Religion) check reveals it to be an altar to Asmodeus) and fishes out a “statue” of himself. A broken gargoyle (not the monster) that, if you squint, looks kind of like him.

The players are rewarded with “a great treasure” that actually turns out to be worthwhile. Hidden in the ruins, Kirtaak has been hoarding what gems he could find (approximately 1,500 gp worth) and offers them to the party, as well as: a scarab of protection, a trident of fish command (“all fish are already my subjects, I have no need of this”), and/or a ring of animal influence.

Alternatively, if you are using this to lead PCs from one part of an ongoing campaign to another, feel free to substitute the accidental cult disruption for something that is more relevant to you. If you’re playing Storm King’s Thunder, this could be a good way to lead players to one of the towns beset by giants, or what have you. Adventures are full of hapless stumblings that lead to something greater, and this is one you can use at just about any time.

Kirtaak could easily be used again. If the PC’s helped him reclaim his throne, he promises to never forget what they’ve one. His kingdom could grow (after a fashion) and be a source for more adventures/threats/problems later on.

Sunlight Sensitivity: While in sunlight, Kirtaak has disadvantage on all attack rolls, as well as Wisdom (Perception) checks that rely on sight.

Pack Tactics: The kobold has advantage on an attack roll against a creature if at least one of the kobold’s allies is within 5 feet of the creature and the ally isn’t incapacitated.

Scepter: Melee Weapon Attack: +4 to hit, reach 5 ft. Hit: 4 (1d4 + 2) bludgeoning damage and the target must succeed on a DC 12 Wisdom saving throw or be affected by a fear spell. Targets struck by the Dragonblade have disadvantage on this save.

Treasure
Dragonblade: Kirtaak’s “dragonblade” is a short sword with a bat-winged hilt that has the word DAGRONBLADE etched into its side in crude draconic runes. It smoulders with dull flame.

Scepter: Kirtaak’s “scepter” is a wand of fear that has been broken from repeated use as a bludgeon. It sparks when swung, and seems to work better when paired with the Dragonblade. Against all odds.

Dragonscale armor: This appears to be dragonscale armor. From a distance. An Intelligence check, DC 5, will let the player spot that this is actually made from the hide of an elderly dragonborn. A survival check DC 7 reveals that it had scale rot, and likely died of that long before Kirtaak claimed it.

Feel free to pick an encounter that is suited to your PC’s general level. I’ve provided ones for levels 5, 10, or 15ish.

A mage, two acolytes, a cult fanatic, and 2-3 cultists per player.

Three mages, a priest, two acolytes, and 2-3 cultists per player.

An archmage, two other mages, a priest, and 4-5 cultists per player.

So whether you’re looking for something to take up a session, a segue into the next part of your campaign, or both–consider Kirtaak.

Want to see more adventure hooks like this? Got other suggestions? Leave ’em below.